Origami: How complex could it be?

How complex could it be?

About ten years ago I learned that origami is not just the few basic models that I have known since childhood but is a developed and sophisticated art form, with history, traditions, trends and movements. For me, it is not only an art form but a science, as well. It seems that part of enjoying origami is understanding its mathematical side. During my studies of mathematics, I learned about the logistic function model, which is used to describe growth processes of complex systems. The model was described by P. F. Verhulst during the first half of the 19th century, and it suggested that many processes can be described and predicted by a relatively simple function. It is characterized by an "S" shape or sigmoidal curve. Growth usually begins with a rapid exponential trend which slows and converges to saturation, where growth stops.

This approach indeed could be a way to describe the increase in complexity of new origami models. It is commonly known that following Yoshizawa and the invention of diagram instructions, many new complex origami designs were developed, which became more complex with time. It also was observed that this development reached its peak during the ‘Bugs War’, in the early 1990s. Currently, it seems that complexity is no longer the priority of newer designs. This point of view can be expressed in numbers where the complexity level can be defined as the number of steps required to fold a model. The hypothesis was that origami complexity has increased rapidly since 1960s but may have reached a plateau. If so, the data should be consistent with the logistic curve: an exponential growth reaching a certain point at which the rate of growth decreases until it reaches a ‘steady state’. In other words, has the complex genre reached its highest peak?

Initially, the number of steps for each model was counted, taking into account some factors:

1. Some diagrams assumed prior knowledge, such as preliminary base, without an explanation of how to fold it. Other diagrams had multiple actions at one step such as “repeat on the other side”.

2. Modular models were left out because they are usually simple or intermediate and their number of steps doesn’t reflect their actual complexity level. In this research the data were collected according to the year and the place of publication, since a model’s inclusion in a publication represents its relevance to a particular origami event at that time. Concurrently, the models are related to the date of the publication and not that of the creator.

The next step was to calculate the average and the maximum number of steps in each respective year for each data set: JOAS, BOS and OUSA. Six sample groups were generated (three for average and three for maximum numbers) in total. These groups were used to test the hypothesis. Mathematical modeling was done using the Loglet Lab software package (version 4), and an envelope function was sought to describe the maximum complexity curve.

Presented here are two logistic curve graphs that were produced for the OUSA database. In both, maximum and average values of the S-shaped line can be seen clearly. Each dot represents year sample. Height of the dot is number of steps. There is exponential growth at the beginning, from 51 up to 280 for maximum values and from 16 up to 54 for average values. In both graphs you can see that there is no growth after 2010. For maximum values the decrease started even earlier, in 1998.


Logistic curve of maximum values vs year of publication for OrigamiUSA sample.

Note for the graph above: Out of all the data, the filled dots represent the included years in the envelope function. 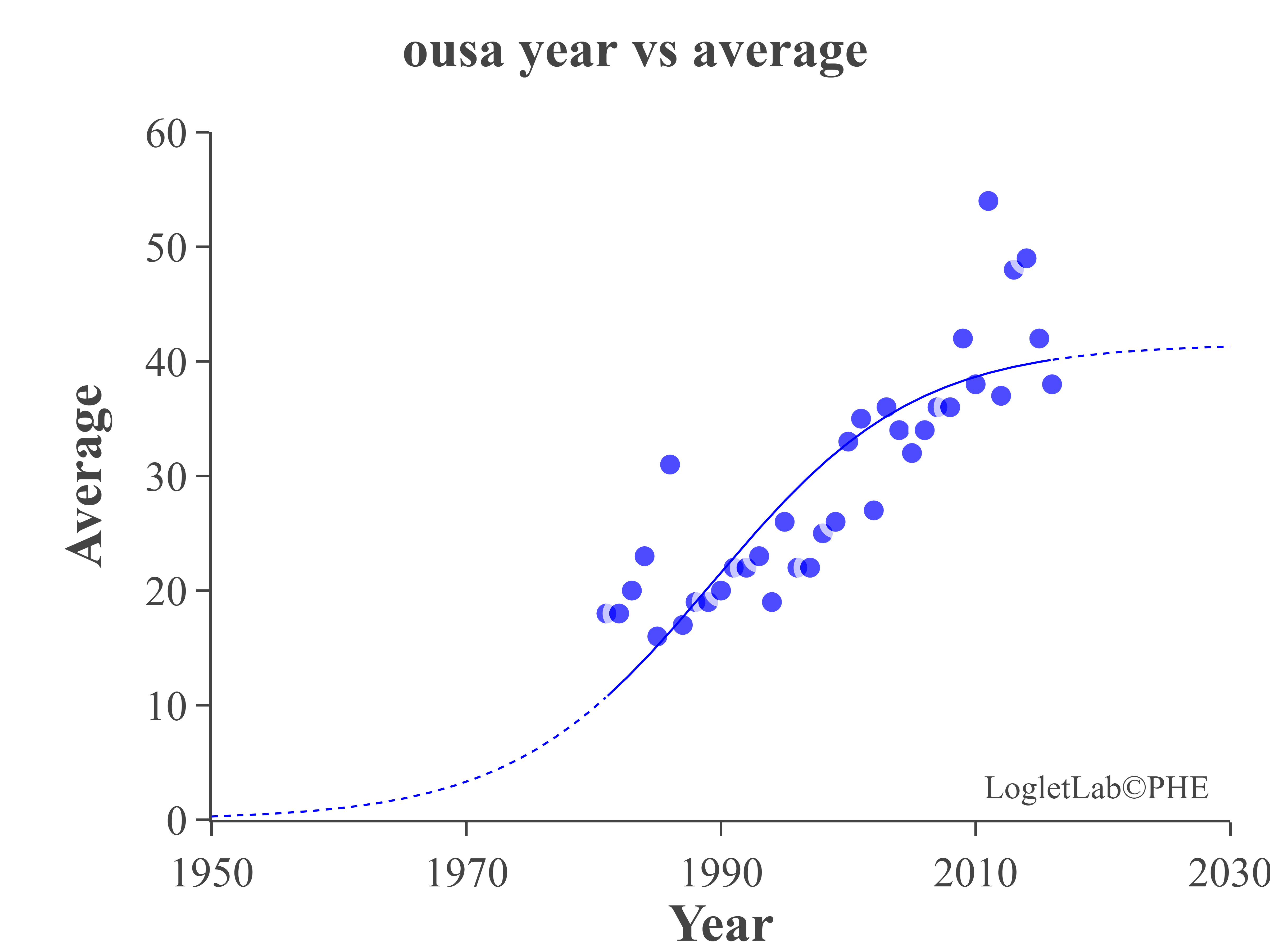 Logistic curve of average values vs year of publication for OrigamiUSA sample.

The next two graphs provide a visual comparison of the results. One can easily see the difference: Japan adores complex models, with maximum values at the 400s, while OrigamiUSA doesn’t exceed 200, and the BOS is even below that. The same result is shown in the highest average value of Japan, and how it increased during the years (from 50 steps in the year 1995 to almost 100 in 2012). Both OrigamiUS and BOS are way below that, although the numbers do increase as well. 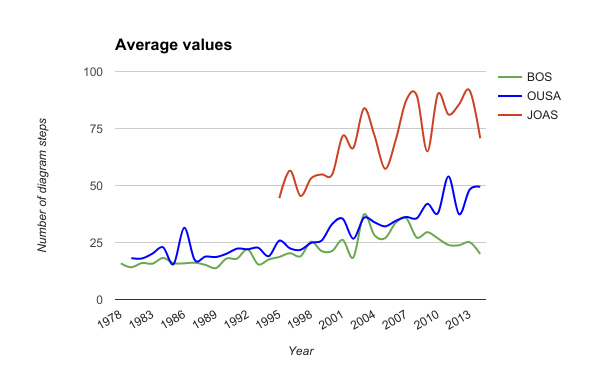 Average values vs year of publication for OUSA, BOS and JOAS. 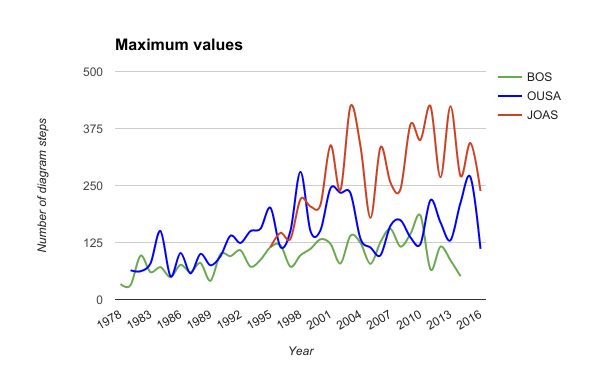 Maximum values vs year of publication for OUSA, BOS and JOAS.

The purpose of this study was to examine whether the level of complexity of origami models has been on the rise in recent years or perhaps “complexity peak” is already behind us. It was estimated that the complexity level of current models is not much higher than 20 years ago, and its growth rate has decreased. It seems clear from these results that in all cases the “S” curve has completed its trajectory, especially, in the ‘max’ Tanteidan dataset. These findings support the hypothesis of the study that exponential growth has stopped and growth rate is decreasing. Additionally, the data suggest that the process of increasing complexity has saturated, all samples reached 90% growth by 2008.

Given that the examined data span 37 years of intensive origami creation, we can conclude that the growth in complexity of origami diagrams has stopped, which can be interpreted as a reduction in complexity level of new origami models.

This may be the outcome of the definition of complexity used here. However, it may be the case that a comparable model can be prepared using various methods where each one will have a different number of steps. If so, the results of the study can be interpreted differently as the lack of an increase in the number of diagram steps in recent years is being offset by an attempt to simplify the models, thereby increasing the originality of the artists. This ability of abstraction may yet see an increase in the level of efficiency of the creator who is able to produce a simpler result while still progress as an artist.

This paper presents research conducted during my mathematical studies at Ohalo College (Kazrin, Israel). It was supervised by Dr. David Burg from the Shamir Research Institute (University of Haifa, Israel). It was based mainly on papers by Dr. Robert Lang, David Lister, Koshiro Hatori, and Sherry Gerstein.

My thanks to Dr. David Burg, my research supervisor, for introducing the rich and interesting fields of knowledge; Dr. Saadya Sternberg, Ilan Garibi, Gadi Vishne and Ben Goldberger, my origami friends, for help and advice in building hypothesis for this study and insights about its results.