Paper Treasures From a Treasured Friend

When Patsy Wang-Iverson and Wendy Zeichner were fulfilling Laura Kruskal’s longtime dream of publishing a book of her original origami models, I told Patsy the story of the set of origami hina dolls that Laura brought back for me from Japan. Patsy was not familiar with hina dolls, so she asked me to write about them.

Laura’s husband, Martin David Kruskal, a mathematician and physicist, was often invited to collaborate with other scientists at universities around the world. Before one of Laura and David’s trips to Japan, I mentioned to her that I would be teaching a class on “Origami as a Window to Japanese Culture.”

She passed on this information to one of her Japanese hosts, who gave Laura two amazing sets of handmade origami hina dolls — one set for Laura and one for me. All 15 dolls in the set were enclosed in a traditional origami tato (a flat, self-closing container). Its hexagonal shape represents the tortoise, an auspicious symbol in Japan. 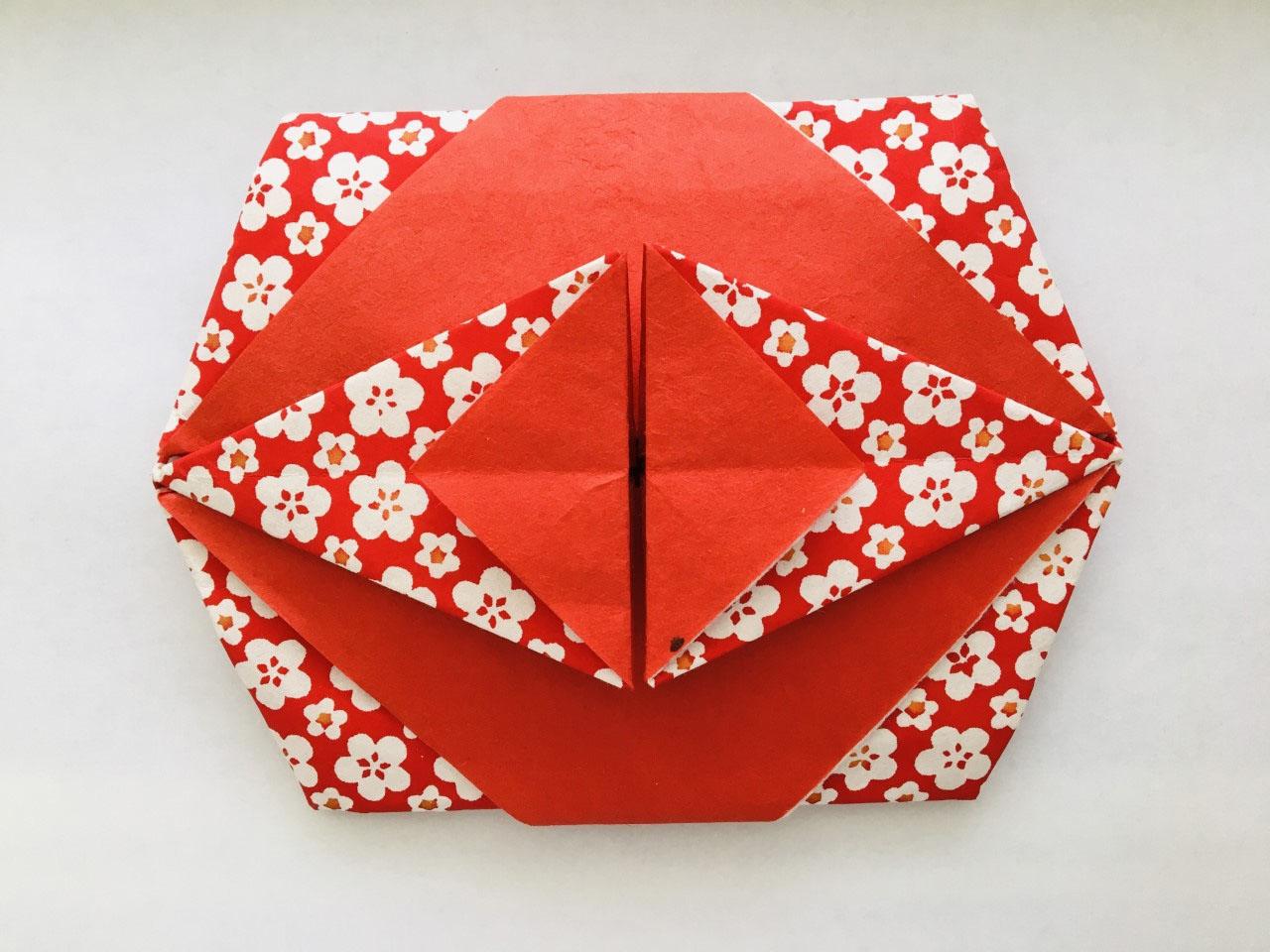 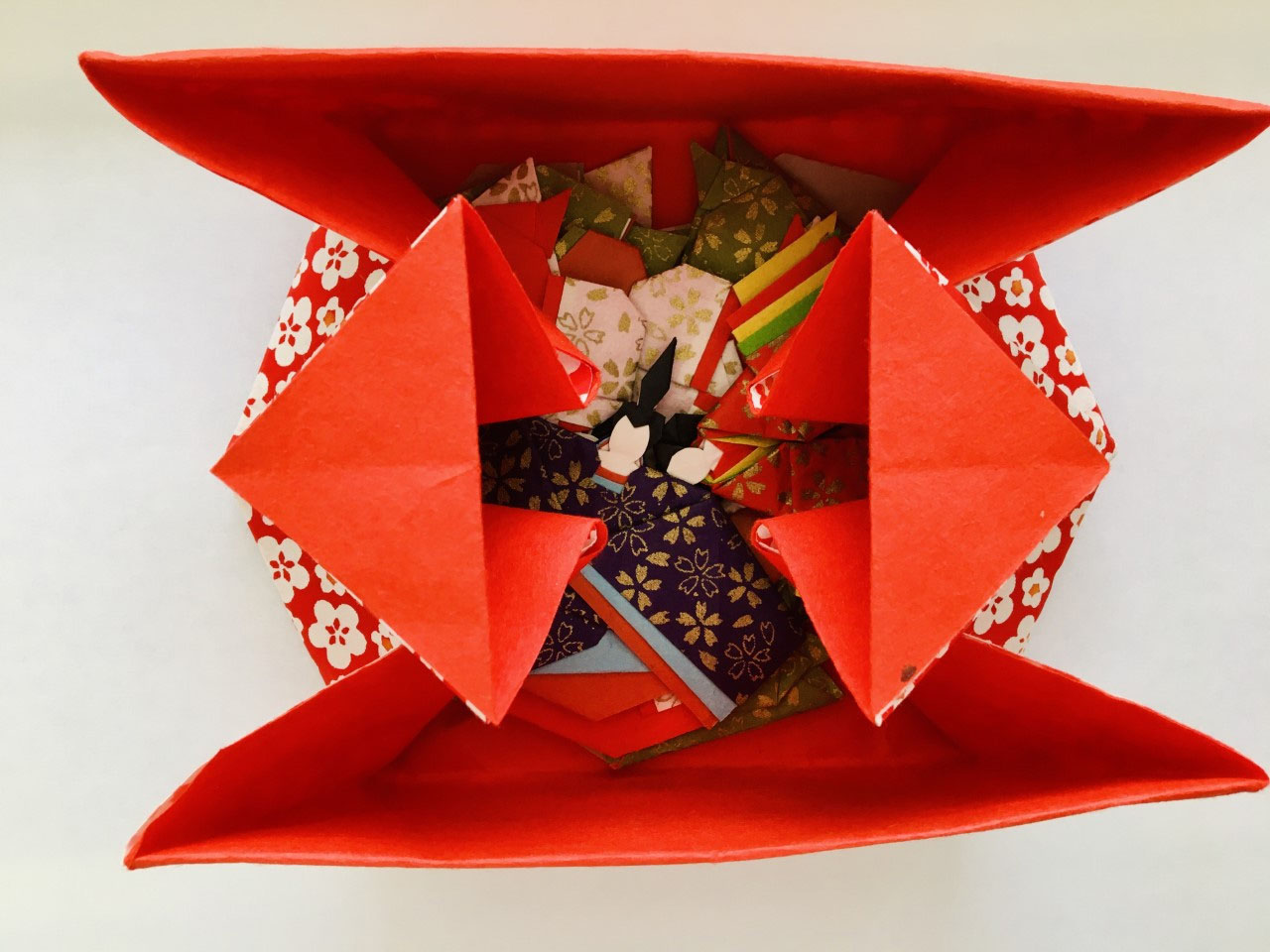 In the Western world, royalty often wear crowns. But in Japan, the traditional attire of the emperor and empress is quite different.

One of the traditional Japanese festivals, Hina Matsuri, also known as the Doll Festival or Girl’s Day, is celebrated annually on March 3. Girls around the country display their set of hina dolls on a multi-tiered stand that resembles a red staircase. A royal couple, sometimes referred to as the emperor and empress, are at the top level, and members of their court are on the lower levels. The emperor and empress: 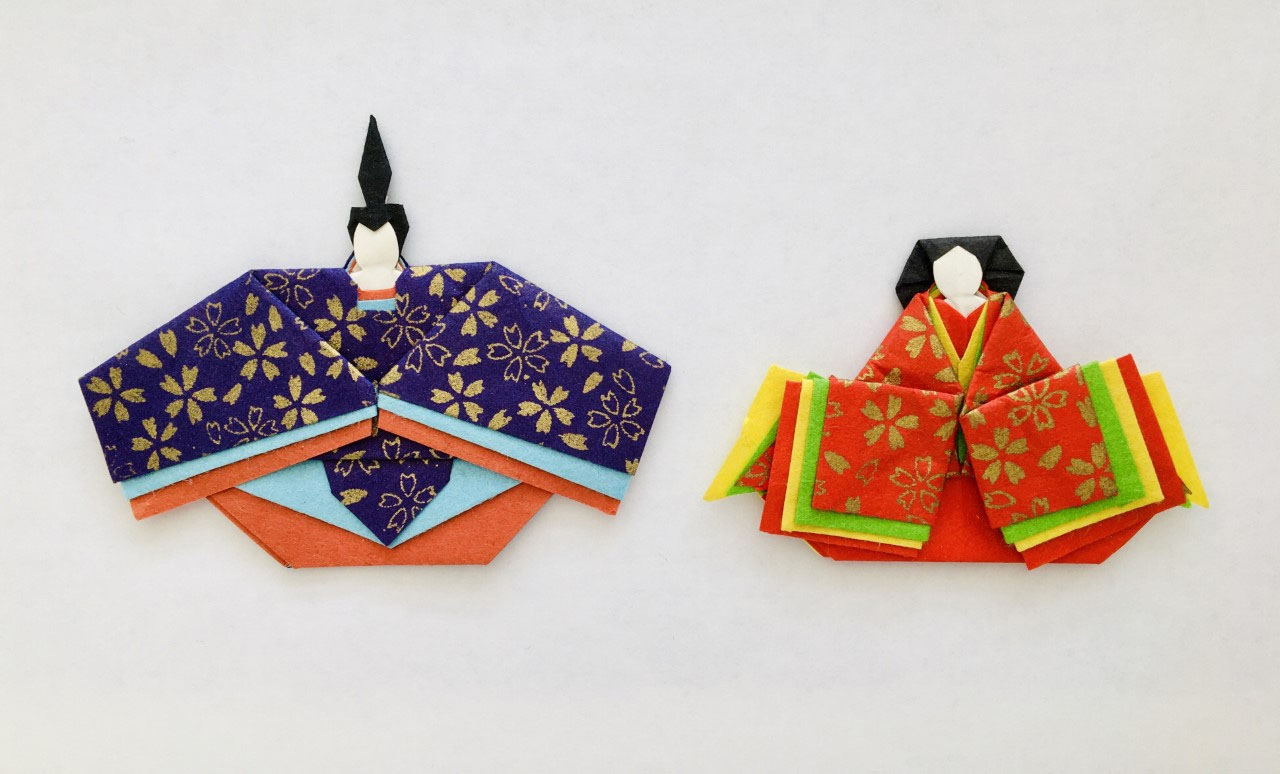 On the next level down, three ladies of the court are displayed. They wear traditional court dress of the Heian Period (794 to 1185), as do all the dolls. 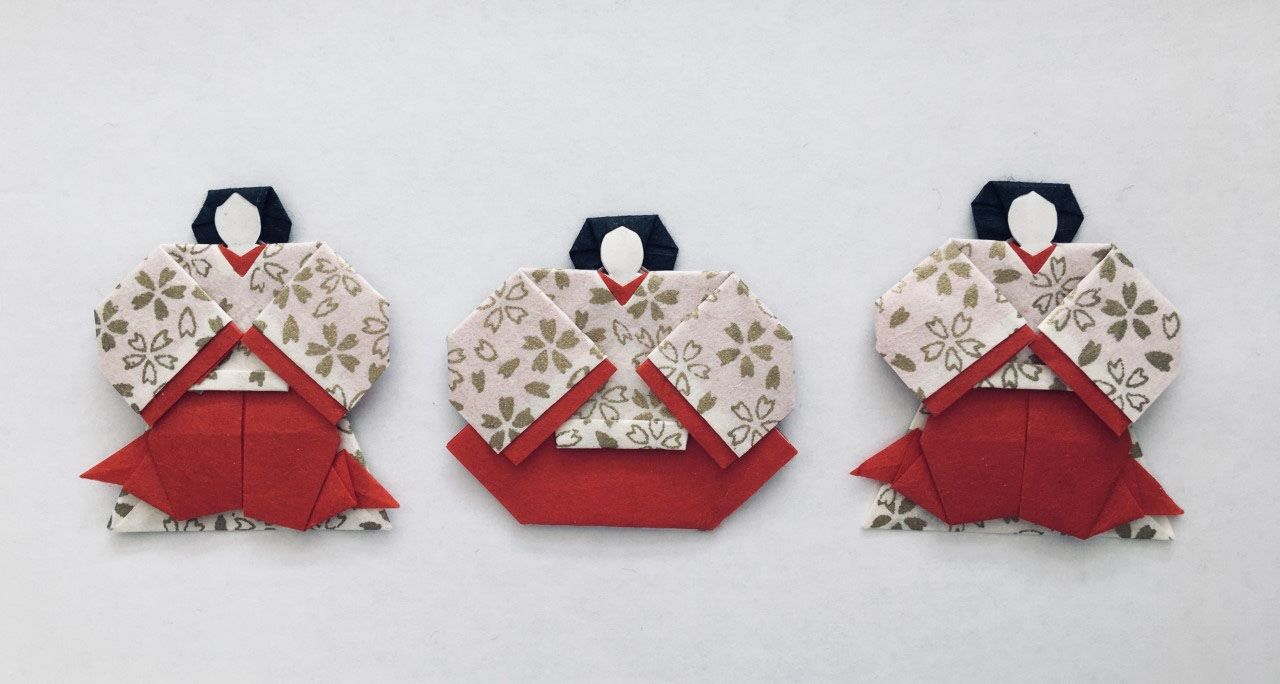 On the next level are five musicians, 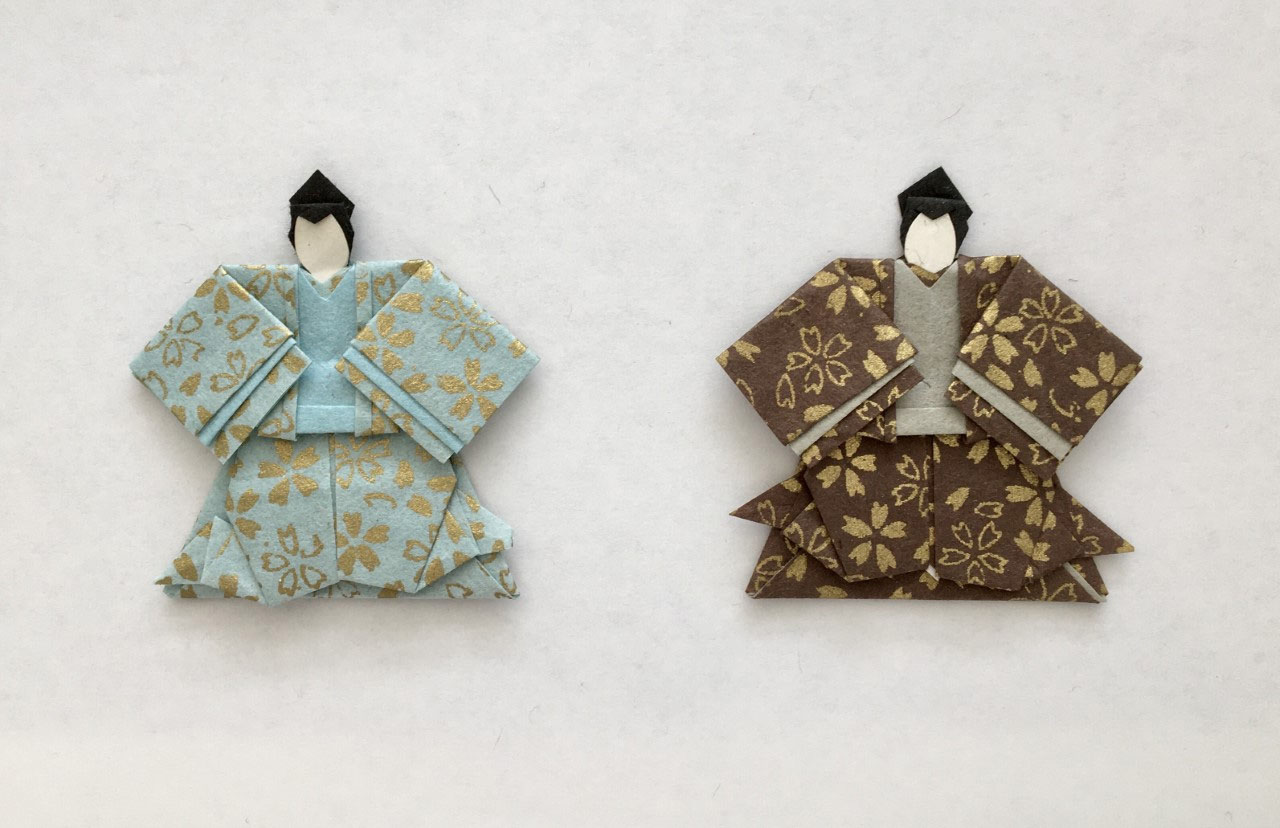 When Laura gave me this gift, I was stunned, knowing firsthand, how much skill and time it takes to make one doll, let alone a complete set. It shows how endearing people found Laura, after meeting her for just a brief time.

While most hina dolls are found in expensive purchased sets that may be made of wood, ceramic and fabric, many origami designers, including Toshie Takahama and Kunihiko Kasahara, have created origami versions similar to the set Laura gifted to me.

In 1990, Ruthanne Bessman taught me how to make one of Toshie Takahama’s versions of the obina (emperor) and mebina (empress), and she brought a gift from Toshie, her version of the royal couple, also in a traditional origami tato, folded by Toshie Takahama herself. 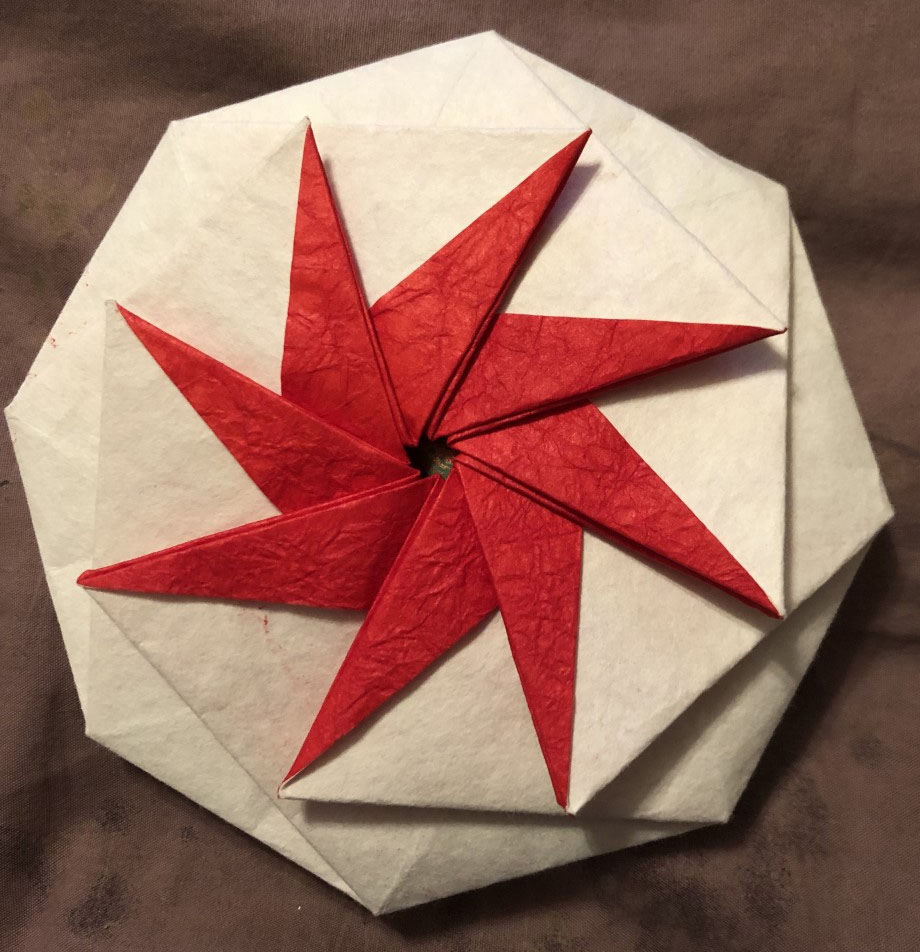 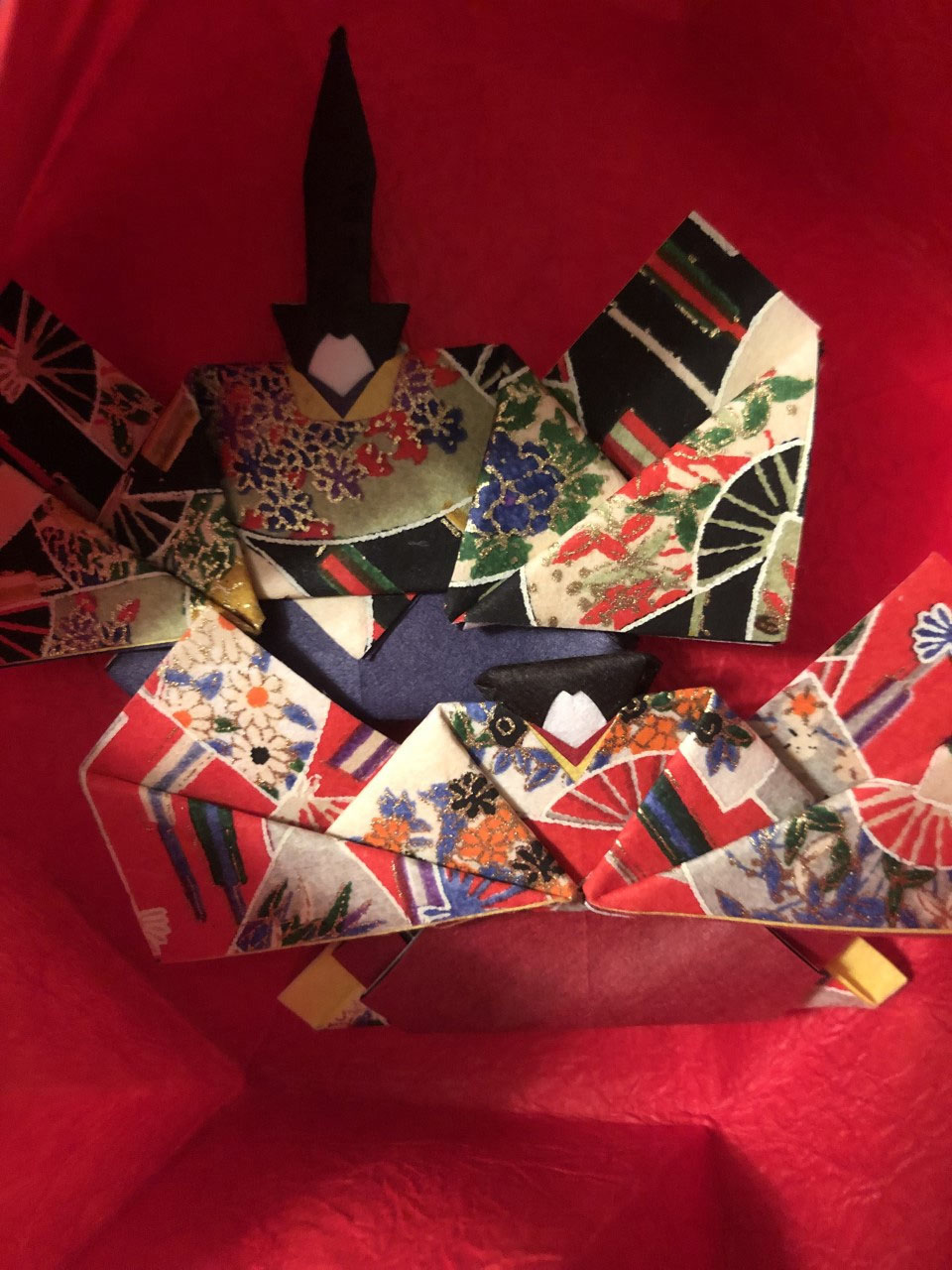 Ruthanne made a beautiful set of Toshie Takahama’s version of the hina dolls, and displayed them at the New York City OrigamiUSA convention in 1991. 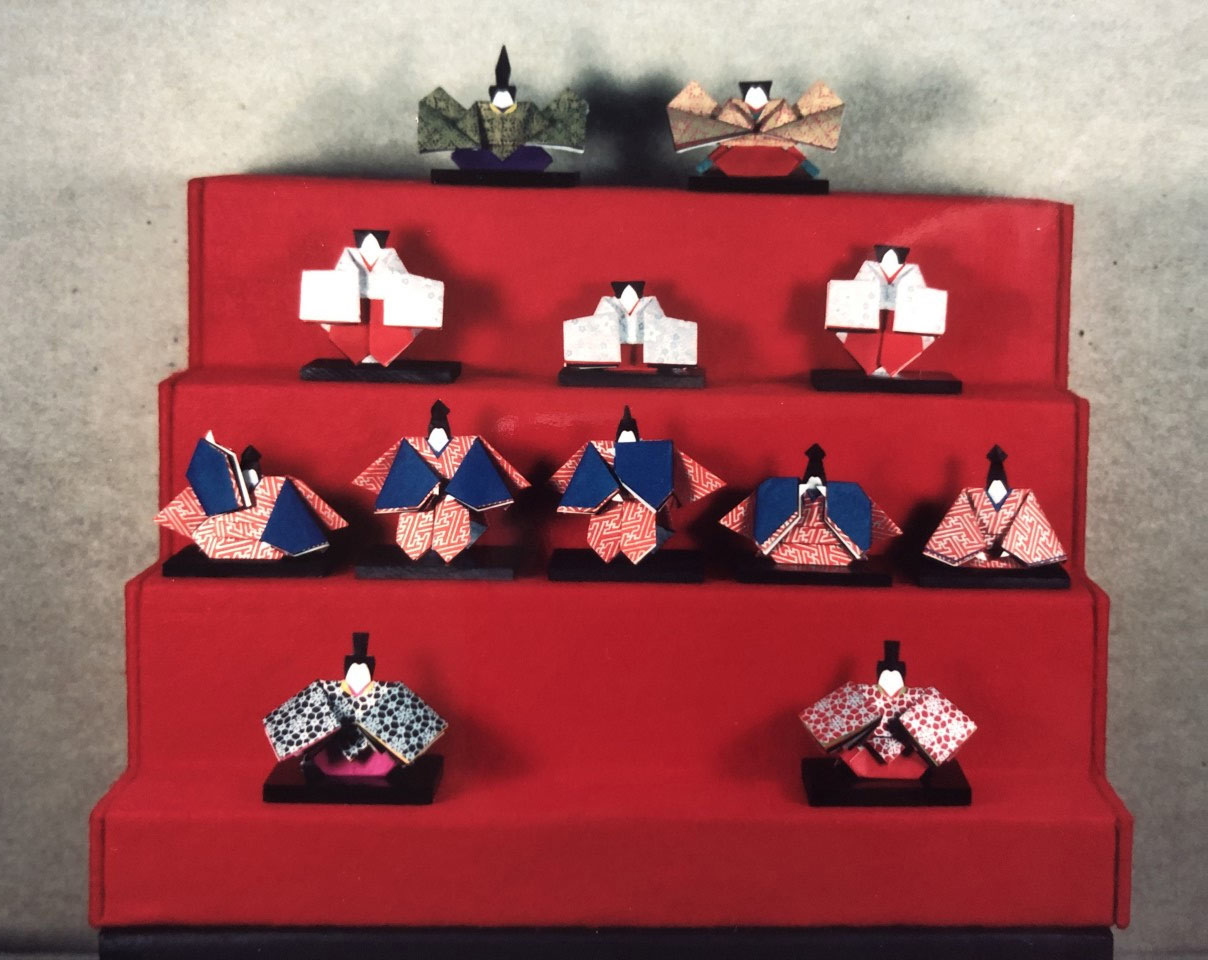 Here is an exquisite example of a more elaborate version of the emperor and empress designed by Toshie Takahama and also folded by Ruthanne Bessman. 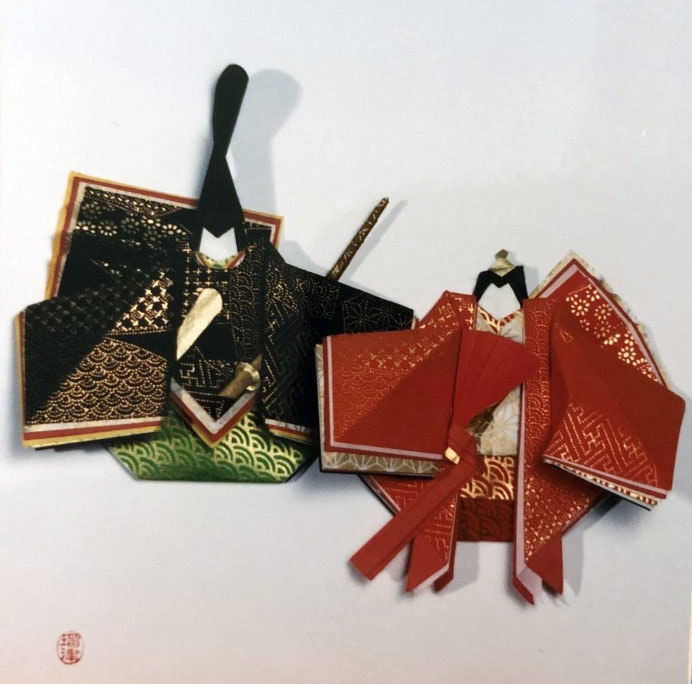 If you would like to make your own emperor and empress hina dolls, you can find instructions in the book “The New Origami” by Steve and Megumi Biddle (St. Martin’s Press/Griffin: 1993, pages 98-105).

Origami hina doll sets do not have to be elaborate. I decided that the set of dolls Laura gave me was too precious for it to leave my home. So I made a pop-up-card staircase and created my own mini set of dolls using variations on simple origami doll figures that I found in Japanese books and magazines. 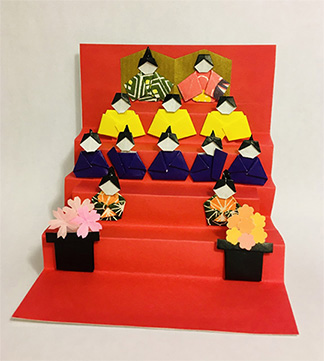 When the card is collapsed it is 3 by 3½ inches, and each doll is approximately ¾-inch high, making it very portable. 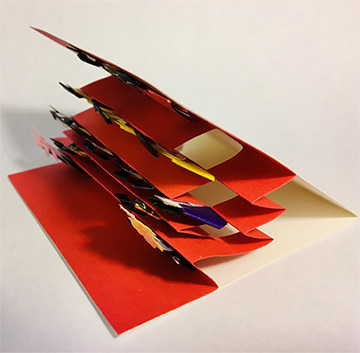 When Tricia Tait attended a Dutch convention, one of the attendees from Japan taught her how to make a mini-set — just 1¾ by 2½ inches! 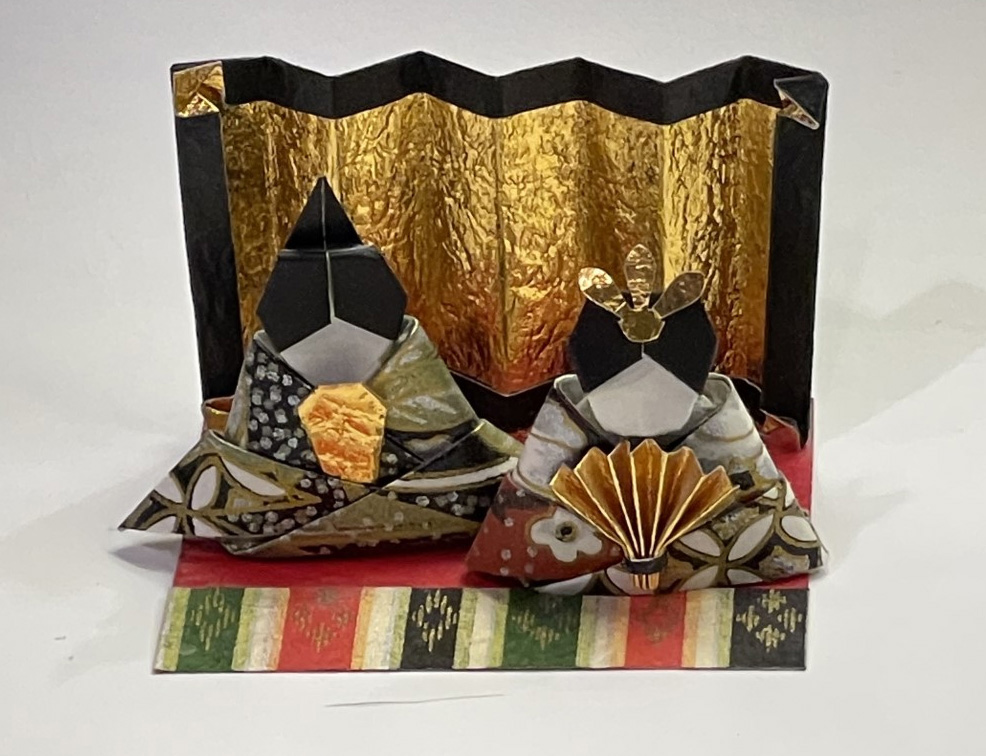 After helping me with this article, I think that Patsy now is quite familiar with origami hina dolls.

What a delightful article! Thank you!

What a wonderful article. I'll definitely need to pull out my copy of Steve and Megumi Biddle's book!