This article was originally written in Japanese and published in Issue 135 of the Tanteidan Magazine. The Japan Origami Academic Society (JOAS) has graciously given The Fold permission to reproduce this content, which has been translated into English. Please thefold [at] origamiusa.org (let us know) if your organization would like to collaborate with The Fold in the future, or if you'd be interested in helping with future translation projects!

For all of us from outside of Japan, we could only but to follow the tragedy that took place in March of last year by watching the news on the TV. The images showed a 8.9-magnitude earthquake and tsunami that devastated the northeast (Tohoku) region.

Now, a year and half later, Makoto Yamaguchi asked if there would be any interest by the foreign participants of Tanteidan convention to participate in an Origami Caravan excursion to the Miyagi region. The response was unanimous and without hesitation: everybody thought it was a great idea! 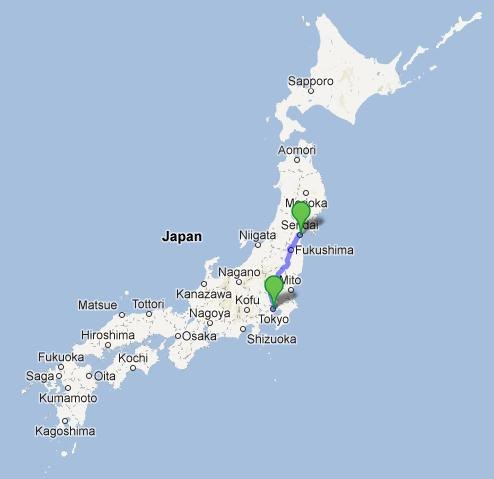 The Origami Caravan excursion took place on the 14th and 15th of August 2012 and involved 14 participants. We used two cars: Yamaguchi's car loaded with donated origami paper and books and a large rented passenger van. We drove 900km round-trip which required over 12 hours of travel time.

“We salute Makoto Yamaguchi's social conscience, which undoubtedly brings joy to those affected through his various Origami Caravan initiatives. Origami is clearly one small though significant way that the traumatized can at least temporarily forget their problems.” 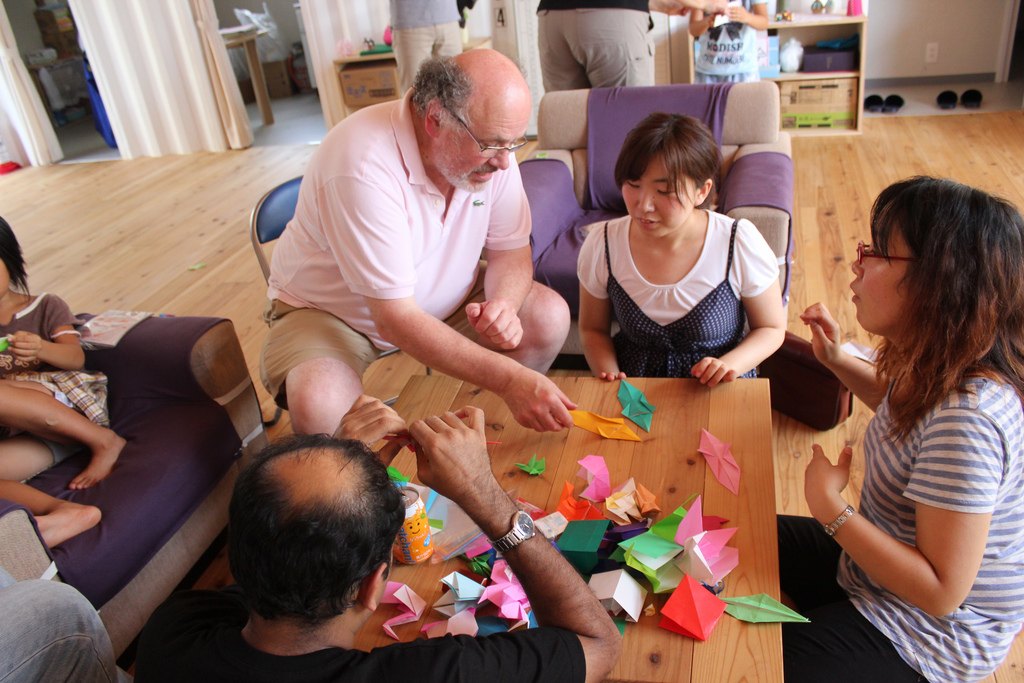 Dave Brill and Himanshu Agrawal teaching a model. All photos by David and Assia Brill, and Patty Grodner.


“And so for two days we taught origami at a temporary housing scheme on a baseball field and at a school. For the attendees, origami provided an outlet for unabashed fun or a moment of quiet, and distraction in the difficult process of rebuilding their lives. I hope it helped at least a little. And I hope it helped that we were foreigners and that we haven’t forgotten. It was an honor and a delight for me to have been there and to have met such wonderful and resilient people.” 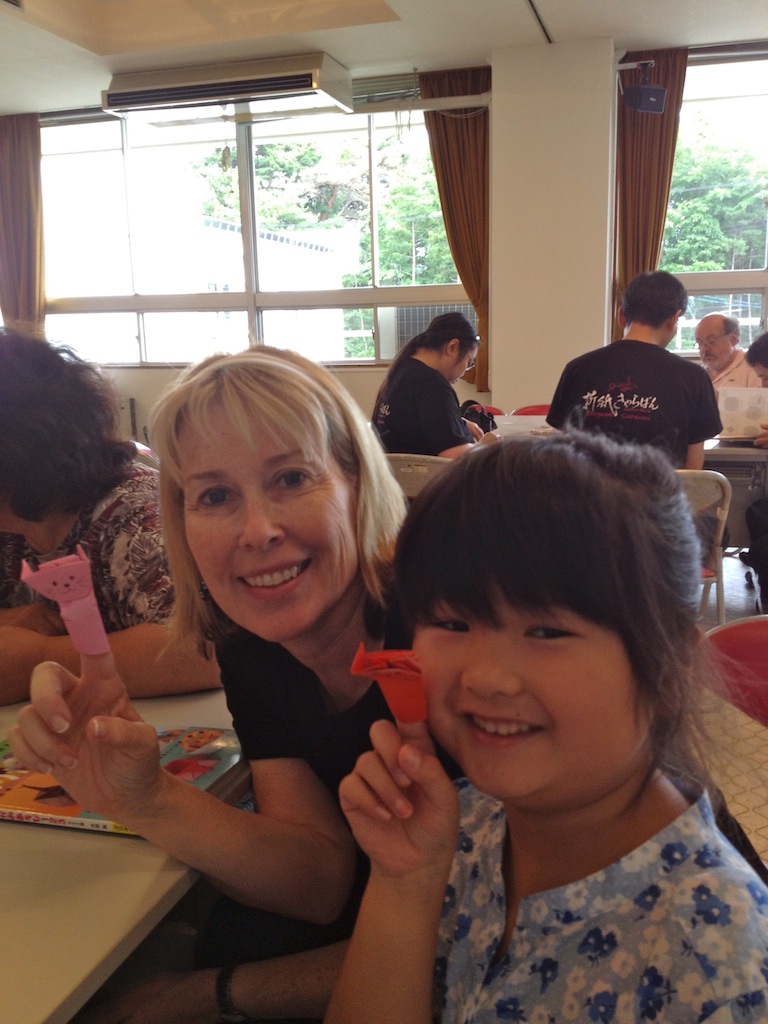 “I was also touched by the resiliency of the people we met. Instead of depression and anger, I saw people who had good attitudes and could smile and find enjoyment in the origami we were sharing. I think that the Origami Caravan established by Yamaguchi-san has made a difference with the residents of this area. Many people have donated money, clothing, and other material assistance, which is hugely important, but people also need fun and positive human interaction. The Origami Caravan provides all that and more. The people and children were smiling, learning and for a moment in time forgetting the situation they have found themselves in.”

“I could not help being impressed by the achievement of the people recreating order and, with hard work, how far they had come. That spirit was evident in all we met. Hopefully our short visit gave a few hours of enjoyment and a sense that the world has not forgotten their struggle, even if it is no longer in the headlines. The smiles from the children and the warm greetings we received reminded me of the power of the human spirit to fight on despite the knock backs. I wish them all best, and it will be a long time before I forget them.”

“Origami is evidently a source of pleasant distraction, focus, and often joy for those that discover it. In sharing this ancient and modern art, perhaps the Origami Caravan has at least given pleasure to some, introduced a tool for diversion, provided relaxation and focus to at least a few, and maybe even inspired a new artist or two.”

“I was honored to be given the opportunity to bring a little joy into that community through origami. I would encourage every folder to go out into the world and teach someone to fold, a gesture which I view as one of the central missions of Origami Caravan. Who knows? You may be able to pass on that curious condition that afflicts all origami enthusiasts or, at the very least, brighten someone's day and find a new friend.”

“As someone who rarely lacks something to say about just about anything, I find myself strangely at a loss for words to describe my experience. We'd bumped right into the Japanese trait of practicality and perseverance in adversity - you make do with what you have, and move on. To be so warmly welcomed into these communities in the midst of so much difficulty, even for a short visit, and to share our common interest in origami, was a very special opportunity.” 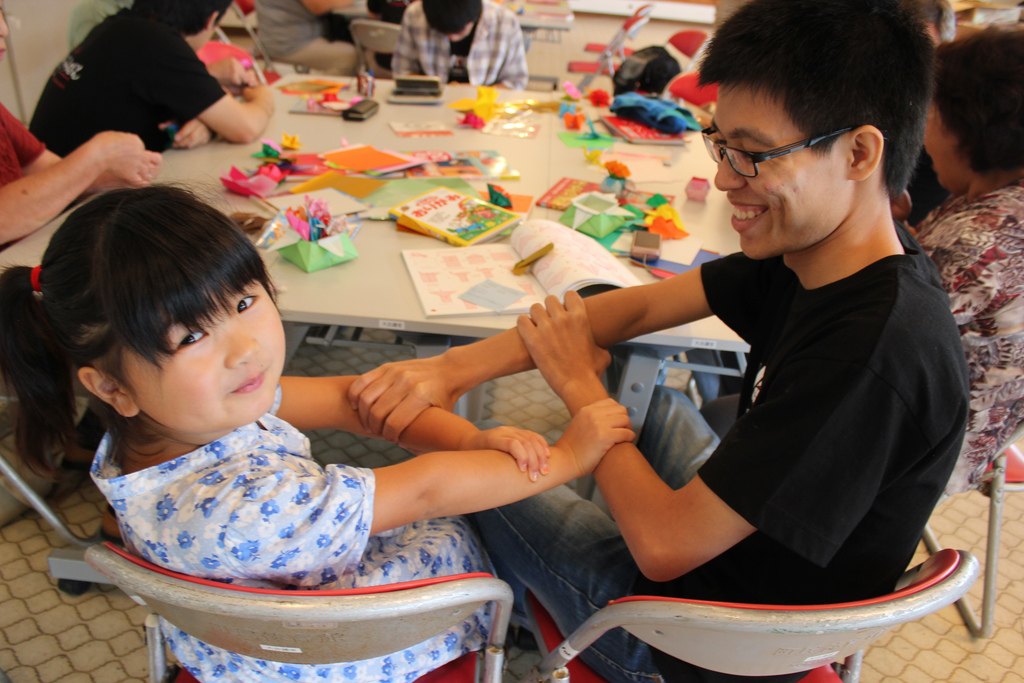 “As we shared our origami with children and adults alike, it was delightful to see the smiles on their faces. Through origami, we could connect on a level that transcends language, circumstance or location. I come back from that [Origami Caravan excursion] experience, loving and respecting origami even more than I did before.”

"Although most of us didn't know Japanese, origami brought us closer. Origami made a great difference; it was like a language connecting everybody, bringing smiles to every person young and old. It was just a great moment to make a difference for the people. I hope that the smiles will always be on their faces.”

“Truthfully, it was neither visiting my friends in Japan and Korea nor attending the Tanteidan and Seoul conventions that brought me on this trip with Yamaguchi. It was for those who have suffered from the tragic events and hardships. I hope origami can be used as a tool to forget the bad memories of the past and rest your mind. When I was teaching (I mostly taught to older adults), I smiled to myself that my grandparents would be proud, because it's as if I'm passing around the gift of origami, and repaying back my debt. ” 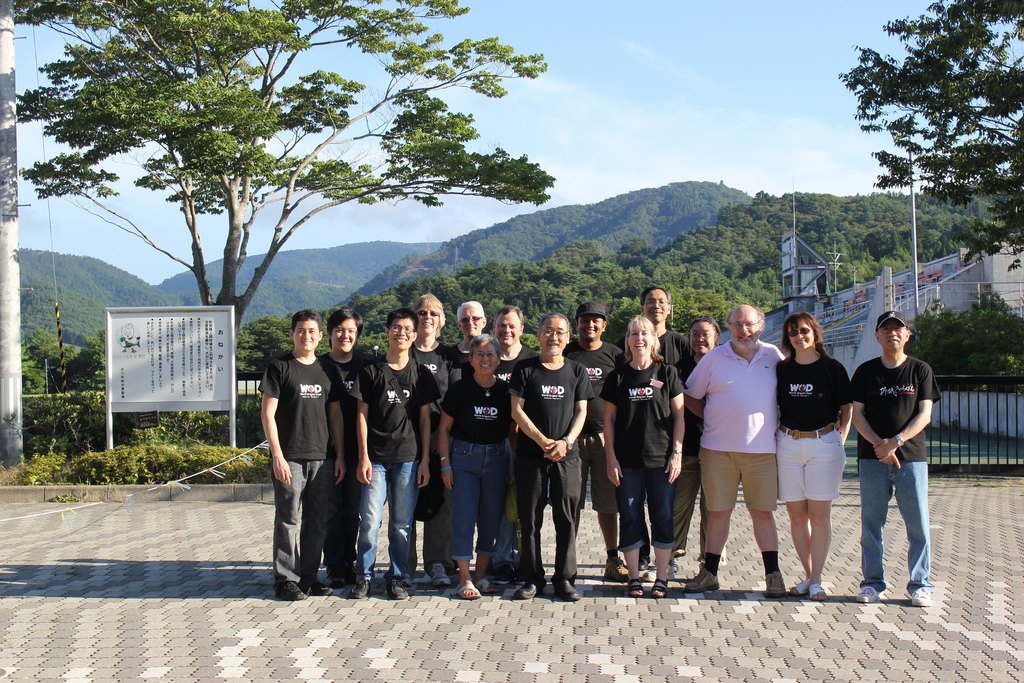 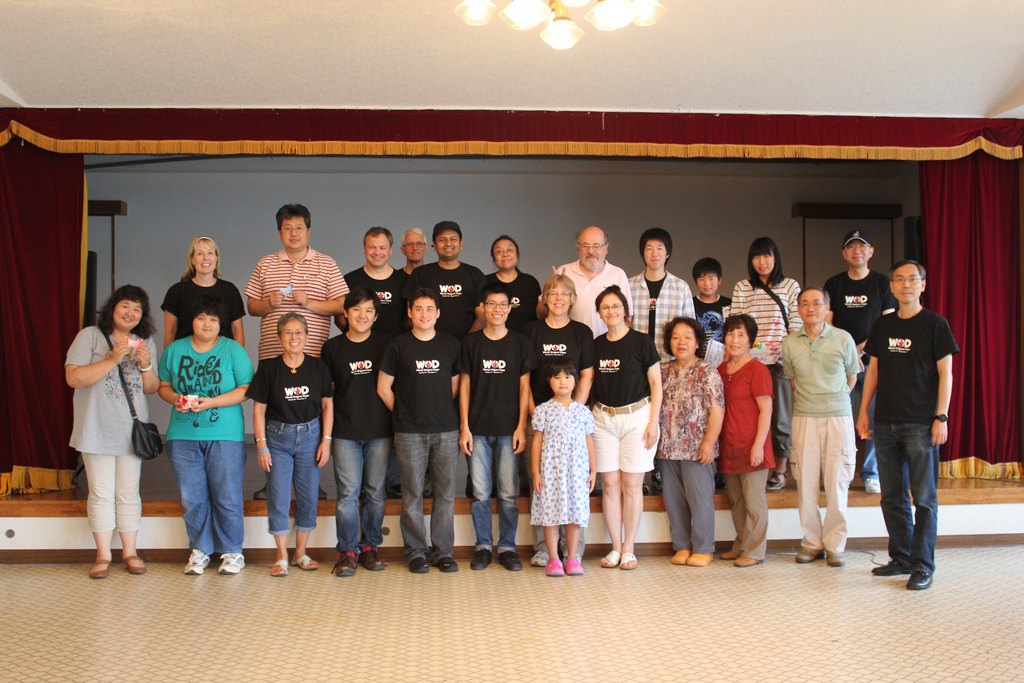 
“This was the 4th Origami Caravan. Origami Tanteidan convention participants and guests from outside of Japan visited people living in temporary houses in Onagawa and Sichigahama (Miyagi prefecture). Probably those that participated will now be in a better position to convey such activities to origami fans abroad. Good job to all who participated. In addition, the activities this time were made possible with the transportation costs generously contributed by “Tokai Tomo No Kai” Friends of Tokai (Fumiyaki Kawahata, representative), a donation from Midori Itou (Kanagawa), as well as collaboration from Japan Origami Academic Society (JOAS) and Origami House.” 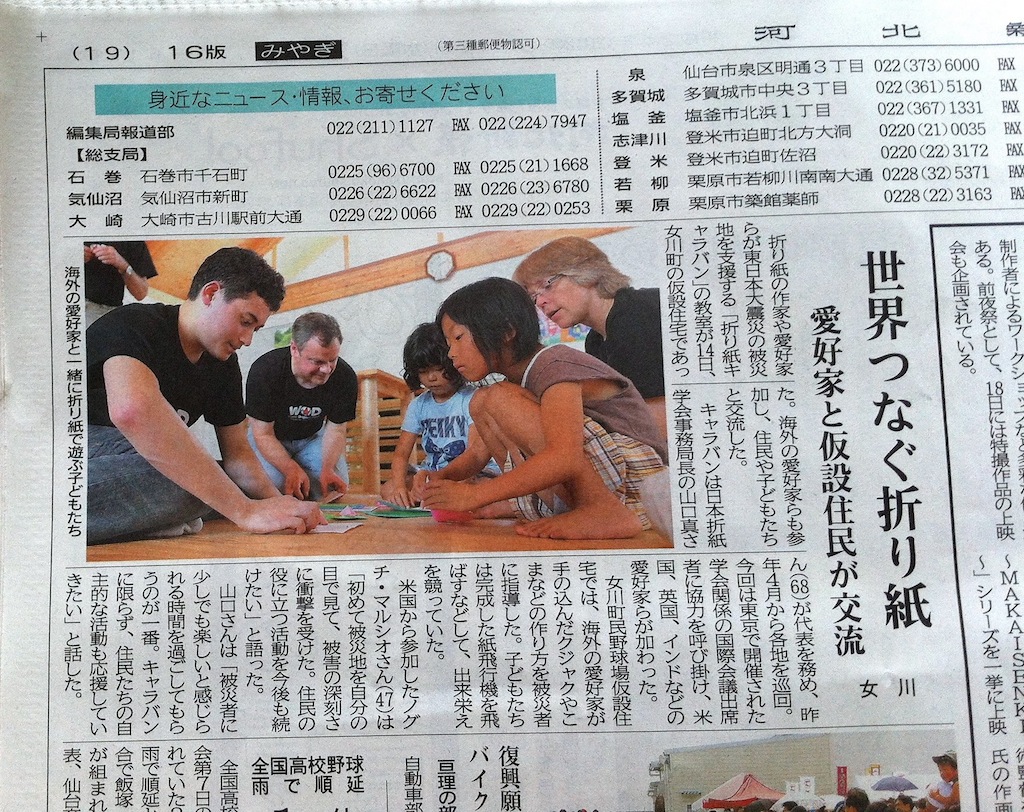 I could not agree with Patty Grodner more, when she said: “I feel that I received more positive from this [Origami Caravan excursion] experience than I gave.” Personally speaking, it was a humbling experience. Also, as far as the scope, Origami Caravan started initially as Japan↔USA. It is now Japan↔World considering that the program expanded to so many other countries. But, I see this program more like World↔World.

“Origami is for anyone, anywhere... anytime!” -- Michael Shall