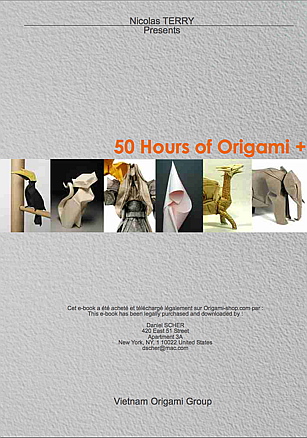 By now, everyone knows that the publication of a new book overseen by Nicolas Terry will be something special. Through Terry's efforts to supplement the world of large-scale, commercial origami books, he's published the works of some of today's most talented designers, including Roman Diaz and Quentin Trollip. Terry's latest project, 50 Hours of Origami +, is a compilation of amazing work by talented young origami artists from Vietnam who are members of the Vietnam Origami Group, or VOG.

Compiled and edited by Nicolas Terry, with help from Giang Dinh, it took them several years to coordinate efforts in collecting, editing, and assembling the diagrams. Along the way, they solicited advice from the origami community to determine which models should be included in the collection.

With 31 models and two crease patterns in all, the collection's models range from intermediate to super complex, with the crease pattern for Lich King (from World of Warcraft) taking a whopping 30 hours to fold by itself!

Folders should be experienced in navigating complicated sequences, shaping the models to get the desired effect, and should be accustomed to working with large paper sizes. Kami paper will be a poor choice for nearly all of the models; better is Tant, Canson, or other papers suitable for wet folding and thick layers.

Thus far, I have attempted folding Nguyen Hung Cuongʼs Chef Rat, inspired by the movie Ratatouille, and Hoang Tien Quyetʼs duck. The folding sequences are clear and the instructions precise. However, this book is not for beginners as even the simplest models require folders to have experience in wet folding, shaping, and performing multiple complex folds.

As with all of Nicolas Terryʼs books, each set of diagrams indicates the level of complexity, the optimal type and size of paper, and the expected folding time to complete each model. If you're clever enough, you can crack the book's secret code and obtain access to additional crease patterns!

For added interest, there are also short autobiographical sketches for each of the book’s contributors, giving more insight into each artistʼs life and folding techniques.