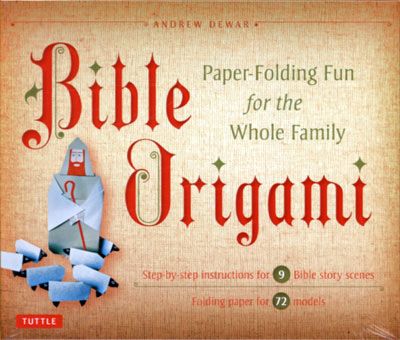 Those who know of my Humanist approach to life will find it slightly ironic that I've been sent a copy of a package called "Bible Origami". But rest assured, I'll approach it like any other origami book. The Bible Origami kit is a boxed set from the well-known Tuttle Publishing. It contains both paper and instructions - "everything you need to fold the figures from famous Biblical stories".

The full-color, 64-page booklet is very much on the slim side - personally, I'd class it more as a "booklet" than "book". Custom printed paper is provided for each design, although some models seem fairly anonymous without the patterned paper. Each project begins with the basic draft of the story that inspired it, followed by an explanation of the significance of each accompanying origami figure.

It is suggested the finished pieces can be used to "re-enact these timeless stories, or to create inspiring dioramas". These include Adam and Eve, Noah's Ark, the Tower of Babel, Jonah and the Whale, Christmas, and Easter. Extra projects are also suggested such as the Annunciation and Jacobs Ladder. 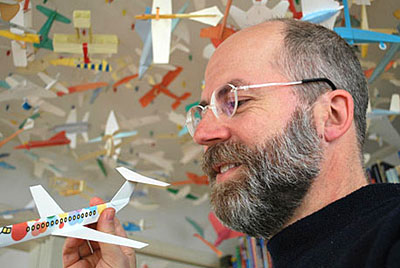 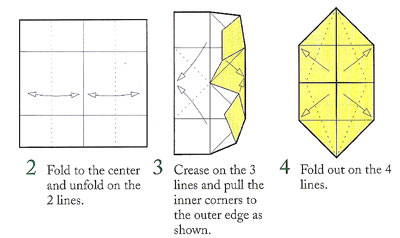 Author Andrew Dewar has a passion for paper airplanes and has written several paper craft books on the subject. In an interview, he explains his approach to creating; "The big challenge in coming up with new designs is being sure I haven't accidentally copied someone else.

There are only so many ways to fold paper into birds, stars, boxes, or whatever, and it's easy to duplicate without knowing. So I try to look at every book that comes out. Talk about a challenge! Then, my pieces have to be simple and reproduceable, so they can be folded by anyone, and as you know, there's nothing harder than simple." (Amen to that!).

A brief introduction is followed by a "how to fold" page, which rather curiously uses a penguin model (not in the book) to illustrate reverse folds. No attempt has been made to show overlapping layers. Whilst showing additional layers does put a small extra burden on the illustrator, it makes the diagrams much more "alive".

For a self-confessed origami enthusiast, it’s both curious and frustrating that the author has eschewed the traditional symbol set, using hollow arrows throughout and dotted lines for both valleys and mountains. Combined with very thin arrow lines, the end result is far from clear, although people will probably muddle through most designs.

Another oddity is in the text - for example, on the “Ship”, step 7 says “fold up on line 5”, although the lines have no numbers. A step on the “Whale” simply says “Reverse the last three folds” with no visual guidance at all. Other steps are wildly optimistic – you go from a square creased in quarters to a blintz base with two sunken corners in a single step, with no pre-creasing! This will undoubtedly stymie many beginners. 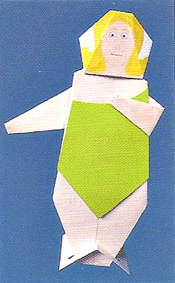 Purists may baulk at the “making a tableau” page, where it suggests “the first thing you might want to do is glue loose flaps and edges down”. You’re then recommended to use a ruler to create both valley and mountain folds. To be fair, these are perforated cut-out shapes to help display your models. Adam and Eve are both depicted as blondes with long hair and Eve appears to be doing some kind of funky dance, possibly explained by the text, “Eve was created from Adam’s rib”.

The designs throughout are simple and whilst not unfamiliar, do seem to be original creations. So, to buy or not to buy? If you’re an old-school Christian with children who might enjoy a folding challenge, you’ll get a lot of fun from this book and to be fair, this is clearly who it’s aimed at. It also reinforces classic Bible tales, if that’s your bag. There’s undoubtedly a good market for this in the States, possibly less so elsewhere. As a source of new models for an origamist to learn, there’s not a lot of quality to be had, I’m afraid to say.

The supplied paper is shiny and not particularly good for folding, but the templates do add a lot of much-needed detail to the designs. All in all, it’s a shame they didn’t use an experienced diagrammer to make the instructions as clear as possible, although there are color photos used liberally throughout. 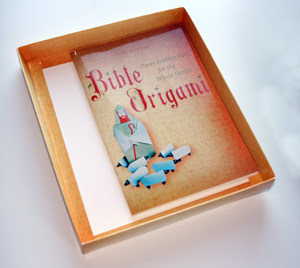 The actual contents, aside from the paper

The layout is ever so slightly amateurish, it’s more like the kind of thing you’d create using MS Word than a proper page layout program. The packaging (once again) makes me rather cross – the box appears quite substantial until you realise 3/4 of the height is empty and the booklet itself is around 1/8” thick (or perhaps “thin”). Amazon offers it in the States at $14.53 or £15.76 to us Brits, who get royally ripped-off yet again with the exchange calculation. I really can’t see many from the UK paying this price unless they are very keen, but I’m perhaps not the best person to judge!

Many thanks to Rowan Muelling-Auer at Tuttle for the complimentary copy.