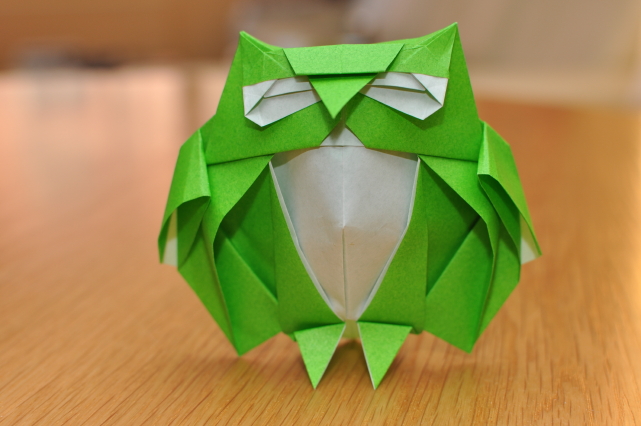 My origami and cookbook purchases follow the "one is enough" principle. If there is one outstanding origami model or a single tasty recipe in the book, then I consider my acquisition a success. But, oh, Roman Diaz, you have shattered my rule! What am I to make of Origami Essence, a book with over 30 superb models?

It starts with the cover—a delightful caricature of a fox that I'd rate among the best foxes in the origami literature. As with all of the models in Origami Essence, the folding sequence for the fox is clean, highly original, and doesn't put undue stress on the paper.

Unlike today's trend for hyper-realistic models that require 150-plus steps and yield so-so results for your average folder, Roman Diaz knows how to add just the right touch of detail to a model without rendering it lifeless. Origami Essence contains no less than three different owls and four frogs. The models range in complexity, and each is cute and perfect in its own right. The 66-step bullfrog is notable for its realistic feet and belly, but the 27-step little frog is no less impressive. My favorite is the complex owl, which, to use Roman's term, displays the very "essence" of an owl (be careful with step 37 however; the crease doesn't lie precisely along the fold from step 30).

In addition to the folding diagrams, Roman also includes a variety of design discussions. He explains how the geometry of polyhedra can be incorporated into animals to create a three-dimensional look, and he walks the reader through the evolution of his frog designs.

Anyone who folds at an intermediate level or higher should own this book. It really is that good.