"THE ORIGAMI GARDEN: Amazing Flowers, Leaves, Bugs and Other Critters" by Ioana Stoian 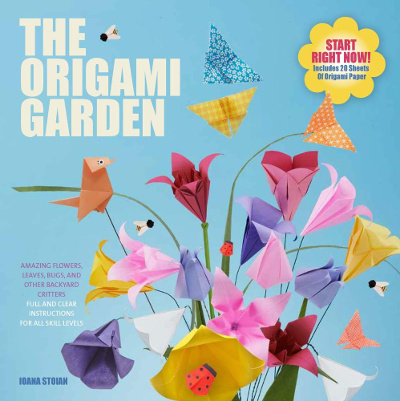 Cover of "The Origami Garden" by Ioana Stoian 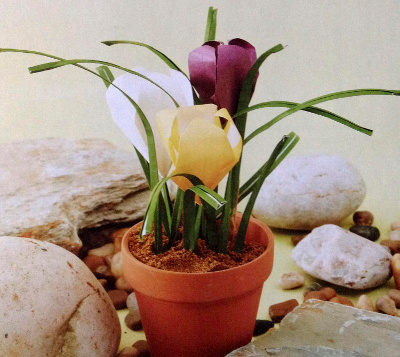 Crocus designed by Ioana Stoian as presented in the book 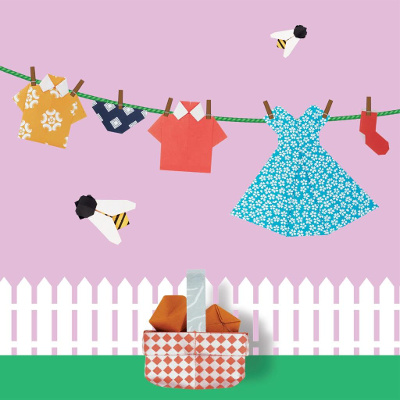 Photo in the book of a clothesline of models

At first I didn't understand Ioana Stoian's origami. It was too simple. The finished model didn't stray far from its origami base. But as I paged through her first book, "Origami for All," I eventually began to understand that Stoian is an artist who has chosen origami as her medium. Her work is not hard to fold, but it has a consistency of style and a real beauty. Last year, Stoian produced an origami-inspired handmade artist's book, and the online video showing it in action demonstrates her ability to incorporate origami into artwork.

Stoian's second published book, "The Origami Garden," presents works that fit her aesthetic profile and could conceivably be found in a garden (even if – like a dress – on a laundry line). The models were created by Stoian and a handful of others, or are traditional.

The crocus, one of Stoian's designs, is a good exemplar of her style. The flower is made from a preliminary base with narrowed sides — "I could have designed that," you might say. The leaves show a thin sliver of the reverse color running up the center, and when the flower, stem and leaves are set in a tiny flower pot, the result is stunning.

Other flowers found in the book are a two-dimensional carnation, suitable for a greeting card; the traditional peel-down tulip; the traditional lily and several variations; and Stoian's "Flower in Full Bloom." There are a few containers for flowers, or anything else. A box by Leyla Torres makes a good flower pot. James Sakoda's basket is diagrammed, although it is not credited to him.

And as mentioned above, there is lots of clothing: pants, shorts, Alison Riesel's dress, the traditional shirt, a cute pair of socks with contrasting heel and toe (although the reverse of the model is mostly white).

The animal kingdom is represented by a dog, a cat, a bunny basket, a bee and a butterfly, among others. There are a few traditional birds as well as the Jenny Wren by Viviane Berty and an owl by Wayne Brown. Two notable designs are a rather modernist squirrel by Stoian and a minimalist snail by Eric Gjerde — just a spiral fold for the shell, plus a body and a head with those strange eye tentacles snails have.

A number of the models have been published before, and some are available through online instructional videos by Leyla Torres, but there is enough new material to make the book worthwhile. The models are simple to low intermediate in difficulty, and a packet of patterned and solid paper is included so you can, as the cover says, "start right now!"

And indeed, if you want to start even before buying the book, here are some online resources of models presented in the book:

I'm sure it will whet your appetite!