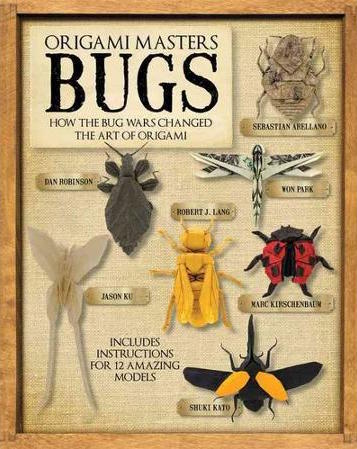 Origami Masters: Bugs is an ambitious book on multiple levels. Firstly, it is full of diagrams that are sure to push even veteran folders. Whether it is the signature technical complexity of Robert J. Lang and Shuki Kato, or the more subtle shaping challenges of Sebastian Arellano and Dan Robinson, each piece has earned its place in a book of folding masters.

What really makes Origami Masters stand out, though, is the way it uses its collection of diagrams to highlight an important era of origami history. Many books will be centered around a certain theme - Play Madlibs with "John Montroll's Origami _______" and there's about a one in three chance it'll be a real book. But Masters's theme of Bugs is of particular significance due to the infamous Bug Wars of the 90's.

In case you don't know The Bug Wars were an era of unprecedented advancements in the field of origami design. Isolating points from a square is the fundamental challenge of origami design, so when people would show up at early conventions with a beetle, which had six legs, it was a significant accomplishment over traditional models which usually had four (like a bird base) or five (like a frog base). Then people figured out spiders, with eight legs. Then scorpions, which had eight legs and a tail. People were adding horns, antennae, wings - constant new advances were being made as the underlying rules of origami design were being discovered for the first time.

That's the abridged version, but if you're interested in learning more, this book has some great short essays on the subject, printed right before the diagrams. And the pieces selected do a wonderful job of providing a similarly abridged demonstration of those developments first hand. Like many books of diagrams the models scale up in difficulty over the course of the book. And as the models get more complex, they utilize more of the advancements made over the course of The Bug Wars.

The back of the book also contains crease patterns for some of the more complex pieces. This has been a growing trend in complex-level origami books, and a book with subtext on the evolution of design complexity would have felt incomplete without them. In short, Origami Masters: Bugs is a rare but beautiful find in the world of origami publications. Like origami itself, the book manages to espouse multiple facets of depth all in a single straightforward entity. Highly recommended.