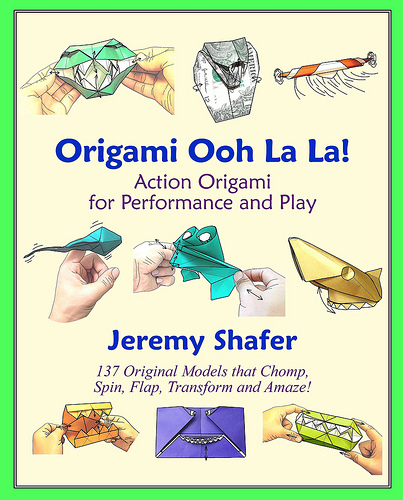 For some folders, a finished origami model is a museum-worthy piece of art. Gaze at it, admire it, and photograph it, but touch it? Oh no—hands off, please.

By contrast, Jeremy Shafer doesn’t just touch his completed models; he uses them as performance pieces. He’s even been known to set them on fire. In Shafer’s newest book, Origami Ooh La La!, he cleverly exploits the possibilities for transforming origami into an action-oriented art form, but be assured, you won’t need matches or a fire extinguisher.

It has been ten years since Shafer released his first book, Origami to Astonish and Amuse. That book established Shafer as a master of the unexplored, slightly far-out possibilities inherent in a piece of paper. His surfer on a wave (complete with an ominous shark fin) and his “man swatter” (a fly swatter but with an outline of a squished man) revealed a sense of humor matched by a talent for innovative design.

Origami Ooh La La! is a tad less wacky, but no less creative than Shafer’s first effort. A fitting place to begin with performance origami is the flapping bird. Shafer reimagines the flapping bird with six variations, including a warrior crane with a sword attached to a wing.

From there, Shafer moves on to a chomper and a food grinder with pointy teeth, a collection of spinners, a running nose (an athletic nose with feet, not mucus), and a “Familiar Liar” (Pinocchio with a nose that grows and shrinks).

One favorite of mine is Shafer’s Man in the Moon Watching a Shooting Star. In his notes to the model, Shafer reports that it took him more than 10 years to diagram it because he kept searching for a way to fold a mathematically perfect 8-pointed star. Luckily for us, even though Shafer did not succeed, he settled for a 5-pointed star instead.

The majority of the models in Origami Ooh La La! are entirely suitable for beginner and intermediate-level folders, and Shafer’s diagramming throughout the book is superb. Folders who enjoy complex challenges should turn to the final two chapters where they will find an assortment of “flashers” (pleated origami patterns in which the paper winds around the center like a vortex) and other tantalizing projects like a Koch snowflake fractal.

Shafer’s detailed notes throughout Origami Ooh La La! leave you with the sense that there is more origami on Shafer’s mind than can reasonably fit into two books. Indeed, judging from his quarterly origami newsletter, BARF (Bay Area Rapid Folders), there is easily another book devoted to pop-up cards just waiting to be published. In the meantime, Origami Ooh La La! will keep you plenty occupied.