Review: "Outside The Box Origami" By Scott Wasserman Stern 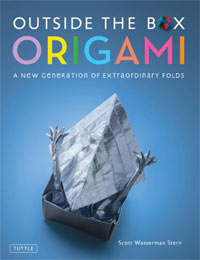 I was sent this book for review by the publishers, Tuttle. I knew nothing about the author, so did some quick googling. Apparently, Stern has been folding origami since he was three years old. And has been an active member of the Origami Club of Pittsburgh and a regular attendee of OUSA's national convention in New York. He has now reached the grand old age of seventeen, so is still very young for an origami author.

If I had seen the images of models on the back cover first, I would have guessed the book was by Jeremy Schafer. Indeed, Schafer gives a complimentary quote on the back cover, alongside Montroll, LaFosse and Engel – handy people to have on your side!

The book begins with a two page introduction where we learn about the author and what motivates him. Three pages of symbols follow, then we’re into the folding. Part 1 is “simple folds” and immediately, you have to take issue with the level. By the third model (a skull), we’re asked to perform a “partial closed sink”! Several of the models are geometric; rings and wreaths etc. The “Starburst” modular is an elegant adaptation of a bird base and most impressive. The “elephant” by comparison, doesn’t do it for me and misses the essence of the subject somewhat.

Intermediate is next, a 59 step dog that also seems to lack the proper proportions. The “checkerboard prism” interestingly produces an unlikely modular from a fish base. The “flapping bird” is going to challenge many folders. I always feel you’re asking for trouble creating flapping birds, unless they get anywhere near the beauty of the original. This one, to my eyes is rather over-folded.

The advanced section comes just over a third of the way into the book, which probably tells us where the author’s heart lies. The “floral design” made from a blintzed fish base (why is this such an uncommon base?) is elegant and Shen-like. The “crane with a crane as a head” will tax the accuracy of many folders and 74 steps produce quite a simple looking ghost, but with five (tiny) fingers per hand.

After advanced, comes “expert”, including a “pig with wings” (of course!), a Fujimoto style “snowflake”, a 58 step “weave design” that surely must have a simpler folding solution and finally, 100 steps of “folding outside the box”, literally a pair of hands, folding a square, coming from a box, of course, from a single square of foil.

The diagrams (by the author) are drawn to a very high standard and in general, the hardback book is attractive and eye-catching – let’s hope Tuttle have finally lost their previously somewhat dated approach to design. It’s a shame there is no reference to or thanks given to any origami societies at the end of the book.

So, who will get (or “get”) this book? Fans of Schafer’s weird and wonderful origami world will undoubtedly enjoy it. Beginners will struggle from the very first model, despite the byline (undoubtedly not from the author) on the back cover which says "paperfolding art for every skill level". However, those who value a challenge will find plenty to amuse them. The one Amazon review says “This is the best origami book I have seen. I am definitely giving it to a friend who has been sitting around with a broken leg.” For me, many of the designs, whilst clever, lack that indefineable quality of class. It’s almost as if the concept of the model redeems the amount of work and technique required to produce it.

To be frank, I found only a few models inside that inspired me to fold them and it isn’t a book I will be coming back to very often. Then again, I am a jaded old hack, maybe you need to be young to get the most from it. I can't imagine anyone who wouldn't find something to enjoy in the book. I get the sense that Stern, if he continues, will become a gifted folder and creator, but that we’ve seen him slightly early in his “career”, before any recognisable personal style has emerged. All that said, it's a book he should be proud of and persuading a publisher to release a collection of original designs (what, no masu box?) is no mean feat, believe me!

This book can be purchased directly from Tuttle, the publisher.