Six Intersecting Pentagrams: Diagrams and the Puzzle of Its Genealogy 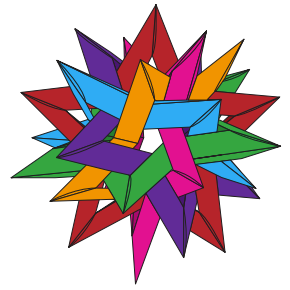 One of the challenges that I ran into while documenting this model was getting clear on its attribution. I'd assumed it was Meenakshi Mukerji, but upon further investigation I found that the attribution was not only not straight-forward, it was downright fuzzy.

Mukerji had introduced me to the model initially, when she challenged me to come up with a simple, easily repeatable algorithm for assembly. But she'd sent me links to images of the model on flickr that had been folded 4 years prior, as well as a link to a computer generated image depicting it on Robert Lang's website, which he had posted almost a decade earlier. On the other hand, Francesco Mancini (the owner of the flickr images) had credited Leong Cheng Chit and Jared Needle as having independently discovered it, as well as Tom Hull and Francis Ow as being the co-designers of the unit and its use. So confusing…

I checked in with everyone mentioned and found that this model has a long history and has had many creators/collaborators and emissaries over the years. It's fascinating how there are so many examples and occurrences of models being designed simultaneously by different people who were neither working together nor even aware of each other.

In this case, it appears that while the original "sketch" of the model was posted several years prior, four different creators had each completed their own, unique versions of the work – all inspired by Robert Lang's original illustration.

Rather than try to convey the exact history of each creator as they designed their own version, I think presenting each person's account from their own point of view makes for an intriguing juxtaposition.

Back in 2003 I was checking out Robert Lang's website and saw the section on Polypolyhedra. I decided to attempt to design a few of them. After first completing the assembly of the four triangles, I turned to the #7, six 5-pointed stars. By putting in a joint in the middle of the units I found I could make a 5-pointed star (that was actually 3D) just like those in the virtual model.

Right around the time I finished folding mine I saw that Leong Cheng Chit had posted up his version in the same week! I emailed him and exchanged my super rough module diagram (Attached. I was 16) with his full diagrams of the entire process, and saw that they were basically the same. I used 1x2 rectangles, and he used A4 sheets cut into 6ths.

I submitted mine to the 2004 OUSA Origami by Children exhibit.

The source of the interest in polypolyhedra was the paper, “Polypolyhedra in Origami”, presented by Dr. Robert J. Lang at the 3rd Conference of Origami Science, Mathematics and Education in 2001. The paper is published in Origami^3 the following year. I did my origami design of the Six intersecting Stars in 2003. I also have the designs of other polypolyhedra.

What caught my interest was that many of the polypolyhedra have enantiomorphic symmetry, like that of Hull's FIT. For such modular, folding the units is relatively easy but assembling them into the complete model is difficult, because you have the right hand and the left hand versions. The polyhedra of the polypolyhedra are stars as you can see in the diagrams of my SIS. In origami, of course, you do not fold the complete stars but only the edge models of the stars. In designing the edge models, we need consider 1) the true shape of the star and 2) breadth of the edge units (so that the stars tuck together nicely).

Why do I select 135 degrees between the corners of the star, and 60 (2x30) degrees for the corners? These are the angles for the star when it is flat. For a 5-point star the angle between two corners should be 104 degrees and the angle of the corner is 36 degrees. I have not calculated the angles when each of the origami star takes a 3D form when assembled, but we can assume that 60 degrees will approach 36 degrees and 135 degrees will approach 104 degrees and the stars will fit nicely together. I think my SIS looks more “solid” and Francisco's looks slim. It is a question of aesthetics.

Regarding your question, I was inspired by Robert Lang's work on polypolyhedra and by Ow-Hull 60° units. After I published the first pictures I discovered that Jared Needle and Leong Cheng Chit designed something similar before me. I didn't know their model and the folding sequences but the results look very similar. That's why I called it "my" SIP. I developed the unit independently and found different assemblies and new models using the unit as you can see in my flickr photostream. The Groviglio di Stelle (Tangled Stars) was inspired by Daniel Kwan's Six Intersecting Pentagonal Prisms and the Borromean Stars by a dialogue with David Brill in Tuscany.

(and in a later correspondence)

Maybe I can add something to the history: after I folded the SIP I thought that, because the locking mechanism is the same of Hull's FIT, maybe I could link the units in a different fashion, i.e. three units instead of two. It worked! And the Star dodecahedron was born. After that I tried with other assemblies (Star Icosidodecahedron, Star Prism) and I experimented with different proportions (Star Holes) and angles (Borromean Stars). Then, it occurred to me that I could make a five point star instead of a pentagon and I designed the Tangled Stars and the latest models (12 interlocking stars #30 and #31).

Another thing that I found intriguing is the fact that each creator put their own, personal signature on the model. Each one implemented the internal module with a slightly different angle, bringing a different esthetic to their work. The model, as it was presented by Leong Cheng Chit, bends the Ow unit at an angle of 30°, while Mancini utilized an angle of 22.5° (one half of 45°). While working with the model myself, I used the CrOw 30 unit as taught to me by Mukerji (I've nicknamed the bent units CrOw 30, 27 and 22.5 respectively for “Crimped-Ow 30” etc.).

I found the fact that the same design worked with two different angle fascinating and in correspondence with Mancini he reiterated that he felt that the “proper” angle was probably 27° and that he wanted to work on figuring that out at some point in the future. Coincidentally, I soon heard back from Needle who informed me that he had used the 27° in his original design.

I was suspicious that this was no coincidence at all and that it was probably possible to create the model with any angle all the way to 0° and checked with Lang around that prediction. He congratulated me on my intuition and sent me a link to his implementation of that exact configuration from all the way back in 2002, which he'd published in the OUSA Annual Collection that year.

It turns out that the SIP is one of 54 forms discovered by Robert Lang during a series of investigations he made in the late 90s. Lang was originally inspired by the idea of creating geometric puzzles in origami similar to "wooden burr puzzles" and fell upon this specific subset of geometric constructs, which he dubbed polypolyhedra. He first started writing on them in 1999 and after exhaustively identifying the set of possible models (and implementing and diagramming several in the process) documented the full set on his website in 2004. He also discovered that the general concept of entangled polyhedra had been extensively explored by Alan Holden, who described and showed wooden dowel models of many of them in his book, Orderly Tangles (Columbia University Press, 1983), and a notable origami example of the concept already existed in Tom Hull's 1995 creation, Five Intersecting Tetrahedra. Holden, in fact, presented a wooden dowel model of six entangled pentagrams (figure 7.10 in his book), as well as many similar structures, both polypolyhedra and others.

I came to learn that SIP is #7 of these 54 forms and that it, and several others, have been implemented and documented over the years by various people, often simultaneously and without knowledge of the others' efforts. In his own implementations, Lang gave names to several of them (after mountain peaks in the Himalayas). SIP was one of them, which he called “Shishapangma.”

Here is a listing of the current list of which of the polypolyhedra have been executed by whom and when:

And which have been diagrammed and the place of their original publication:

In addition to that, there are several other polypolyhedra which are close cousins to the 54 polypolyhedra Robert Lang found*, including Daniel Kwan's Six Intersecting Pentagonal Prisms and Kawashima Hideaki's Crystal Star (Origami Tanteidan #106, 11/2007) as well as a full set of explorations of the utility of the CrOw 22.5 unit by Mancini including Star Icosidodecahedron, Star Prism, Star Holes and Borromean Stars.

With various aspects of it being created by various individuals independently, as well as using each other for jumping off points it's difficult to create a simple, straight forward timeline. But since there has been SO much fascinating material produced around this model and various aspects of its and its cousins' development, I'll attempt one – just for this particular model.

So at this point, having spent DOZENS of hours researching the proper attribution of the piece, I can say with some certainty that I am still completely uncertain as to who might "get credit" for the model I diagrammed. Lang clearly was the mathematical "archeologist", who unearthed the model and presented it to the origami masses, though it had been discovered previously in different contexts and forms at an earlier time by several people. Four different folders have all implemented the model in 3 different CrOw angles, two different unit lengths and 3 different rectangle sizes. Evan Zodl had videotaped one version of the Mancini CrOw unit on YouTube while I created a completely different method of folding the unit Mukerji taught me and created the assembly algorithm.

I recall waaaay back in the day when I was writing video games that a given game was written by ONE person and one could make statements such as "I LOVE the work of Silas Warner." But as games (and budgets) expanded in scope this shifted and it became teams of people rather who created the work: artists, programmers, writers, producers, etc. And, perhaps, as things evolve in origami this will become the case as well and models will require credits rather than a simple attribution.

So in that spirit we roll credits:

*Lang found the 54 uniform-edge polypolyhedra, which are those in which each edge and its immediate neighborhood is the same as every other. There are many other polypolyhedra with more than one type of edge, such as Kwan's SIPP.

When I tried to fold, the Pentagrams are 3 dimensional (twisted). Is it supposed to be that way? Or was the paper to be folded from ratio of 1 x sqrt(2) ?