Skip to main content
The website will undergo some maintenance on Monday, January 30 around 10:22 pm EST. It should be back shortly thereafter.

Story of a Foxhound 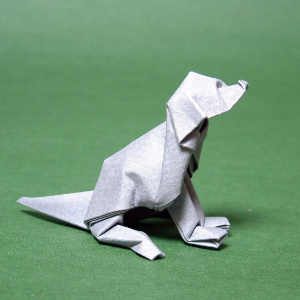 Dating from 1975, the foxhound is a very early design of mine, but it remains one of my favorites. It’s not too difficult, and you can soon knock off quite a pack of baying hounds from a few 2x1 rectangles obtained by cutting standard origami squares in half. The traditional 22.5° geometry easily lends itself to changes in pose to enliven the scene.

The seated dog is essentially the same thing: here are the diagrams for that.

It began with my studies of the blintz bird base, even before I joined the BOS in the early ‘70s. I’d collected a small library of origami books, one of which is a still-treasured copy of Randlett’s Best of Origami. It contains the marvellous Elephant by George Rhoads, an original of which has recently come to light in a box of models from the late Gershon Legman’s collection (see photo below). This example is signed GR Feb 1955. This classic elephant uses a blintz bird base, which is apparently his invention, according to Legman. 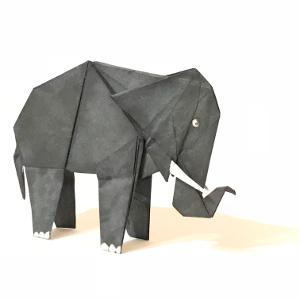 In the mid 70’s, Rhoads’ Elephant was a complete eye-opener for an impressionable 24-year-old like me. “How is it possible to obtain all those details from a single square?” I wondered. I’d read Secrets of the Blintz, an article by Gershon Legman, who was Rhoads’ friend and correspondent. It appeared in a fascinating periodical by Dokuohtei Nakano called The Origami Companion in 1973. Legman describes the development of the blintz technique, which doubles the possibilities of the 4 corner square by providing a total of 8 corners. My question was answered!

From this point, the blintz bird base seemed to me to be the only way to overcome many of the problems of the creative animal folder, who wishes to portray the animal’s four legs, head, two ears and tail. The blintz bird base gives the right number of flaps for everything. I was so excited that I overlooked the disadvantages of the approach, such as bulk and wasted paper, which many animal designs have circumvented. I attended my first BOS convention in April 1975 in London, meeting active creators such as Max Hulme and Martin Wall, at the Russell Hotel. It then became obvious to me that the best solutions for origami designs involved planning and analysis before even starting. The doodling method which I had previously used suddenly seemed inferior, and I realized the blintz bird base was not after all the only way to go.

My subsequent experiments produced a number of animals: a fox looking over his shoulder, then a horse and rider from a 2x1 double blintz bird base (which has all the points, but is very thick), and then the fox hound, this time from a 2x1 half blintz bird base. So the Fox Hunt scene was born. All are described in Brilliant Origami.

After all this time, I’m happy that Sara Adams has chosen to feature the hound in her latest video. Thanks to her, you won’t be out-foxed in folding it. Happy Year of the Dog!