“Origami Moments” by Meng Weining is the second book by a Chinese artist to be published recently by Nicolas Terry, who always seeks innovative new faces in the field of figurative origami. (See the review of “Duo-Color Origami” in issue 62 of The Fold.) Meng is Terry’s latest discovery, and he is indeed a fresh and interesting one!

The book features all animal models, except for one (a witch), and it emphasizes details with color changes. This may sound normal, but the way Meng manages to incorporate color changes into his models is magical.

We tested nine models, and this is what we found:

The models are presented in order of difficulty and are not divided into chapters.

The average number of steps is 100. The shortest model, the Snail, has 33 steps. The longest, the Rooster (180 steps), is the second to last in the book.

The table of contents, spread over eight pages, shows images and page numbers.

There is an eight-page section that presents the design process of each model and some insights from the creator. Lastly, there is a single page for symbols.

As is the case with “Duo-Color Origami,” the author is the diagrammer. Meng also prefers to use very little text, stating only the name of the action. The symbols are conventional, and we had no problem understanding everything. The arrows are clear and go from point to point. we couldn’t find a single mistake, but I did find some missing creases.

We did have a problem with the way the author illustrates layers. In short, he does not. The diagrams in the book can look a bit flat. In some cases, it’s hard to differentiate between a crease and a flap’s edge. Also, there are a few steps throughout the book in which you have to fold several layers, but the text doesn’t state how many, and you have to check the next step to be sure. This does slow you down, and we wish there had been some text to clarify.

Furthermore, the author does not use shadow, and sometimes it’s hard to differentiate a crease line from an edge of a layer. (See an example in the Frog section below.)

Most of the models start with precreases. Around the first 10 steps instruct the reader to “fold and unfold.” Only then does the real folding process start. Once you decipher the diagrams, the steps are not too difficult to fold. The challenges are mostly cases where the diagrams are too minimalistic. As most of the models we tested are based on box pleating, the accumulation of layers can be an issue, and some features are hard to fold if your paper is not thin enough. Luckily, the author does provide paper recommendations. 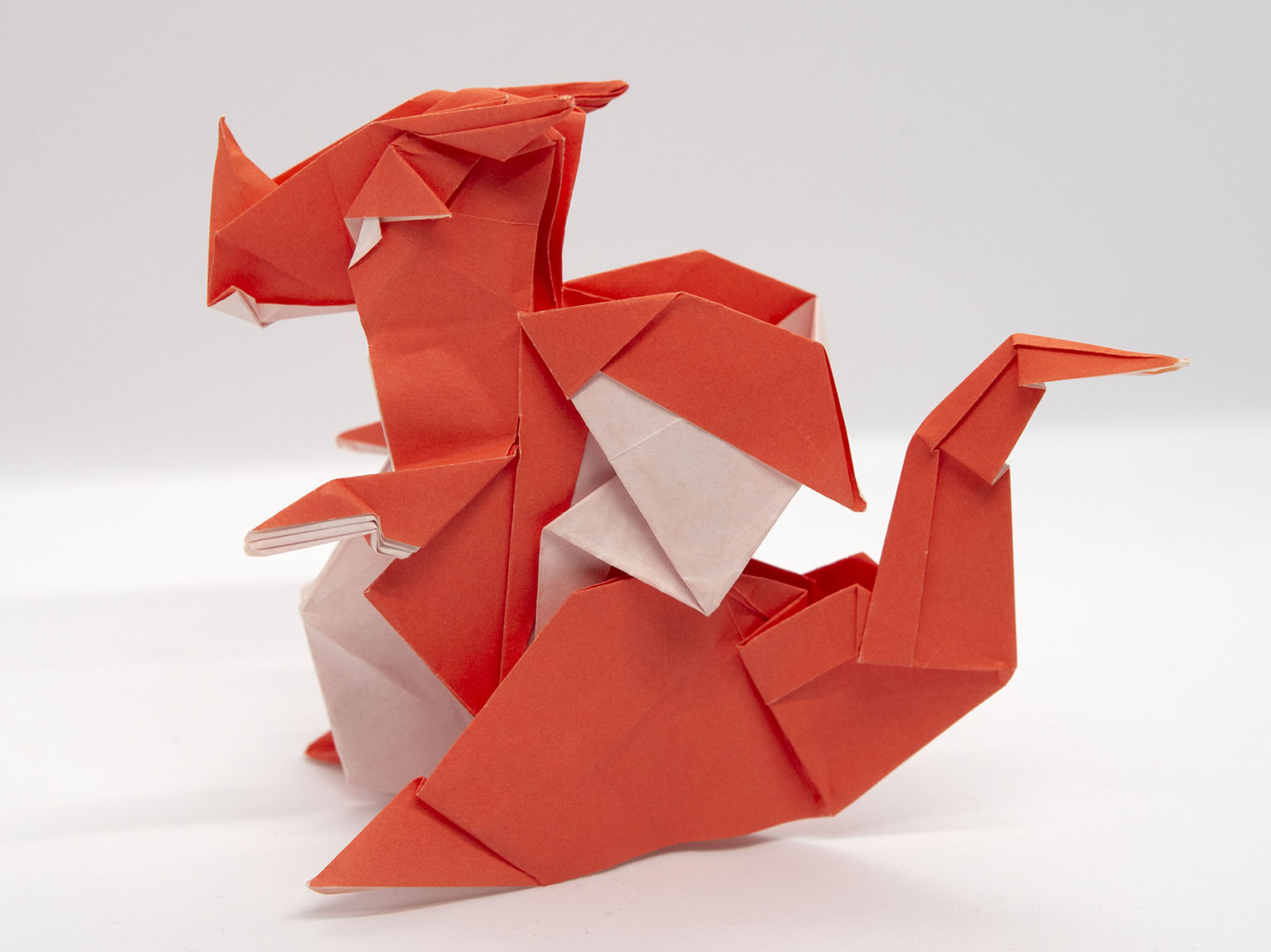 This model caught my eye, and I had to fold it first. You start with 17 steps of precreasing. It is annoying, I admit, but once you reach the multiple reverse folds, you understand how important the creases are. 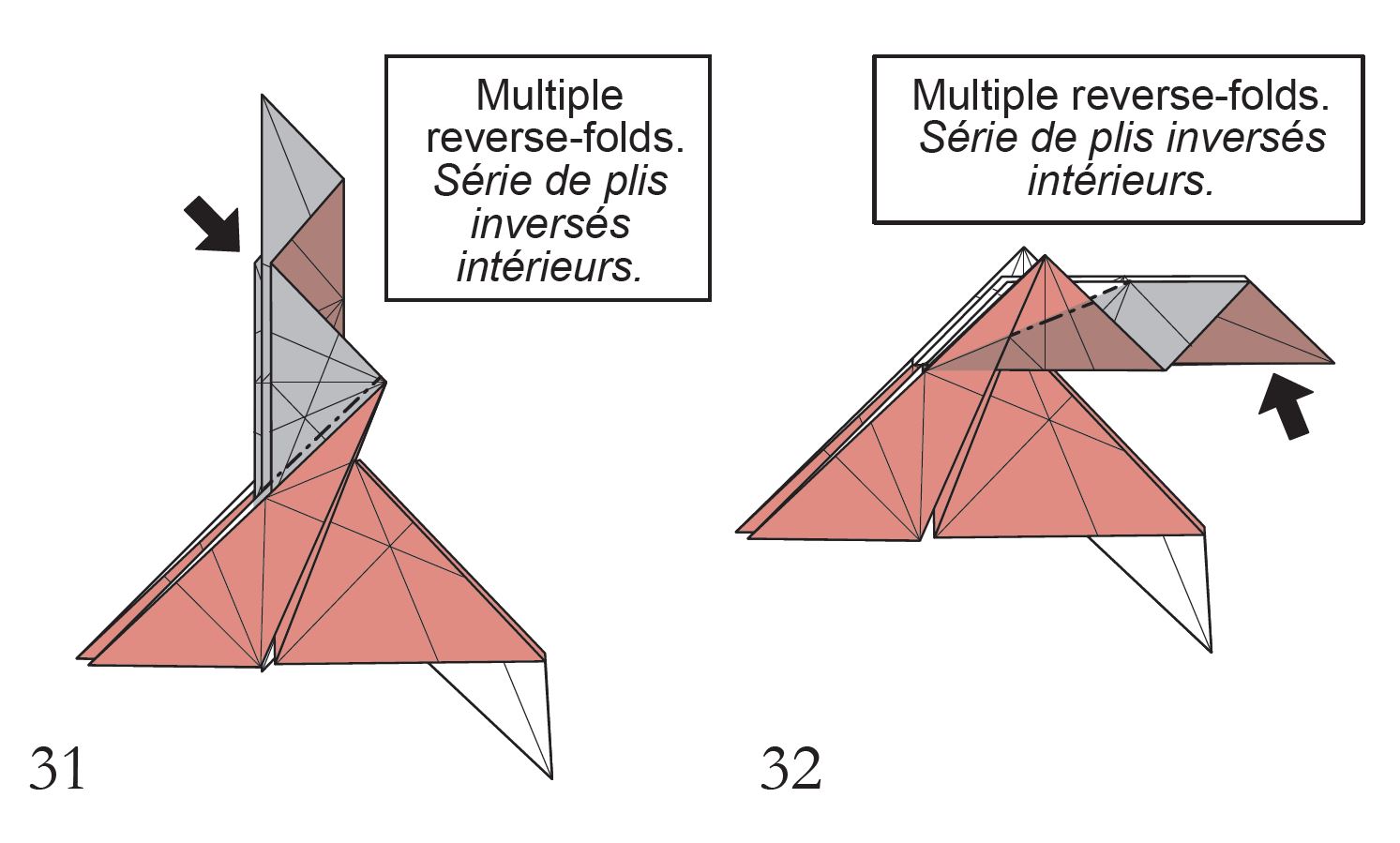 Although the diagram fails to explain the meaning of “multiple reverse folds,” once you take a look at the creases you have, it becomes obvious.

This model has 105 steps, and steps 37 to 63 have to be repeated on the other side. I don’t like this way of diagramming, because once you fold the first part, you have to reverse in your head all the steps for the other part, and since the first side is already folded, the diagrams don’t look like the model you are holding in your hand. I prefer to repeat every step immediately and hope that someday more diagrammers will follow this practice.

The final result is cute and well defined. I had no real problem folding all the way through. 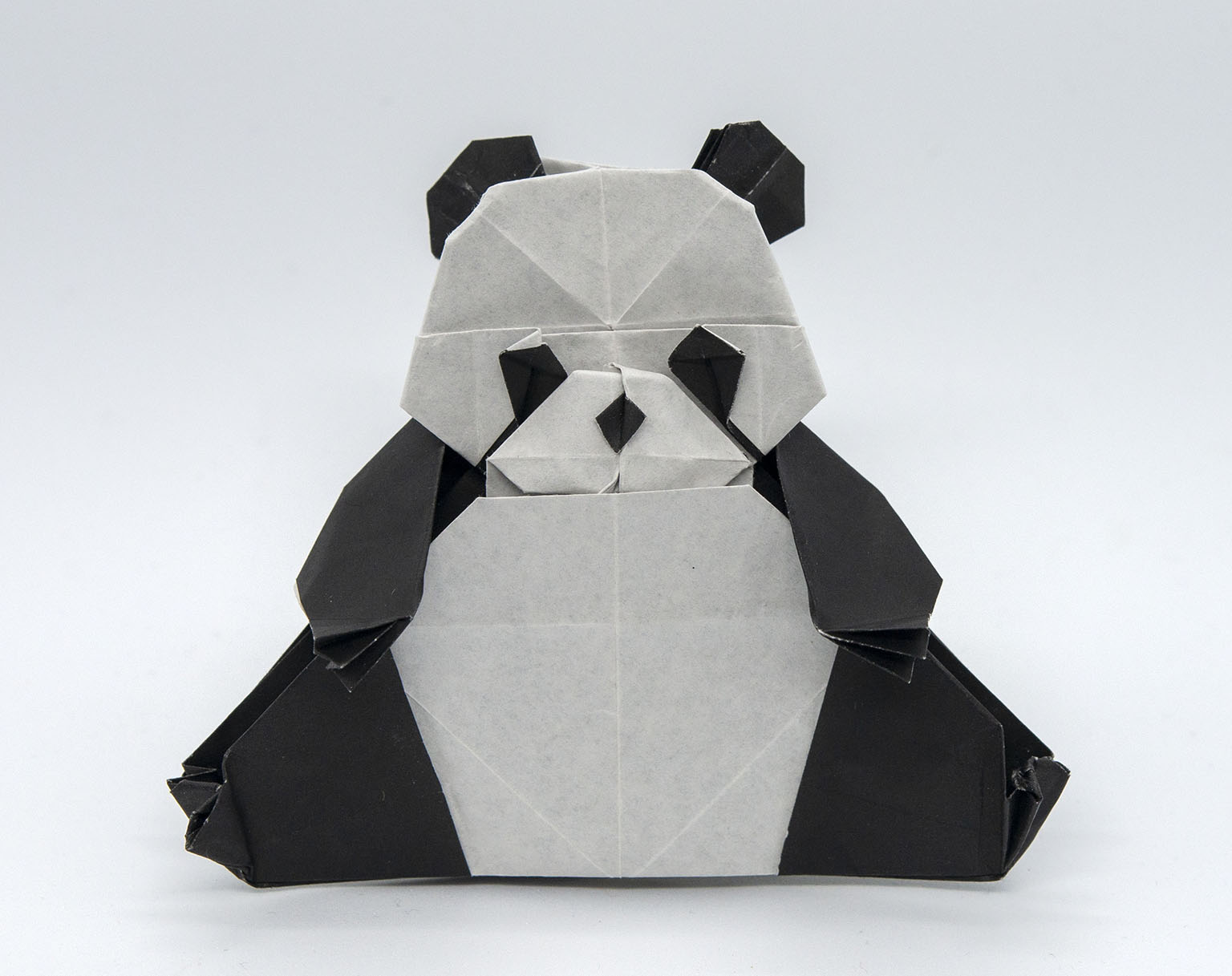 There is a basic cuteness to most origami pandas that is impossible to resist. The same is true for this one.

One hundred fifteen steps did not prevent me from trying, and the only problem I had was that I chose the wrong paper size: 25 cm, instead of the recommended 35 cm. With the smaller paper, it was impossible to open-sink the top of the nose.

This model was very quick to fold — maybe 25 minutes — and the result is delightful! I was surprised to understand the little black point I was working so hard to make (the open-sink) was actually the nose, which came into place when I folded the model in half.

It is a fun model to fold and to enjoy.

Cartoon Frog, from 25 cm kami. Diagrams at bottom of page. Image and folding by Ilan Garibi.

With 69 steps, the Frog took about 25 minutes to fold. Again, you start with precreases, which makes the future squashes easier to handle.

For the most part, the diagrams are clear, but they are accompanied by some acrobatic steps that follow the grid creases. I found this hard to understand when I needed to repeat 16 steps on the other side.

I do like the depth provided by the shadows, which emphasizes the different layers.

The chin is made from two layers (left), but it is not easy to spot that.

Only after increasing the image size on the digital file, could I differentiate between the layers of the head. 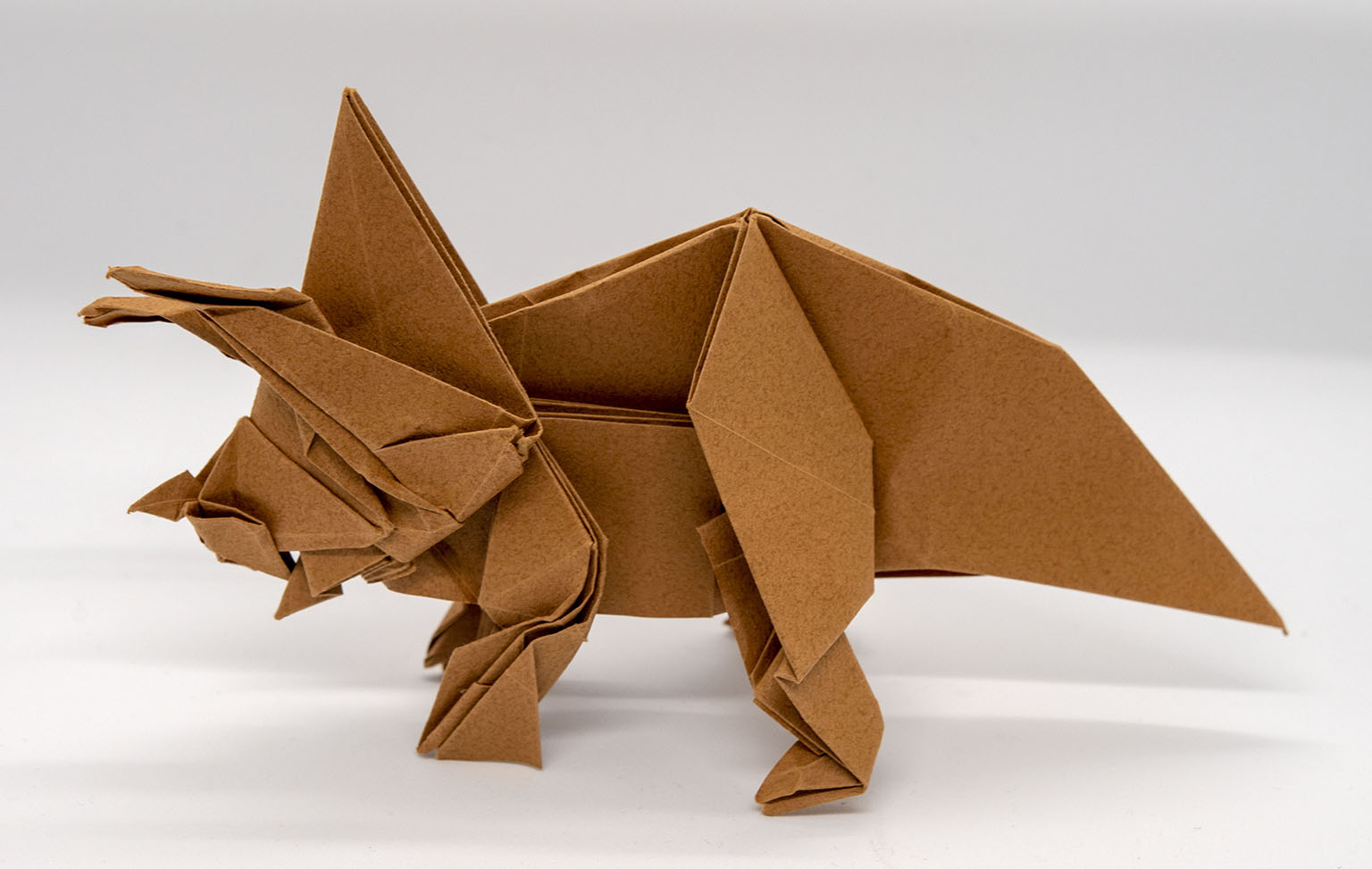 Triceratops, from 35 cm Tant. Image and folding by Ilan Garibi.

This model has no color change and is based on the box-pleating technique.

The first 12 steps out of 104 are precreases, and then the folding sequence starts. 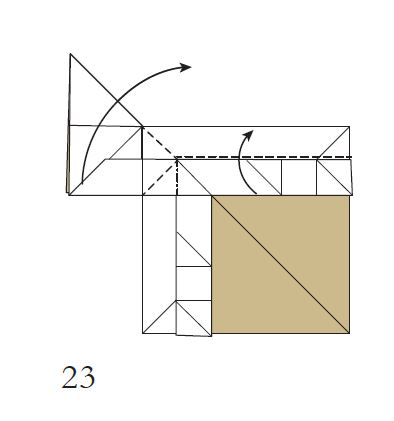 How many layers to raise?

I became stuck quite quickly at step 23. The lower flap that has to be valley-folded up has many layers. How many do I have to fold? I did make a mistake here, and I had to refold everything to find out.

Right after that, you have this step: 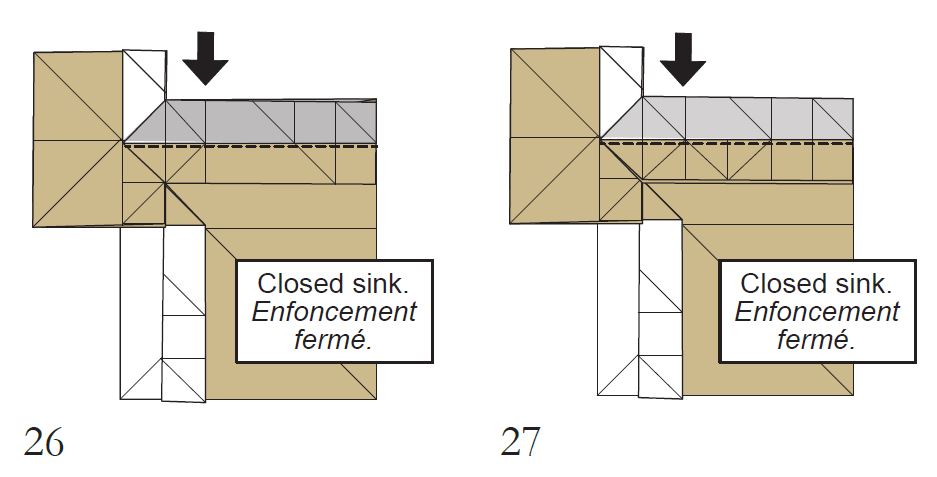 This is not the same step twice!

At first glance, I was sure it was an error in the diagrams, as both steps seem to be the same. Only after a long examination, did I realize that there are two identical layers here, and step 27 is for the back layer.

It could have been so easy to understand if the author had written “Closed sink on the front layer.”

Here, you can also see the only type of mistake I found, where some crease lines are missing on step 26 and reappear on step 27.

The final model has a detailed head and proportional body, and it stands nicely.

Sparrow, from 25 cm washi. Image and folding by Guy Binyamin.

This cute model is fairly quick, with 72 steps and very little precreasing. The model gets a bit thick at the beak and leg areas, but I had no problem folding it from 20 cm kami. The head is slightly open when seen from the front, which is really my only complaint.

What I love about this model is its chubbiness and compactness and the fact that the body is 3D and round, which is what you usually look for in a sparrow design. The color change adds a lot as well. 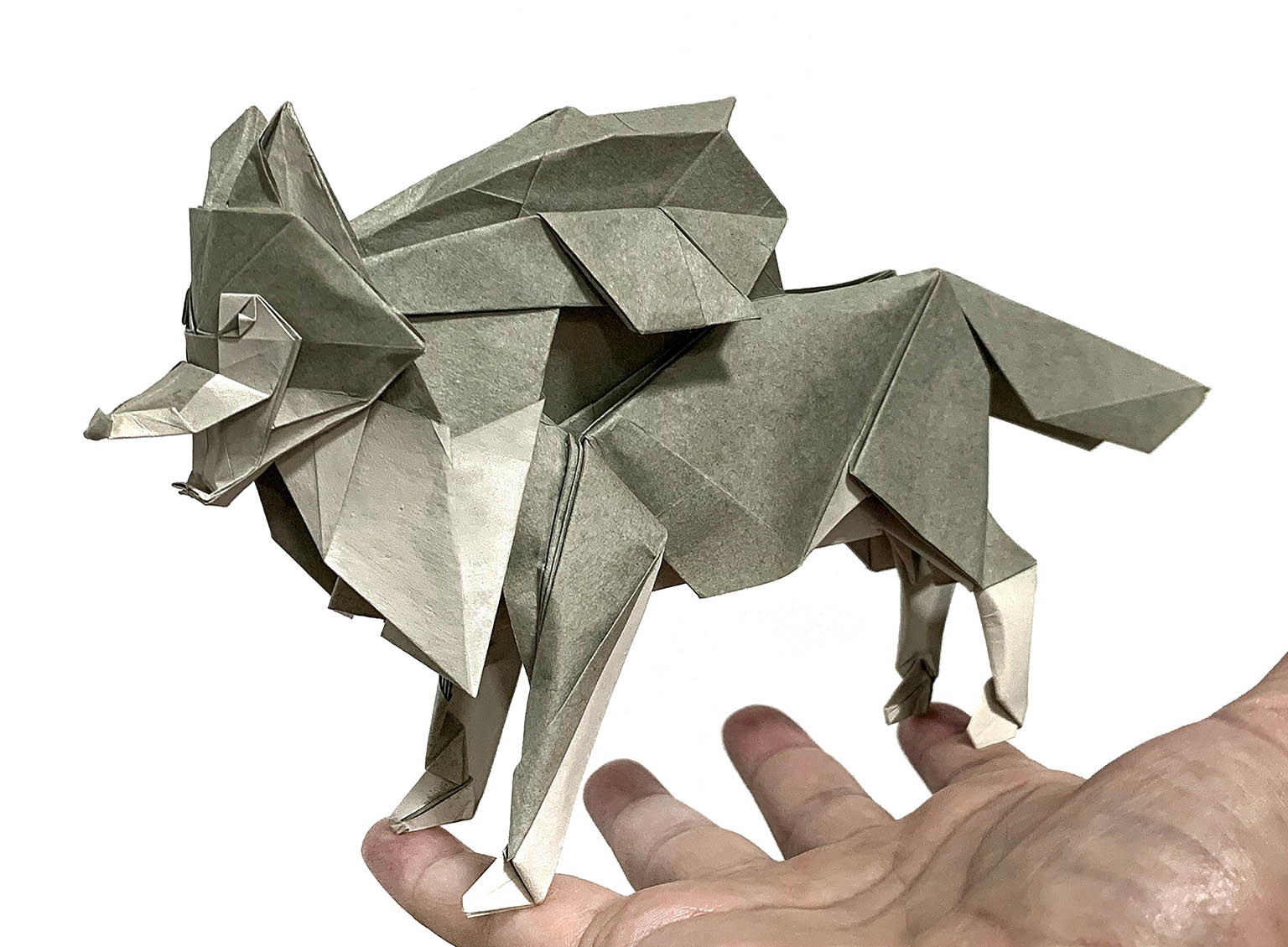 Origami wolves that incorporate a color change are quite rare. Usually, the color change is subtle and is only there for aesthetic reasons. With this model, the bar is raised. The color change here is used to create all the facial details as well as a color variation on the wolf’s fur. And it feels like it was achieved without any “sweat” or overly complex folds.

With 171 steps — 54 steps are dedicated to the face alone, and 33 steps are precreases — this model is not for the faint of heart. After the precreasing is done, most of the folding process is smooth, and there are only a couple of tricky steps.

A maneuver that baffled me for a good 10 minutes was in steps 77-79 where everything is diagrammed from the top. And although the crease patterns for this move were provided, a bit of text or an X-ray view would’ve been helpful. In the end, though, this step was much easier than I thought.

An X-ray view could have helped!

The next challenge came in step 142. By the time you finish folding the head, the front of the model is locked, making this step almost impossible without opening most of the head folds. On my second attempt, I did this crimp before folding the head.

The head should come after the crimp!

But all in all, I have to say it again: This model definitely raises the bar. It’s one of the best origami wolves I’ve seen, using color changes cleverly to bring a lot of character. It also offers much room for shaping of the tail and mane.

It is one thing to create a detailed model featuring a color change. It’s a whole other challenge to do it with ease.

Meng Weining did a great job, creating marvelous, super-refined models. Most of them are enhanced by color changes that seem like they are coming out of nowhere and are achieved almost too easily. These color changes naturally emerge as you fold, making you think, “How did no one come up with that earlier?”

Adding to that, each model is unique, memorable, expressive, and has a lot of character.

Meng’s minimalist approach to diagramming can create a challenge for both new and experienced folders, so pay attention at every step, and always look ahead. There were a few parts where we felt we were slowed down by the diagrams, but it had little effect on the overall experience. 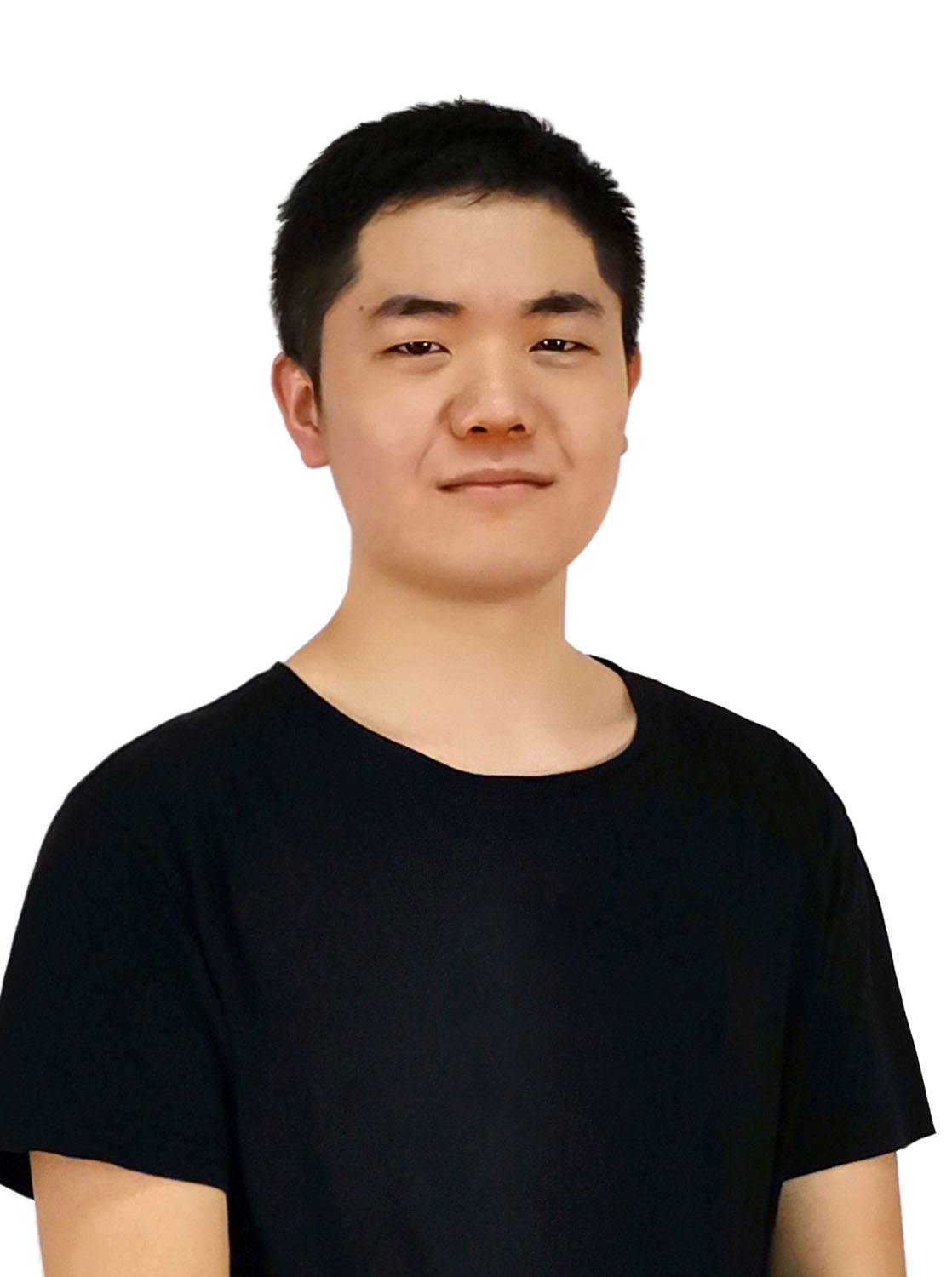 A I am Meng Weining, from Shanxi, China. I learned to fold modern origami in 2010 and designed my first models two years later. Since then, I have designed various models.

A If I can choose only one ... it is difficult to choose. I might choose the Wolf. I am not very good at designing terrestrial quadrupeds. This is a challenge for me. The wolf is the subject I wanted to design a long time ago. This time, I finally made it. I really like the duo-colored head and mane design. This model may be a little difficult to fold, but the final result after shaping is not bad.

A I think it might be Mosasaurus. The Mosasaurus was made after I saw Shuki Kato’s works. His Giganotosaurus has many details, and it almost perfectly resembles a real dinosaur. So I tried to design the Mosasaurus with teeth using Kato’s unique inclined design method. Predictably, the process was quite challenging for me. Finally, it took 43 steps just to make the creases. And the structure of the teeth is a bit small and complicated.

Q What was most enjoyable in the process of making this book?

A It would be when I finished all the work, and now when I see many folders folding my models. Not all the models were designed smoothly. And there are many old models that I upgraded in this book. I was happy when all the work was completed. I enjoy challenging myself.

Lastly, here is a taste from the author: diagrams of the Cartoon Frog. Try your hand at it! 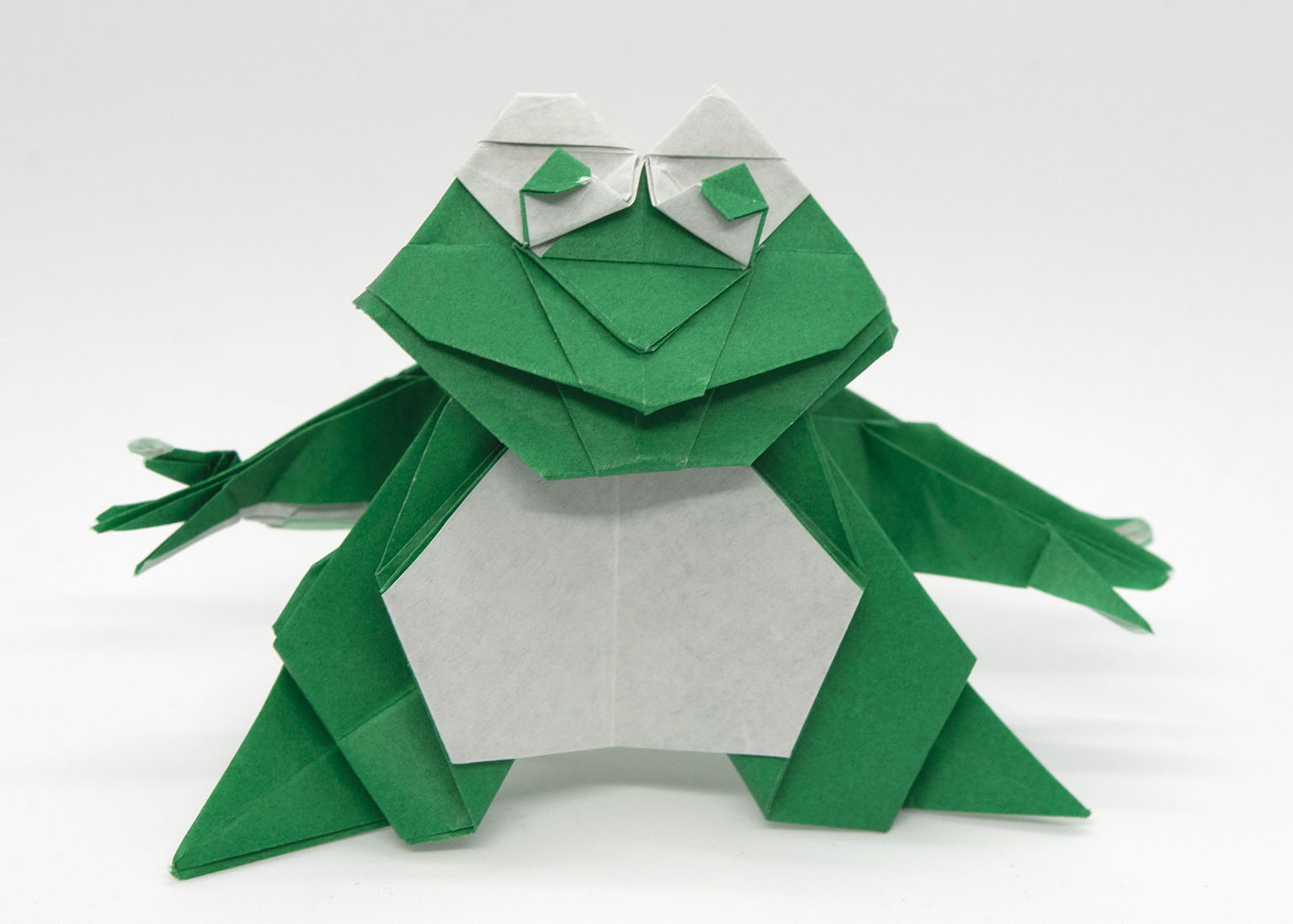