The Complete Blintz Part 4: The Dragon and the Might of the Blintz

In the History of the Blintz, we saw how the blintz enabled people to design origami animals with more flaps. In this article, we shall look into this in some more detail using a dragon I designed in the early ’80s. Photo folding instructions of the dragon are available as a PDF.

The dragon is based on ideas in the Flying Pegasus1 by Edward Megrath. 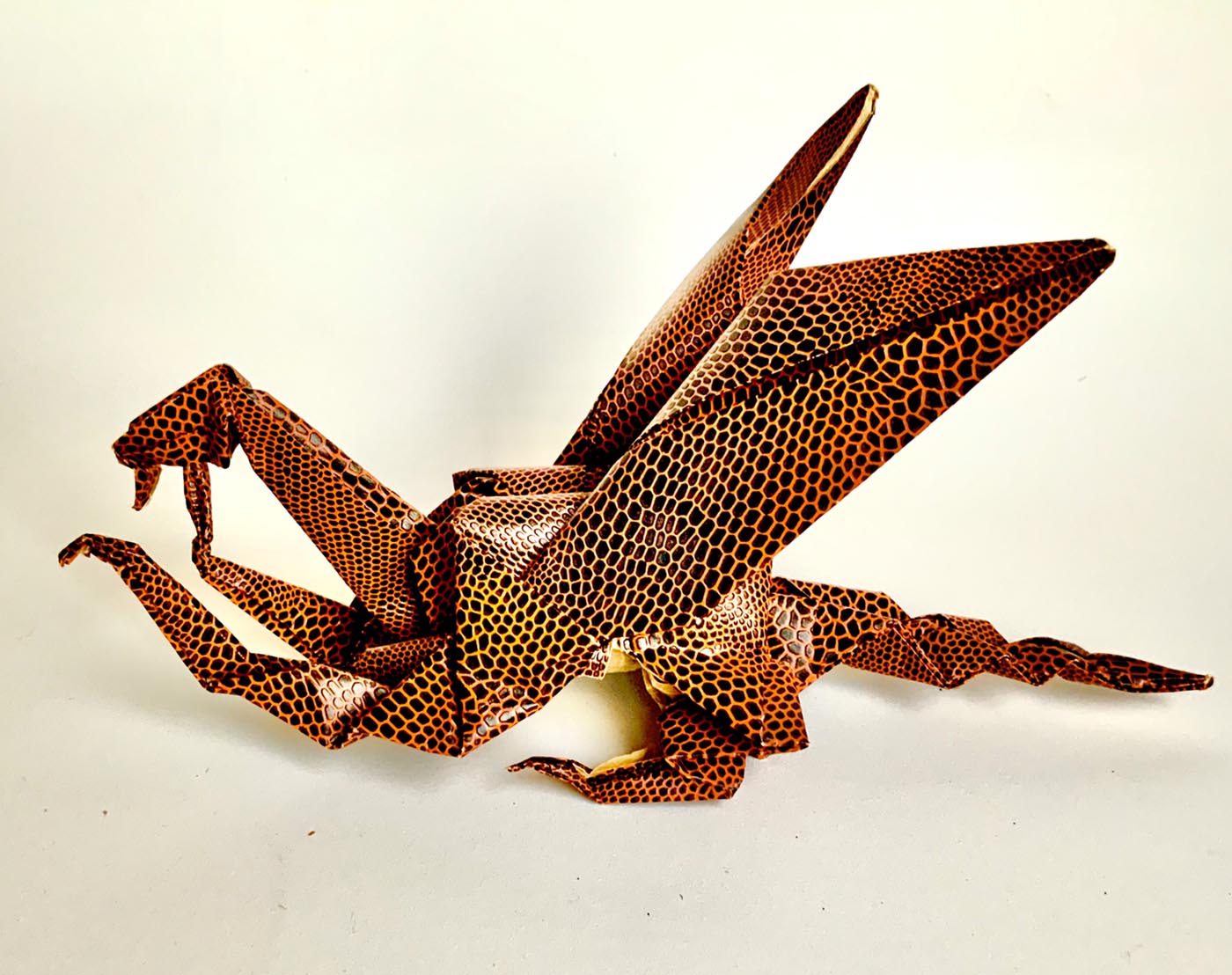 Dragon inspired by Smaug from “The Hobbit.” Design, photo and folding by Hans Dybkjær. Folded from the flying pegasus base. See PDF diagrams of dragon.

The dragon basically is a four-legged crane. The folding starts with the blintzed square base2 and continues through the stages illustrated in the crease patterns below.

Left: Blintzed square base. The circles represent the eight flaps we are going for.
Right: Blintzed bird base. Note how the pattern is mirrored in the blintz flaps.

Note the complex center of the latter two crease patterns. Could we have obtained the eight flaps directly from the blintzed square base or the blintzed bird base? It turns out that the answer is yes and no.

Yes: As seen in the crease patterns, we can formally achieve this. But no: Basically, the center is the same length as the flaps and ends up locking two of the flaps together on each side. You can see this in the left photo below. 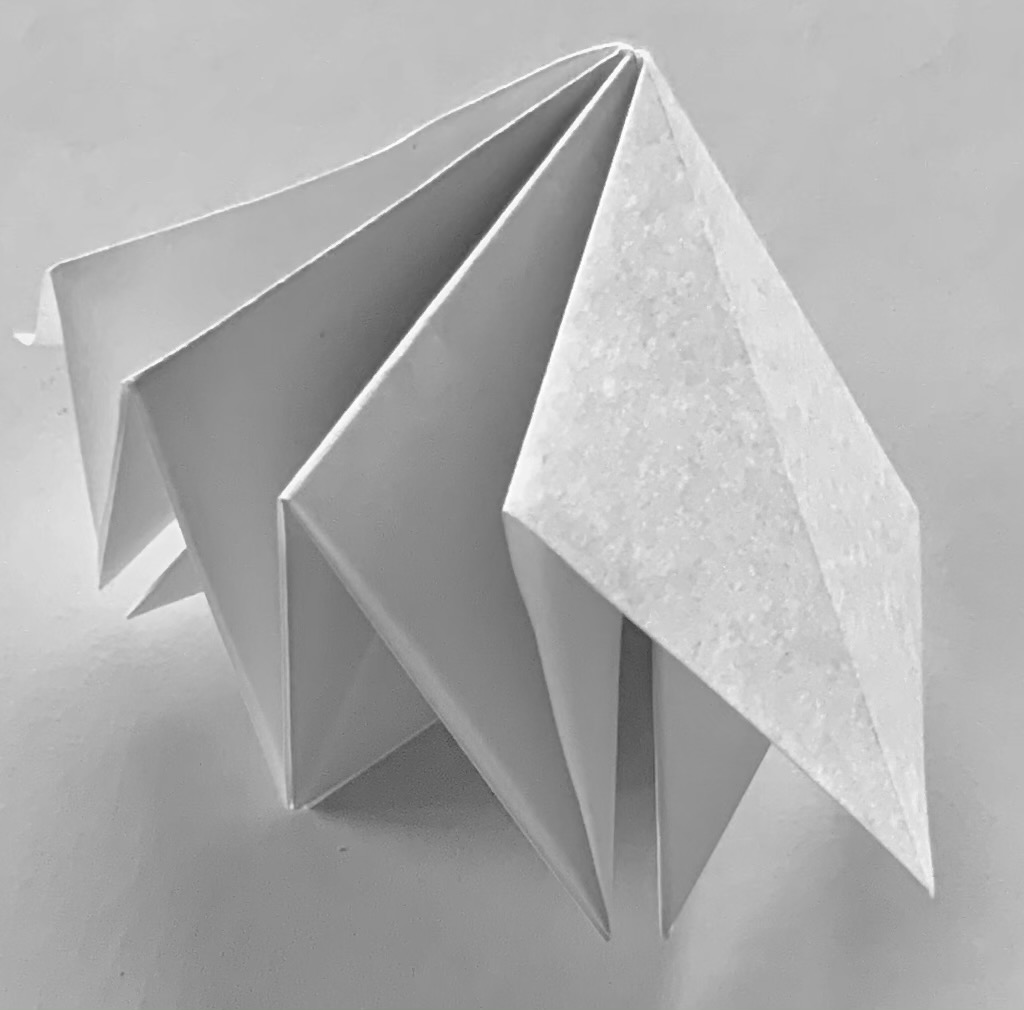 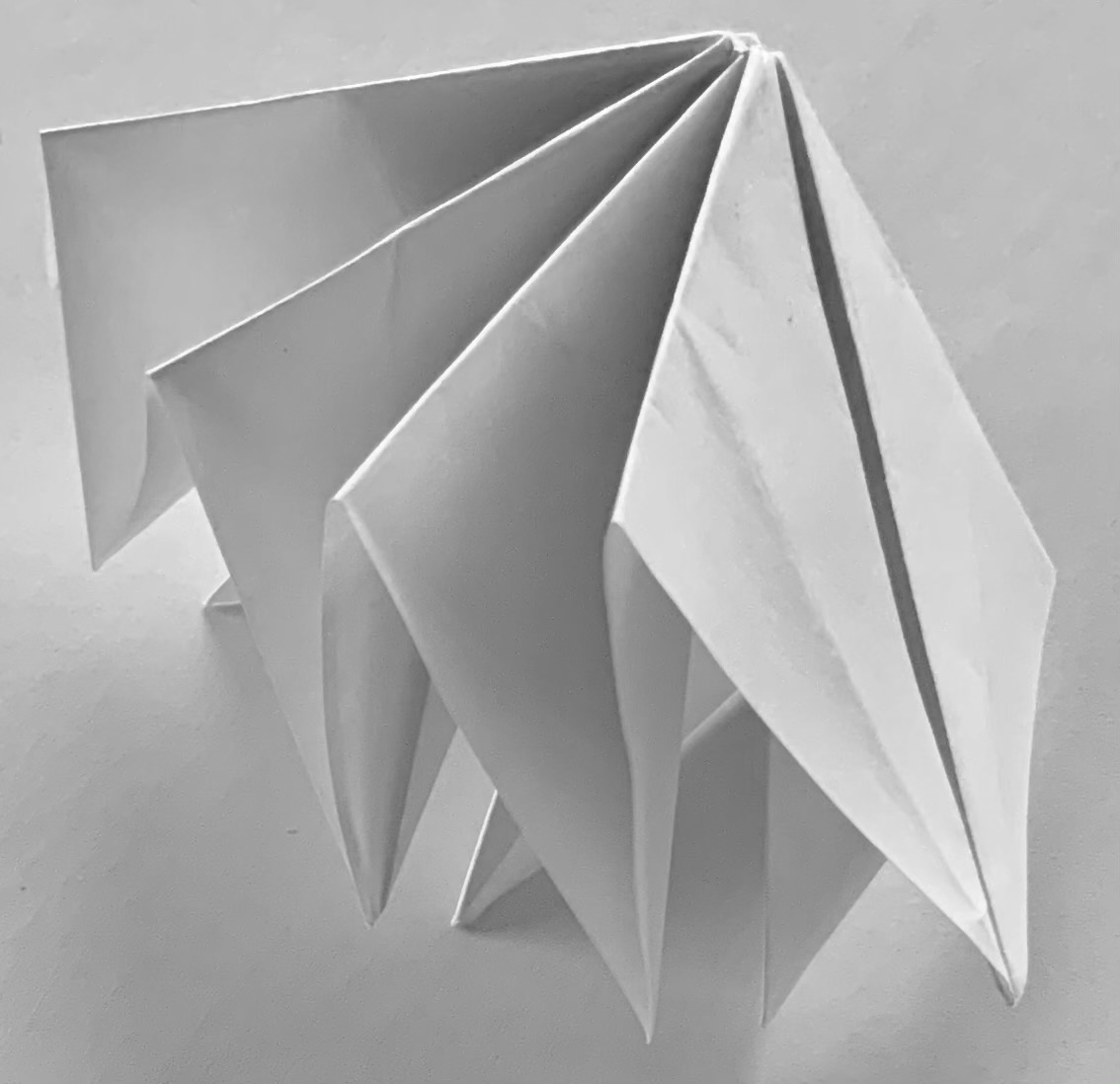 Left: The square-base blintz will lock the folds, and the dragon cannot be folded.
Right: In the dragon base, the flaps end up independent of each other.

Comparing the Blintzed Lily Base

Another example is a blintzed lily. 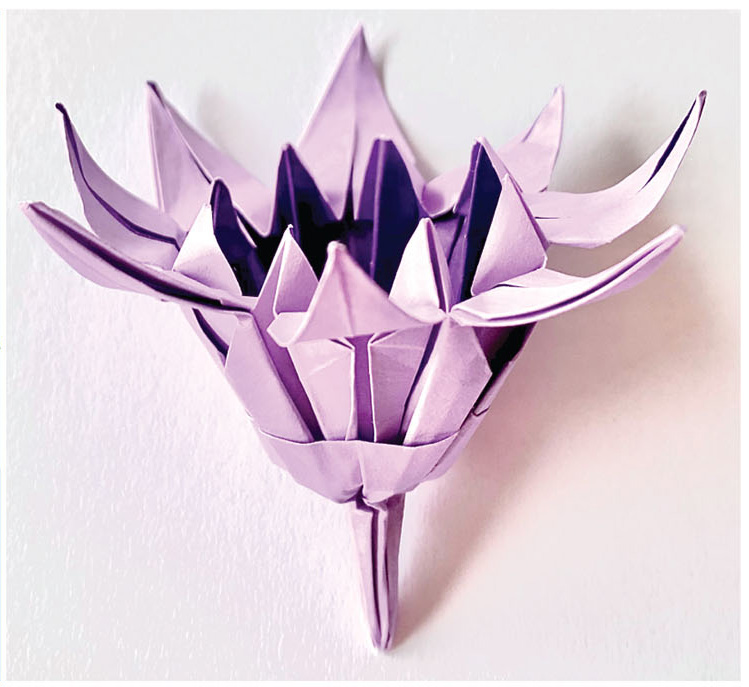 This model goes through the stages of the crease patterns below.

Left: Eight lily-base flaps on the lily base.
Right: Crease pattern of the blintzed lily.

Note how this is folded directly on the lily base, sinking the bottom of the blintz flaps inside the lily. Could we have done this with the dragon?

Again, the answer is no. The illustrations below show that yes, the flaps occur freely and may be folded independently. But no, the center, or “body,” becomes huge compared to the flaps, which is not what we want. The dragon base above ensures a square base and a bird base with all eight flaps having a full degree of freedom, essentially by sinking the center into something that lowers itself below the flaps and without locking neighboring flaps. 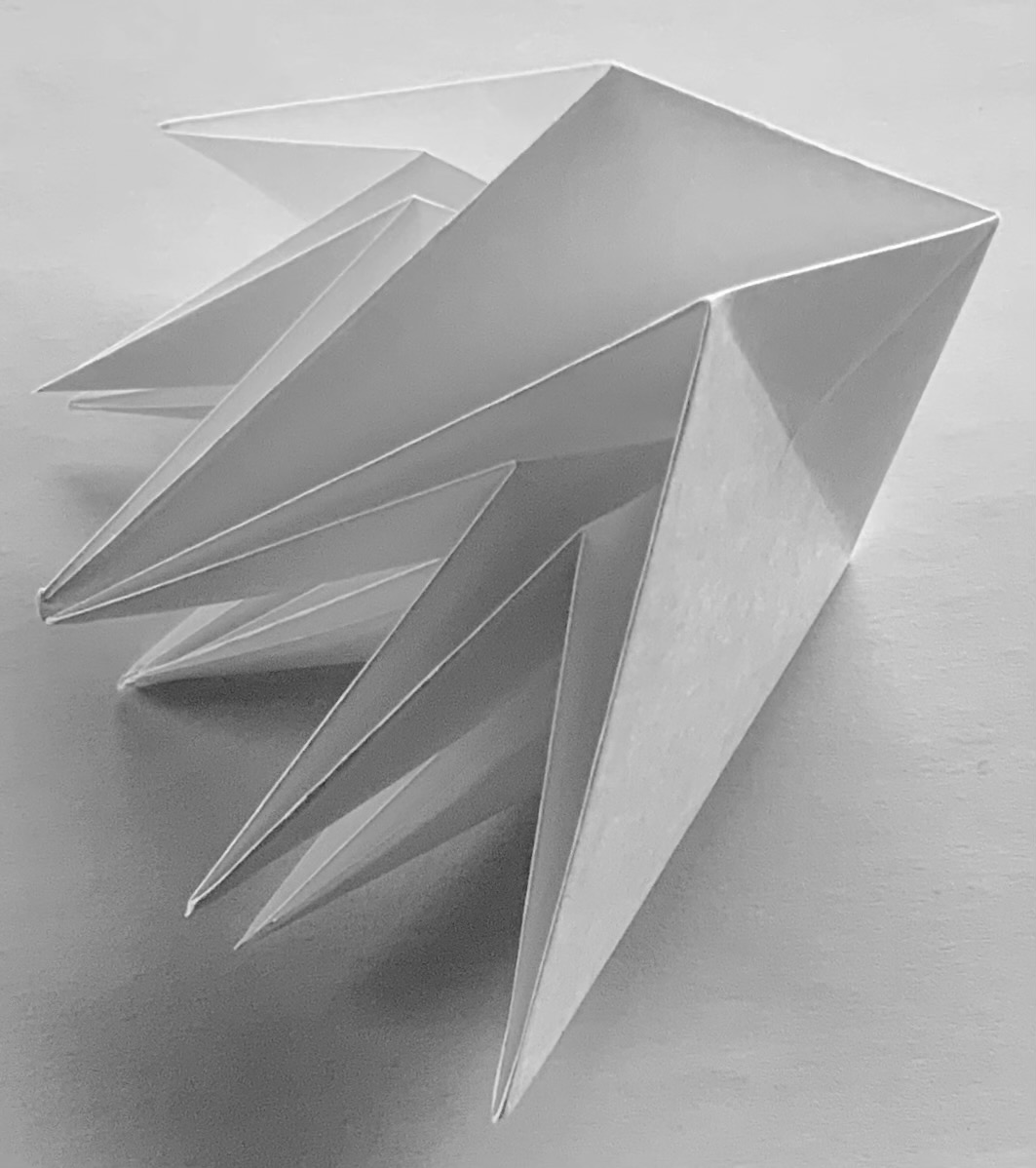 Of course, a big center and eight flaps around it makes for a nice octopus doodle: 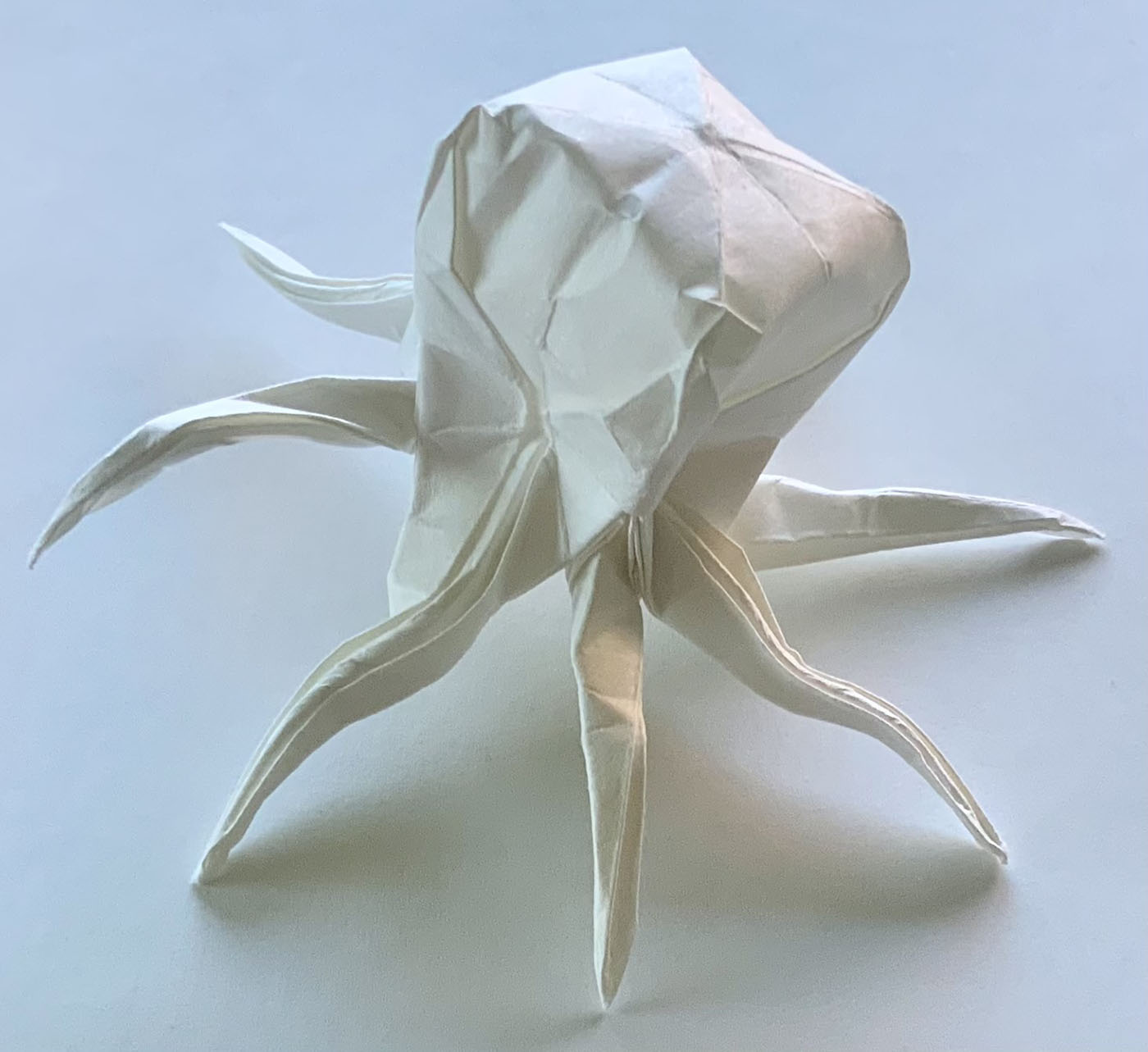 All of the standard bases end up having an inside and an outside, typically with the front of the paper covering the outside. The blintz is done before folding the base, and we have a choice between blintzing on the front side or the back side of the paper. 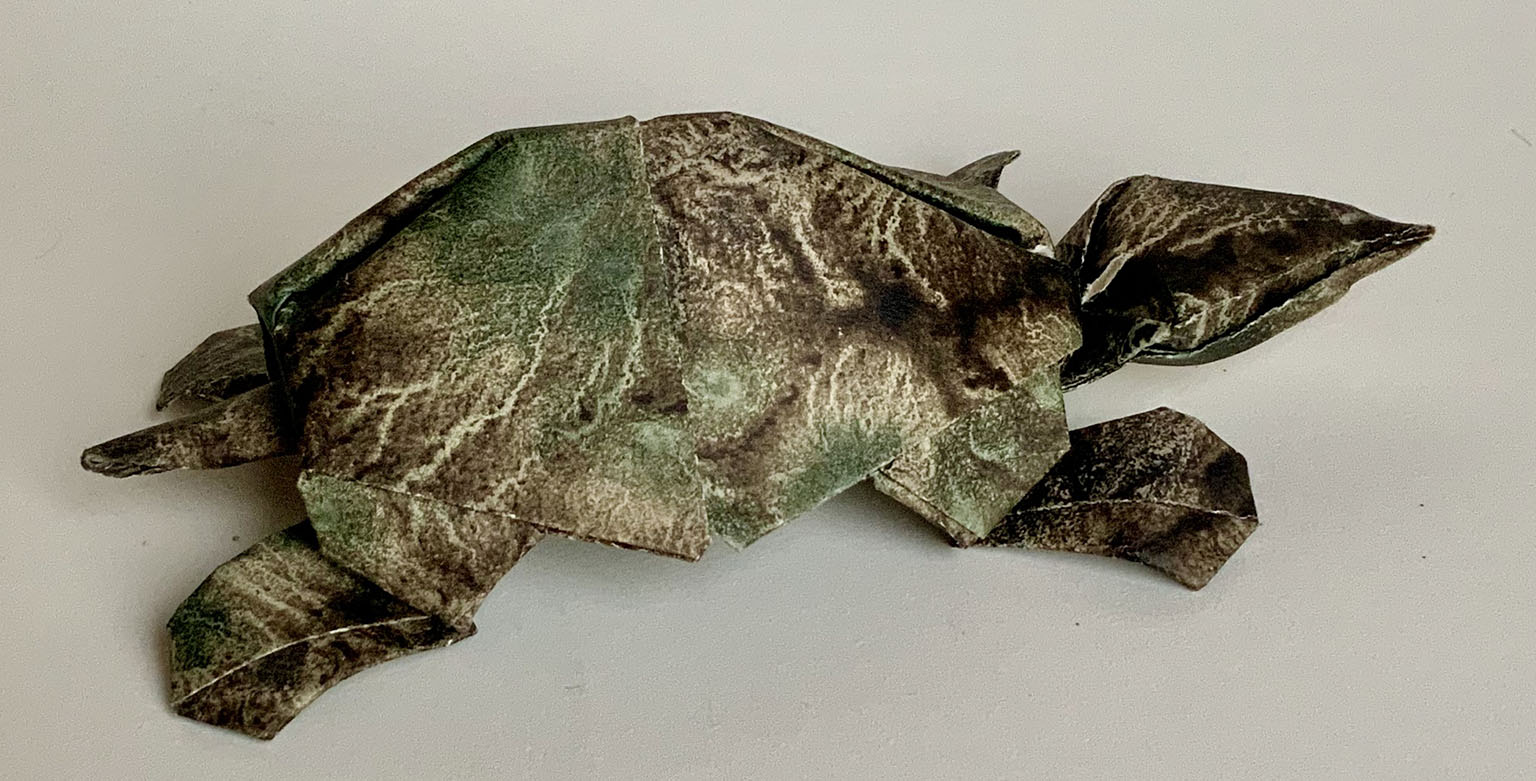 Pat Crawford’s iconic turtle3 is a great example of an inside blintzed bird base. The blintzes become the four feet of the turtle, whereas two of the bird base flaps become the head and the tail, and the two others become a sturdy lock on the underside creating the 3D shell.

In both the turtle (inside blintz) and the dragon (outside blintz), the blintz flaps end up being pulled out to the same position. So why choose one over the other?

Hence, the choice between inside and outside blintzes for these two models depends on accuracy and on the convenience of the folding sequence.