The source of it all 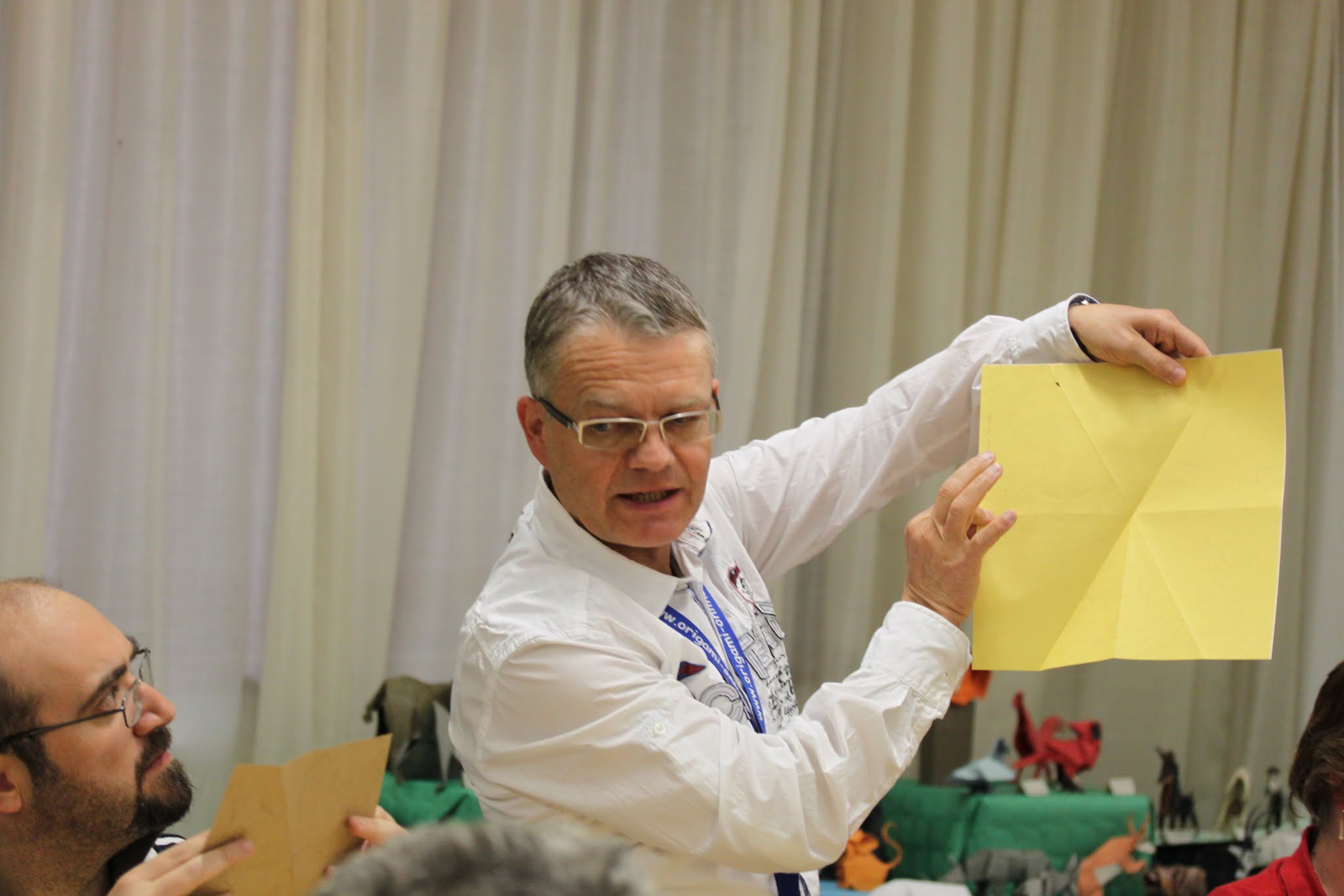 3 years ago I have been taught by Gila Oren to fold my first ever tessellation. A day after, failing to restore the right process I came with a totally different result. I called Gila and told her just so, quite angrily. “Wonderful”, she said, “you have created a new tessellation”. The model I failed to remember and reproduce was Star Puffs, by Ralf Konrad, so now you can imagine what I felt when the first person I met outside the Grand Hotel Terme Astro was him. We have been introduced by Robin Scholz, a brilliant tessellator and a dear friend.

What a great start for my second Italian convention! Located in a small town, called Tabiano Bagni, it is a two hours drive from Malpensa airport, in Milan. You may wonder why I chose to once again be in the CDO convention and not to try the Spanish, British or the American way of folding, but for me it is a natural conclusion. In no particular order, here are my reasons.

The Province of Parma

By the Italian law, only a cheese that was made in this area can be called Parmigiano-Reggiano, and our hotel is located just there. Since no other qualities of this area are of any interest to me, my only chance to enjoy it was during lunch and dinner. I admit, I have a soft spot for parmesan, and I fully exploited the bowl of grated cheese that was on the table. The price includes full board, with three meals a day, giving me many encounters with this lovely, unfolded, bowl.

Trapping the finger of Jun Maekawa 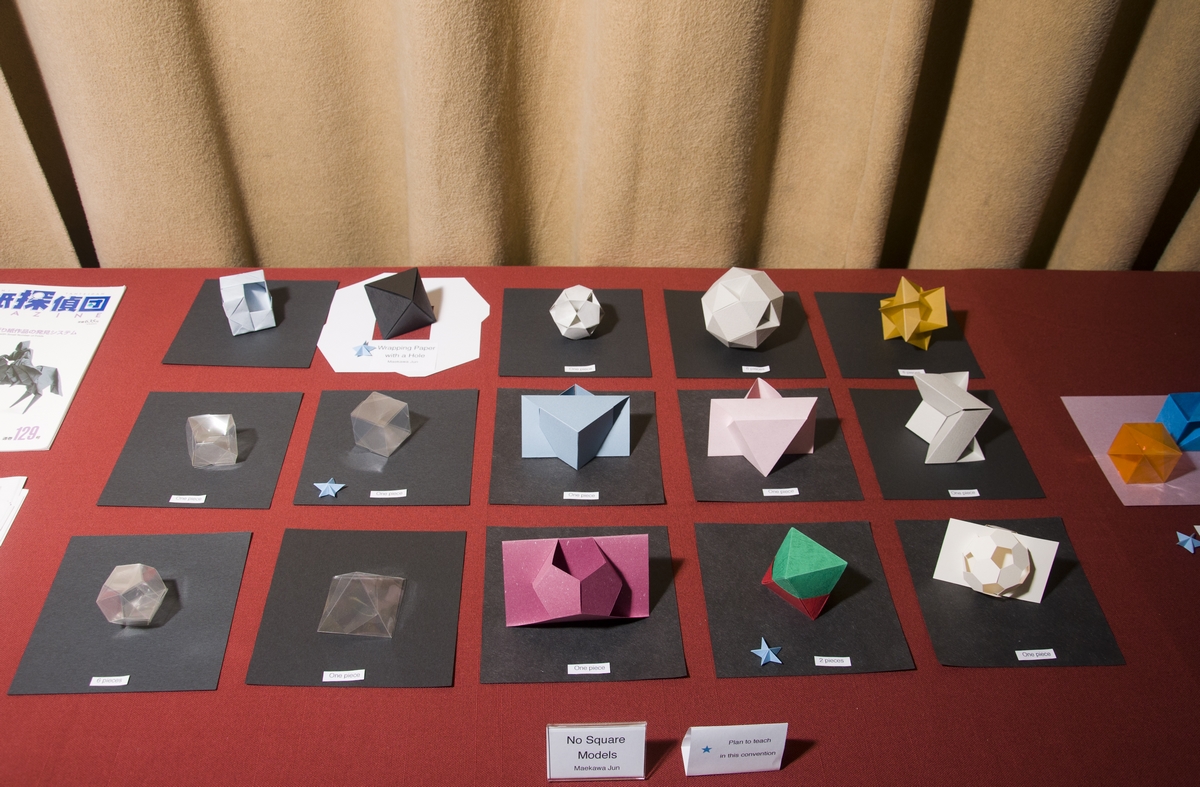 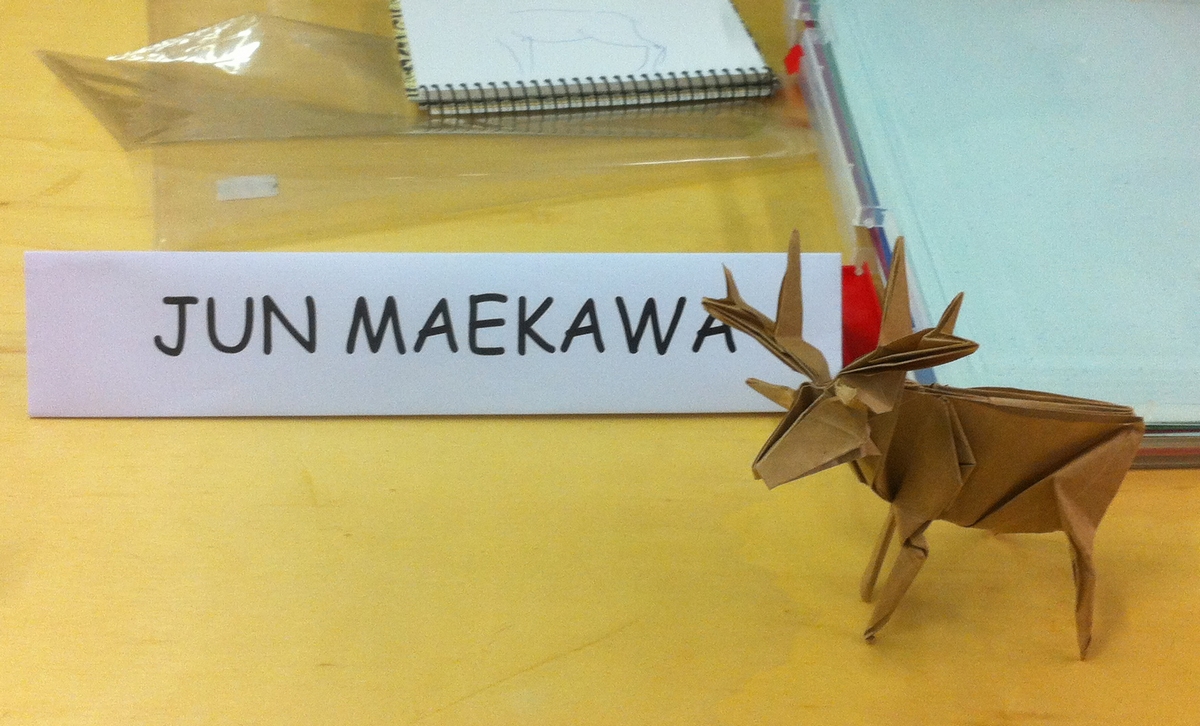 Three guests, no less, were invited by the CDO. Like every year, we had a contest, but with no definite subject - just a restriction of the paper to be used - A4 (or any other size with the A proportions). With this theme for the convention, Jun Maekawa, Japan, was the perfect guest. Mr. Maekawa, who just published his sequel to Genuine Origami, called brilliantly Genuine Origami √ 2, dedicate this book to the A proportion, and his table was labeled with “No square models”. 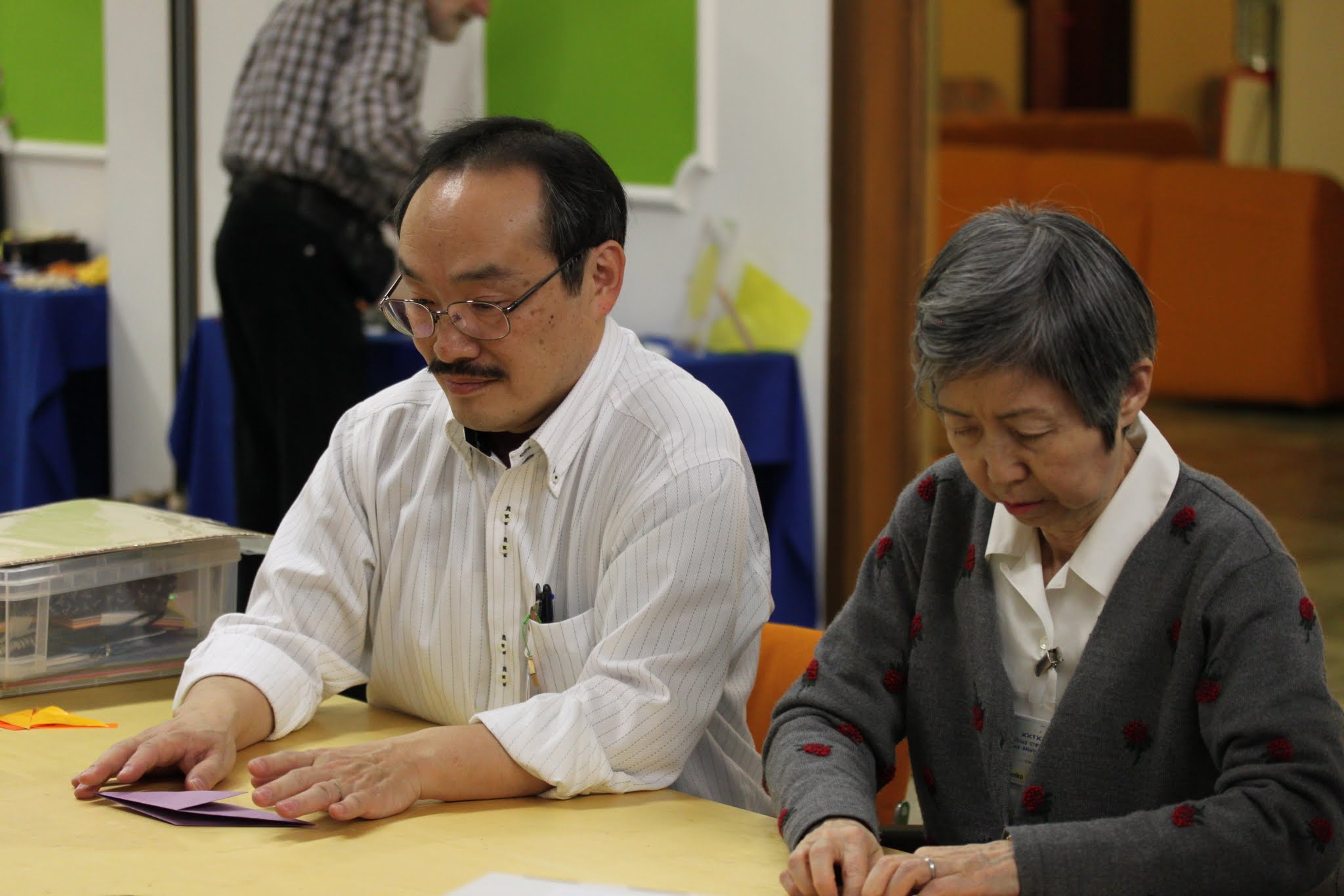 Sumiko and Jun Maekawa, during a lesson (Photo by Gerwin Sturm, Austria)

His classes included a Deer and a 1/3 Cube, showing his vast variety of models. The deer is a brilliant model, with a mathematic precision, only easy steps, and an amazing graceful result. His 1/3 cube is a perfect example for his cleverness in getting the A proportion out of a square. Off classes, Mr. Maekawa enjoyed to mingle, allowing all who wants to have a small talk with him. This was when I managed to present him with my Finger Trap, and to be extremely happy when he smiled at his trapped finger.

Can it be simpler than that?

My first ever wet folding model was Polar Bear, by Giang Dinh, USA. I was amazed to hear that the creator was aware to that, since he saw it on my flickr site. Mr. Dinh may be as far as possible from Mr. Maekawa in his art. While the last asked us, jokingly, of course, to “fold the corner to a point 2.3 millimeters below the crease line”, the classes of the first were filled with “about here”, “just a little” and “shape it to your liking”. Seeing Mr. Dinh models, the way he folds during the master workshop, and his genius idea to present the process of his folding in six steps, each is showed by a different piece of paper, I realized how amazing his art is. A sleeping bear, a person lying on a rocking bed, a mother and daughter are a few examples. Mr. Dinh also gave a presentation, with some deep understandings and the source of his creation, from Zen to motherhood and the circle of life. 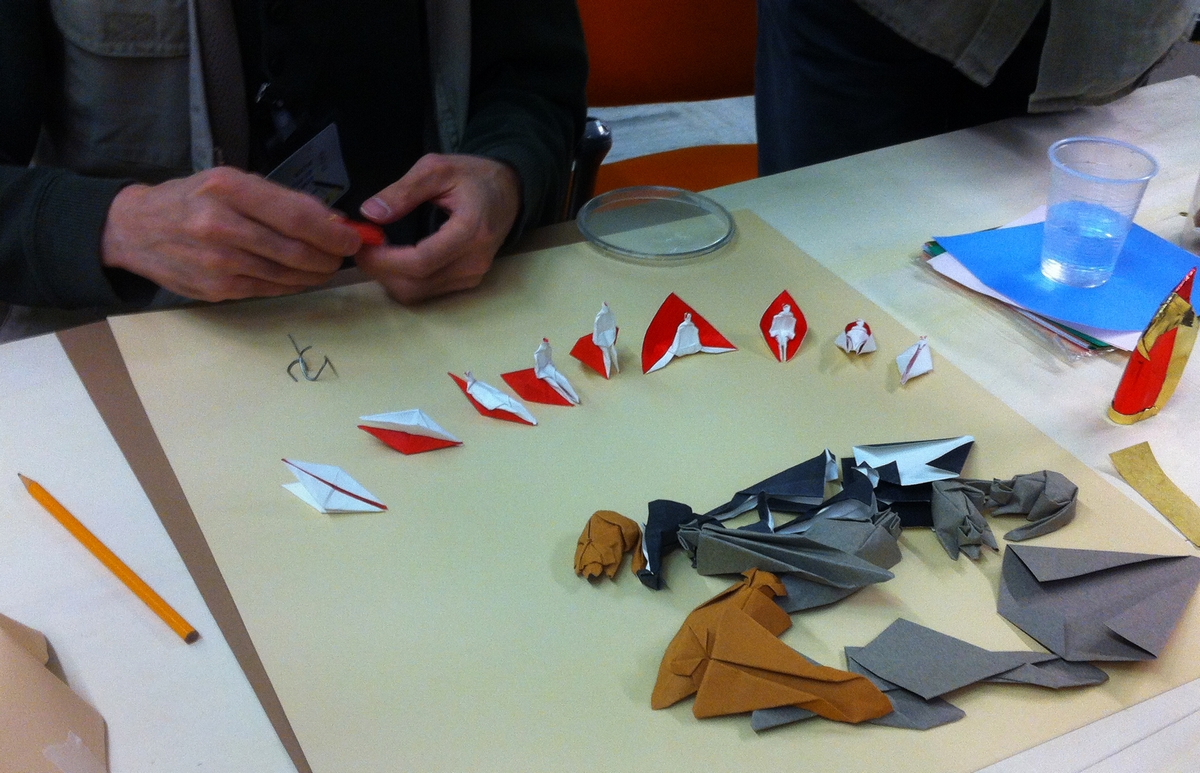 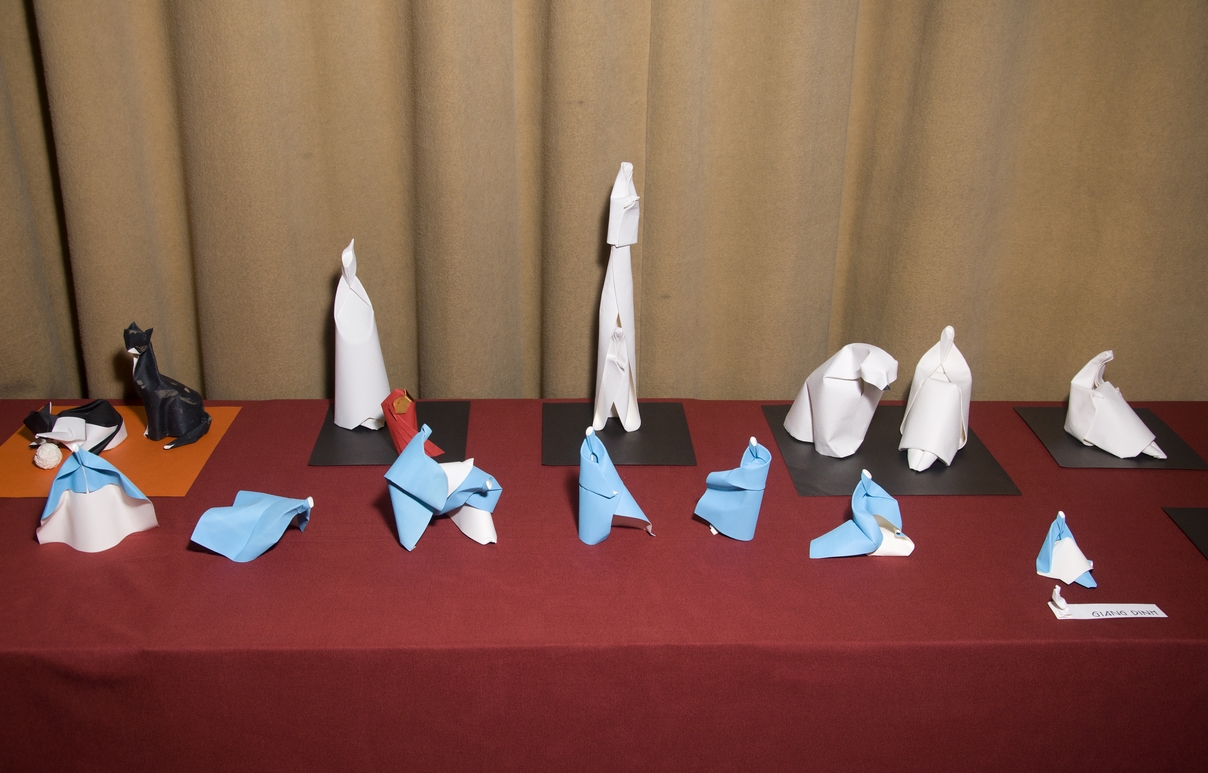 The table of Giang Dinh (Photo by Garibi Ilan)

As a tessellator, my models are always based on straight lines and exact reference point. So I was a bit skeptic when I joined one of his classes. But all worries were in vain, since this guest is a perfect teacher. Staying in the big hall before and after his classes, you could see him sitting one on one, and teaching his elegant models.

No iron is needed 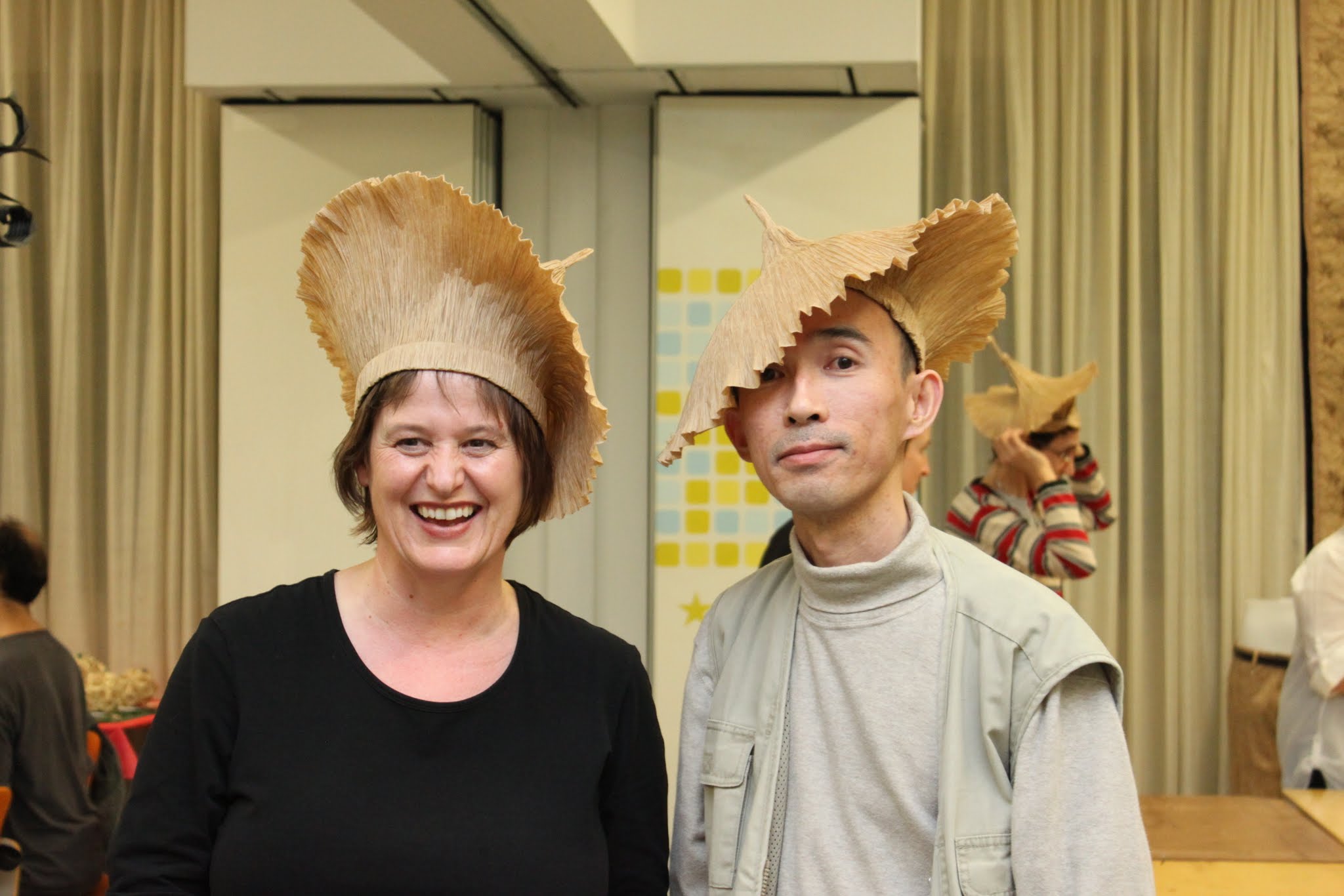 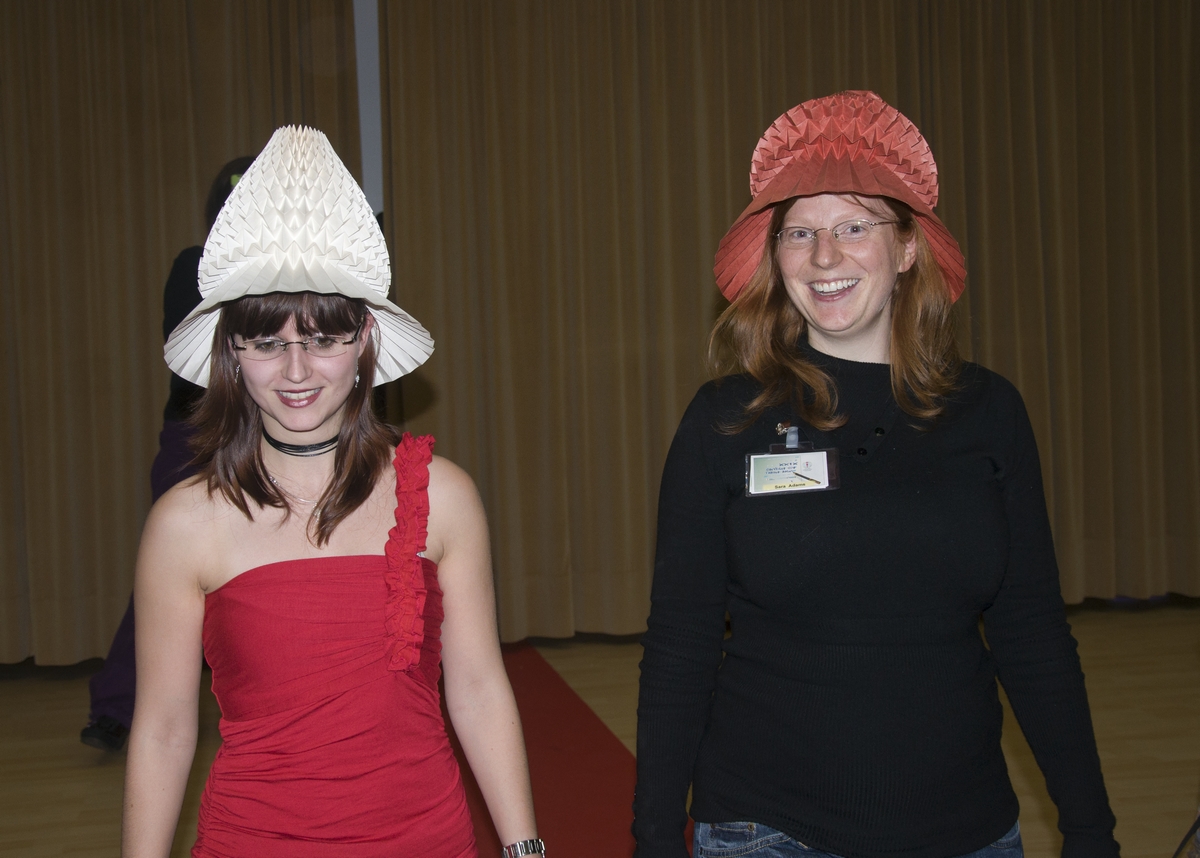 Being lucky is a talent in itself. And lucky I was when a few weeks ago a student of mine made a hat out of my latest model. It was a lamp before he tried it on his head, and finally I got my model for the fashion show “A Dress for Annette”, that was organized by the CDO In memory of Annette Hassenforder. Although it was presented by two beautiful models, I had no chance whatsoever to top the amazing fashion show, given by Paul Hassenforder, France. One by one we were stunned by his dresses and hats, presented by glamour local models, including super models from the head office of the CDO. Using large format of thin Kraft paper, his workshops were spread over half the hall, quite noisy and overcrowded. 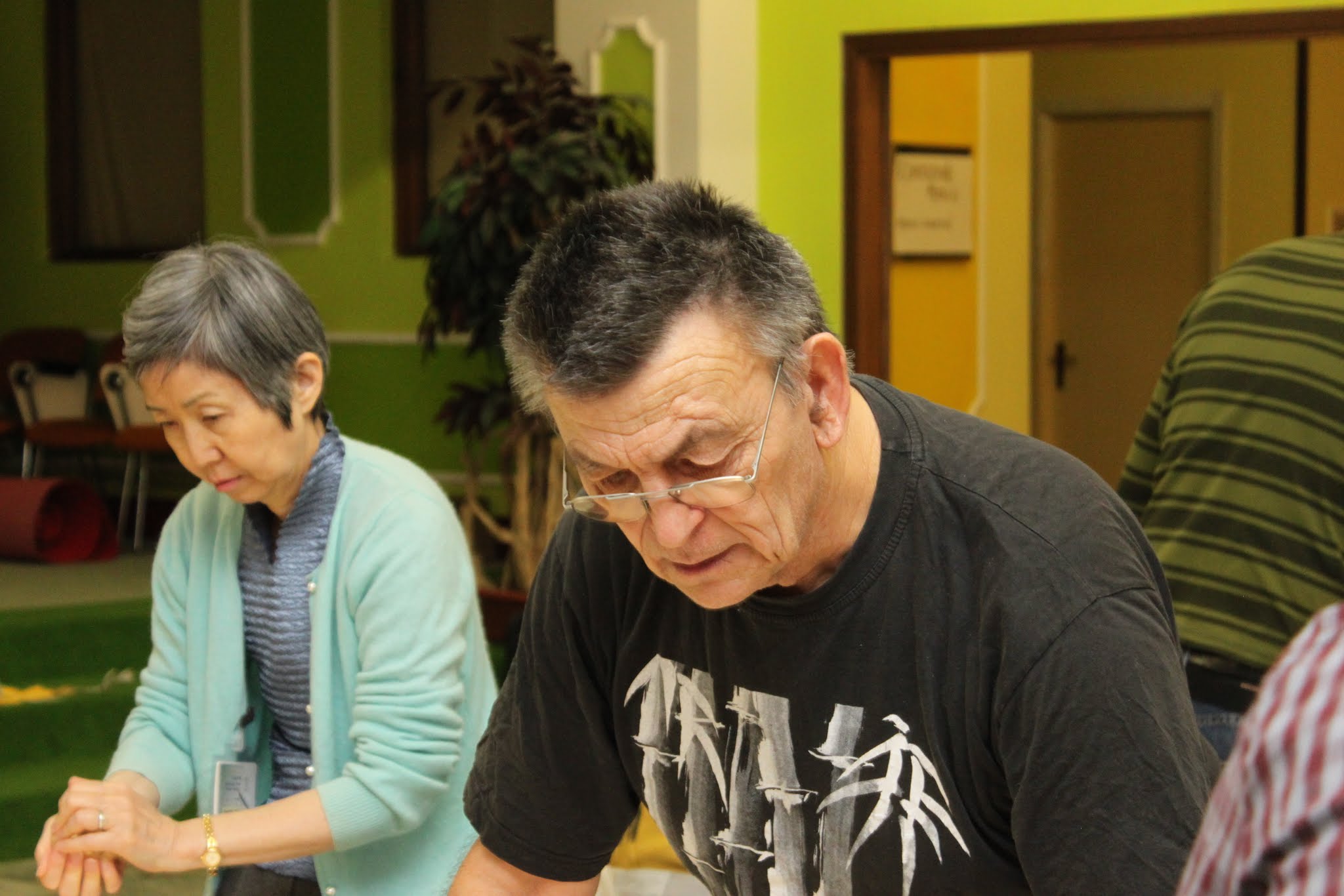 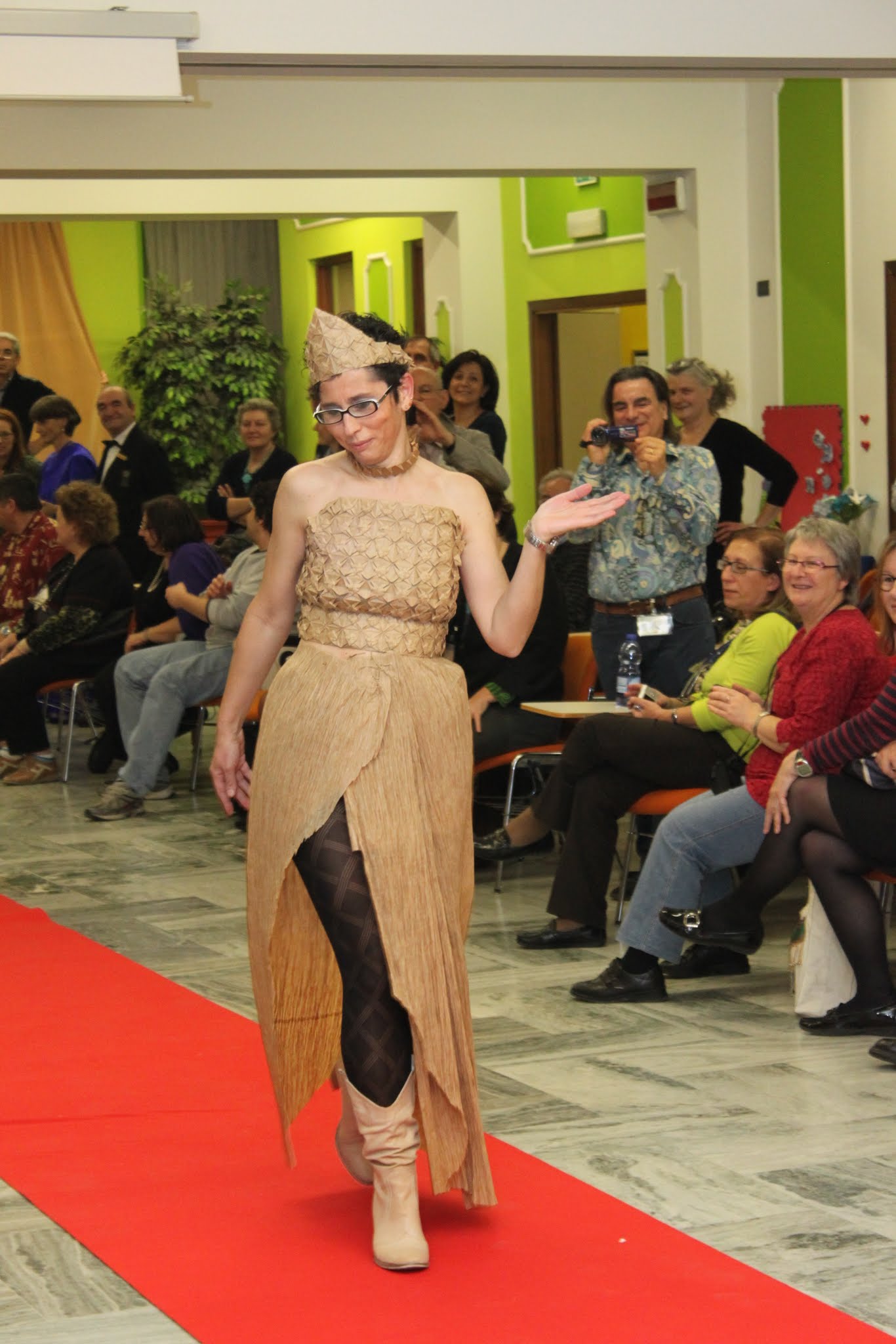 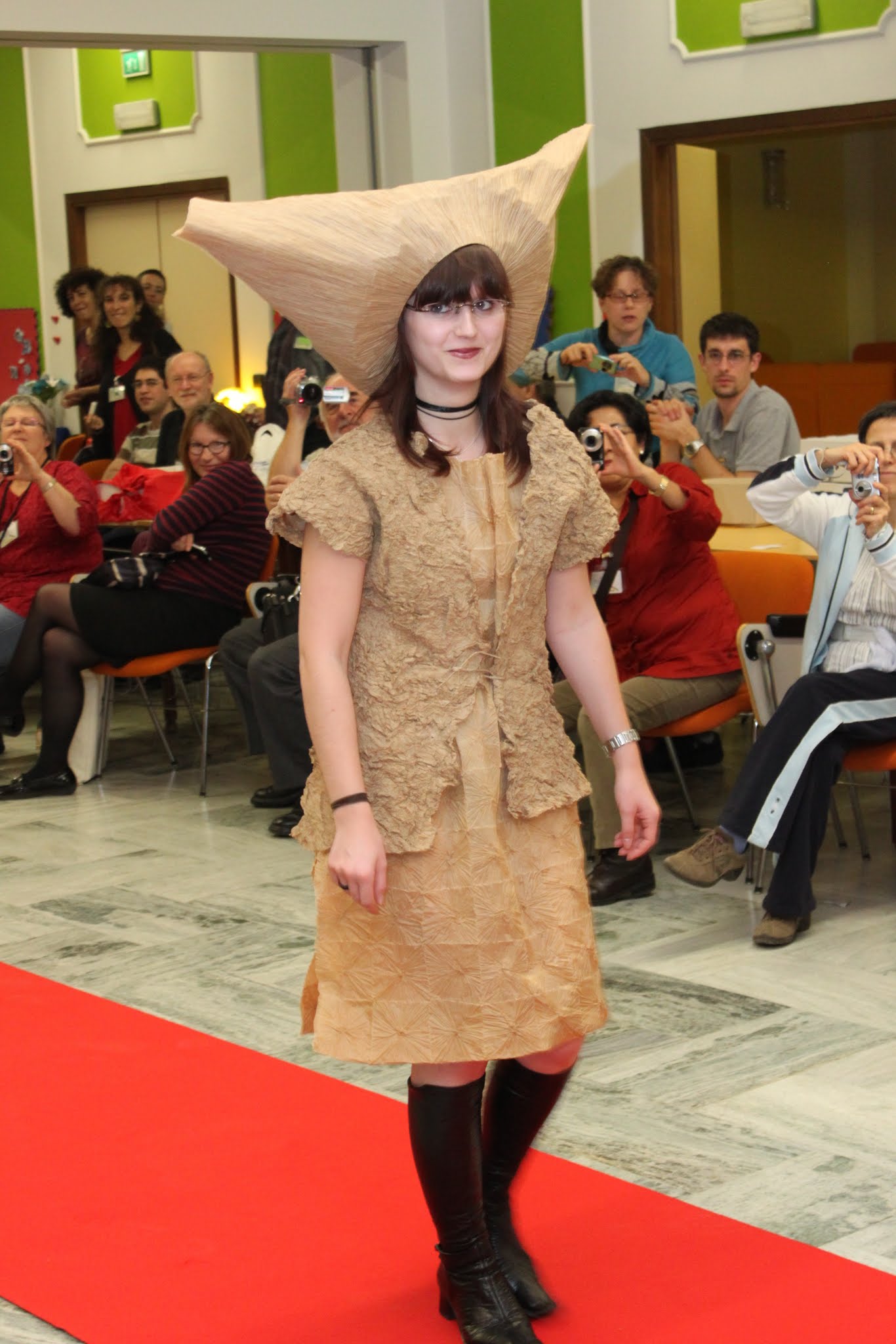 From left to right: Paul Hassenforder during a class; Donatella Ghisi, Italy, presenting "Terassine" in the fashion show “A Dress for Annette”; Anja Markiewicz, Germany, with a fancy hat and elegant dress, all models by Annette and Paul Hassenforder (Photos by Gerwin Sturm, Austria) 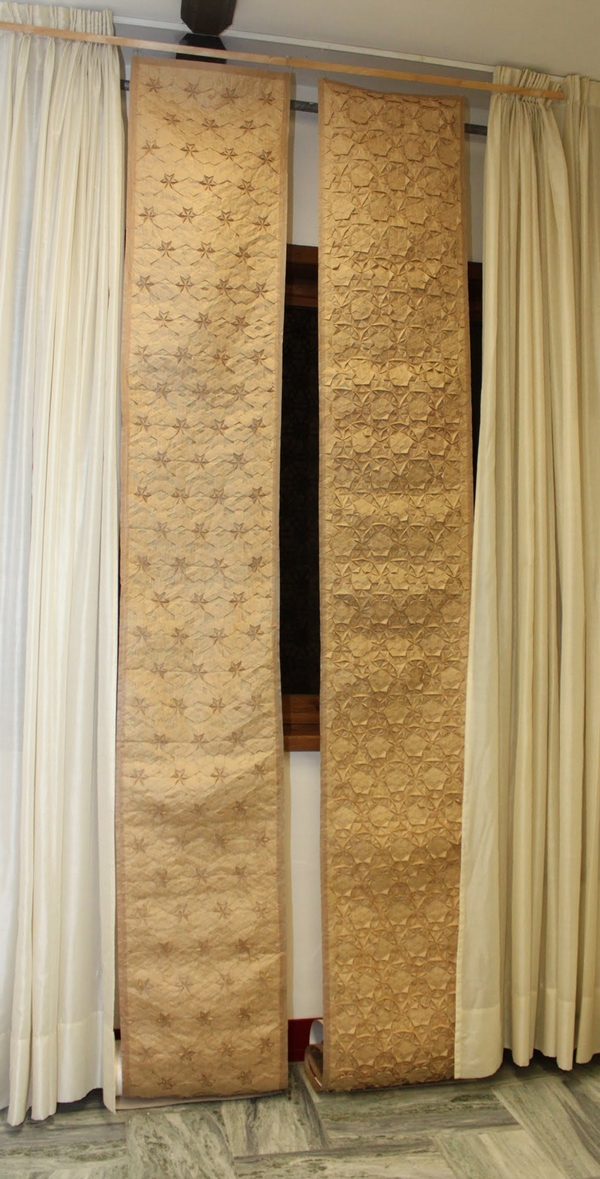 Amazing, over the top, tessellations by Paul Hassenforder (Photo by Gerwin Sturm, Austria)

Large format is an understatement. His tessellations, presented hanging from ceiling to floor, were made from a huge format, 8X1 meters. Just imagine folding the grid with an eight meter long rectangle! 1500 meters of crease lines have become a beautiful and staggering model. Now this is what I call Over the Top!

Best in the world 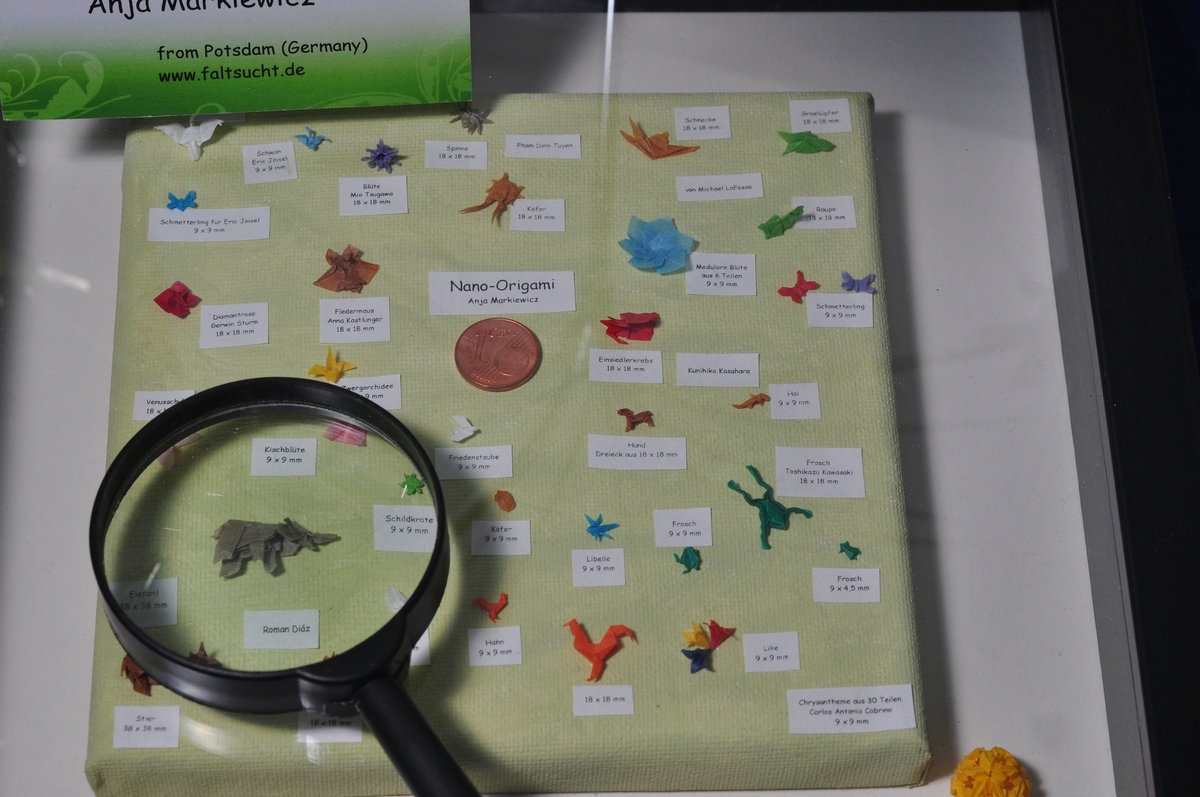 Herman Mariano, an Israeli folder and a colleague, maybe one of the best figurative folders in the world, was a little disappointed to see that most of the models in the exhibition were either modular or tessellations. It’s true; in Italy they just love modulars and geometric models. And so do I, which made me extremely happy. I was even happier to meet the best Micro folder, Anja Markiewicz from Germany. Actually she is more into Nano Origami now. Just imagine; all her exhibition fits in a shoe box. For babies. Small ones.

I also met the best Video Tutorials maker, Sara Adams, from Germany, too; the happiest tessellator, Christiane Bettens, from Switzerland, and the queen of stars, Carmen Sprung. Of course there were also some local talents, such as Nicoletta Maggino, Francesco Mancini, Pietro Macchi and many, many more.

The Italian convention is full with talent. You can see it in the models for the A4 contest, in the fashion show and all over the tables. With such high level, it is great to teach, and I enjoyed very much with all my six classes I gave. It’s not easy to teach tessellation but here it went perfectly.

Perfection is in the details

On the second day there was a big table on a sketch board with three columns. The first two are for the asking: “my name”; “a model I want to learn how to fold” and the last is for those who can, “I can teach it”. What a perfect idea!

A big box is given to all participants, labeled with your name, to hold all your models. Moreover, a folding board was given, too: a white board with a limit at the edge to allow for both Book fold and a diagonal fold. 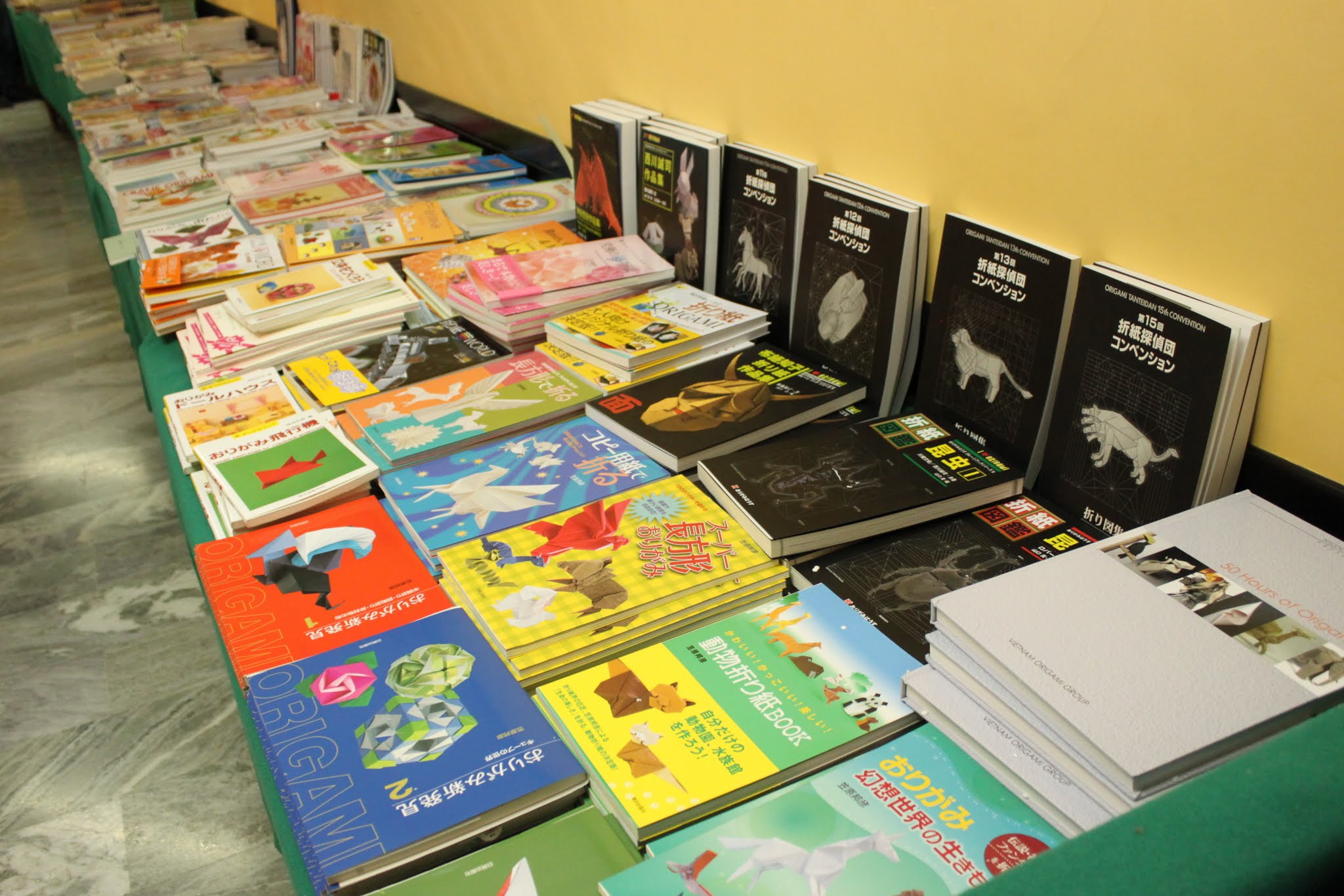 The books side of the astounding CDO shop (Photo by Gerwin Sturm, Austria)

The book and paper shop. This is indescribable. No, really. I will not even try. You will have to see it to understand.

Did I mention this magic bowl on the table, always full with Parmesan, never empty?

Energy potion is mixed in the pasta, during lunch and dinner, so one can last awake longer, into the small hours of the night. 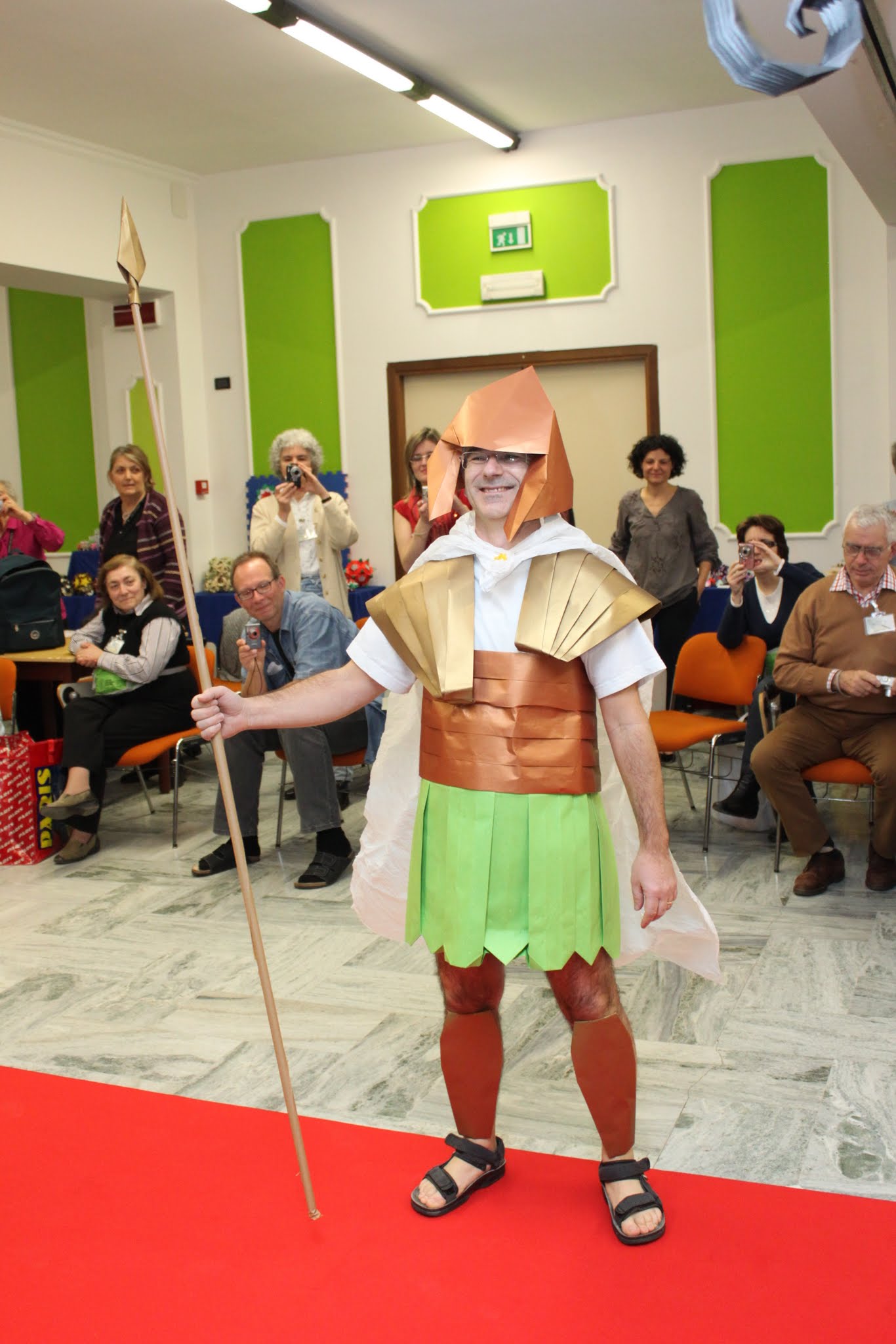 On the last dinner we got a double dose of this potion, so we could stay awake even longer. It wasn’t until some of the participants in the “fold a crane with your eyes closed” contest didn’t care to open them, that we realized it is time to go to sleep. I won this competition and challenge you all to come next year and try to take the crown away! With the all the benefits of the Italian cuisine, the smartly chosen special guests, the hyper talents local folders, and their fearless leader, Roberto Gretter, satisfaction is guaranteed!