We have a Winner! 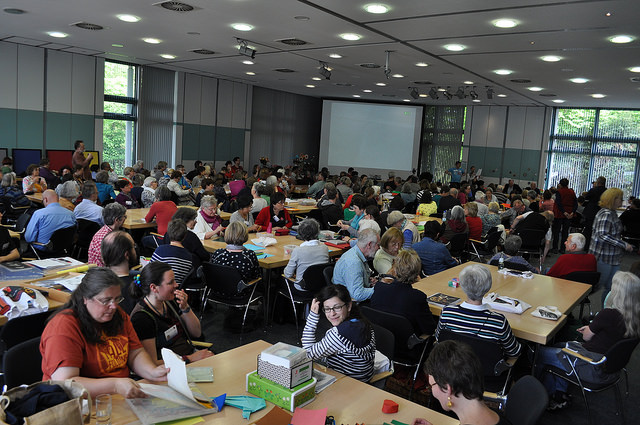 Our story started a few months ago. Ever since the legendary FIFA World Cup semi-final match in 2010 between Germany and Spain, where Spain won 1-0, there has not been another large battle as the one between the Origami Deutschland (OD) group and the Spanish group. As it happened, both annual conventions were scheduled for the same dates. To enhance the tension, one was planned to take place just in Barcelona, the other in Bonn, not far from Koln; both locations, without any doubt, are high on the list of beautiful cities.


For some time the origami community was torn between the two choices. Many friends decided to go to Barcelona, but I decided to stick to my original plans, continuing my quest to participate in all origami conventions around the world. Having already attended the Spanish one, it was time to falten some papers.


I must admit, traveling alone for the first time in Germany caused me great trepidation. I have no knowledge of the German language, and the train passes the stations before one can read the station's name on the sign. But Arno Pfingstner put all my worries to rest. He sent me all the time tables for the trains I needed. And, thanks to German efficiency, my luggage was brought from the airport to the train station, which was a mere five minute walk from the arrival hall.


Germany is a big country, and the origami community is spread across the nation. Every year the convention is located in a different city. This year it was Bonn. The venue was a conference center, GSI, which has rooms and all the needed facilities to host a convention of 250 folders: 60 international guests and 190 locals.


In my first conventions I was blinded by the origami aspect of my trip. I came on the first day of the convention and left immediately after it ended. I didn’t set foot out of the hotel and folding hall. After more than ten conventions, I now know better. I arrive a day before and stay one day longer. Being early, I have all the time to travel at leisure, not rushing anywhere, to meet the other early birds, get acquainted with the area, find the restaurants we may need to use, if the hotel food is not up to par. Staying the extra night is even more beneficial, as I don’t have to suffer as much as all the guests who must pack their exhibition while the paper is still hot in their hands. This also allows me to sit and enjoy a quiet evening with the organizers and those who share my philosophy. The last day is dedicated to sightseeing, as I try to enhance my memories form this convention with non-origami issues. 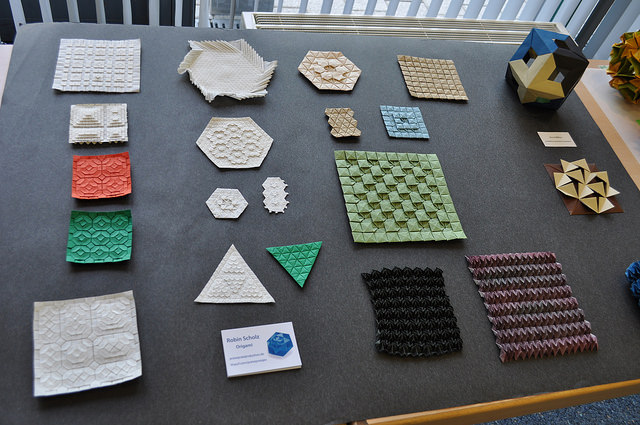 
The opening ceremony lasted more than an hour, with greetings, some statistics, presentation of the three guests of honor – Paul Jackson, Hans-Werner Guth and Mark Bolitho – explanations about the time table and a group folding with Mark.

The organization was tip top. The first day, Friday, is only for free folding, letting people enjoy the time together, hugging and kissing old friends, talking, and drinking some beer. Workshops started on Saturday morning, with a huge table presenting all locations and classes, with the model to be taught attached to it. Most of the classes started on time and were conducted in separate rooms, in a quiet environment. Three of the workshops were conducted in the main hall.


As always, exhibition tables were placed along the walls and slowly filled with models. With a community of around 800 folders, 190 of them attending, there were some beautiful tables, especially the contest one. For the first time, the OD conducted a contest, with the theme of Wedding.


Another initiative I have never seen before, was the convention book table – each who contributed a model for the convention book also sent Robin Scholz the folded model as well, or brought it with him/her as I did. For those who couldn’t come or send it, a group of folders sat on Friday morning to complete the task. It is a great way to show what is included in the book. 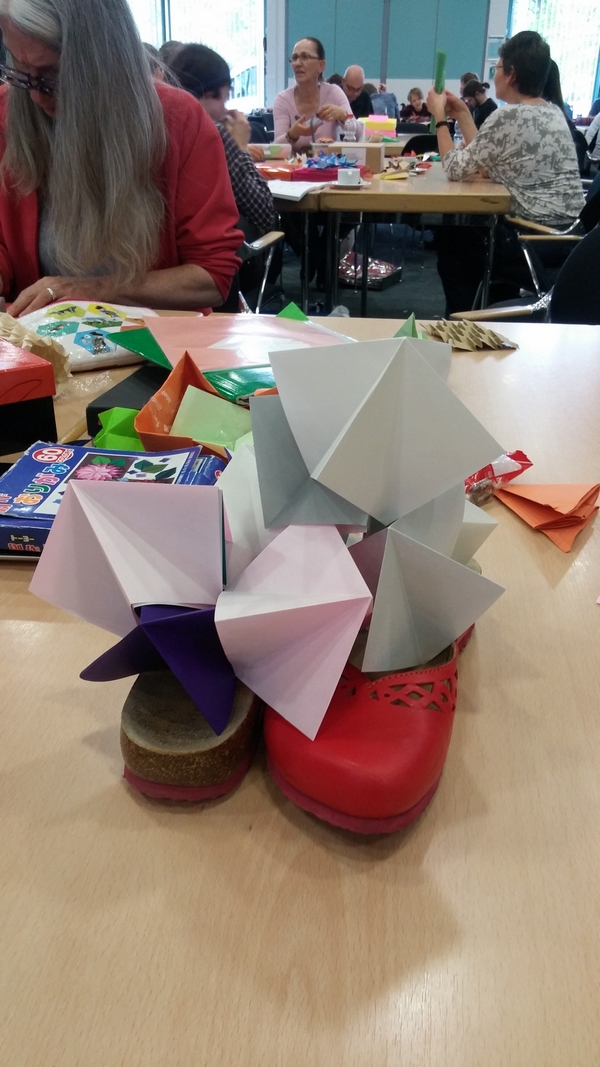 A new origami game in development. Yes, it is a shoe.

For me, two major factors for evaluating a convention are the number of new models I learn, and what happens during the night folding. Here is my only criticism of the convention: I learned too few models; my box was not as full as usual. Although OD has 800 members, I guess there are not enough original creators among them, or maybe, they are still too shy to teach, as I have seen quite a lot of interesting and promising models on the exhibition tables. A lot of the models I could choose on the schedule board were either familiar to me, or not my cup of tea. I guess the more conventions you attend, the more difficult it is to find new, unknown, models. 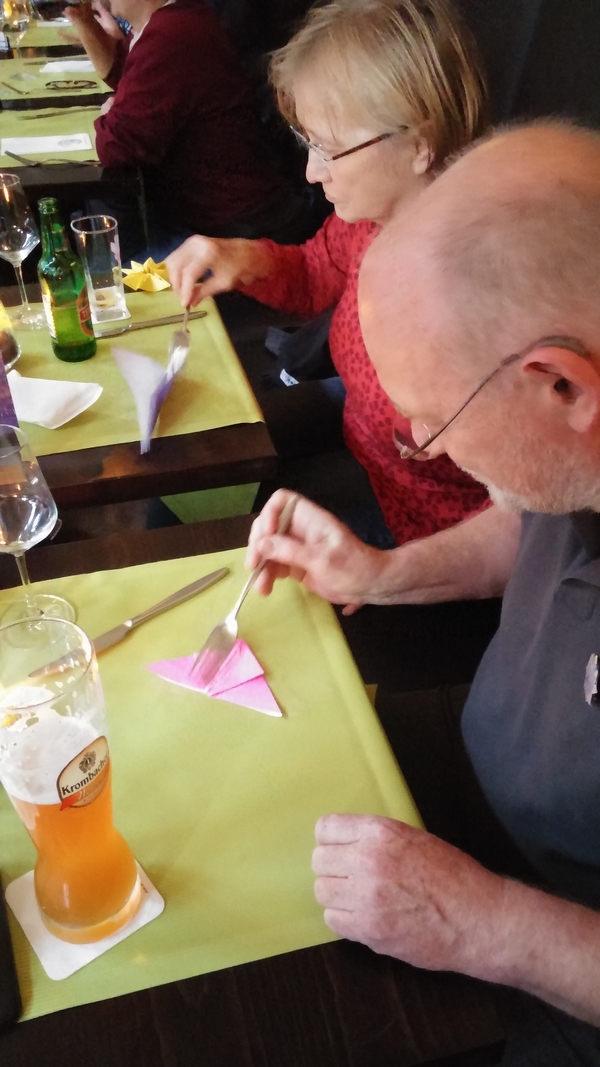 Hans-Werner Guth,Yoshizawa butterfly,
folding single handed with a fork and help from some beer!

On the other hand, the night activities were truly fun. I just published an article about origami games, so we tried our hands with many of them – chopstick folding (we only tried to fold the preliminary base, which proved to be a challenging task); single handed folding; Fork Only folding (where Hans-Werner Guth amazed us all by folding Yoshizawa butterfly single handedly, using a fork!) I mostly enjoyed the company of Martin Rohrmann, while we sat and realized we have not enough origami games you can play in a group, without any preliminary preparations. Setting our minds on this target, we managed to invent a game that includes many preliminary bases, one flat sheet of 15 cm Kami, and a lot of concentration and balance. This game, and some more, that were provided by other members of the Night Folding Group will help me to publish, soon, the Incomplete Guide to Origami Games – the Sequel.

Is it over already?


An Israeli, American, and three Italians may sound like the beginning of a joke, but it is actually the beginning of our last day in Germany. On the way home we stopped in Koln. This beautiful city and beautiful weather made this day the perfect ending to a great convention. As always, it was all about the people you meet, after a long period of longing, and it was great to feel a part of the international origami community!