Remember the article Creating via Blintzing, which used the Spanish Box as an example? In 2021, I gave a talk on that topic and suggested people try it themselves. Govind did exactly that and came up with this beautiful box, which looks great and has some interesting folding sequences.

Govind asked if I could make a diagram, and he provided a nice video illustrating the folding to guide me. I happily accepted, and the result is the diagram of the Aadya Star Box by Govind Kulkarni available through the link in the caption above.

The diagramming posed some interesting challenges. Diagramming is a different discipline from folding. You want to consider, among other requirements:

Three issues stood out when I test folded the model. When marking the bottom of the box, the video creases through all layers, ending up with an extra crease on the top. The model goes 3D pretty early, challenging both understandability and my drawing skills. And finally, the locking flap tends to unfold.

The first two points can be resolved by changing the folding sequence — an important consideration when diagramming. Every model can be realized through many different folding sequences, and which is better comes down to purpose: folding it for yourself; folding quickly, cleanly or accurately; diagramming; videoing; or teaching one-on-one or in a classroom.

The diagram above gets rid of extra crease by utilizing a careful folding sequence, apparently without sacrificing the other issues.

Pursuing the 3D-issue, I found another folding sequence; see the link in the caption at the end of this article. It introduces another crease line, this time emphasizing the star shape but also leaving the surface less clean.

Interestingly, while the first diagram uses a blintz and closely resembles the Spanish Box (see PDF diagrams), the second diagram has no blintz, and essentially goes through the traditional turtle base. See step 6 of the Turtle PDF.

As for the small locking tab of step 12 of the original Aadya Star Box, above (or step 7 of the box diagram below):

The Aadya star boxes of the two photos, made from 120 gsm copper pearlescent paper, do the first three things, and they hold together well, even after a long time in existence.

Enjoy, and best greetings from Govind. 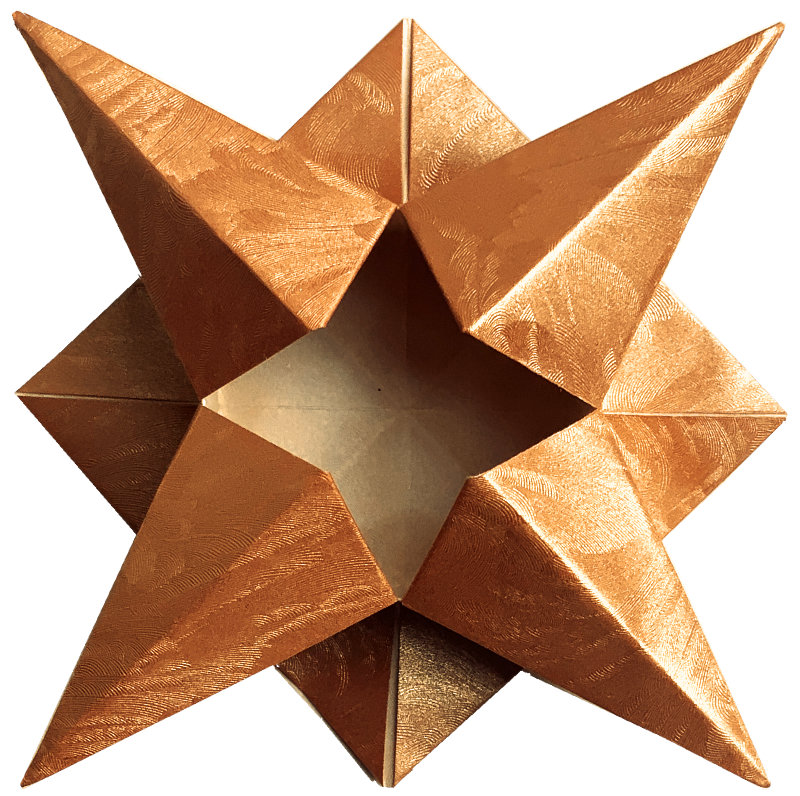 Editor’s Note: It was brought to our attention, a few days after publication, that an almost identical box was designed by Francesco Guarnieri in 2007. Govind’s box has fewer creases, a flat top and a distinct folding sequence. The variation by Hans is basically identical to Francesco’s design.

This box looks a lot like the one I designed in 2007:
https://guarnieri-origami.blogspot.com/2013/01/scatola-stella.html
Published on the website of the Italian origami association, CDO:
https://www.origami-cdo.it/modelli/pdf/myScatolaastella.pdf
Published in 2010 by Nick Robinson in the book: World’s Best Origami, page 168.
https://www.giladorigami.com/BO_Worlds_Best_Origami.html
Francesco Guarnieri

Francesco is correct that his box from 2007 has the same bones as the one by Govind Kulkarni. There are only a few small differences. Govind's has fewer creases (the top is flat, and there are only two lines crossing at the bottom center), and it has a different folding sequence and a slightly different crease pattern. The alternate version by Hans is identical to Francesco's. This is a case of more than one person independently discovering the same model. My apologies for not catching this and making note of it in the article.

Thanks for the reference

Hello Francesco, Jane kindle wrote me about your comment (I don't know how to subscribe to get notified about comments on my own articles).
Thanks for telling us this. You are right, Govind's, and in particular my variation's, box expression are close to your model and should be seen as small variations of that.

Govind's is the cleanest, and yours has the most facets.

Govind's folding sequence is very different' based as it is on the Spanish box.
I find it very interesting to compare your sequence and mine which both go via the turtle base.
I first wondered why you put in the 3/4 diagonals, but the folding reveals that they create a triangular facet on each side where Govind's model as well as my variation have curved, uncreased sides.

Another difference is that your model have valleys on the corner top sides, where my variation has mountains, and Govind's has none.

As for Nick Robinson's book, it is unfortunately not one of the 8+ books of his on my shelf. Not that this would have guaranteed I would have recognised your model.

I will certainly add a reference to your prior model in the diagram.

Hello Hans,
Thanks for the quick reply.
I fully agree with his analysis and the statement that the Govind box and his are to be considered small variations of mine.
Thank you for your attention and for the reference that will indicate my diagram as the previous one.
Best regards,
Francesco Guarnieri