The literature is abundant with outer and inner blintzed bases. In the article “The Dragon and the Might of the Blintz,” we saw some of what the blintz can do for us.

We shall see how the Spanish Box1 and more can be constructed from a plain square by applying outer blintzes. The short version of this article is in Figure 1; more details and beautiful variations follow. 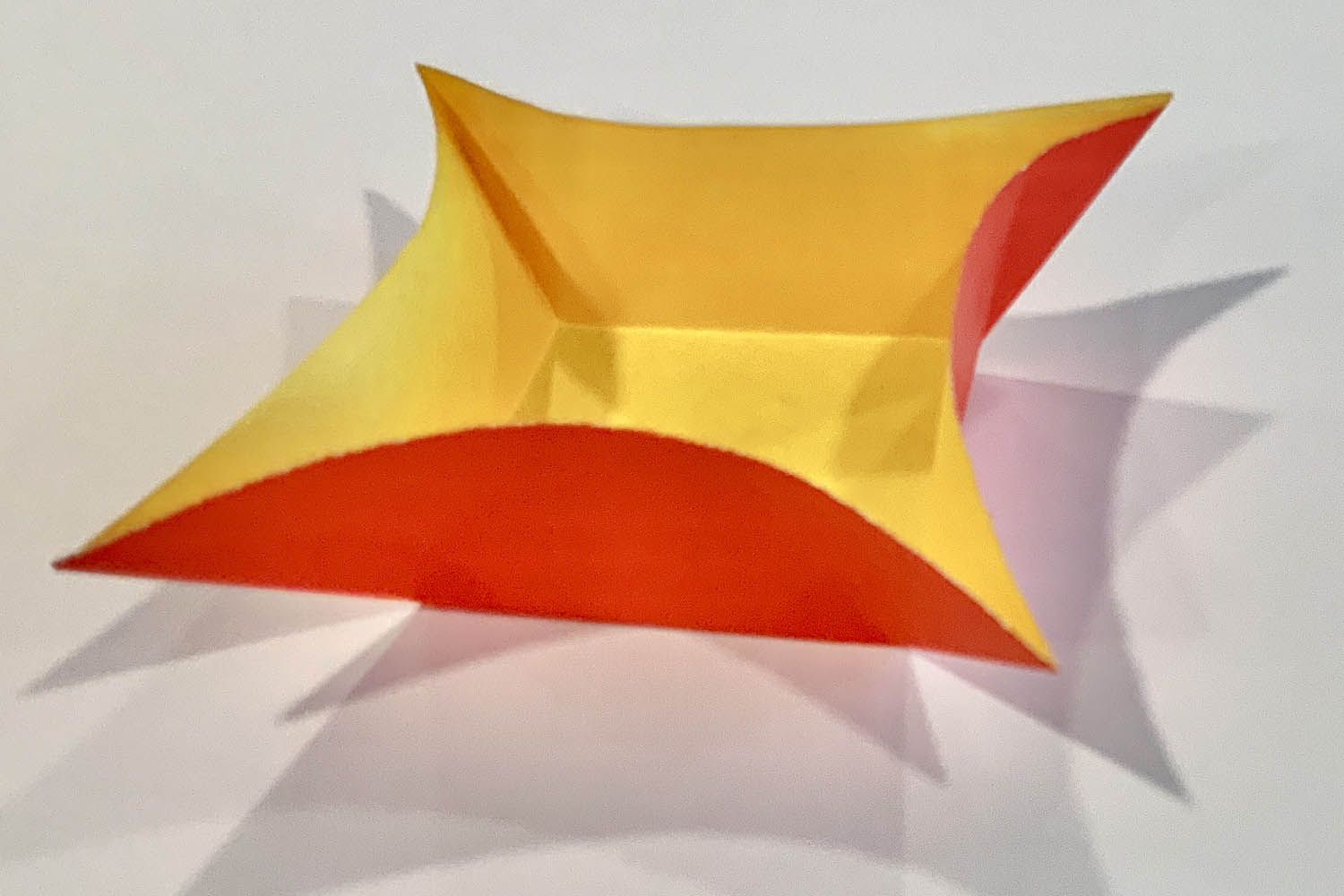 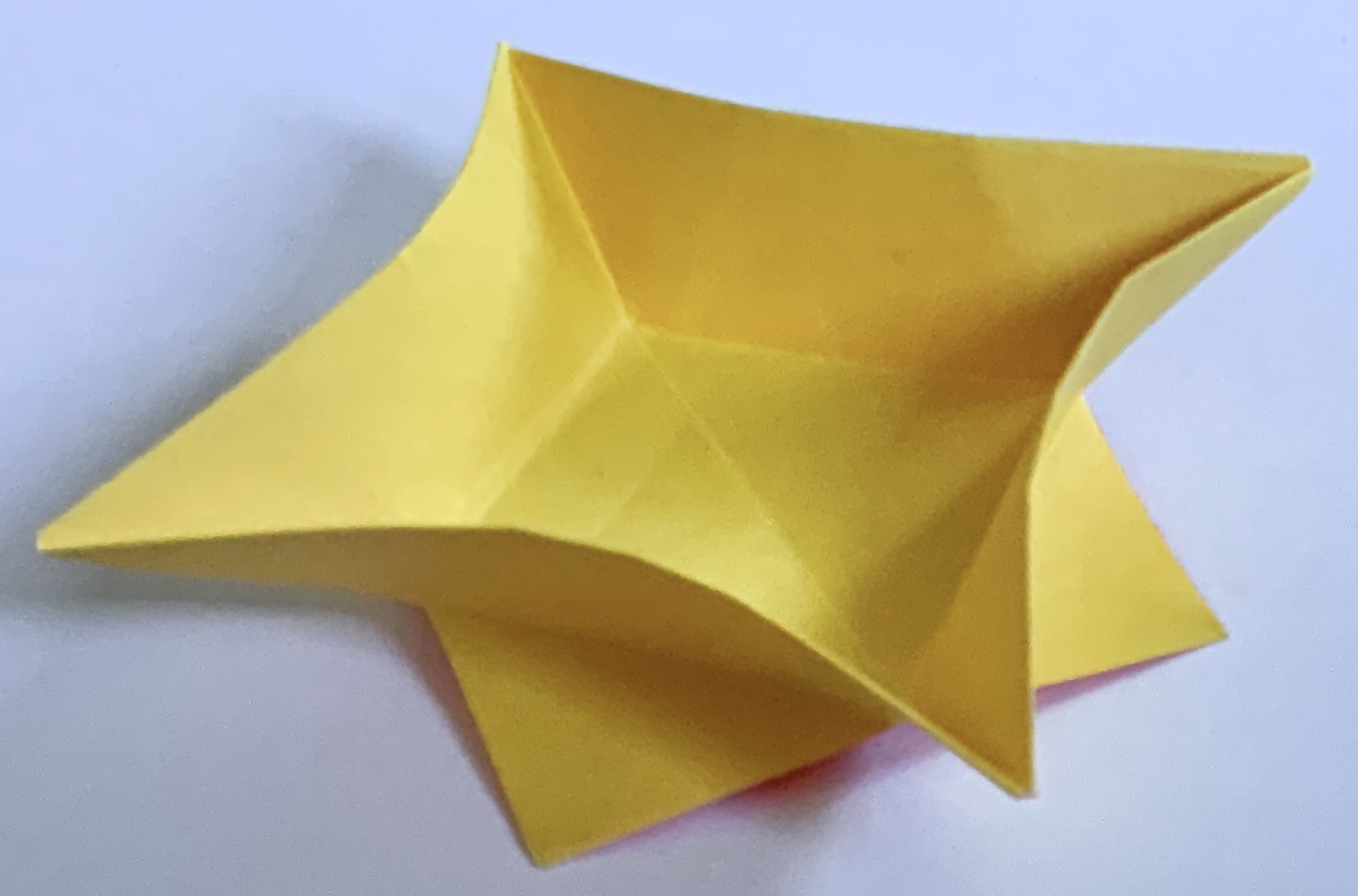 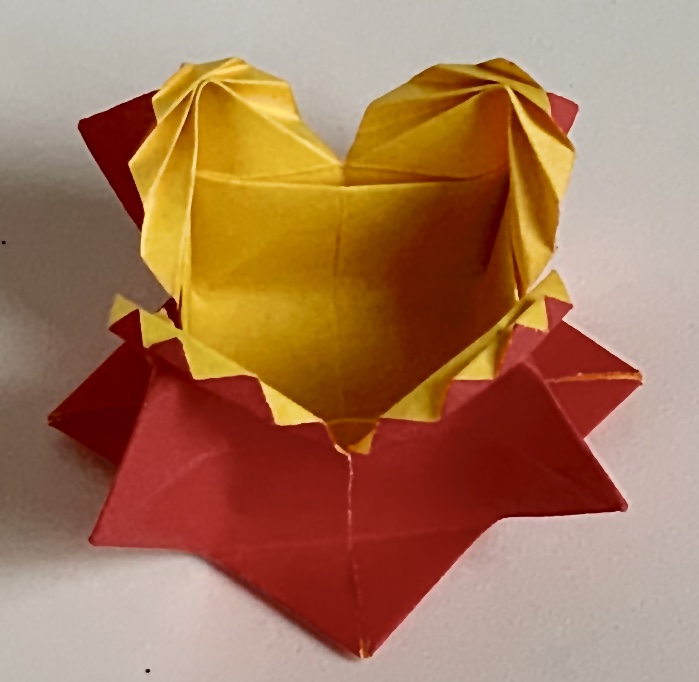 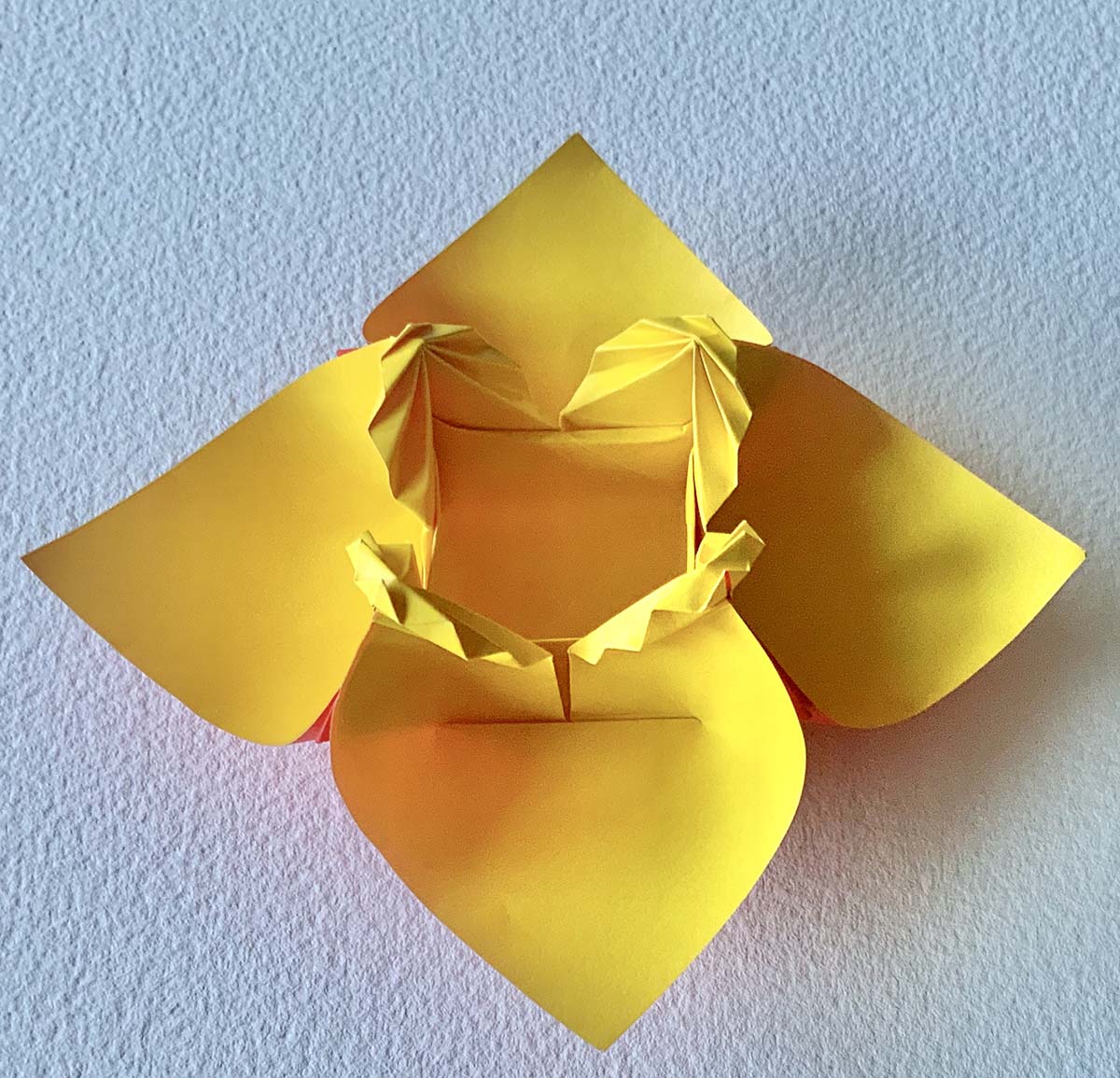 Simple Box From a Zero Base

Consider how minimalistic bases and blintzes would look. The simplest starting point is the square itself. Call that the zero base (Figure 2). Let us fold an extremely simple box from that base (Figures 3 and 4). It has no locks and is held in place due only to the inner tension of the paper itself.

Assuming the back side is up, Figure 5 depicts an outer blintz.2 In Figure 6, the simple box pattern (from Figure 3) is embedded at the center. Note how the crease lines of the simple box overlapping the blintz are replicated onto the blintz flaps in reverse: The valley folds become mountain folds. 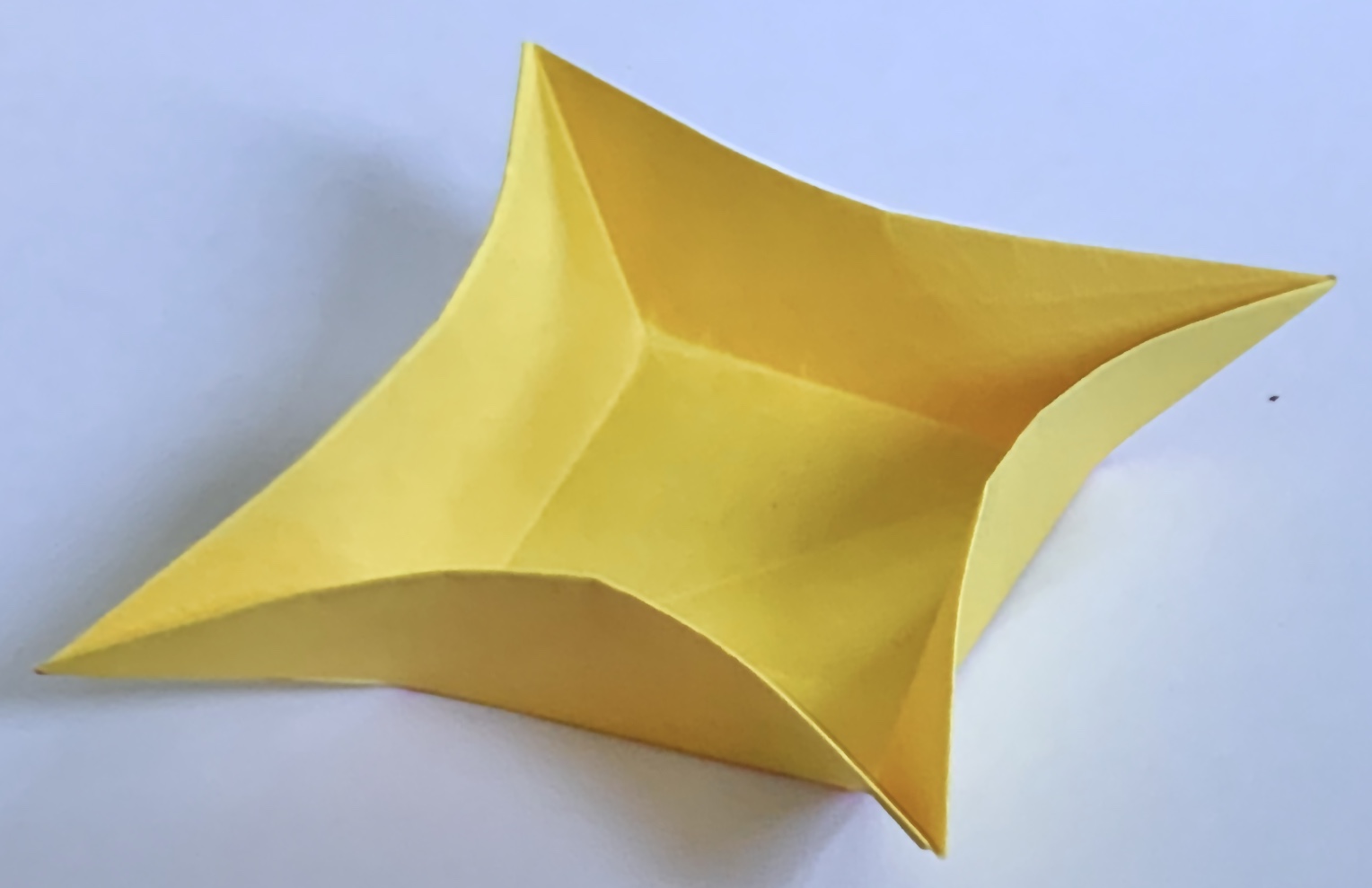 The resulting simple box (Figure 7) looks like the original, only with the same color on the inside and the outside, which is what the outside blintz does. It is also half as large from the same size of paper. Now that’s not exciting at all.

The underside of the box reveals where the flaps hide (Figure 8). We can use those to make the model more interesting by pulling them out and doing something with them. One option is to reverse fold the outermost crease line. The result is a simple box with feet (Figure 10). Compare the crease patterns of Figures 6 and 9. 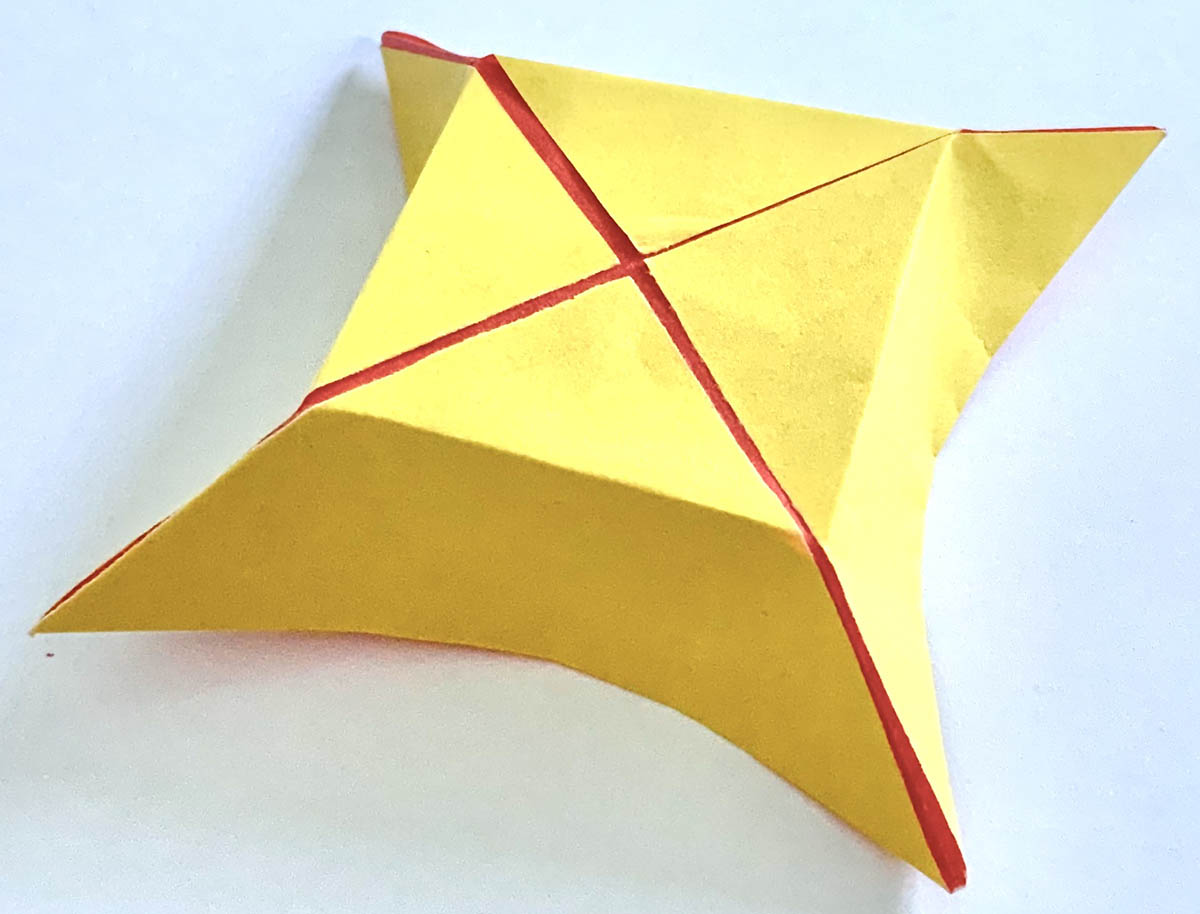 Another option is to pull the flaps all the way out (Figures 11 and 12). The gray lines in the crease pattern are unused creases. The folded piece of Figure 12 is a “clean” version, where these creases were not made at all, which results in a crisp, clean model with tension-curved flaps.

Figure 13 shows the crease pattern for the simple box with an inner blintz. Except for the direction of the blintz crease itself, it is exactly the same as the crease pattern for the outer-blintz simple box; compare to Figure 6. The fully pulled out version is the same as that of the outer blintz, which is a direct consequence of the construction, and the intermediate forms are not interesting for this model. 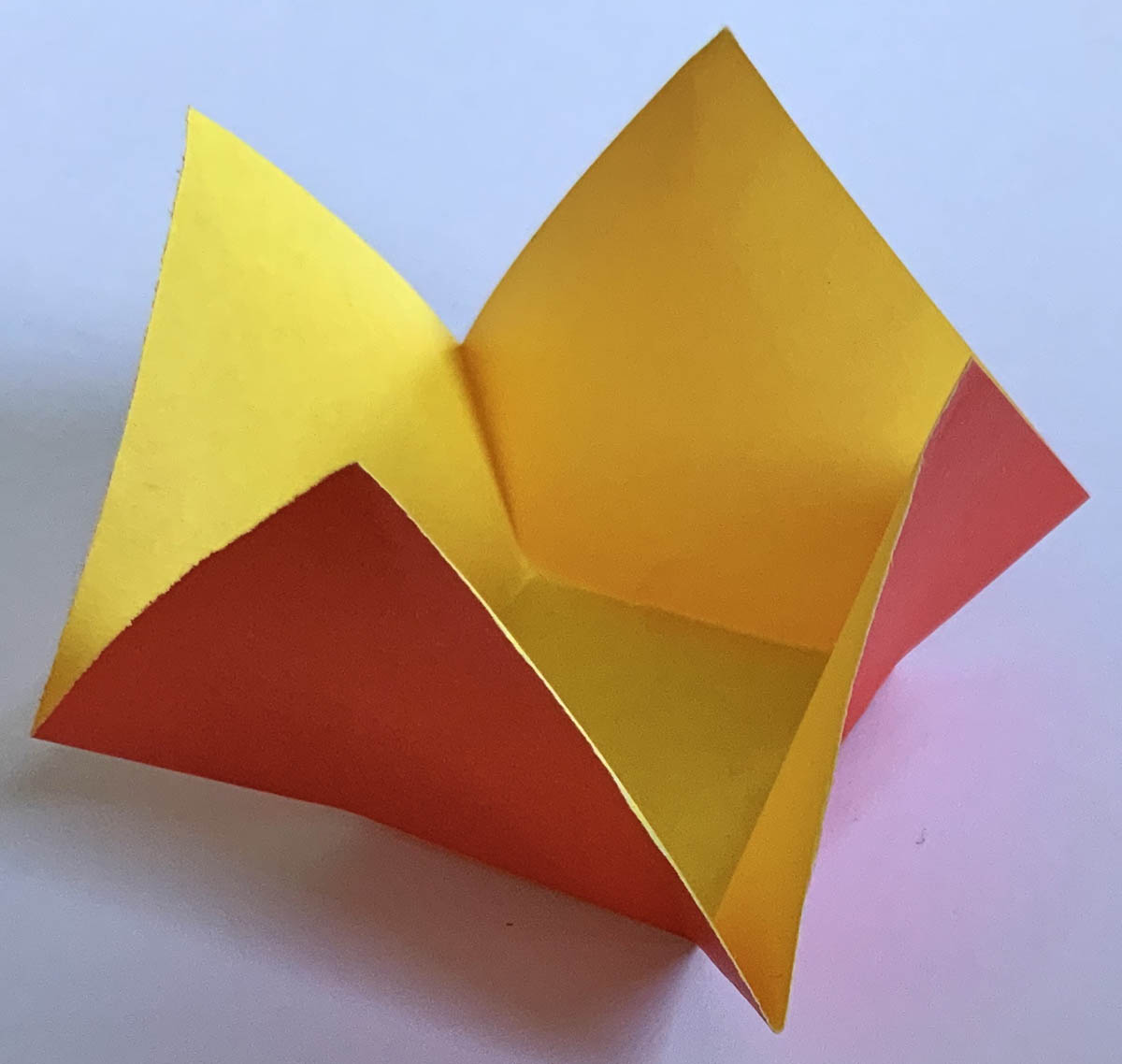 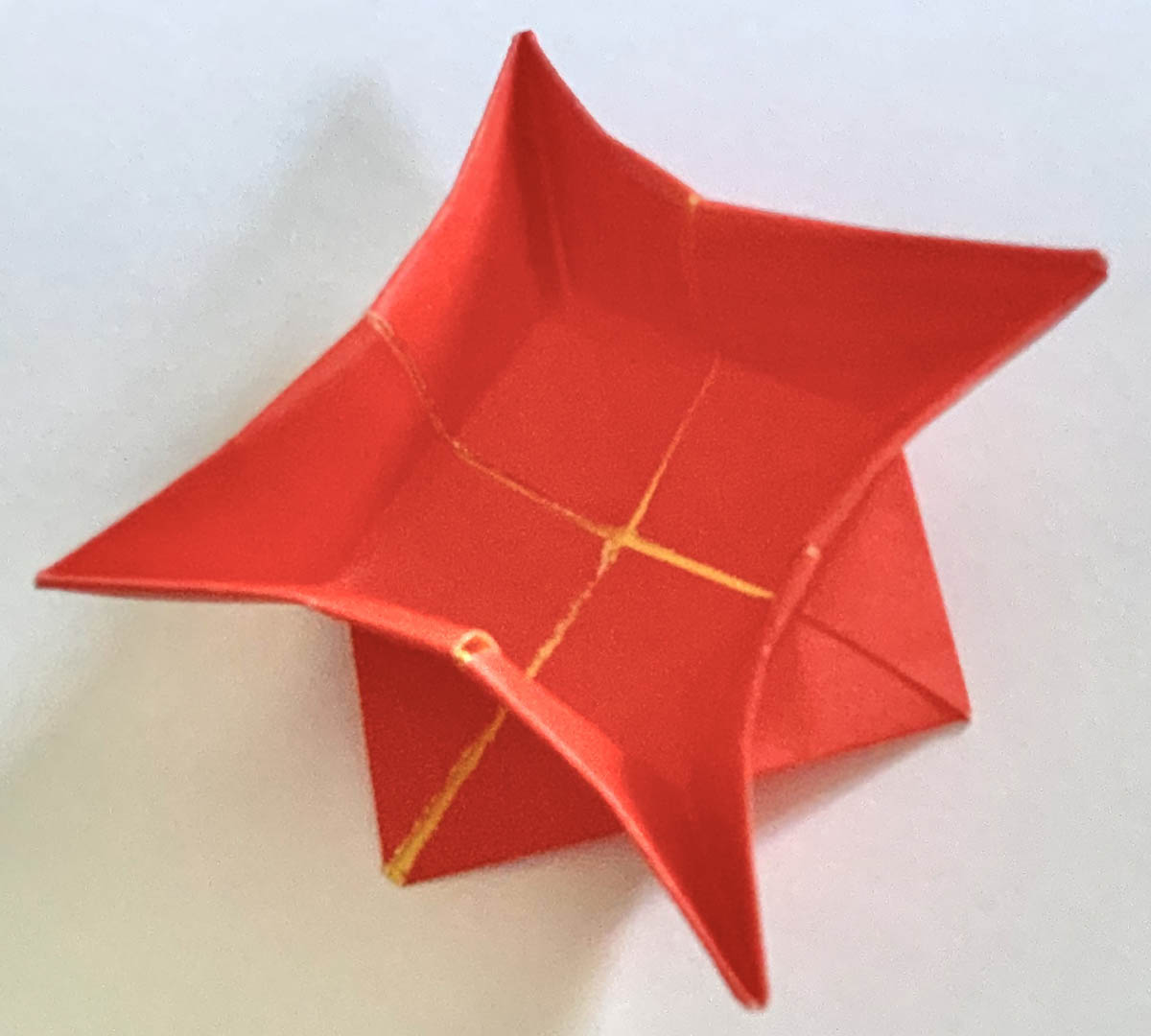 Try to pull out the flaps from the inside of the model. The crease pattern and the clean result (avoiding unused crease lines) are given in Figures 17 and 18. 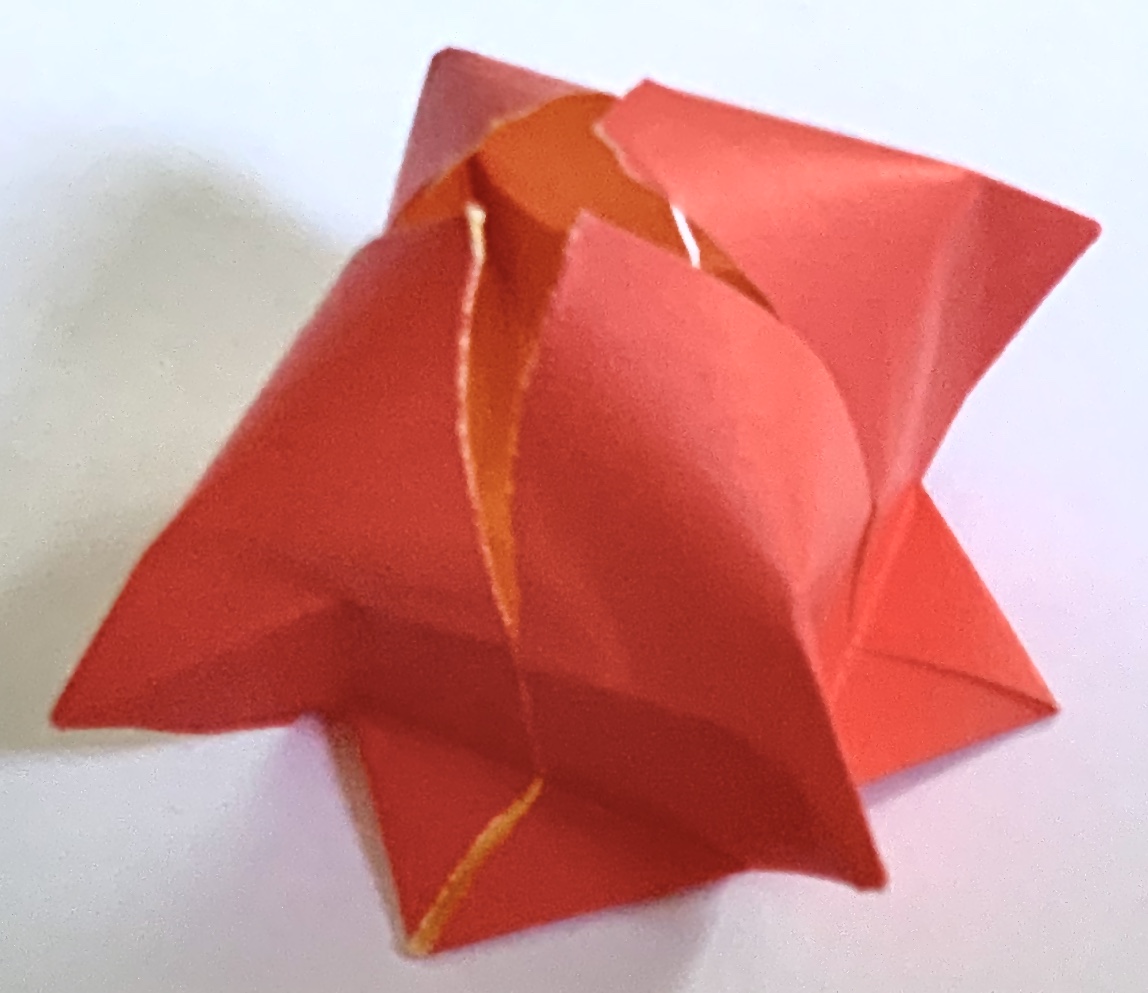 If we pleat fold the pulled out flaps, we get the Spanish Box.

We might try to inner blintz the simple box with feet, Figure 21. It is difficult to see any interesting way to utilize the inner blintz flaps, Figure 22. We might pull out the flaps fully, which in the end is just the same as the outer blintz pulled out (Figures 17 and 18), only with a less convenient folding sequence. 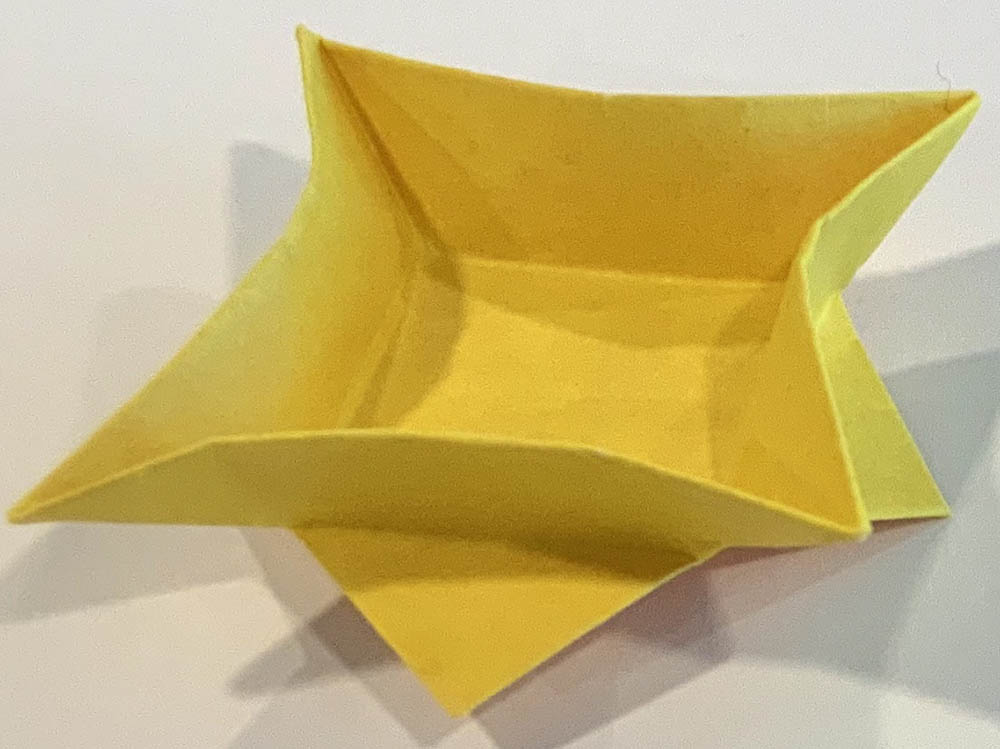 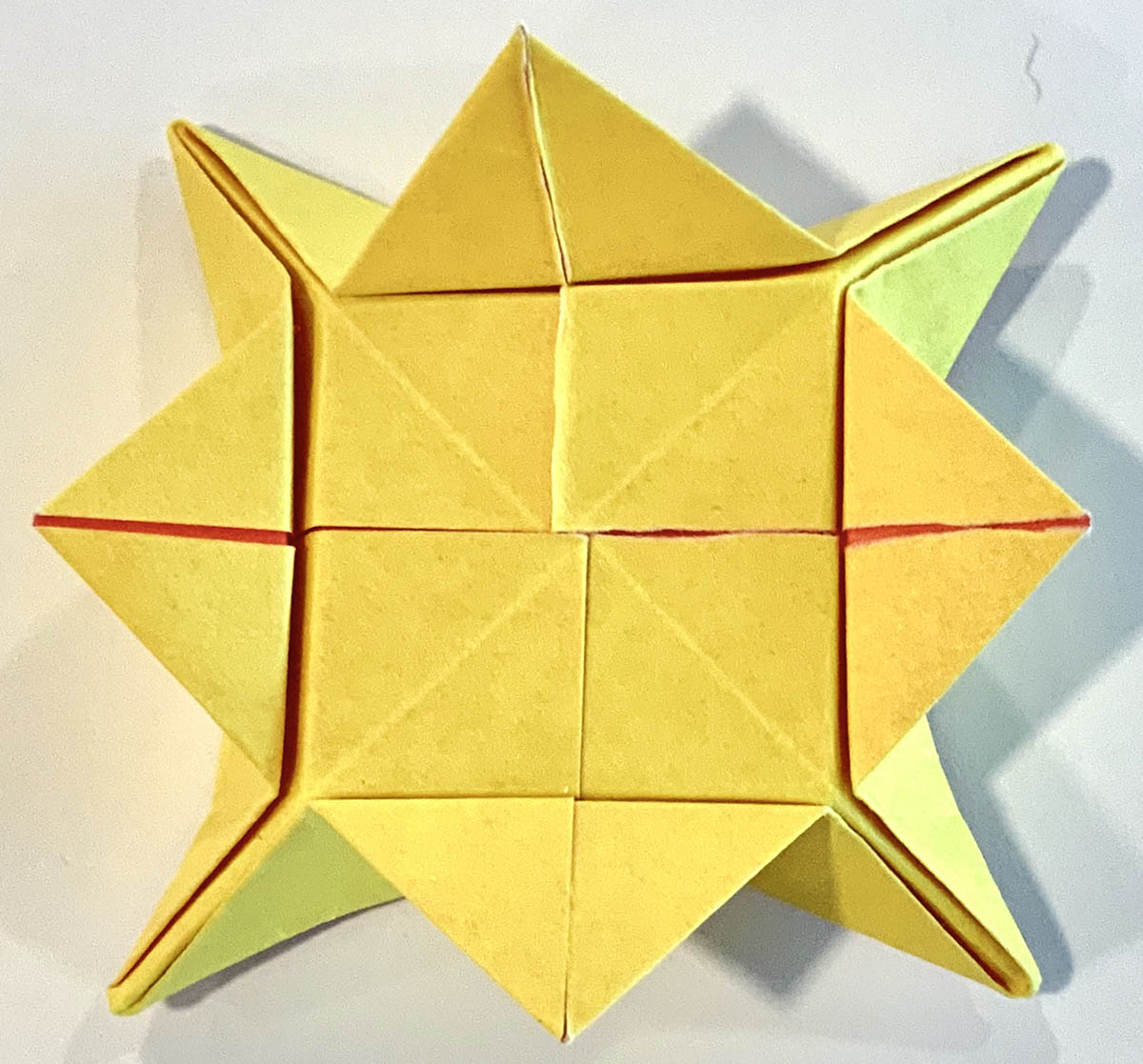 Going on to the third blintz level, we get yet another set of flaps. The triple outer blintz base (Figure 23) applied to the simple box ends up being a nice flower if we pull out the flaps and make the clean version (avoiding the unused creases), Figures 24 and 25. See PDF diagrams for the Box with Petals, Figure 25. The diagrams are for a variation where the feet of the box are above the petals (as in Figure 28) rather than underneath them.3 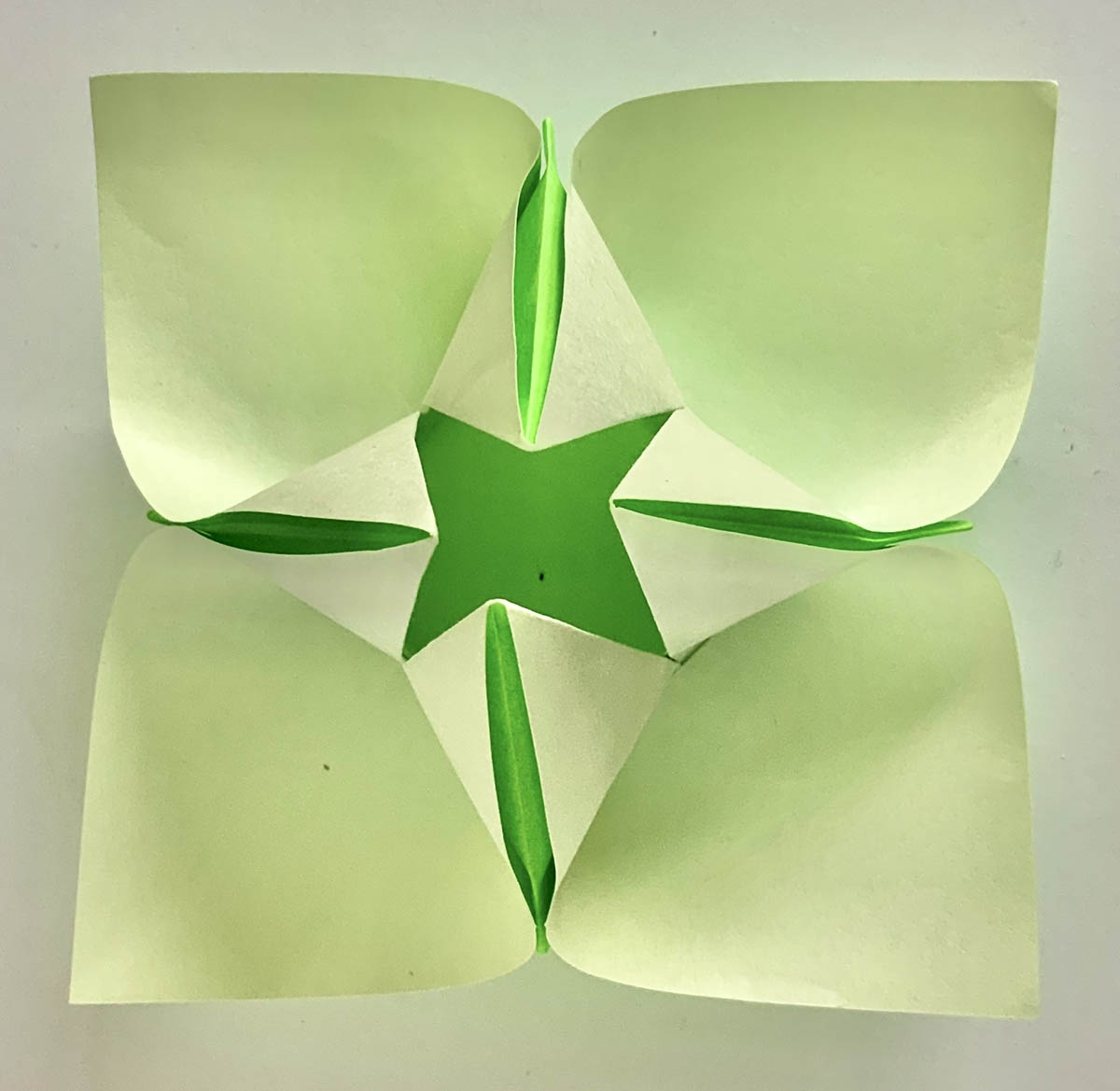 We might also pleat the second set of blintz flaps, in the way we did the outer corners in the Spanish Box (Figures 19 and 20), and pull out the flaps The clean version is shown in Figures 26 and 27.

We can continue. Doing a fourth blintz provides us with an extra set of flaps on the inside, which may be folded as shown in Figure 28. The second set of blintz flaps are folded in the style of the Spanish Box. As an extra variation, the feet of the Spanish Box are put on the inside of the outer petal flaps; compare this to Figure 27, where the feet are on the underside of the petal flaps.

At each step we may choose to inner or outer blintz, providing for exponentially many variations. Figures 29 and 30 show the inner blintzed Spanish Box, which is slightly interesting, with the inner flaps mirroring the feet of the Spanish Box. 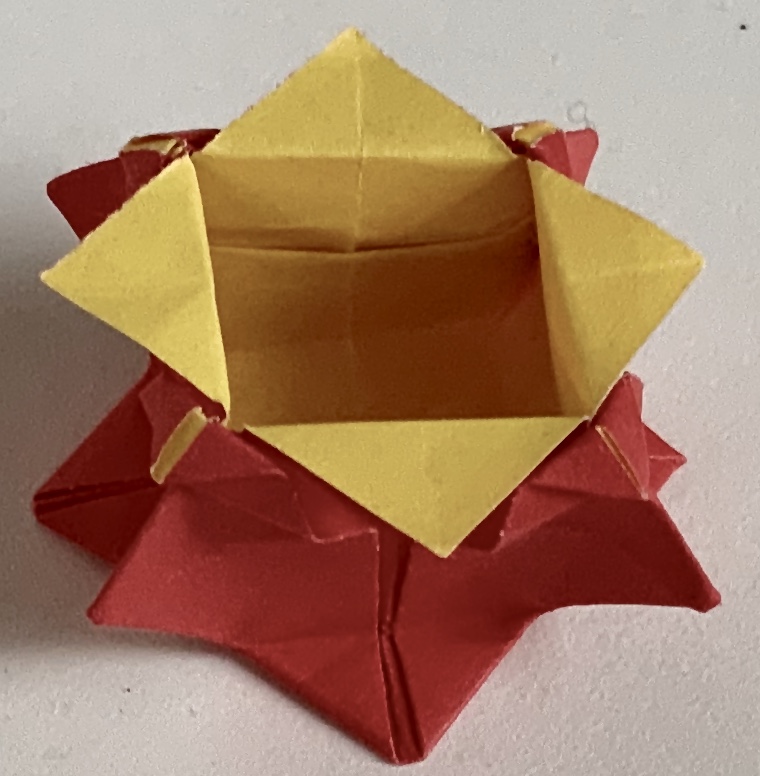 That the options are endless does not imply an equally endless cavalcade of good designs. Already in the examples above it is clear that some options are more suitable or beautiful than others. For the simple and the Spanish boxes, the outer blintzes seem more viable. The lotus flower, with its series of inner blintzes, provides very nice designs as well.

Find a good design based on a mixture of inner and outer blintzes. The design may be your own, traditional or somebody else’s. It is your decision what to do with the flaps of each level of blintz.

The designation “good design” is fuzzy. For example, the inner blintzed Spanish Box variation of Figure 30 is not really a good design. Though the feet mirroring aspect is of slight interest, the model isn’t really elegant, and its virtue is mostly in being an example of a mix of inner and outer blintzes (outer-outer-inner, in this case).

Also, what to do with the extra flaps is a matter of judgment and creativity. Compare, for example, Figures 10 and 12 above. The version with feet (Figure 10) is of interest mostly because it is on the path to the Spanish Box, whereas the fully pulled out version (Figure 12) is a study of simplicity and elegance.

3. The diagram shows a variation where the foot is on the inside of the petal. The two variations are about equally easy/difficult. Having made the inner variation of the diagrams, making the outer variation may look like as if you have to do a sink which is difficult, but that is not the case: Instead you just pull out the flap, open the foot, and reverse to form square base. Then finish by folding the triangle foot 90 degrees outwards on the outside, and open the petal down to the horizontal position. [back]