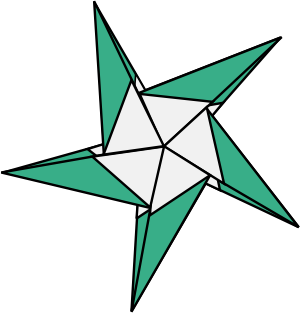 At the 10th Origami Day hosted by Susanne Schmitt and her family I had the pleasure of meeting Klaus-Dieter Ennen once again. He also taught me his newest creation, Star "Hilli". He'd just designed it the day before while waiting for a friend to arrive. As his friend protested that he hadn't been late I will note that Klaus-Dieter likes to be early, and as it goes he experiments with paper in just about any spare minute he has. This at least must be true, as Klaus-Dieter creates new designs constantly.

Klaus-Dieter Ennen is arguably the most productive German origami designer. He started with origami in 1983. Shortly after, he went on to reverse-engineer models from pictures and dove into the world of design in 1992. Since then he's created an extraordinary 2424 models (and counting), which he diligently diagrams.

His creative process is all about doodling with the paper until he sees something appear. Usually that's after five to ten minutes. Thereafter follows the somewhat more time-consuming task of figuring out how he folded his new creation and then capturing it in diagrams. Klaus-Dieter told me that "only" 50 or so of his designs were created with a specific intent. You might say that is many, but I suppose compared to the 2424 models it's really just very few. And I'm sure soon Klaus-Dieter will hit the 2500 mark. After all, he designed 344 models just in 2012, and the year's not over yet. But his star "Hilli" is definitely a model to celebrate the end of the year with!

And if you like this star, you'll probably also enjoy Klaus-Dieter Ennen's book on various stars he designed, or any of his other numerous publications.

Confusing numbers in the diagram

Thanks for this video! The 4x and 5x in the diagram are a bit confusing. I took that to mean this model needed 9 pieces and, I can tell you from experience, fitting 9 pieces together doesn't work no matter how many times I tried :) I just about went crazy.