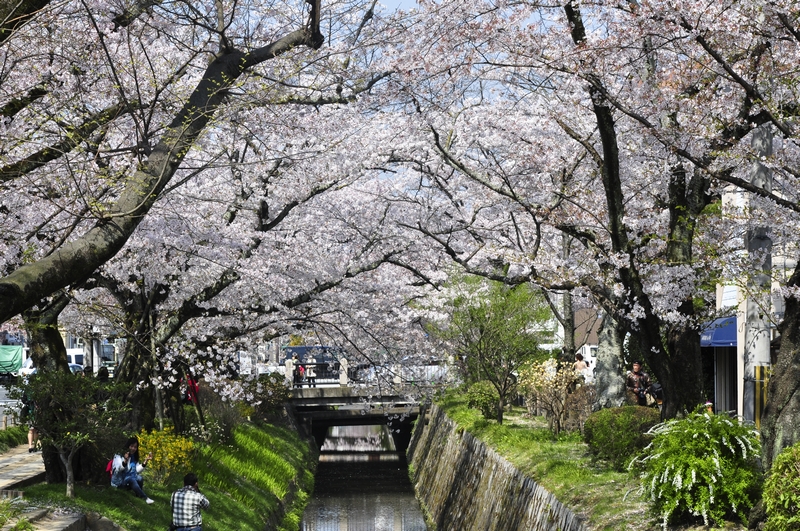 Cherry Blossom in Kyoto. All images courtesy of Ilan and Sigal Garibi. 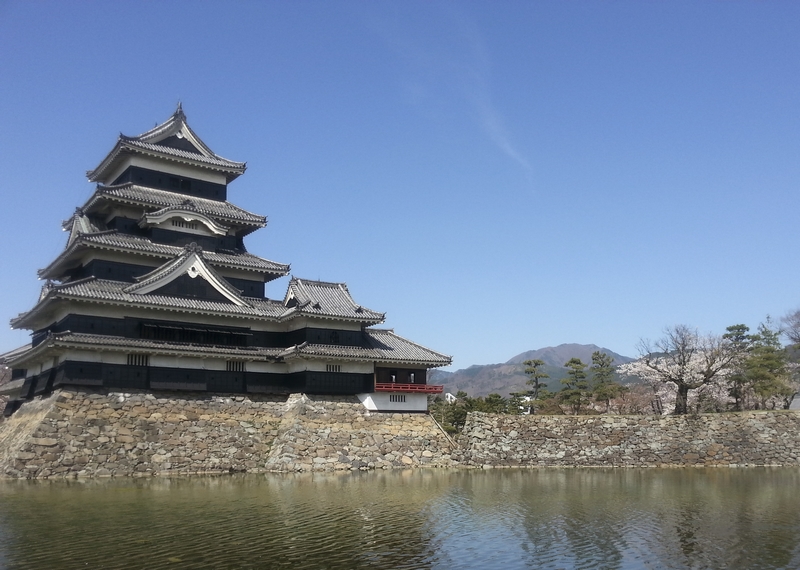 The old castle in Matsumoto

It all started with my wife vetoing my plans. With 6OSME (6th International Meeting of Origami Science, Mathematics and Education) taking place in Japan, combined with attending the Tanteidan Convention high on my To Do list, I announced that this year I was heading east in August. The veto followed five nano seconds later. “There is no way your first trip to Japan will be without me,” she said, not a tremor in her voice, knives shooting from her eyes, and an innocent smile accompanying the message. No one can say it more clearly. This being said, I agreed. And since the best time to sightsee there is in the spring, during the Sakura (cherry blossom) Festival, which coincided with the Israeli academic holidays, it was set. April 2014 it was!

We do not like organized tours with big groups and a set schedule. We prefer to decide for ourselves how much time to spend in each location. We spent four weeks each in the USA and China this way, but we heard Japan is different: No one speaks English, there are only pictograph signs, and if you hit someone accidentally with your backpack, you may be sent to jail for life! To minimize risks, we asked Etti, a tour guide and a specialist in Japan to arrange everything. We gave her the highlights we wanted, and she arranged all hotel reservations and the best route. We asked for Kyoto, Tokyo, Hiroshima, Miyajima, the Monkey Park, the Japanese Alps, and she added Naoshima, Takayma and Koyasan. As I planned to be in Japan again in August, I decided this trip will be totally non-origami – no paper shops, book stores or Origami House.

We landed in Osaka after a 14 hour flight, three hour transit in Seoul, and one hour on the train in Israel. Immediately, our worries started to vanish. Everything is modern and all direction signs are in English. We found the bus stop right away; the cashier spoke English, and our credit card was accepted. The driver, with white gloves and a hat, smiled and spoke English well enough to assure us we were on the right bus. Later on, the taxi driver; the clerk in the hotel reception; the waiter in the restaurant, all communicated in English. Our biggest worry was gone after the first day. We moved from the “Taxi Only” policy to the economic bus/subway system. It's fast, and on every bus or car there are digital signs and announcements about the next station, in both Japanese and English, including all possible transfers or tourist attractions that are available at the next station. Once you understand the payment system (pay on exit with exact change on the bus; buy a ticket in advance in the subway, which you insert upon entry and exit) and you have the map, there is nothing to it. I guess people who live in a city that have a subway system will be even more relaxed than we were. 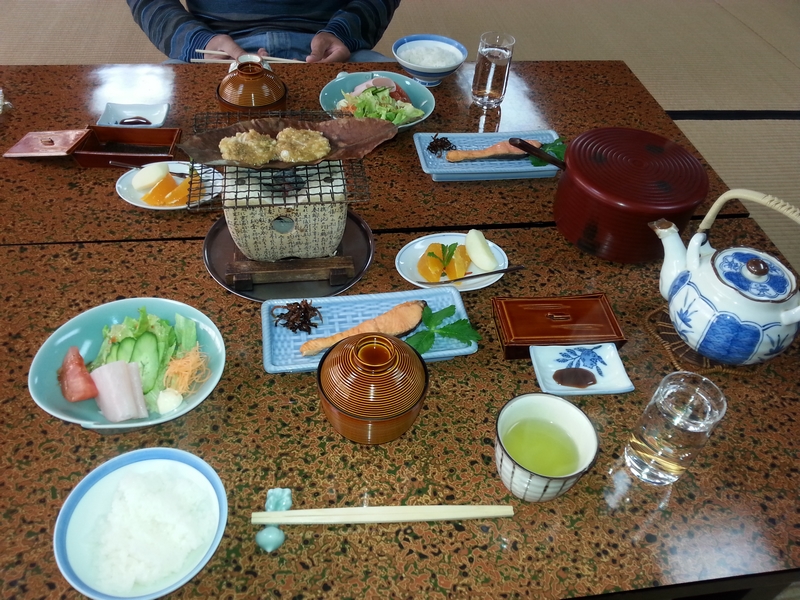 Breakfast in a Ryokan

The rich, healthy, fresh, tasty food was one of the highlights of this trip. I love Japanese cuisine, but my wife was more than worried. She made sure all the hotels had western breakfasts and some decent coffee. The turning point for her was a breakfast in a Ryokan – served on the floor on small tables, it included Miso soup, rice, fried fish, some pickled vegetables, an egg (sunny side up), dry weed, a small charcoal altar with a dry leaf on it, and a strange miso paste being heated on top, green salad with sashimi tuna, and of course, green tea. And I am talking about breakfast. For us it doesn’t make sense to have that much food in the morning, but do try that once. It was delicious, and kept us going through the long day of walking all over the place. 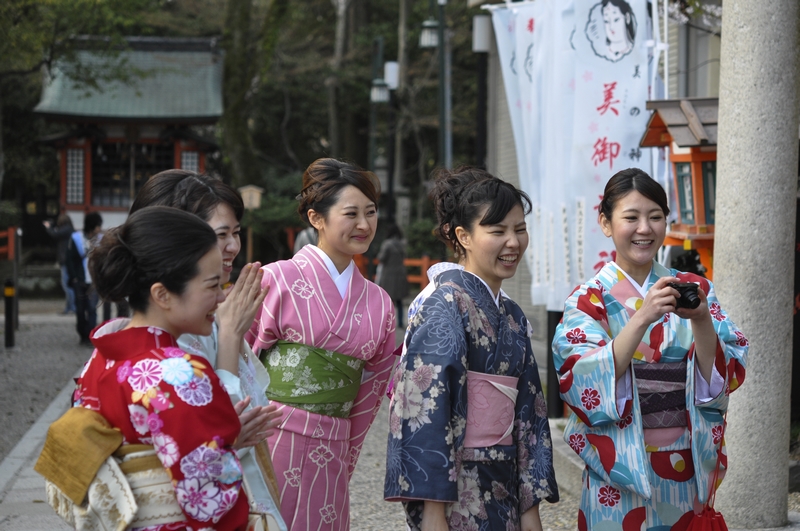 Having fun in Maruyama park, Kyoto

Be prepared! There absolutely are no garbage cans on the streets! Whatever garbage you produce you will keep until you return to your hotel room. And the streets are so clean! Everything is so clean! Discipline is fundamental here. No one speaks on the cell phones in the trains or buses, and all wait in line for the bus, the elevator or the escalators. The sidewalks are divided with a yellow mark (that can also help the blind to get oriented, since it has a unique corrugated texture); left side for those who go that way, right side for those who go the other direction. Honor and pride are next – anyone is proud in what he does for living. The doorman, the guy who sweep the floor, the waitress, the bus driver – all are smiling at you, eager to help, proud of what they do, happy to please. More than once, when we stopped to get oriented, someone stopped to ask if we needed any help or to explain that this bank door will open only at 9:00, but the ATM door is here; and it is open 24 hours a day. 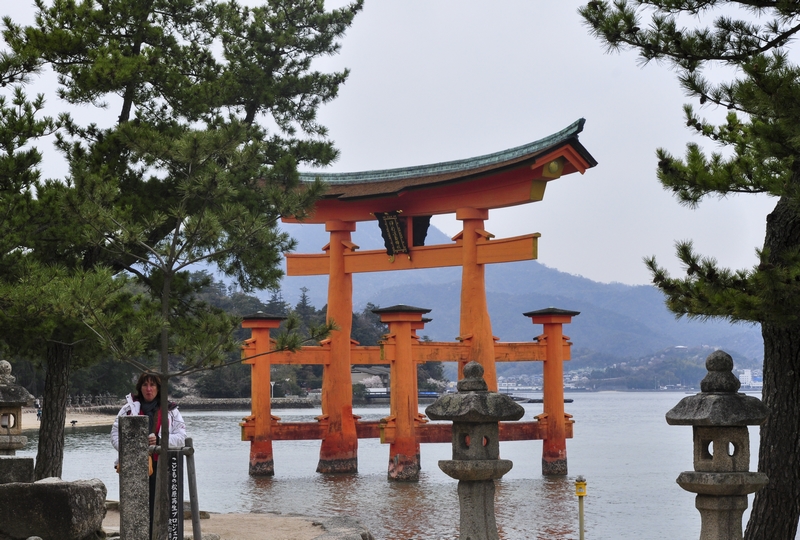 The great Torii of Miajima

The things to see and do

I am re- reading Shōgun by James Clavell. It’s my fourth time, and this last one is the best. Everything in the book is just like what I saw in Japan – the kimonos, the castles, the gardens, the temples, the fans, the dishes, and the food. I am amazed how I can relate to the text in this time. I will not try to turn this into a tour guide. I just wish to explain how so much of the history and the essence of Japan can be seen everywhere – a rock garden in Kyoto, a huge Torii in Miajima, an ancient graveyard in Koyasan. We had perfect timing, and the day we got to Kyoto was the middle of the Sakura Festival – cherry blossoms flood the streets, and the view is indeed a spectacle! The gardens are well maintained, and clean, as if even nature developed discipline here. Design is a major part of the culture here. Everything from the buildings to the chinaware is beautifully made, and with such talent and delicacy – nothing is blunt or loud.


Hundred of thousands of cranes in the Peace Park, Hiroshima

As I said, this was planned as a non-origami tour. Of course, I took a pack of paper with me to doodle during the long hours traveling and to prepare butterflies as giveaways. But this is Japan, and origami found me, even if I wasn’t looking for it. Many stores decorate their windows with simple, traditional models. Besides the well known origami shop in Terminal 1 at Narita airport, I found a small one in Takayama, and a stall that sold cheap models in a morning market. As most of the service people smile at you all the time, I gave away many butterflies, and was surprised how well they were received – you may think origami is to be considered as common knowledge here, but many people were amazed with this La Fosse butterfly – always a success! I planned not to go for paper hunts, and I almost managed to avoid buying papers, but in two places – in Daiso [everything for 105 yen (~ US$1)] I saw this striped paper, and in Tokyo Hands there was wood paper that I couldn’t resist. 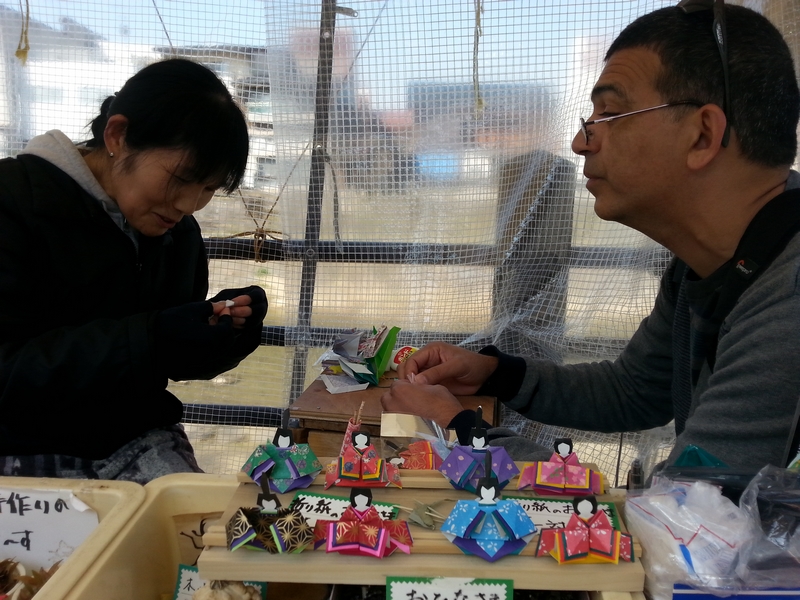 An origami class at the morning market in Takayama

Desserts are made from rice, or soy beans, or who knows what, but not from chocolate. It was tough, but I managed to survive.

I think the second most frequent question I am asked is “Did you study that in Japan?” to which I would answer, “I have never been there.” No more! Do not hesitate! Japan is highly accessible, and (compared to Israel) not expensive at all. For many years it was a fantasy for me, and now I can say – it is all I imagined, and much more!

I have not become an expert in Japan, no, no. but I am willing to share the little knowledge and experience I have about traveling in Japan with anyone who is thinking about going to Japan, either for 6OSME/Tanteidan or for sightseeing. Please contact me directly!