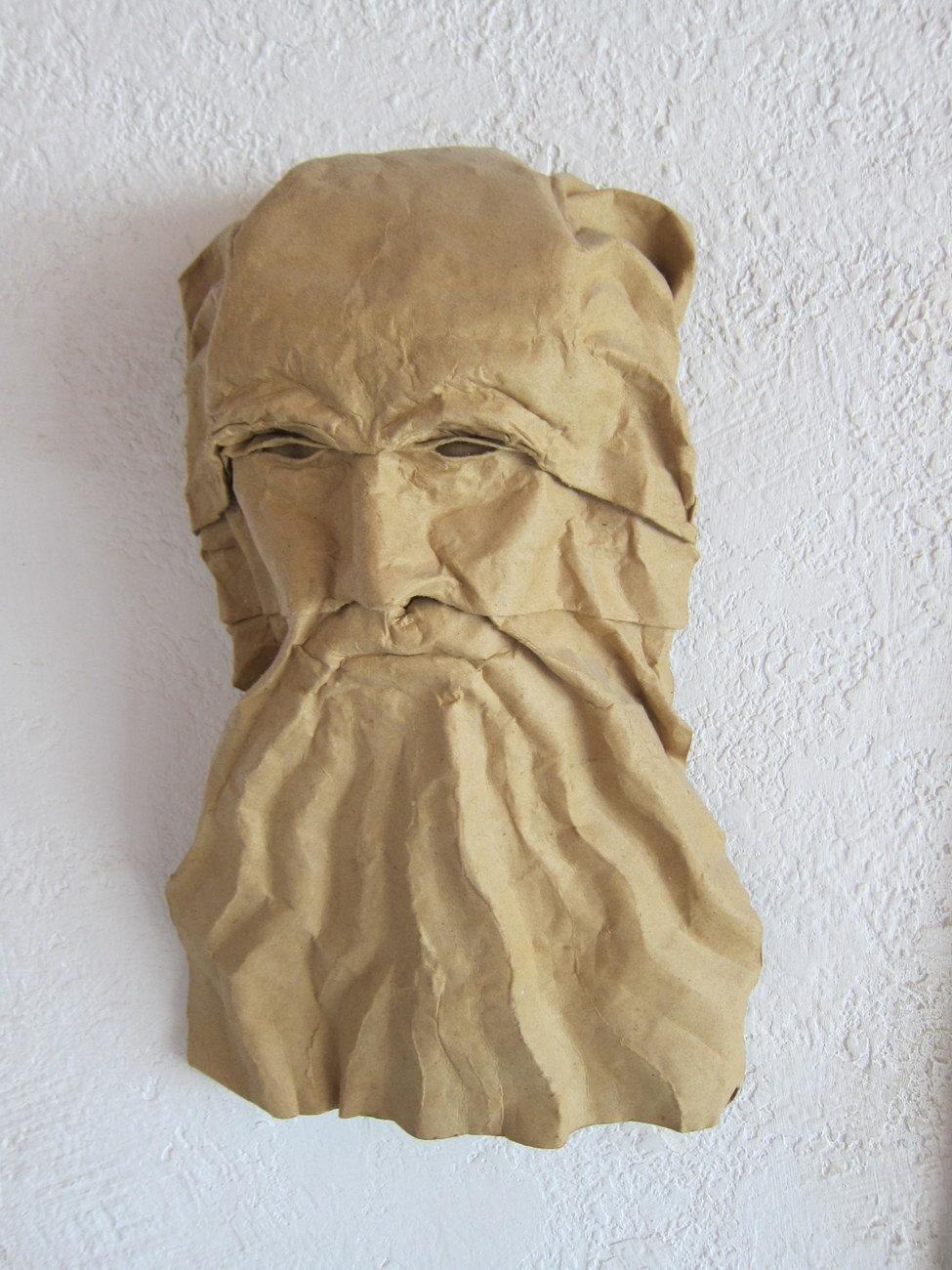 Last fall I was invited to be a guest at a convention in Israel hosted by OASIS, a newly formed origami group headed by Ilan Garibi. I said yes despite the provision that I arrange my own travel. My hosts who included Ilan, Saadya Sternberg, and Boaz Shuval sweetened the deal with offers of fantastic tours, feasts, and comfortable lodgings. So I doubled down on their program. My daughter Avery accompanied me on what I consider the best introduction to an extremely diverse place, both culturally, and geographically. The convention on the shores of the Dead Sea in the Ein Gedi Hotel was the capital of friendly and fun. Here is what made this convention unique in my experience.

Really really old stuff. It is one thing for visitors to go a place with a few hundred years of history. My hosts showed Avery and me relics of early human history dating back 150,000 years. Ilan and Boaz took us to the caves of Nahal Me’arot near Haifa where Neanderthals and modern man may have overlapped. Saadya took us to a wadi in the Negev Desert near his home in Beersheva where Avery picked up Mousterian flint tools just like those we later saw featured in the Israel Museum as being 22,000 – 50,000 years old!

We also visited more contemporary ruins of 500-4000 years ago. My favorite was Caesarea on the coast north of Tel Aviv. There were buildings of Phoenicians, Romans, Pagans, Samaritans, Jews, Byzantine monks, Arabs, Christian Crusaders, Mamelukes, and Ottoman Turks on top of each other as one culture replaced another. 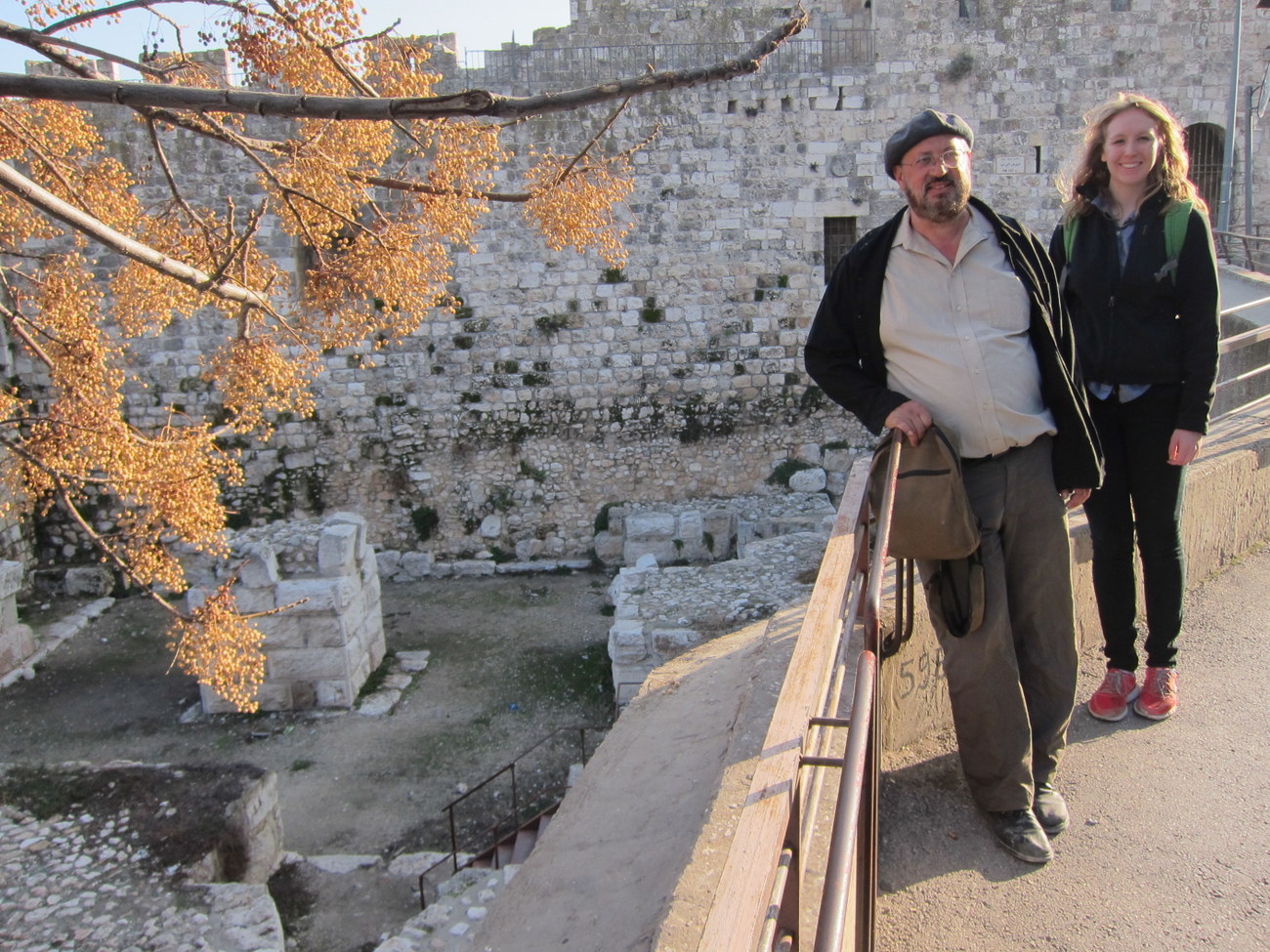 Saadya and Avery in Jerusalem

To get an understanding of its modern equivalent, we visited Jerusalem with Saadya. The Wailing Wall, the Dome of the Rock, and the Church of the Holy Sepuchre are almost a stone’s throw from each other.

Ultra modern. Look out over the rooftops in Israel and you will see solar hot water heaters. Forty percent of the drinking water is from desalination plants. Israel recycles 70% of its waste water. The country is the second most developed nation in terms of high tech industries, and its agriculture and design capabilities are world famous. This is a nation of over-achievers. 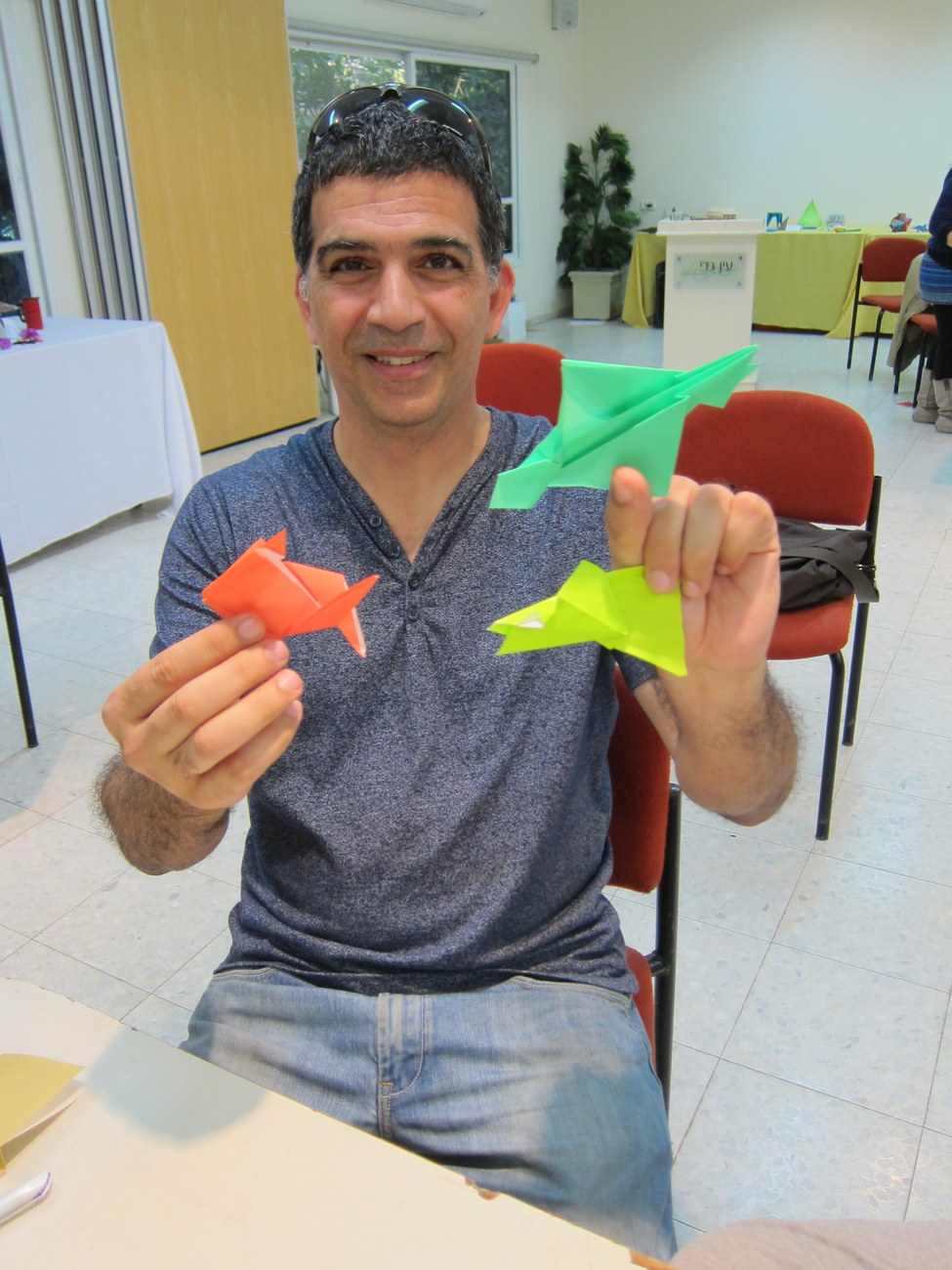 Ilan with three fish he designed in 20 minutes.

Delicious. The OASIS convention was small enough to savor the talents of each of the 35 participants and 15 of their family members. All classes were conducted in English to honor us and Krystyna and Wojciech Burczyk from Poland. Besides the teaching of models, there were 5 lectures on how to design origami. Ilan taught how patterns that initially were designed for furniture ended up in wall decorations and cake molds. Yehuda Peled gave a lecture on circle packing to make his iris model. Saadya’s presentation on curve folding convincingly debunked some of the accepted theories on the subject. I gave a talk on how to take small steps at a time to design models. And Meital Komeny talked about how she manages to teach more than 700 students a week in skills such as making lamp shades.

No convention description is complete without a note on food. Like the setting, it was diverse. Breakfast is the major meal of the day in Israel. And it includes salads, cheeses, and fruits of every description. At lunch Ilan taught me that we have to eat pre-dessert, followed by dessert, meta-dessert, and then post-dessert. This was a metaphor for every day of the convention. At dawn ibex climbed the steep walls of the wadi to eat the botanical garden of our hotel. During mid morning Ilan presented everyone with the world’s first electric-powered paper airplane, the best convention give-away ever! During the afternoon dessert, I learned from 85 year-old Herman Mariano that I might try folding my models in a week instead of several hours to achieve a better look. And at night the mountains of Jordan that were lost in the haze over the Dead Sea come alive with lights to remind us that we were just passing through a place of profound history. 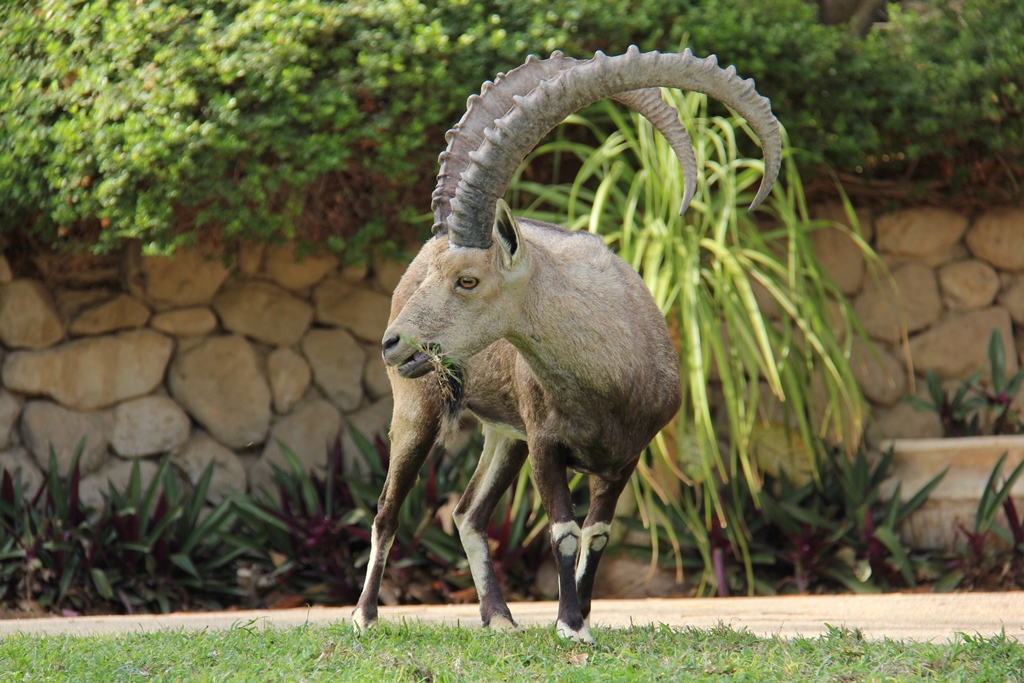 Bernie: “First person that sees a wild ibex gets $20”
Avery: “You mean like those over there in the hotel garden?”
photo by Alexandra Nurenberg