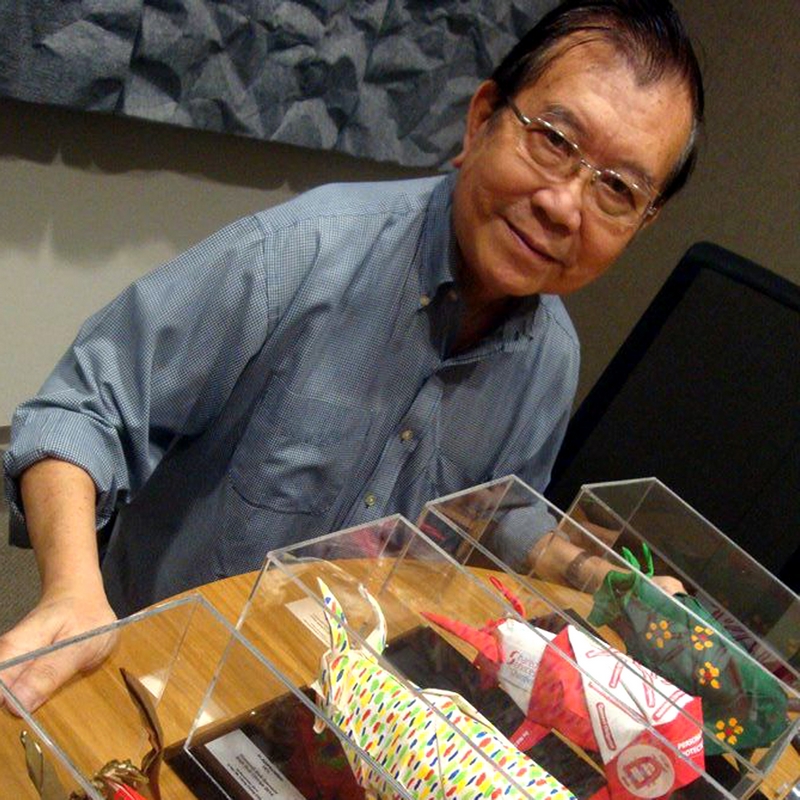 All images by Cheng Chit Leong


Bottle Tree - a few genres of folding
are combined in creating this model. 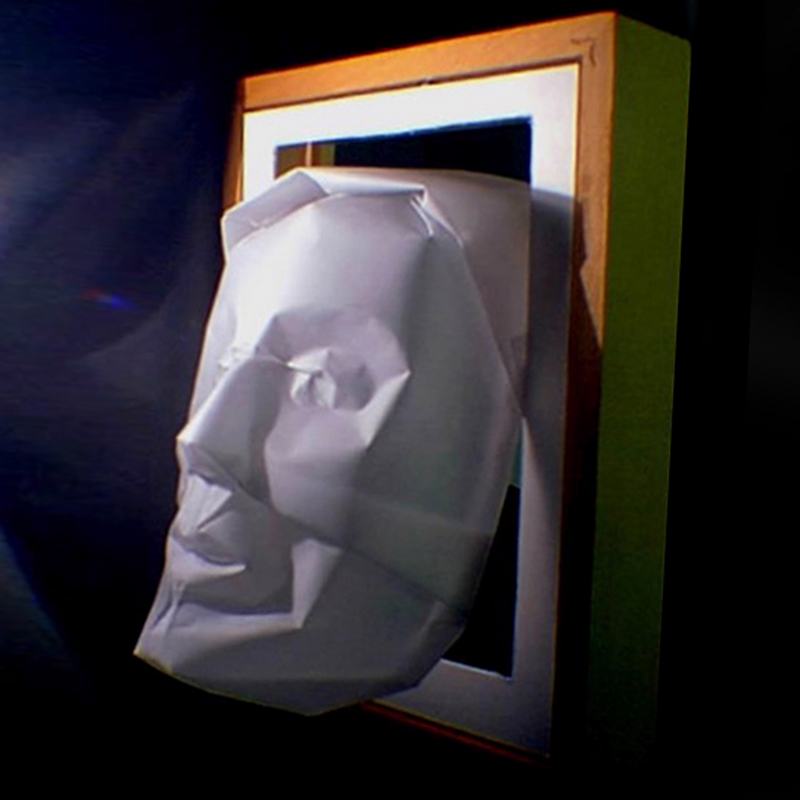 An early creation of a face,
applying 3-D folding techniques.

I have met Cheng Chit Leong twice. The first time was during 2008, in Singapore, as he hosted me and together we went for a paper hunt. Second time was during the 6OSME conference in Tokyo, where he gave an interesting talk about his way of designing 3D shapes, using couplets. Cheng Chit refer to himself as a late bloomer, and while looking at his handwork, one can see his garden is full with flowers from all the origami genres.

Who is Cheng Chit Leong? Please tell me what I must know about you.

Cheng Chit : I am from a country which a former President of a neighbouring country called “a little red dot”. Although trained as an engineer, I spent most of my working life as an investment promoter and economic development planner in a government statutory board; had travelled widely; and had been stationed overseas. This has given me a broad and varied view. As a boy, I had the inclination to make things, like household and other useful items, and had an interest in painting and sculpture. This perhaps led me later in life to do things from successfully filing a patent to taking up origami as a serious pursuit.

What is origami to you? Why are you interested in origami? What was the first model you folded? Can you say origami changed your life in anyway, or is it just a hobby?

Cheng Chit: I started late in origami some 15 years ago. I had looked for something that possibly would occupy my time after retirement, something that could make use of my spatial skill and training in engineering. It was first knots and ribbon folding not origami. But what turned my attention to origami was the so-called “bug war”. Origami artists were folding complex models of insects and crustaceans. I told myself, “Wow! That could be something I could make a contribution to.” Straddling both art and mathematics, origami is design, and as a former economic planner, that has a special meaning for me. Singapore’s economy has moved from a labor to a skill, and then to a knowledge intensive stage of development. But after that what? It has to be design and innovation, and, I thought, origami would be an excellent pursuit for honing design and innovative skills.
After purchasing a couple of books on origami, the first model I tried to fold was Peter Engel’s Octopus. It was a failure as the paper I used was too thick. Then, I managed to get thinner paper and successfully folded the scorpion. Three month after picking up origami, I plunged into design. I did not know much about flat folding, so my first models were 3-D, with straight and curved creases. With the help International origami artists like Robert Lang, Joseph Wu and others, with whom I established contact through the internet, I learned more about origami and flat folding.
Origami, in a number of ways, has changed my life. Many of its principles run parallel to those of life. Like origami, life is a journey of discoveries and the learning never stops. My initial attempts at creating models in 3-D may be accidental, but there are, of course, fundamental principles which I later wrote a paper on. The paper “Simulation of Nonzero Gaussian Curvature by Curved-Crease Folding” which is published in Origami^5. Origami has the severe restriction of folding with a single sheet of uncut paper, but there can be many ways of folding. So, we need to keep an open mind and we need to experiment. More important, we need to learn from one another.

You told me you are a late bloomer. What ignited your creation process? What happened that turned you from a passive folder into a creator? Do you fold other people models nowadays? If so, do you have a favorite designer?


Confucius - This model has the same
base as Eric Joisel’s Dwarf.

Cheng Chit: I started late but I had not been a passive folder. My nature is to explore and so the creative impulse was there from the start. I seldom fold other people’s models but when I do so it is to learn. I do not have a favorite designer but I can count on David Brill, Robert Lang, Satoshi Kamiya and, of course, Eric Joisel and Akira Yoshizawa as my favorites.

As I go through your flickr page I see a huge variety – you tried your hands with many genres of origami; what are your favorite subjects? Do you fold by demand? How do you choose your next designed model? 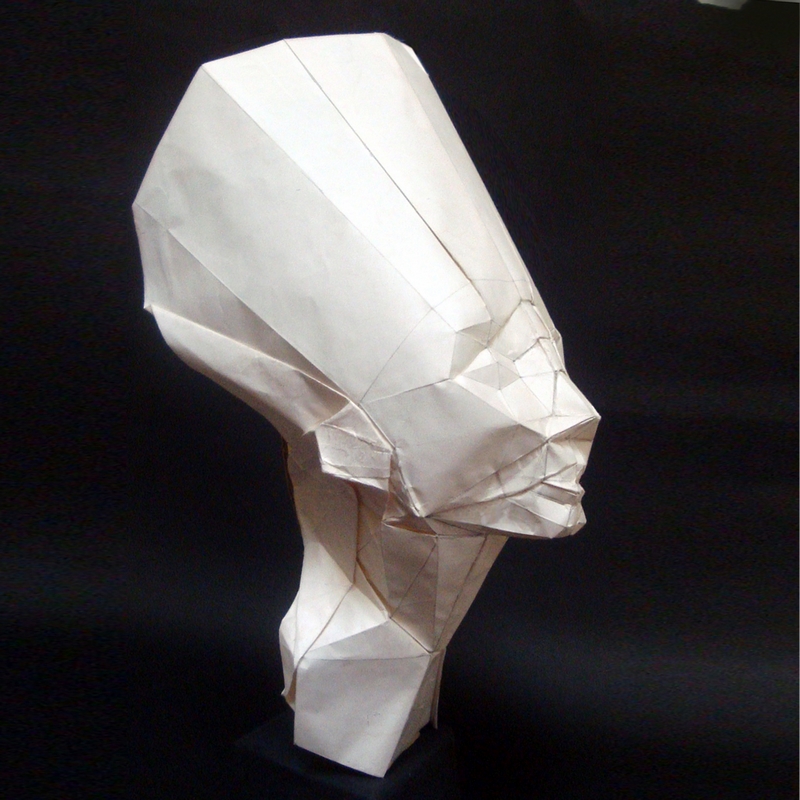 The bust of Nefertiti is represented by closed polygons.

Cheng Chit: Yes, I have tried my hands with many genres of origami, mainly because of my nature. However, folding by demand seldom provides the spark or source for my creativity. The commercial projects I did mostly require modifications of my existing creations or new creations with hardly any new ideas. The bulls I did for the recent Singapore Exchange project are a good example. The original design of the bull itself was, in fact, an early attempt in 3-D folding. Often, my new creative ideas come from seeing a relationship of folded with mathematical forms. The models created by intrinsic curved-crease folding, as described in my paper in Origami^5, is a good example. There are also instances where I see the creation of folding forms as a challenge. That is the case for the paper at 6OSME in Tokyo, in which I presented a method of the folding of models by a closed polyhedral surface.

You developed a systematic way to turn flat paper into the desired 3D shapes, like faces and animal heads. Can you tell us about that? You also design what looks like a “normal way of folding”; what is your way to design those models? 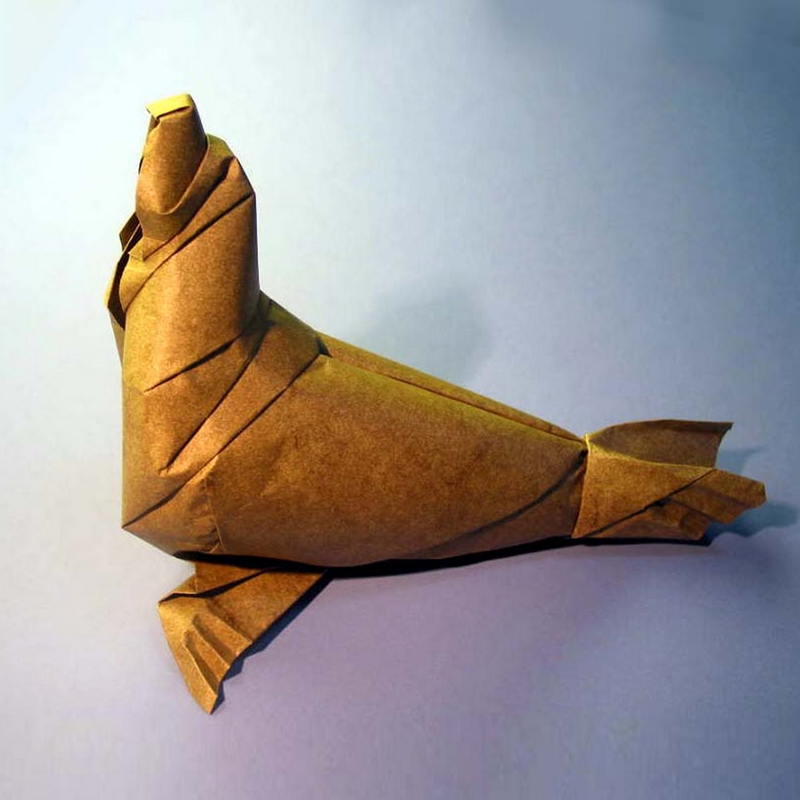 Cheng Chit: I suppose my training in naval architecture has something to do with the way I conceptualize 3-D forms from flat material, like a ship’s hull from flat steel plates. For a ship hull, you cut away the excess sections of the steel plates, roll them into sections of a cone and weld them together. For origami, you find ways of folding the excess paper and tuck the folds away. I call the folds “couplets” as explained in my paper “Simulation of Nonzero Gaussian Curvature by Curved-Crease Folding”. Another way of conceptualizing a curved surface is by adjoining polygons. Again, the excess paper is tucked away by folded couplets. This is explained in my paper “Design of Closed Origami Polyhedral Surface by Straight-crease Couplets”. 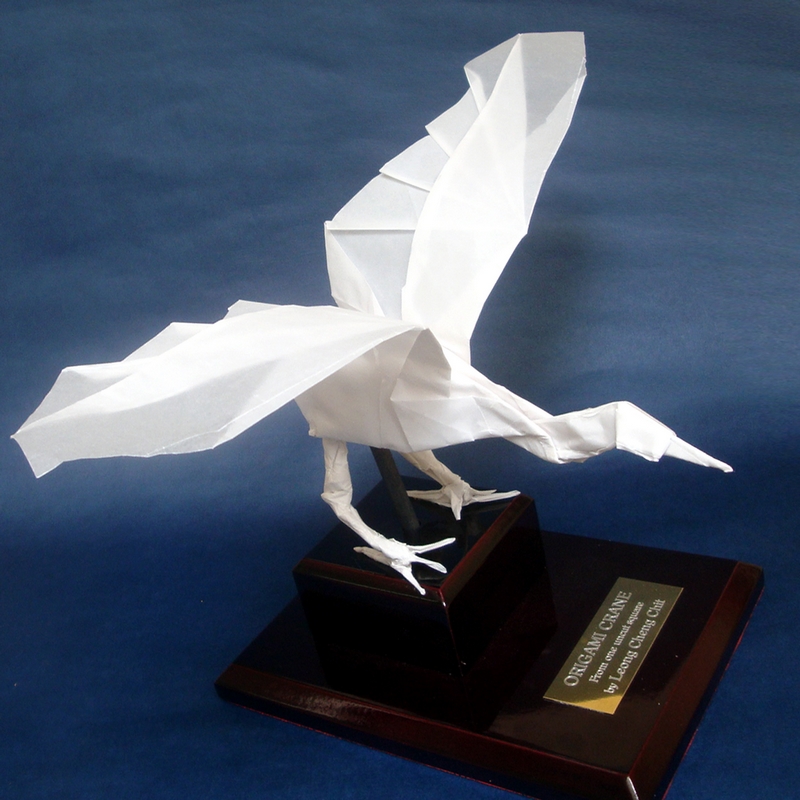 Crane - This model is folded from vellum or tracing paper.

Cheng Chit: Papers are an area which I have not explored widely. I started folding with vellum or tracing paper in my early days. This paper is rather thick but if I use a large sheet it should be alright for folding a relatively complex model. I do use other types of paper, like paper-backed foil and kami but my favorite is Elephant Hide. The paper is easy to crease and the final model can easily be shaped. But as it is still relatively thick, my models are relatively large, which is good as table sculptures. 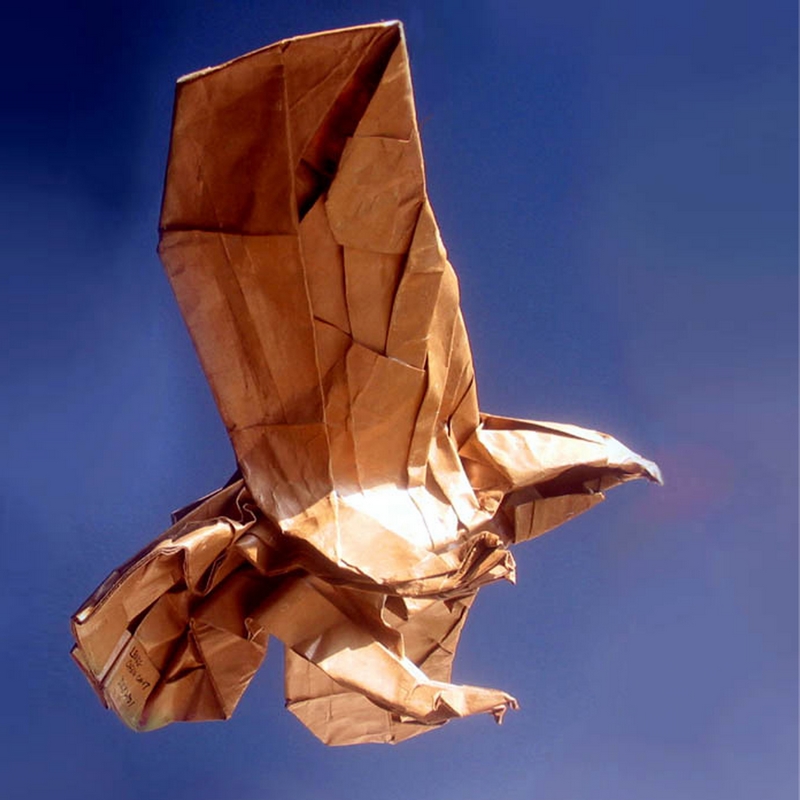 Soaring Eagle
Having seen the Bald Eagles on a visit to Alaska,
I wanted to fold one depicting the posture of an eagle
soaring up into the sky or swooping down on a salmon.

Cheng Chit:I have not consciously thought about it, but if I have to come up with one, it would be: Aim to be the best in whatever you have selected to do. Some people may misinterpreted that I claim to be the best origami artist or folder. This is not so. There are many areas in origami that you can strive to be good at. So in origami, I focus on areas which I could be good at. Of course, origami covers both the technical and the artistic aspects. For example in my horse, created for this Chinese Year of the Horse, I want to portray it as a spirited one, a leader and ready to perform the tasks for the year ahead. The same goes for my eagle. I could depict it as swooping down on its prey or soaring up into the sky. So, as an origami artist, one would need to be good in both areas. 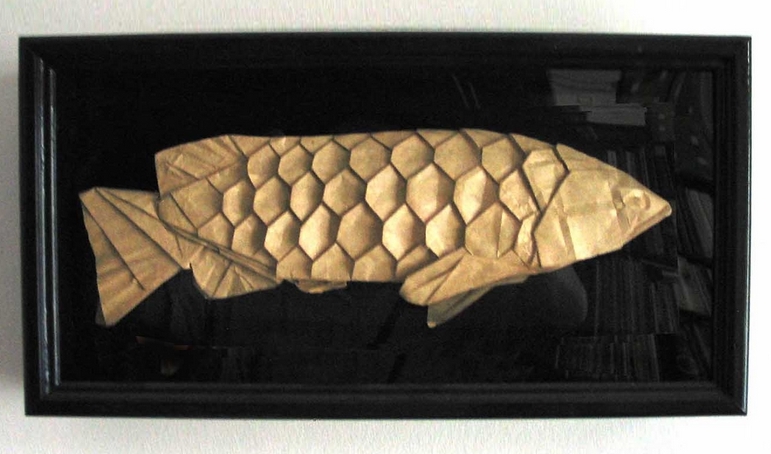 Golden Arowana
This is one of only two models I have folded.
The folding concept is relatively simple but
folding it and folding it well is tricky.

Cheng Chit: I would select my Arowana. The scales are represented by the tessellation. Folding the scales at the centre and towards the front larger gives the body the nice 3-D form. I had two models folded. One was given to the then Prime Minister of Singapore, Mr Goh Chok Tong, during his birthday. In return, I was invited to his birthday party.

Cheng Chit: Origami is a late comer in joining the ranks of the other art forms. Can one make a living in Singapore by being an origami artist? 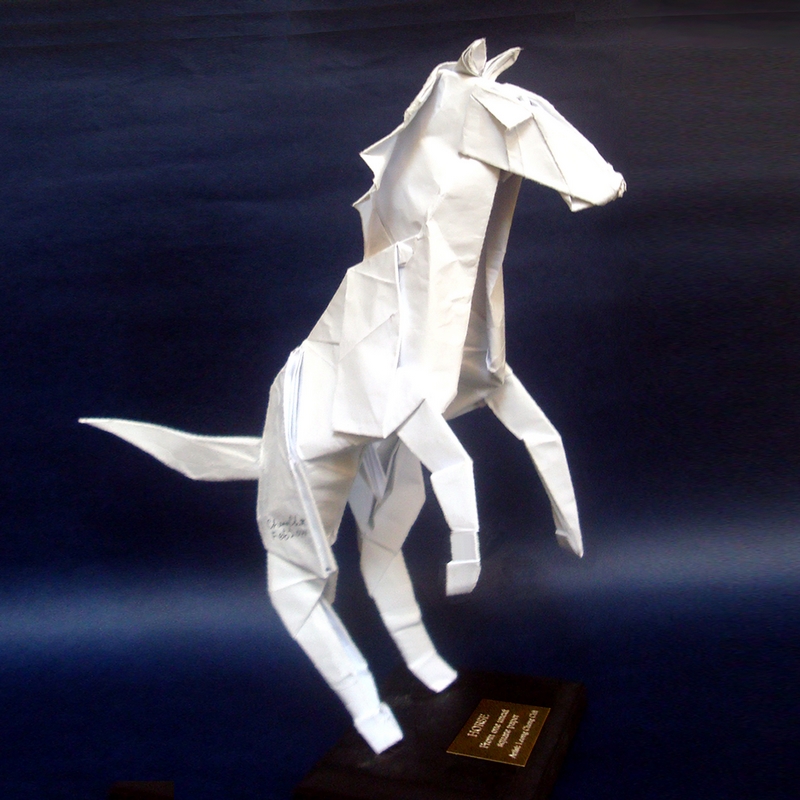 Spirited Horse - 2014 is the Chinese Year of the Horse

To really know a designer, you must fold her models. Here are diagrams for the Spirited Horse.