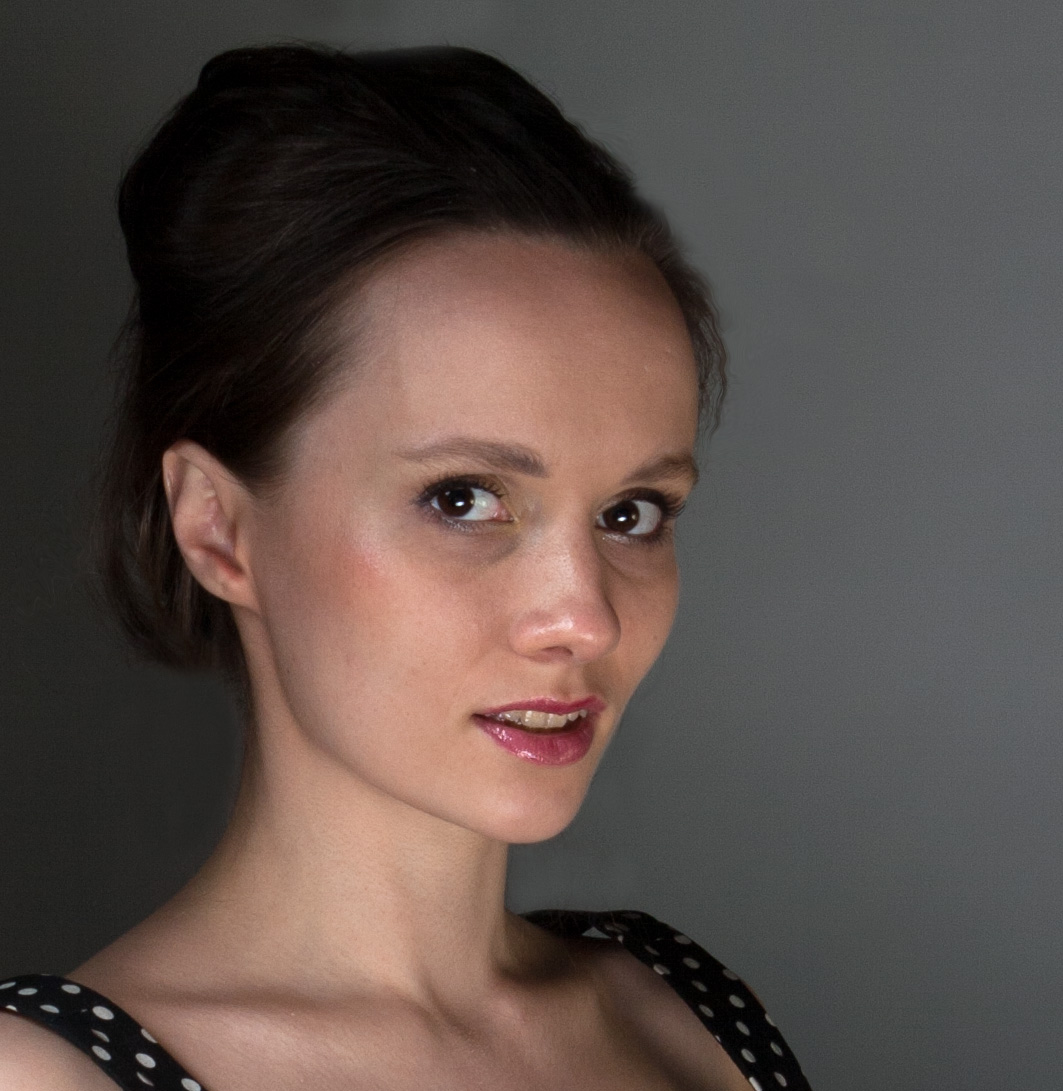 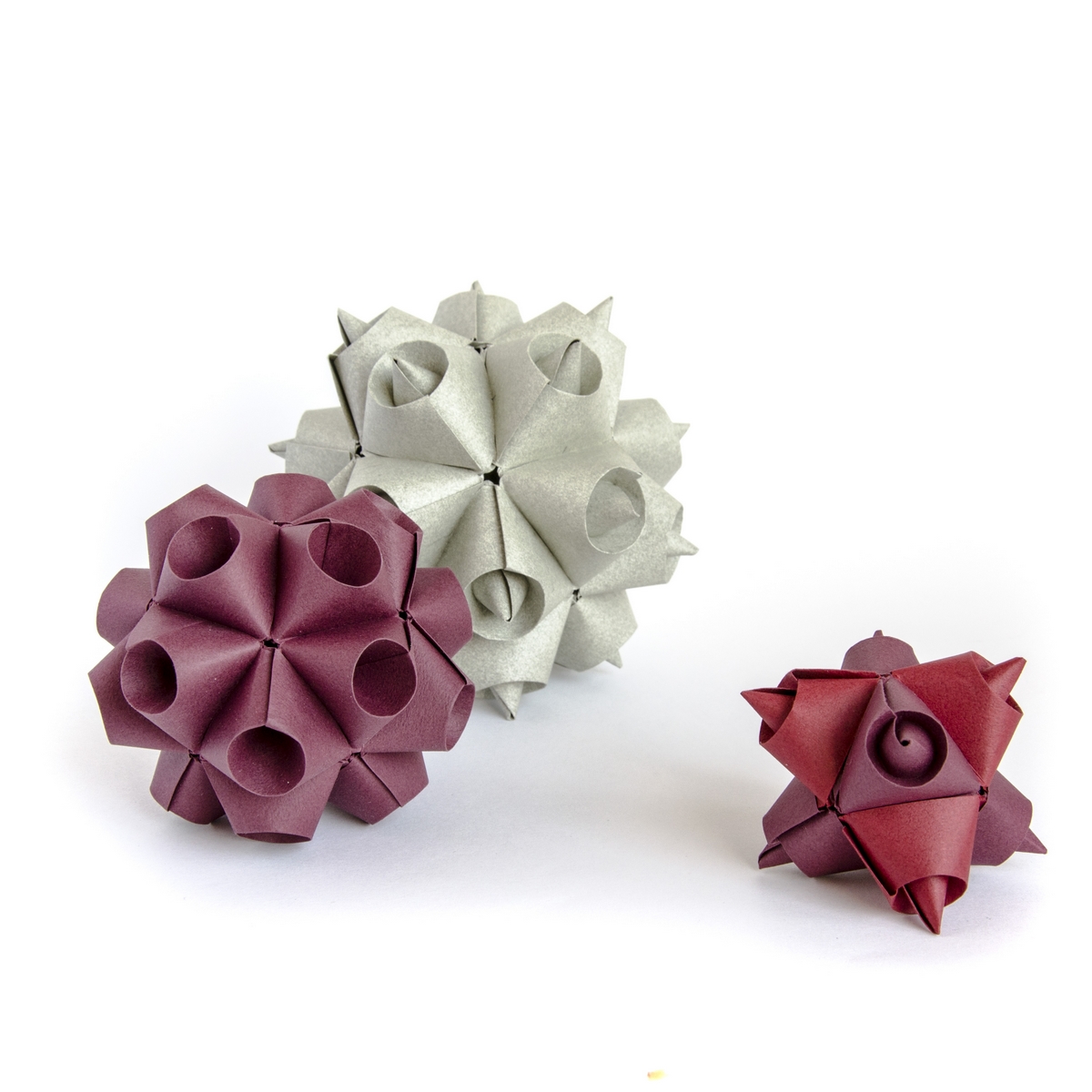 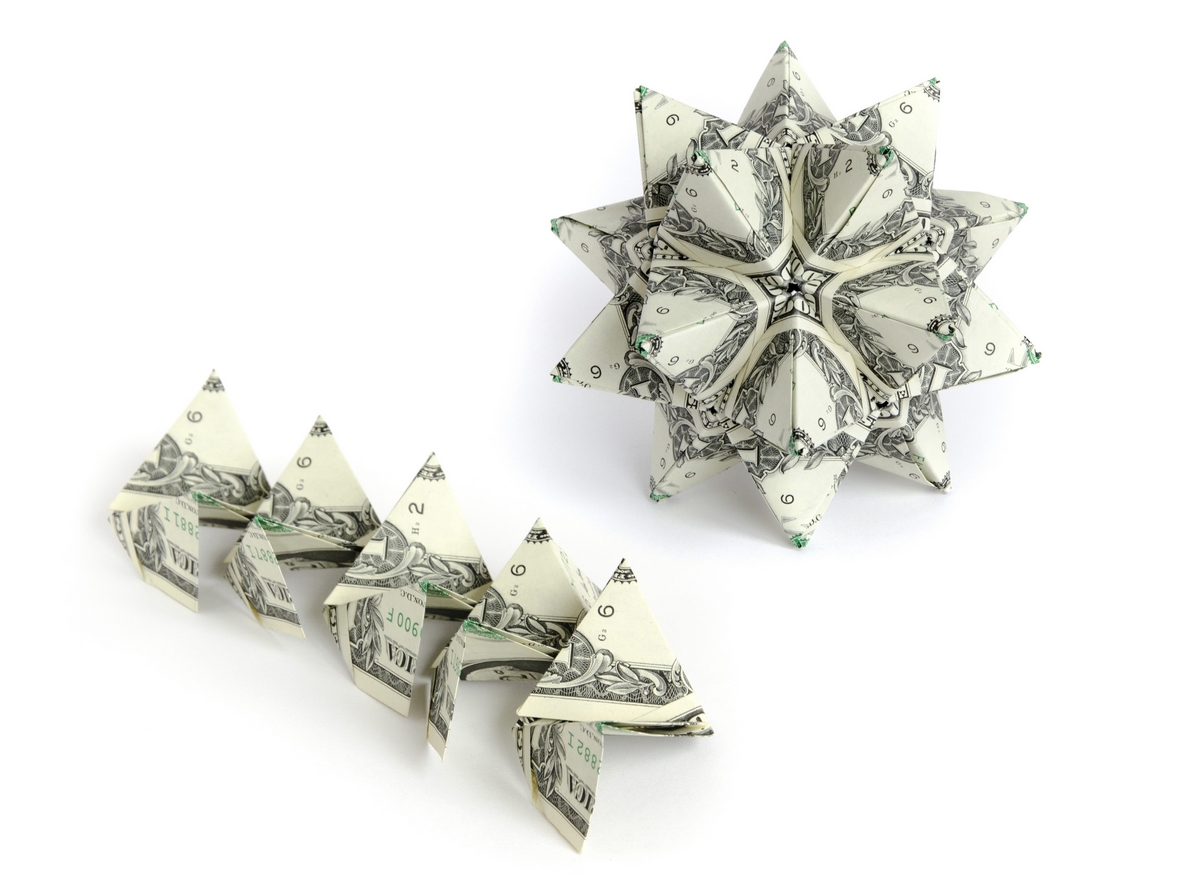 This is the first time for me to interview a person I have not met. I will meet her soon, as we both are guests of honor at the 32nd CDO Convention, in Italy.
Ekaterina Lukasheva (also called Kate) is highly versatile in a very narrow field of origami - Modular Kusudamas. Her site is full of them, with many different shapes and colors, and she also titled her first book accordingly - Kusudama Origami. As always, I presented her with nine questions, and here are her answers.

Who is Ekaterina Lukasheva? Please tell me what I must know about you.

Kate : I’m a pretty little girl (at least in my own mind) who makes beauty out of paper. I don’t sit nights trying to invent something. Instead I catch the ideas flying around me in the air and put them into paper, bringing them to the material world. The ideas are like live creatures; they like it when someone takes care of them. So sometimes they enter my mind on their own; I just need to listen carefully and open up my mind to them.

What is origami to you? Why are you interested in origami? What was the first model you folded? Can you say origami changed your life in anyway, or is it just a hobby?

Kate: For me origami is a big conundrum. If you have a blank sheet you compose a conundrum out of it and you assemble this puzzle. Since the possibilities of the sheet are endless, I get an endless source of interesting puzzles.
My first origami model (I don’t count paper planes) was a traditional kusudama, which I assembled with my friend at school. I fell in love with kusudamas at that point. I can’t say that origami changed my life; I’m too young for such statements. Though it’s very important and interesting to me it’s still a hobby. I have a regular job and a family, so paper folding is only part of my life. I not only fold paper, I can draw, model and photograph. And there were periods in my life when I mostly had other creative hobbies. Now I’m in the origami period: it’s the most interesting hobby, which brings much positive feedback. But maybe tomorrow I wake up and have a great interest for something else: who knows?

What is your muse? What drives your creation process? Do you fold other people's models? If so, do you have a favorite designer? What one origami book will you take with you to an island? If you don’t fold other models, why so? 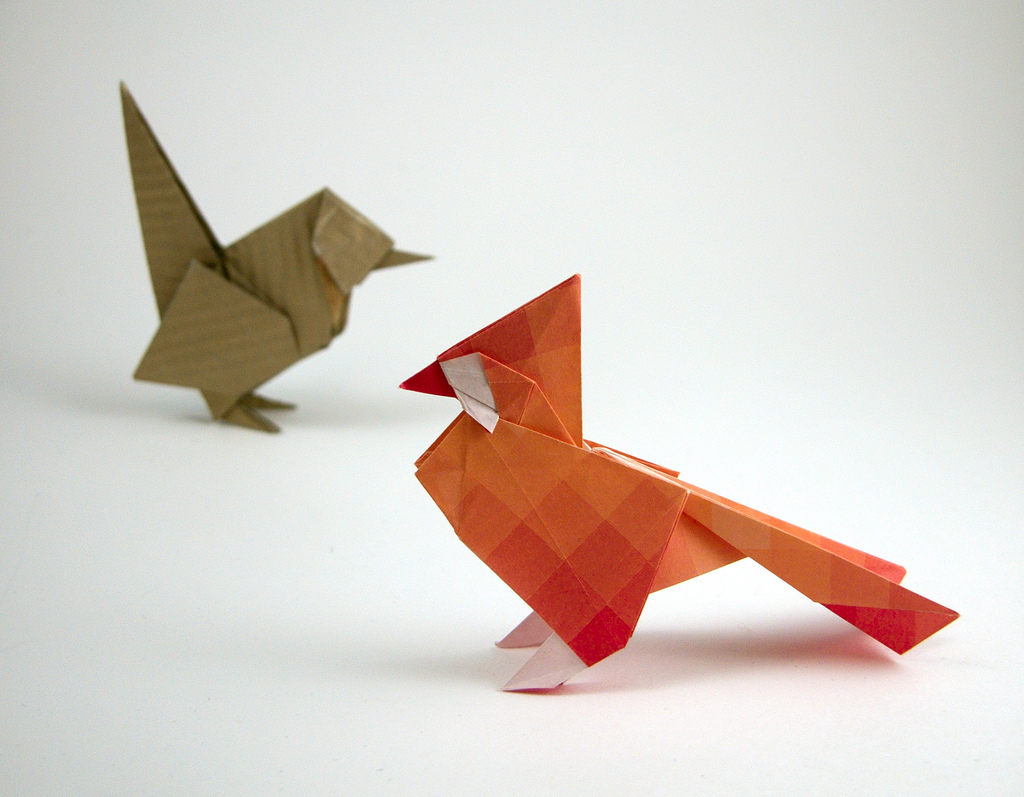 Kate: I never plan my creation process; it’s impossible! Moreover the creative spark appears when you don’t even want it to start! It was a “nightmare” when I wrote my thesis; I had to work very hard and not be distracted by origami. So I cleaned my writing table and started writing the thesis. You can’t even imagine how many really good origami ideas flew in the air and teased me! I couldn’t ignore their beauty. I had to take note paper to make some drafts to capture those ideas. Then I cleaned the table and more new ideas came. The cleaner the table the more ideas tease you! I’m not creating with my brain. It’s more the subconscious process. The best ideas I had flew into my mind like clouds in the sky. These ideas are indescribable, you can’t tell them in words or even draw them; they materialize only in a shape. Of course after catching some good ideas I start working it over, trying to use all possibilities to use it the best way. You can cause great changes in the final modular model if you change some proportions, angles or add some additional flap. Sometimes (rarely) I fold others' models. They are mostly single sheet origami, because I have too much of my own modulars to fold ;) I adore those models that are elegant not only in their appearance, but also in their folding sequence. I like the models of Roman Diaz, because they are not only very lively, but they give me big pleasure with the folding process. To be inspired by others' modulars (or other geometric shapes) I don’t need to fold them. I can be inspired by the set of stellated polyhedra by Wenninger or beautiful architecture, which are not foldable, but still inspiring. So I’m more inspired by the form, but not by the folding sequence. May I change your question about the island and say that I’d better take my laptop with me? If you put me by myself for a year I’ll make several books, because solitude is the best friend of the creator. When there’s nobody around, there is no distraction from the flying ideas.

As I go through your flickr page I see an endless stream of modulars, perfectly executed. It seems you have many, many original modular models. Why? What is so appealing in that field? Have you tried other fields of origami? 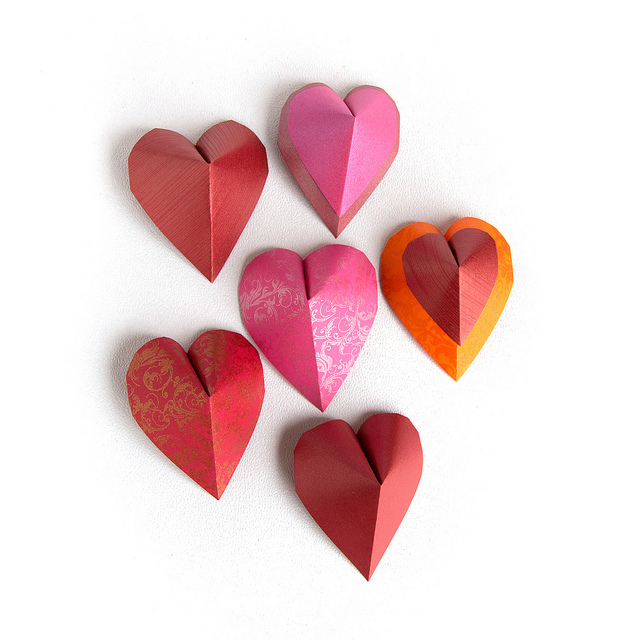 Kate : I like conundrums and construction sets, so folding modulars is two in one. First, you have the puzzle part: how to make the no-glue model out of several papers; second, you assemble your new construction set. I tried to fold others' one sheet origami and it brings more pleasure to fold someone else’s good models rather than invent one's own but not very good ones. And I have neither the conundrum nor the construction set when I try to fold traditional origami. Not counting corrugations I made only two own single sheet models: the Heart of True Love and the Crow, which is so easy that everyone laughs at me when I show that action model.

Too many times I find myself trying to come up with a new model and nothing happens. How can you keep on creating? Is it a fix procedure you go through or are you more of a doodler; playing and searching in a trial and error way? 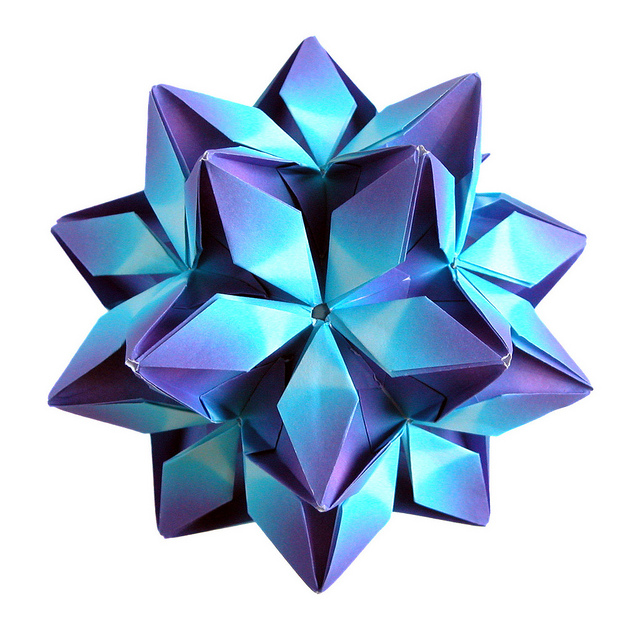 Kate: I can’t say that there’s a process. I may be doodling something when the idea comes to my mind or not. I may be even sleeping when the idea visits me. I invented my Rafaelita model when I was slumbering in the subway. This time I can say that I ended up doodling, but my subconscious was still thinking over some idea. I rarely try to come up with a new model, because I have a large box of still unfolded units which I found not attractive enough and put them in that box. When I need ideas I can open that box and take some drafts out. Sometimes I can take the old little paper and search for the improvement of the old idea. 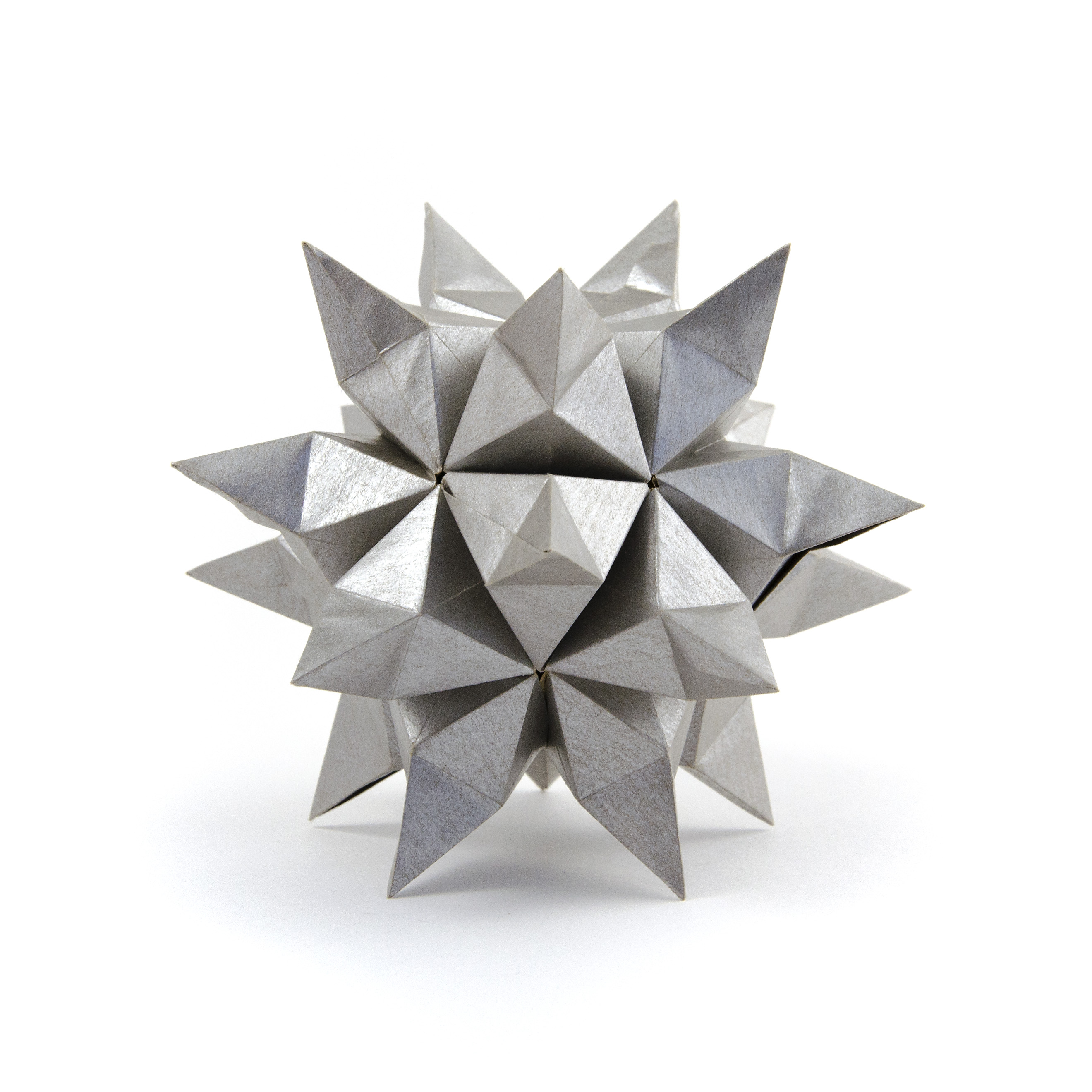 Kate: I use various papers for my models. Since some my models are made of tiny papers there exist pretty much various colored papers for crane folding. I usually use 2 different types of paper: thick for geometric modular and corrugations (EH, Tant and designer papers of ~120gsm) and craft and packaged origami paper (kami, chiogami, harmony paper) for the models which have many layers and require thin paper. In the latter case the process of choosing the paper may be extremely long. It sometimes turns to a nightmare, since I can’t decide what will better match the model. In those cases I ask friends to name the random color to ease the process :) My favorite paper is silver craft: It matches nearly every model and gives a moderate stylish look. 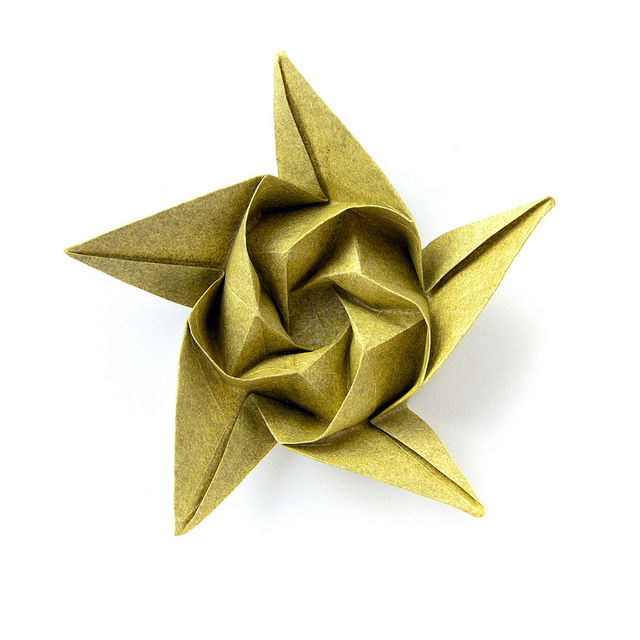 Kate: At the very beginning my message was “Creation is easy!” because some people thought that origami creators are semi-gods living on Olympus and eating nectar. That’s not true. Origami creators are the people who simply can be free enough not to fear to experiment. When one breaks this barrier and creates one's own model s/he understands that creation is easy. Since my message found its followers (Russian kusudama community now has many prolific authors) I’d say that it is not an actual motto. For now I just share the beauty with others. Beauty itself is a message. Beauty can heal hearts and make people happier.
If to speak of an origami related motto it will be “Origami is ART!”. Many non-folding people don’t perceive origami as something serious. And modular origami is something even less serious than traditional single-sheet representative origami. I’d like to prove to broad masses that it IS art and it can be not only a child’s game. Making good models and putting them on the Internet helps to show that it can be very beautiful (I don’t only mean my models or my pictures). 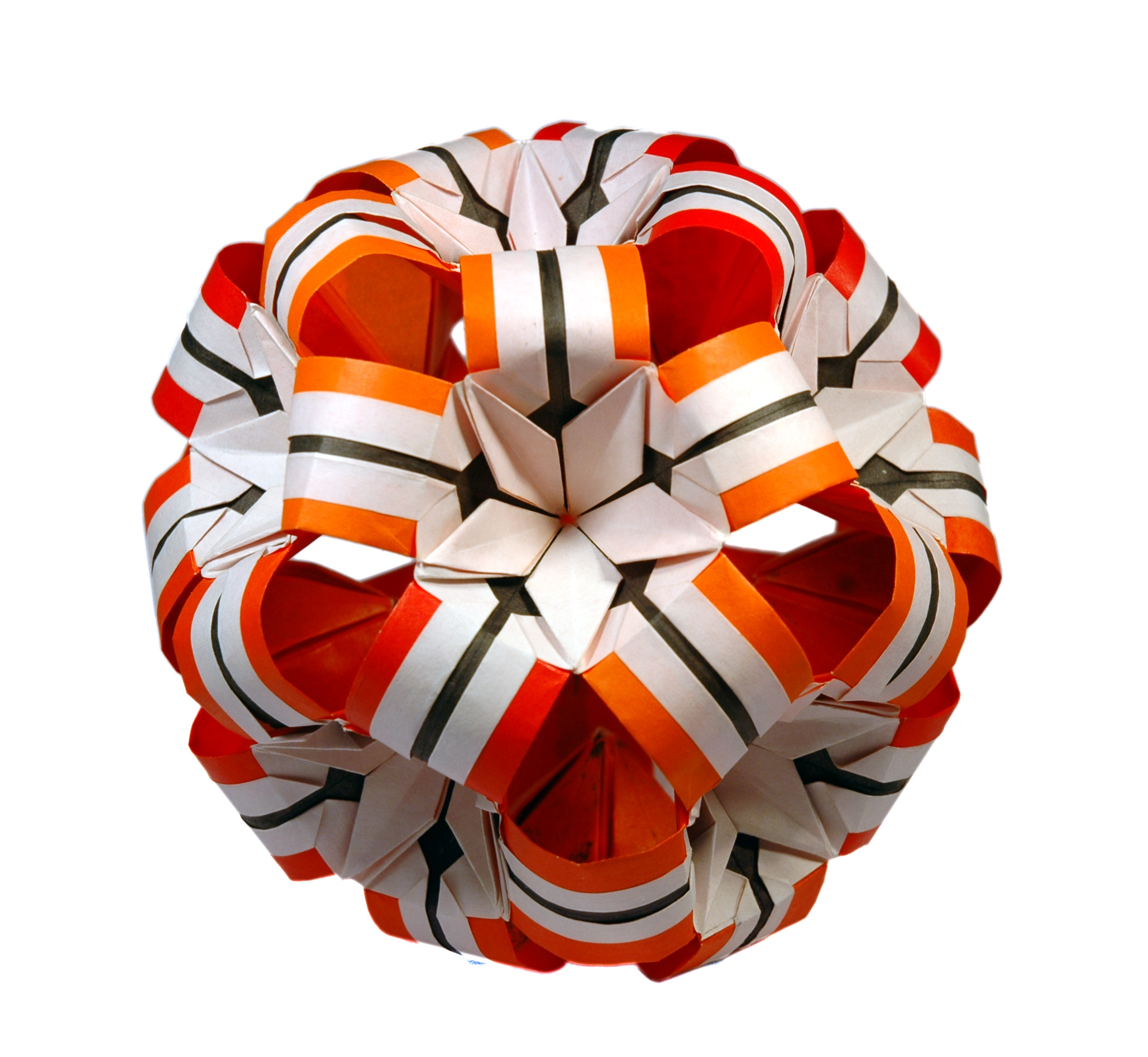 Kate: Grafique is one of the first models that made me feel really delighted with my own work.

Kate: What will be the subject of your next book? 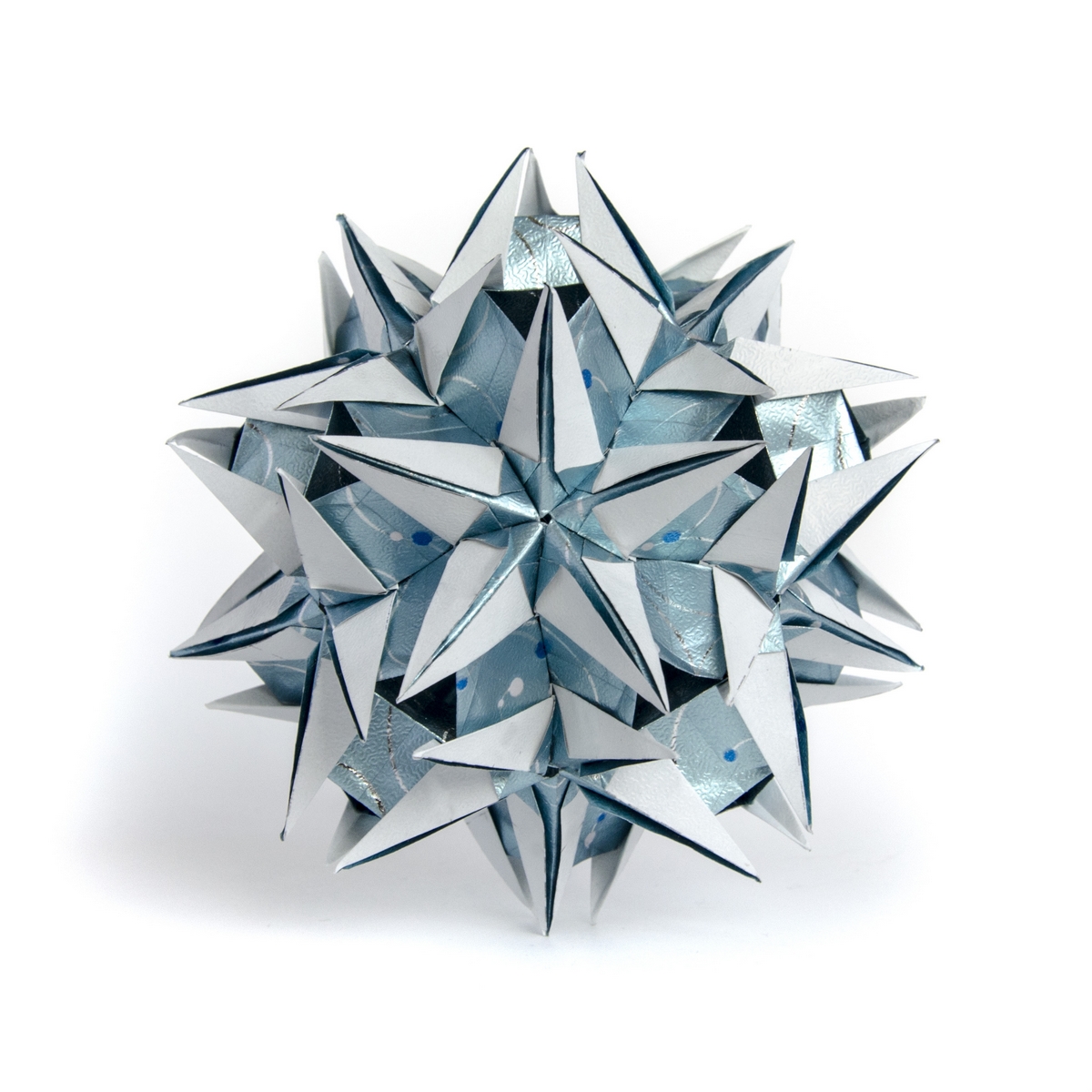 To really know a designer, you must fold her models. Kate is not new to The Fold pages, contributing models such as the Snow Queen on the left. Here are diagrams for another model of hers, called Almandine.