I was first introduced to Mi Wu's origami designs in the free 2017 Chinese New Year collection of origami roosters. His bicolor designs featured innovative folding sequences that are both challenging and enjoyable to fold.

Tell us about yourself.

When I was a child, I would often think about problems while involved in other activities, like eating or walking. This gave everyone the impression that I was absent minded or confused. "Mi Wu" in my hometown speech refers to people who are confused, so I chose it as my internet name. My real name is Guo Song. I'm an architect and live in China's northern city, Dalian. I began exploring contemporary origami about eight years ago, when I was 31 years old. Four years later, I tried to design my first original model. It was a painful experience. I had excessive expectations, a poor process, and a terrible result. Luckily, I persevered and designing became addictive. Compared to my architecture work, origami design is a more challenging and fulfilling experience. 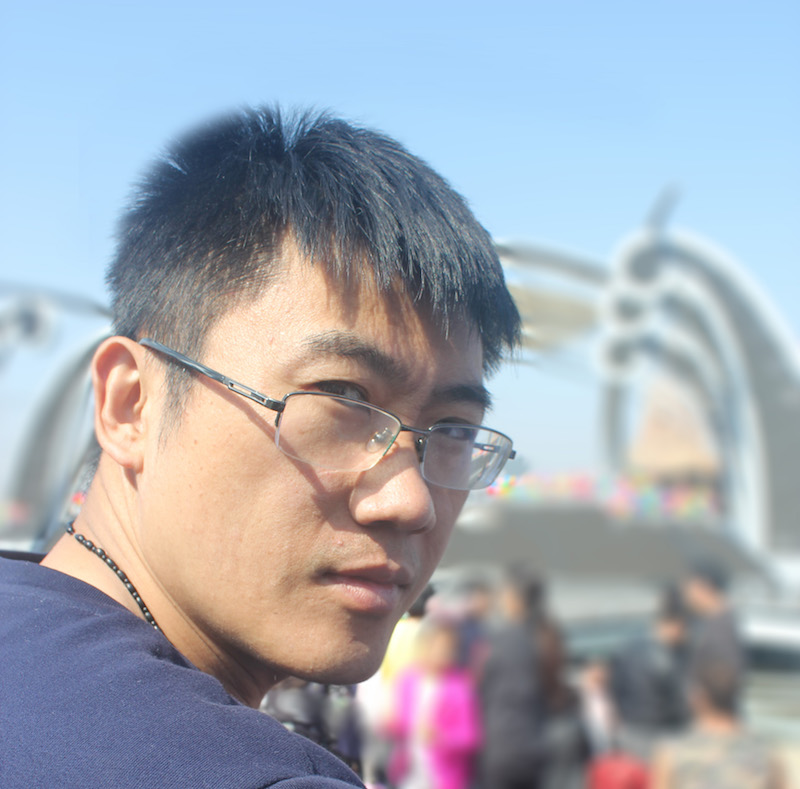 Your models are all bicolored, displaying both the color and white side of paper. How did you decide to focus on this style of design? How do you go about creating these very novel effects?

I've devoted my attention to bi-colored designs. Some lie flat (such as my flags and playing cards) and others are bi-colored animals. In my opinion, much of the design theory for modern origami has been perfected to a level where if I simply do circle pleating or box pleating, it's quite likely that I am repeating the work of others without my knowledge. So I've focused on bi-colored designs so that I can create unique and challenging pieces of work. 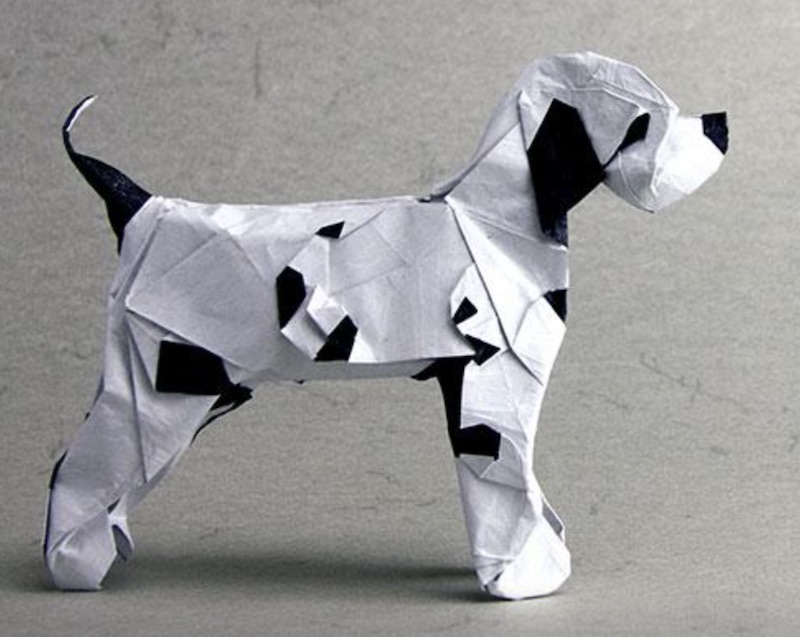 For bi-colored models, especially those that are flat, making effective use of the paper edges is crucial to a good design. Before I begin creating a flat, bi-colored model, I make a preliminary plan, mapping out the trajectory of the paper edges according to the final result I'm trying to achieve. The design process invariably requires "self-compromise." I always begin with the goal of trying to achieve complex effects, and then decide, as I fold, which effects must be retained or discarded. Because origami is a type of artistic design subject to many limitations, I think "subtraction" (the need to compromise) is more realistic than "addition" (We cannot always expect God to surprise us with unexpected design discoveries).

Mi Wu's initial conception of a lion and the final model

Which origami designers have inspired you?

All origami designers have given me inspiration. But it was Hideo Komatsu who first sparked my love of modern origami with his charming creations. His models are attractive and not too thick. And while most of his models are complex, they can all be done with ordinary paper. That was important to me, since I didn't know about specially prepared origami paper and used ordinary paper when I began experimenting with modern origami.

Here in the U.S., we don't have much exposure to origami in China. Can you tell us about the Chinese origami community?

In China, modern origami is a minor hobby. Many of us fold origami as children, but it is simple and traditional. In this regard, I don't think China is unique. In mainland China, there is still not a well-established origami association. All origamists communicate and connect with each other through online bulletin boards and other social media. China's immense population guarantees that it has origami visionaries. What it lacks are opportunities to be discovered by the worldwide origami community. For example, Zhangyifan and "212moving" are far better origami designers than I am. I believe they will receive the attention they deserve in the future. In recent years, more and more origami designers from China have published their models in various origami books and social media.

Two years ago, my friend Lu Hao and I observed that there were many good origami designers in China but other than the two of us, none of them were able to diagram models. We thought about making a Chinese New Year-themed book with contributions from four very good origami designers: Zhangyifan, 212moving, Chen Shu, and LLH. And then we invited my long-time friend Ryan Dong to join our project. The seven of us became the first members of the Spring and Autumn Origami Club (SAOC).

For the past two years, you've published a free book of Chinese New Year-themed origami. How did this project begin?

Chinese New Year is a very important festival, and the Chinese zodiac with its twelve animals is popular with origami lovers all over the world. This is our second year of creating the New Year publication. We hope to continue this tradition. Starting next year, we will open the collection to designers outside the SAOC so that origamists from across China can participate. And now that more designers are learning to diagram, the work of the editors is becoming simpler. Starting in 2018, we will also publish an e-magazine called Origami Record and establish a website. By involving more people, I hope that our efforts will grow into a stable platform for disseminating origami. 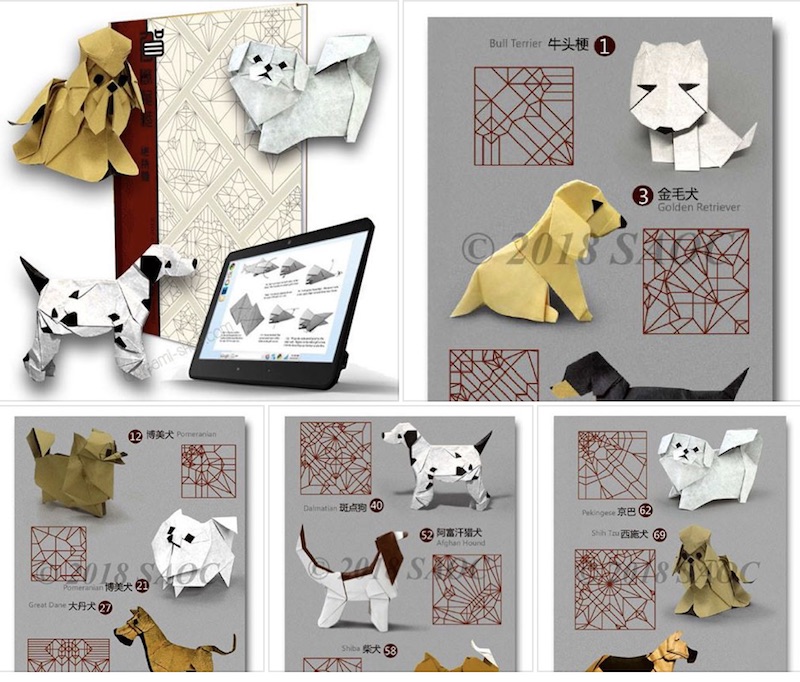 If you could pick just one of your models to define your style, which one would it be and why?

If I could choose just one model, I'd pick Diamond K. Its entire design process was quite typical for me: I began with a base that I've used for other poker card designs and did lots of sketches to prepare for the design. The process required self-compromise, and I ultimately obtained a result that I feel is relatively satisfactory. 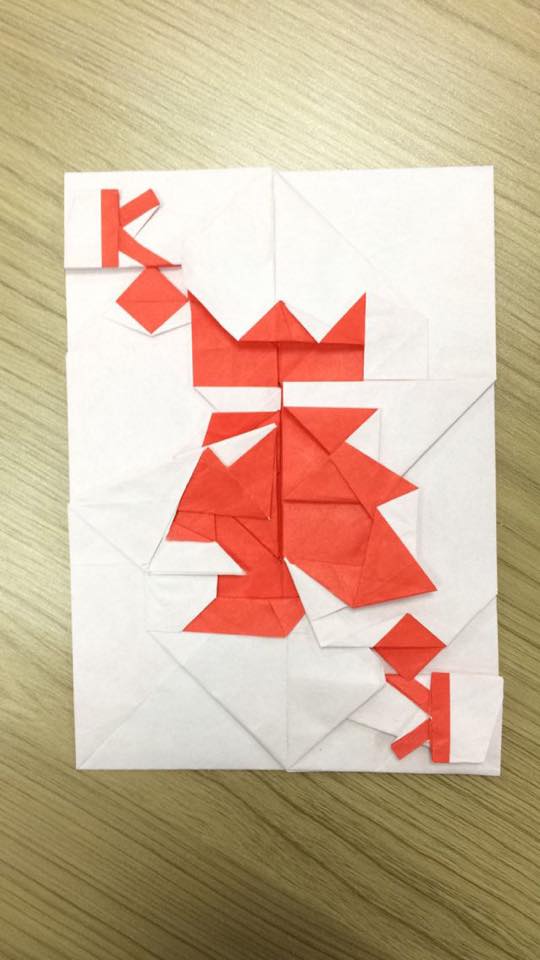 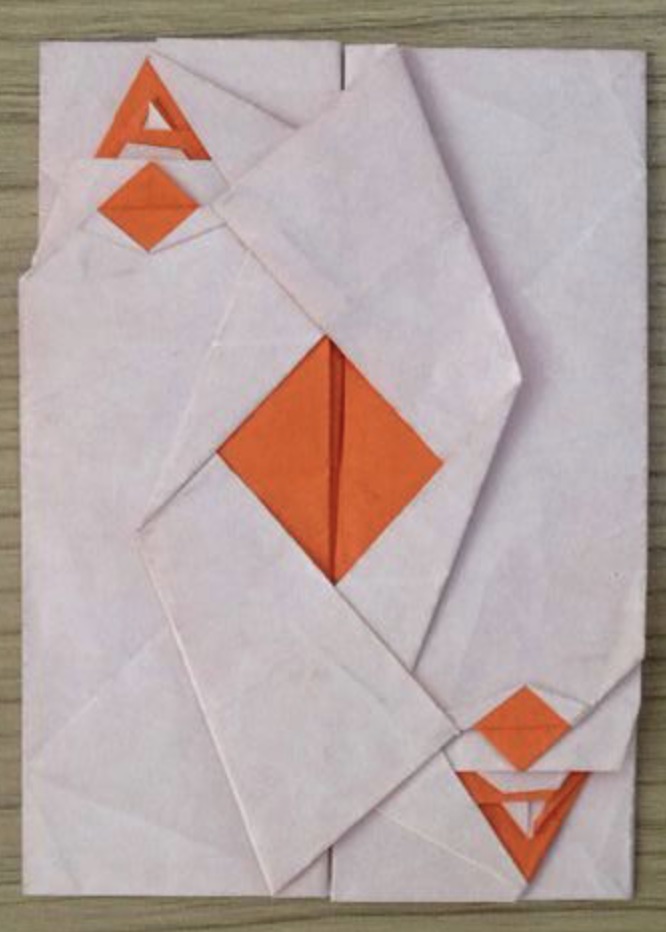 To really know a designer, you must fold his models. Here are the diagrams for a Diamond A playing card.