Who is Yara Yagi? Please tell me in five sentences what I must know about you.

Yara: I was born in the 1960s, had a fantastic childhood during the 1970s and an unforgettable youth in the 1980s. I’m half Japanese, half Italian. Graduated in Letters. Graceful as a bear, sociable as a tiger and talkative as an owl. I love to cook, write letters, starry nights, smell of rain, fireflies, silence, autumn, playing cards, chocolate… 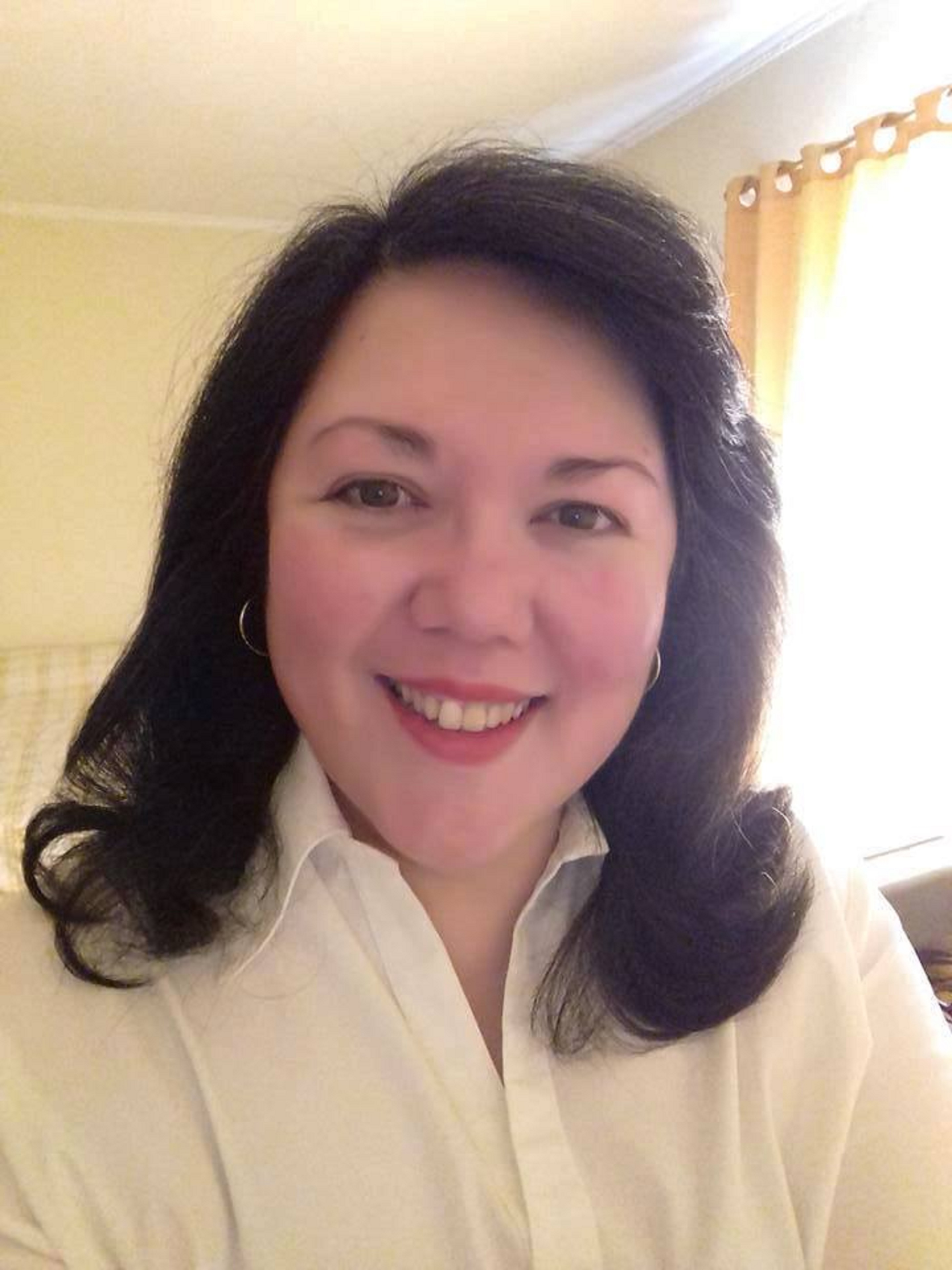 Yara: I could not imagine origami would change my life so much. One day my mother came home with a small paper elephant that she had bought from a boy. It was very interesting, so I looked for origami on the Internet and I discovered a new world. At least for me… In the 1990s I had bought a book by Zulal Ayture-Scheele, but I couldn’t fold a lily! The only things I had folded until then were boats, airplanes and caps. I didn’t even know that this was origami.

I began to fold with videos that I found on the Internet. My first model was a Sonobe. I learned a lot with Isa Klein’s blog. She is a lovely girl and helps everybody.

My first creation was a kusudama, but I don’t consider it too much because it involves… glue. My first good model was a little owl.

A difference I share with many paper folders, is not knowing this art from childhood. My father, although he was Japanese, grew up as an immigrant in Brazil in the middle of World War II. He faced hard times and didn’t learn origami from his parents, so he couldn’t teach me. I began to fold six years ago and that belies the saying that old dogs don’t learn new tricks! 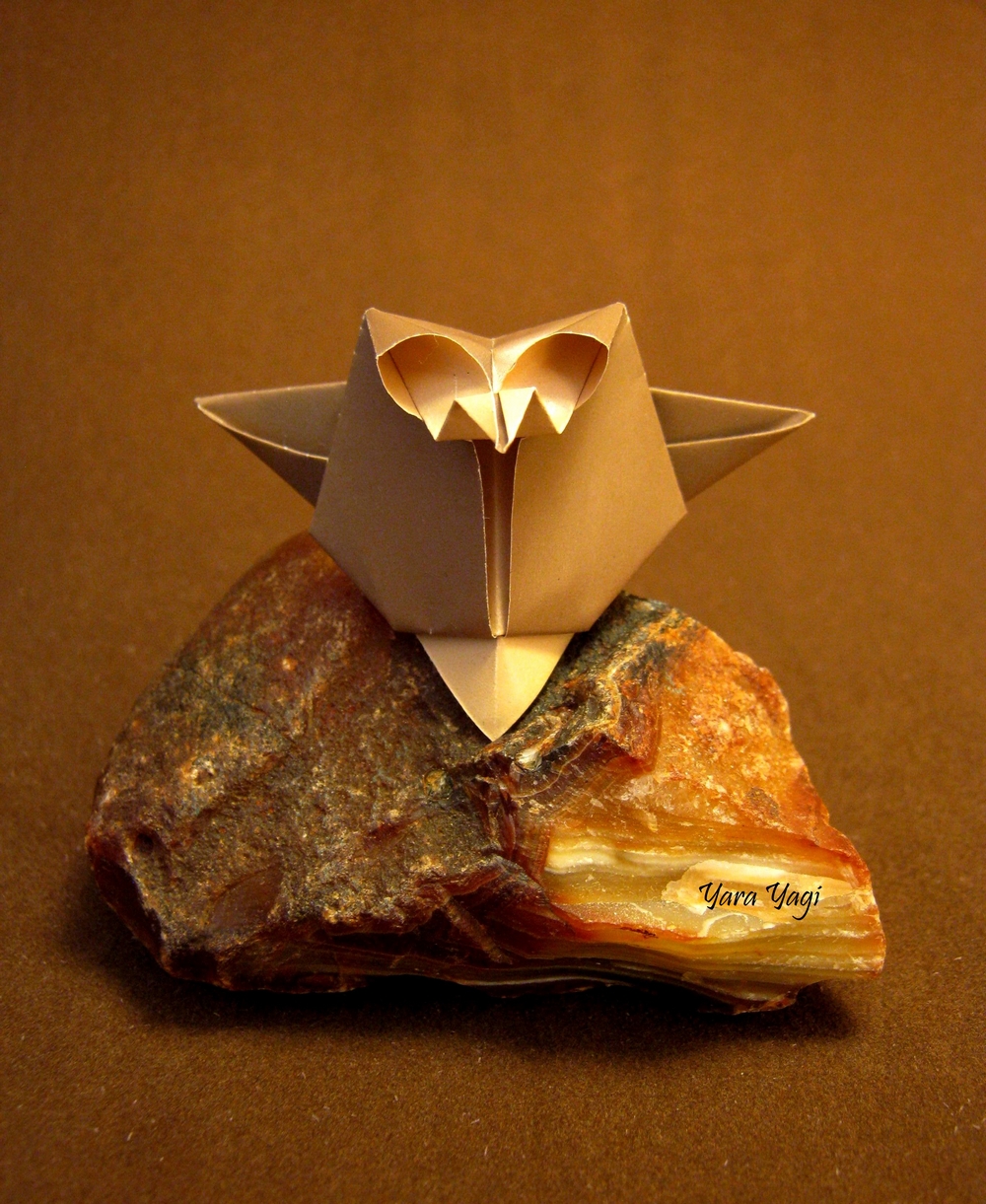 Little owl All pictures are by Yara, unless stated otherwise.


What is your muse? What drive your creation process? Do you fold other people models? If so, do you have a favorite designer? What one origami book will you take with you to a stranded island?

Yara: Challenges! My eyes shine when I read the word “impossible”! Most of the time I cannot do it, but I have to try, I have to think of a solution to the question. That is what moves me.

Six years ago I began to fold everything. Passionately. Models by Román Díaz, Anibal Voyer, József Zsebe… Doing test folds for Halle gave me also the chance to know the work of great artists, including him. He taught me who is who in the origami world, showed me old and precious models of a romantic era of the origami and even taught me Spanish! Halle is a wonderful person and creator. I joke with him saying he is the Boss and he says the only boss is Bruce Springsteen. I could say he is my mentor. Halle, not Bruce!

It’s difficult to choose a favorite designer. I admire the beauty, pureness and elegance of Giang Dinh and Hoàng Tiên Quyêt works. They cherish the paper and manage it with respect. It is sublime!

Well, my collection of origami books is still small but a book that I surely would take everywhere is Drawing Origami by Halle, Pere Olivella and Nicolas Terry. Those guys did a great job. The book consumed months of research, photos, drawings, tests and gave to new creators the opportunity to show their works. It’s a book made with dedication and passion!


Just when I think I know who you are, origami-wise, you start a new line of models, unlike the previous one. Can you define the types of creation you prefer to make? How did it change during the years? And where are you heading; if you know…

Yara: Once my dear friend and fantastic artist Rui Roda said to me that we were chosen like test folders because we are ordinary folders, nothing more than that. He said if we were amateurs we wouldn’t be able to fold the models and, otherwise, if we were experts we wouldn’t have difficulty on folding anything and that is not the purpose to test diagrams. So we show to the “Boss” where and when we find a problem in diagrams. Rui is right. We are just simple folders.

And, as a simple folder, I like simple models. Someone will think: “Oh, yeah, she says that because she cannot fold complex ones. That is true! Returning to the question (oh, my crazy Aquarius mind…), I like to see a model with a few lines and a good result, as they say in Spanish “sencillo y resultón”.

Thinking that less is more, I try to create following that guideline. An example of this is my “windy days”, a tree curved by the wind, with a few straight lines and curves, which are the soul of the model. I love curves and the way they counterbalance straight lines.

Yes, I’m playing now with a series of ladies inspired by the amazing women like Daniela Carboni. They have also simple lines and almost none reference point to fold. I follow a fold and then I see where it takes me. Where am I heading? I’m sure it not will be to complex models. 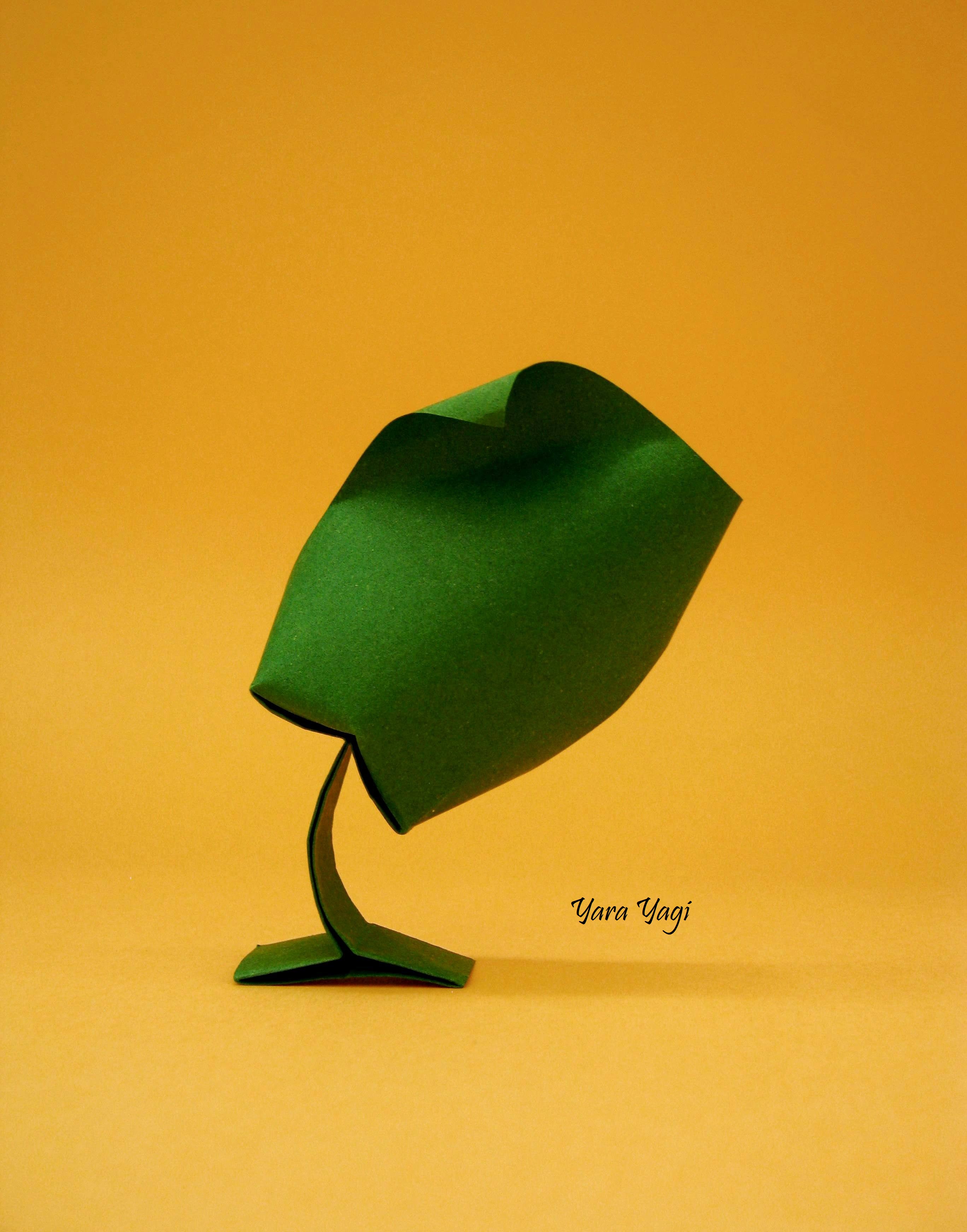 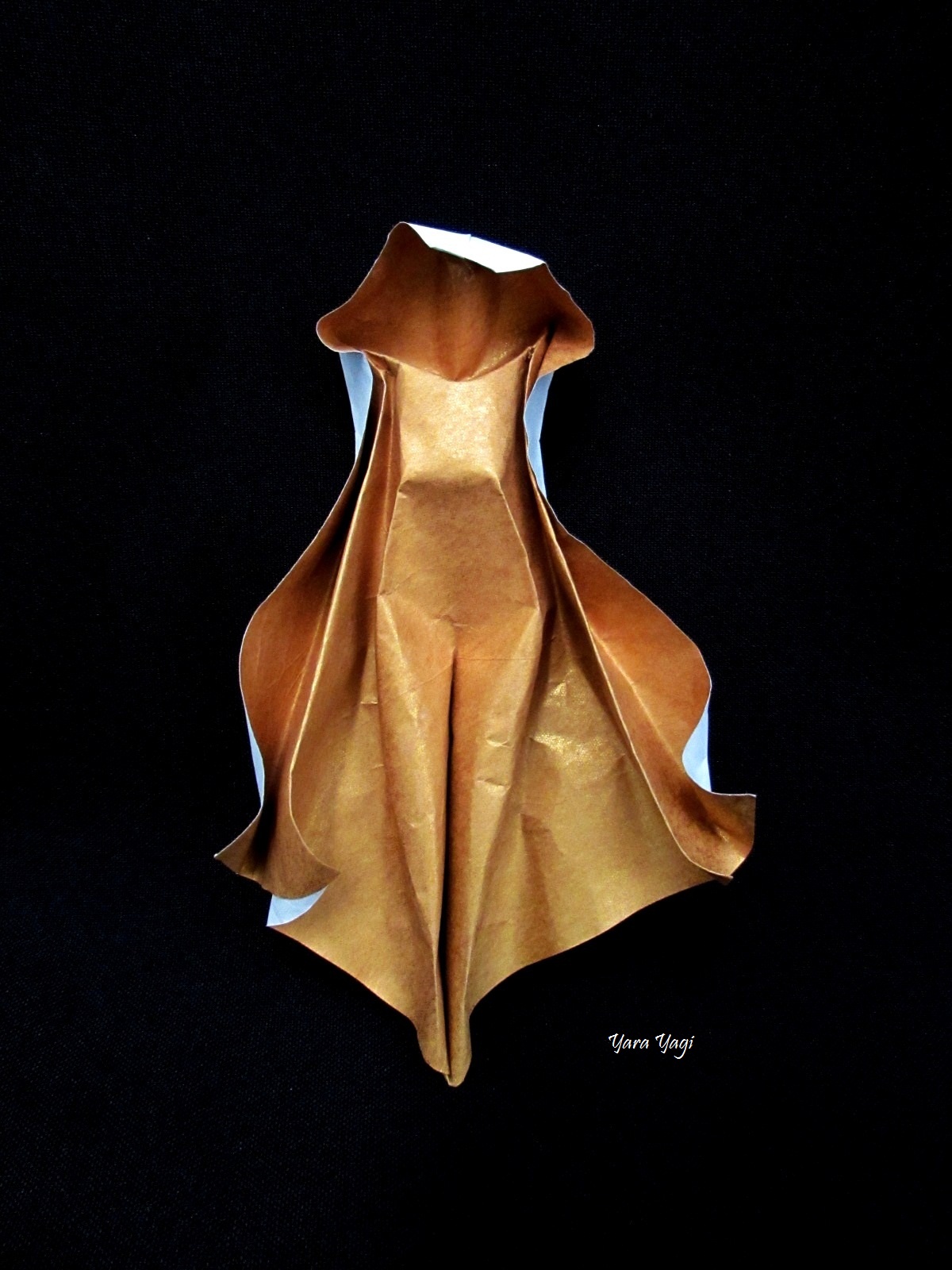 
Can you shed some light on your work process? Do you plan in advance, or doodle with the paper? Do you make sketches first? How long is the process? What type of designer are you? Your models are (mostly) simple in nature but highly sophisticated; how do you do it?

Yara: I always have a piece of paper around and I play with it all the time. Sometimes a model comes out, sometimes not. That works for me, despite everybody saying this is not the right way to create, that you have to have an idea in mind first of all.

With the ladies I started with a single line on the legs, and then it led me to the body, which in its turn led me to the mantle or to the wings. The process is fast, but I spend many days playing with variations on the theme.

I don’t know what type of designer I am because it is all new for me. I’m still finding out about origami. I’m lost in valleys and mountains…

Sophisticated… I think I just fold what I feel. Sometimes I feel like a rhino in a crystal shop.


What papers do you usually use? Why? Do you prepare them yourself? How do you decide what paper to choose? Do you try to match the paper to the topic of the work?

Yara: Well, the current economic situation in my country is not good, so we have to be creative.

For the test folds (of Halle’s diagrams) with many steps I usually use sandwich paper (tissue, kitchen foil, tissue) which I prepare myself. For the models with few steps I try to explore some variations: sandwich with crepe paper, foil, “papel camurça” (suede paper; it’s a kind of paper a little rough used by children in school works. The effect is similar to fur). For stars and flowers I use kami and “Color Plus” (I’m not sure, but I think it is the ordinary copy paper used in Europe and USA. It’s because the copy paper sold in Brazil has only five or six pastel colors). I also paint kraft, copy paper, cardboard with acrylics or gouache. It is like going back to childhood, and the result is interesting.

I think there is no “bad paper”. Each model requires a specific paper, and the folder has to know how to suit it to the model. The mermaid, for example, was folded with a kind of cardboard with 120 gr and dry. Many folders would consider it bad, but it suited that model very well. 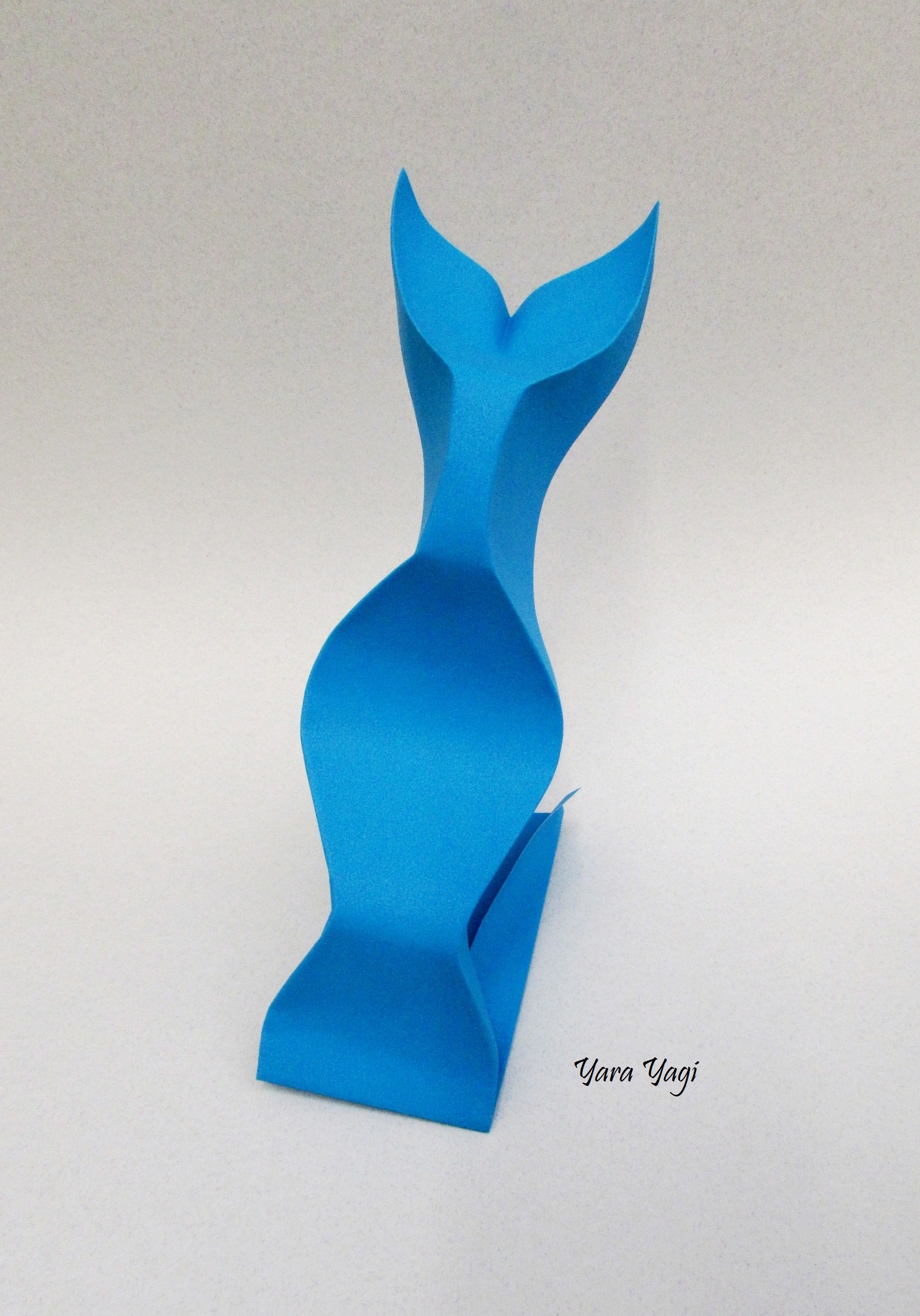 
Do you have a motto in your life? Is origami part of that motto? Is there a message in your art?


I am sure there is one model of yours that you would like to point out for us. Which one is it, and please tell us why you chose it?

Yara: I love flowers, and I have good memories of the garden in my grandma’s house. The garden was filled with azaleas, roses and snapdragons.

Three years ago I was playing with flowers made from a pentagon and it was impossible not to remember her sweetness and her lovely flowers.

The hollyhock made from a pentagon is my favorite one because its center is closed like a bud, but it can be opened as it would flourish. Leyla Torres made a beautiful video of it.


Is there one last question I should have asked? Ask yourself, but don’t answer. Just let us know what is the question …

Yara: “Do you accept a challenge? I think it is impossible that anyone can create a…”


Seeing that Yara`s declared profession is Paper Folder, I couldn't resist just another question: Can you tell me more about your profession – are you really making a living out of origami? Can you tell what you do? What were you doing before? How did you decide to change your profession?

Yara: Well, I worked in an office, then in our family’s paint store. After I graduated in Letters I began to teach Portuguese to teenagers. I love the profession, but that work was not for me… I admire and respect those who choose that profession because one must have patience, dedication and dynamism. After some years teaching at a school, I began teaching Italian language at home, in private lessons. Now I work with origami (or I try…). I make bouquets for brides, wedding favors, and origami for decoration… It’s not easy because people do not value paper work. Sometimes I have a good and big commission, sometimes not. But I love what I do and I’m very happy with origami! 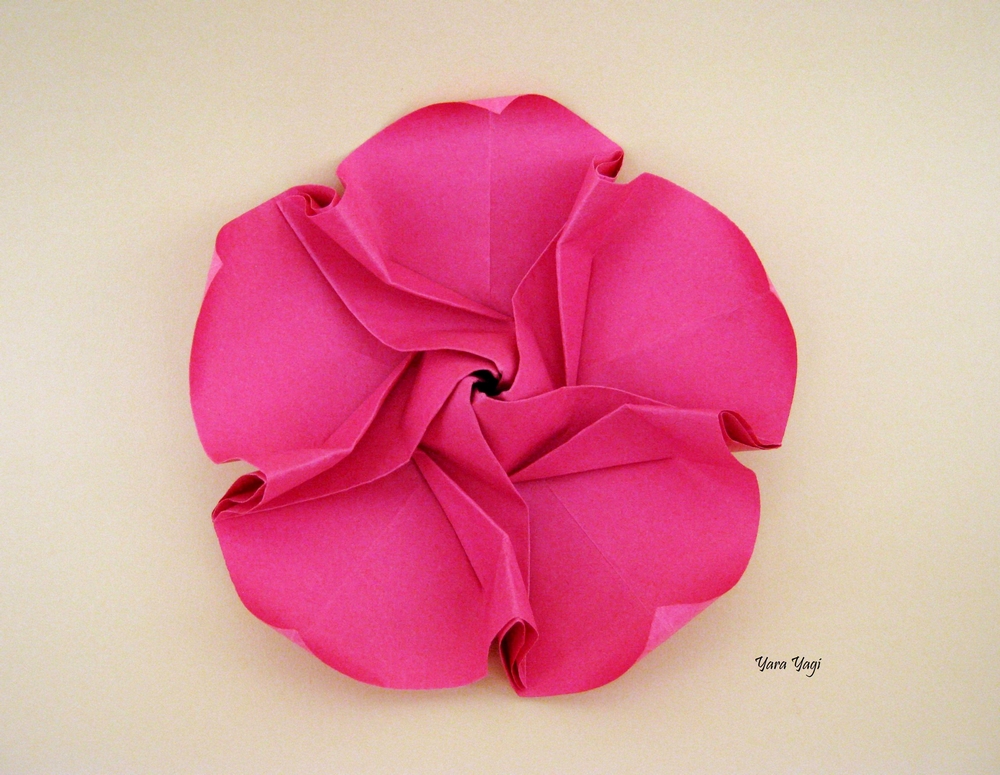 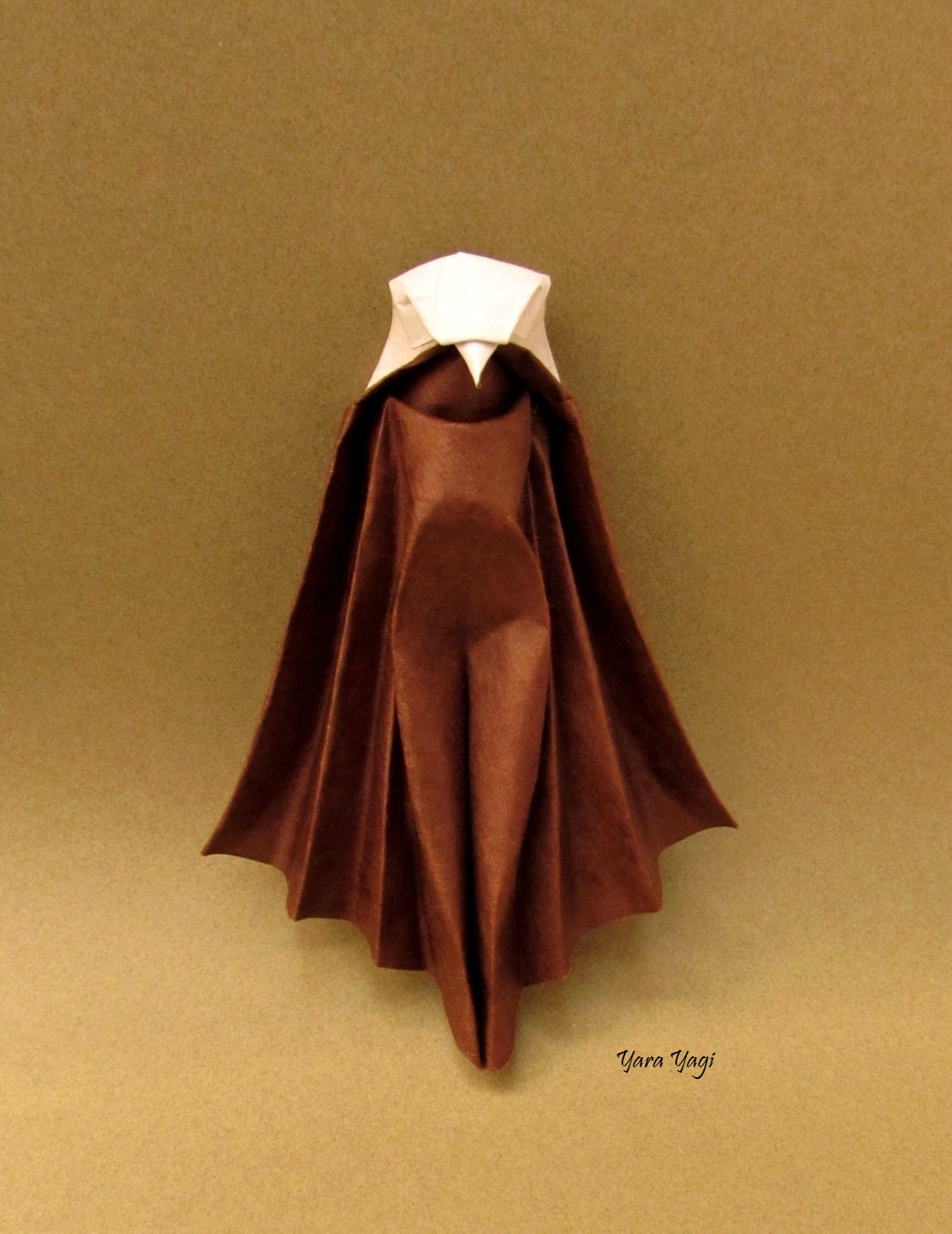 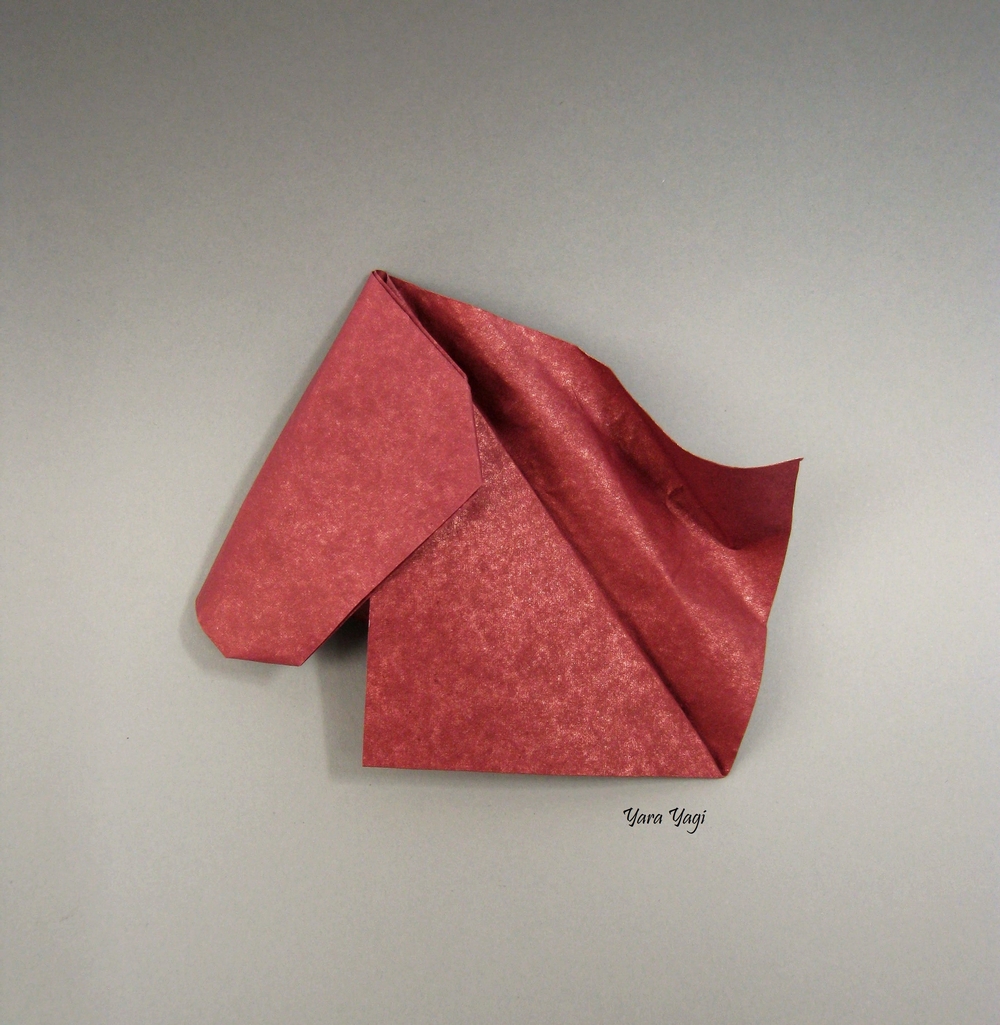 To really know a designer, you must fold her models. Here are the diagrams for the horse’s head.

Yara: I created this horse’s head for a challenge, and I made the diagrams on free hand using colored pencils. Both are very simple, as always. I folded it with sandwich paper. I hope you readers enjoy folding it!