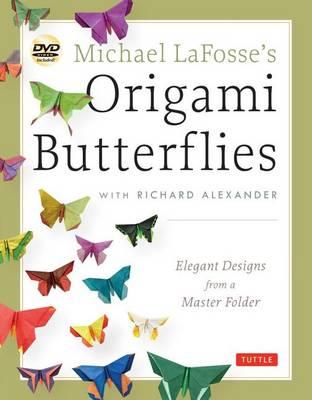 Perhaps the best sign of me really really liking a book is that I fall into a folding frenzy after having folded the first model from the book. Unfortunately, nowadays, I sometimes don't even find the time to fold that first model when I get a new book. But by a happy coincidence, Michael LaFosse's and Richard Alexander's new softcover book "Michael LaFosse's Origami Butterflies: Elegant Designs from a Master Folder" arrived at my doorstep shortly before Mother's Day. As a special treat to myself on that day, I decided to fold a model from the book.

You can probably guess what followed. It happened - the folding frenzy. Within a couple of days I folded over a dozen butterflies from the book. It meant less sleep than I need to stay sane, but one or two nights of that are okay. Anyone who's visited an origami convention can probably relate. And it was so immensely fun and energizing to fold those absolutely amazing butterflies. 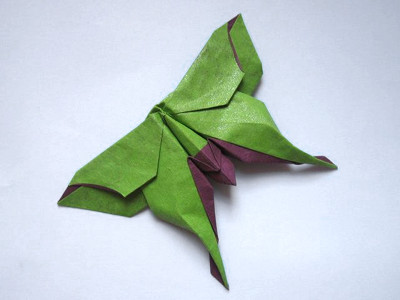 My first fold of Michael LaFosse's butterflies in 2007: the Mudarri Luna Moth from Origamido paper

It also reminded me of my first butterfly, or indeed moth, by Michael LaFosse that I folded. That was in September 2007 at my very first origami convention, the 40th BOS convention held in Cambridge. There are many things I remember fondly of that first convention experience. One of the highlights was definitely a workshop Anne LaVin held, teaching us how to wet-fold the Mudarri Luna Moth designed by Michael LaFosse. Back then she had also brought along some copies of a spiral-bound "Michael G. LaFosse's Origami Butterflies: A Field of Discovery Through a System of Design" by Richard Alexander and Greg Mudarri, which sold out in a breeze. I hadn't been keen enough back then to buy the book straight off, but did purchase it later. Strangely enough, though, I never fully explored it. I remember leafing through it, being intrigued by Michael LaFosse's butterfly system, yet it didn't get me folding. And I had plenty more time back then.

Differences between the old and new presentations

My previous experience stands in contrast to the busy folding I executed after buying the new book, "Michael LaFosse's Origami Butterflies: Elegant Designs from a Master Folder" by Richard Alexander and Michael LaFosse, which also presents Michael's butterflies. However, there are some main differences. Both books are about Michael's butterfly system, but of the 26 designs included in the new book, only six are also included in the old publication.1

The remaining 20 species require modifications of or extensions to the butterfly system, which were not presented previously. Plus, all diagrams - even those for the six already published butterflies - were redrawn by Michael LaFosse and Richard Alexander from scratch. These diagrams are much more accessible. Each step is clearer, but more importantly, each butterfly is presented autonomously. Let me explain what I mean by that.

In the old, spiral-bound book, different aspects of the butterfly – such as the wing ratios, color changes, head and abdomen shaping or details of the shaping of the wings – were presented separately. Each butterfly design was then described by referencing the different shaping details already presented. This made the modular approach of the design system more apparent, and I understand why Richard Alexander and Greg Mudarri chose to present the designs in this way. However, it makes simply folding a butterfly much harder. Flipping back and forth is more bothersome than simply following diagrams on the same page. The new presentation helps you stay in the flow of folding. Additionally, it's much easier to follow the diagrams – especially for beginners – when they don't have to reference previous pages. After all, such general instructions will not show the model exactly as it looks. Instead, you have to understand the concept and then apply it to a model that looks slightly different. An experienced origamist will not have great difficulty with this, but beginners are bound to struggle. This then may reduce the enjoyment someone gets from folding, or even lead to them giving up. Hence I am immensely pleased with this new presentation, which removes some of the shortcomings of the old presentation, while not removing any of the valuable content previously provided. 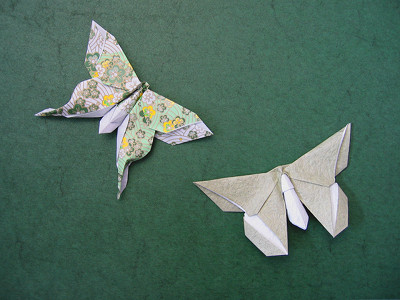 As a special extra, all designs are presented in video instructions on two DVDs. These instructional videos are of excellent quality, and a pure joy to watch. It is a privilege to watch such a master folder handle the paper and explain how the folding influences the final model. The fact that all designs are both presented in diagrams and video has special appeal. For one, it does not matter which medium you prefer – diagrams or video. But more importantly, to me this means it's also the perfect book for beginners. They can learn to read diagrams by watching a video and seeing how it translates into diagrams. Once they get the hang of it, they can try and simply fold from diagrams. And if they get stuck, they can always use the video to check how to perform the step correctly.

A book for everyone

This book lends itself well to folders of all levels – including but definitely not exclusively for beginners. The designs are beautiful, elegant, a total eye-catcher. Models that you are already in love with are always so nice to fold – especially when you can achieve results similar to the ones presented in the photos. This is so true for Michael LaFosse's butterflies. The designs require only quite basic folds, and can be completed within minutes. Minor inaccuracies don't necessarily take away from the model. This is a nice side effect of Michael's design system. Changing the ratio leads to different butterflies, so if you don't quite hit the landmarks, it's more like folding a variation that fits in the system.

Indeed, the model I've probably taught most to complete beginners is the Alexander Swallowtail Butterfly, for which an instructional video is also available online for free at http://www.pem.org/sites/origami/ (click "Fold more models!" and choose "Origami Now!", then go for the second video from the right). This video, by the way, is also a good example of the quality in which the videos that come with the book are produced in. 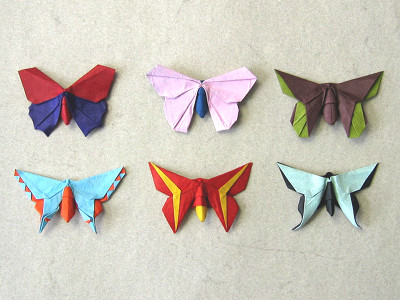 Various butterflies folded from 3.75in squares of double kozo, folded and photographed by Sara Adams

As for advanced folders – there is such beauty achieved when selecting just the right paper. It was a great privilege for me to fold my first butterfly from Origamido paper – something I perhaps didn't appreciate as much back in 2007 as I do now. But even back then I knew the paper was special, and even today I am struck by the beauty of the fold. It is also why I felt inspired to make a couple of paper sandwiches (gluing two sheets of kozo together to make duo-colored squares) when I went into my folding frenzy. After all, origami isn't just about folding, it's also about paper!

I will end this review, which was about so much more than just this book, with a definite call to action: buy, buy, buy! The first buy: for yourself; the second buy: for your origami friend; and the third buy: for that person you want to introduce to origami. All three will be a great investment with a return of much happiness, hours of pure enjoyment, and awe of the wonderful work by Michael LaFosse and Richard Alexander!

1This article was modified after publication. Initially I understated that The models themselves [presented in both books], I suppose, are generally speaking the same. To avoid misunderstanding I extended this to the point out that indeed the old and new publication only share six designs, and that the new publication includes previously unpublished extensions to Michael's butterfly system.