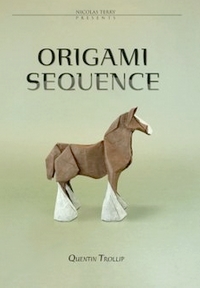 This is Quentin Trollip’s second book, the first being Quentin Trollip – Selected Works that was published in 2008 by the British Origami Society. If you have folded any of his models or had a chance to see them, you know he has a great eye for detail.

I do not own a copy of said BOS booklet and had only folded Trollip's manta ray and pig prior to my purchase of Origami Sequence. I bought the book in the first week of its release just to have the opportunity to fold the amazing Clydesdale horse that graces its front cover.

The book has 21 models in all, with the majority categorized as complex. Most of these models require the use of tissue foil and/or wet folding, which Trollip says will give you the best results. There are color photographs of all the finished models, with some shown from multiple angles. Furthermore, each of the designs has an accompanying crease pattern and a paragraph or two explaining the thoughts behind the folds. I have a lot of favorites in the book and to tell you honestly, I spent a couple of days just deciding which of the models to try first!

I have folded the white rhino with Tant paper and was more than satisfied with it. Most recently, I attempted the orangutan, and found it to be a challenging model with two Elias stretches and two sinks – one each of the open and closed variety.

The models in Origami Sequence require folders to use sheets of paper measuring 35 cm or more. Trollip recommends that models like the great white shark and the bald eagle look best with 50 cm paper. Many of the models also take advantage of color changing, and this looks awesome on the bald eagle and the springbok, which when folded and shaped in the suggested pose, practically looks like it’s springing along on the terrain. The African elephant in the book has a unique fold – the trunk curving upwards – to depict a ‘trumpeting elephant’ pose, complete with a huge pair of tusks, color changed to white. The only lower intermediate model in the book is the Scream! mask, which is a lot easier to fold than the others.

As with all other books published through Nicolas Terry, Origami Sequence contains a secret code which, when found, unlocks new diagrams and things of that sort. I still haven’t put on my thinking cap for this one, but I do know someone out there has already cracked it!

Origami Sequence is a great book for those who have experience in folding intermediate to complex models.