My favorite model at the exhibition,
designed and folded by Takashi Toyomura


The Combination of 6OSME and Tanteidan was irresistible. Add my love of Japanese cuisine and snacks; the good experience from April and you will understand why I am back in Japan just four months later.
I stayed at Toyoko Inn, just one subway station from the venue, with Beth Johnson, Tom Hull, Brian Chan, all from the USA, Jorge Pardo from Spain and Winnie Leung, from "just one hour difference" Australia. Toyoko Inn is a reasonably-priced hotel that supplies all basic needs. Breakfast is included, although there are mainly Japanese dishes, with only a cake or bun that had some western resemblance. There are only four round tables that can hardly host four people. Still, every evening, we all met there, chatting, folding and preparing for the coming day.


You may say this is a weird opening for a convention report, and you are right, but first things first - I met Hideo Komatsu San, got his autograph, and showed him my little exhibition. His book, for me, is The Best Origami Book Ever, with some wonderful maneuvers, such as un-sink, brilliant folding sequences and clear diagrams; all, of course, are just the background to his models. And I had to tell all that to him, and so I did.


2nd in the world


With 500 participants, this is probably the second largest convention in the world. As such, everything must be pre arranged and planned. We had to ask for exhibition spaces before the convention, and each got a random number for class registrations for the two days of folding.
The first day, Friday, was for registration, two talks from the guests of honor and some procedural explanations. It was done in a huge auditorium at Toyo University, and as such, it had many rows and columns of tables, four chairs per table, all facing the big board and screens. This will be our main folding hall.


This day started at 13:30 and by 16:00 we were heading back to the hotel, with a bag full of 15 cm kami, some examples of the beautiful Japanese papers (35 cm), a 3-color pen, a badge, and name stickers.
Saturday morning was exhibition time. It took place in another, near by, auditorium, with the same four-chairs-in-line tables, covered with black table cloth. Each exhibitor was handed a note stating his name and number of spaces (as he asked in advance). The left side was dedicated for that day's models to-be-taught, and some space was dedicated to a silent auction consisting of some books, booklets, models, papers and souvenirs, all concerning origami, of course. Each had a sheet of paper for one's name and price. It's a first for me to see this and I loved this idea; later, at the final day of the convention, there were three more valuable and unique items, that were sold in a loud auction, so we could also witness the thrill in that.
After that, there was time to choose my classes. With only four time slots, I picked a Ranunculus by Ishikawa Manabu, and Cessna, by Jason Ku. Since each was a double class, that was it for me at that day. If you ever attended a convention so crowded, you may know already how it is done, but for me it was a first. I had to wait for my number (153, stated on my name tag) to be called, stand in line, present my requests, and hope for the best. Luckily, I got all the classes I wanted!

The Cessna model was taught in a way I never experienced in a convention. Jason Ku handed us the diagrams, eight pages, and there you go, just fold it in your own time. If you get stuck, raise your hand and Jason will pop up to help. Indeed, in any other way this class should have last for three hours, so I was glad to finish in about 45 minutes and moved on.
At six PM, the folding sessions were over, and we headed for the reception; the main event of the convention. it was located in the next building, 16th floor, with a great view of the city at night. This reception was undoubtedly the highlight of the day. Food was spread on the tables, hot and delicious, Japanese cuisine at its best; small groups of people mingled leisurely, talking and enjoying the view and food. At some point, dinner turned to a presentation of skills, by a bangi player, a tenor and a yo yo master. And then, it was Bingo Time! I never won a single game of bingo, and even if I had won, I would have pulled the wrong string. Prizes were kept in bags, tied with a loooooong string, held all together, and I would surely pick one of the small, humorous gifts, missing the Lego box or the digital Blood Pressure gauge. The evening was not finished without celebrating 70 years for Yamaguchi-San, the engine behind all of this. He got a huge greeting card made by Patty Grodner, with many wishes and multi language signatures!
At half past eight it was time to head back to the hotel, to this little lobby, which became our main hall for the night folding sessions. Yes, the tables were small and the lobby was dimly lit, but do we need more than that to enjoy the company of fellow folders? 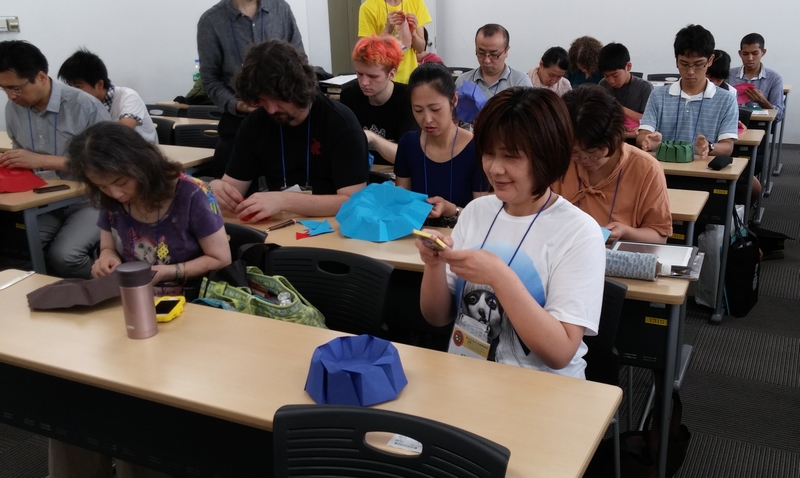 Students are my best teachers.


Sunday was the last day of the convention. Usually, for a three day convention I will ask to give four or five classes, but this time I wanted to relax a bit. I signed up to teach only three. As things happened, all three were scheduled for Sunday. This left me with only one class to attend as a student. But not to worry, because the best things you learn are coming from your students. I gave a class about the fourteen variations on a cube tessellation, just to enjoy the fifteen created before my eyes - combining a small cube on a larger one. The Japanese folders are amazing! The level is high, their foldings are immaculate and they are quick to understand and to follow. Every foreign instructor had a Japanese translator, so all could understand him.


It may be a good time to talk about the staff. With yellow, visible, shirts more than 40 volunteers helped to make this convention happen and proceed smoothly. Some are students, some are workers from Origami House, all together they directed, translated, managed and even served drinks at the reception.
Soon, it was all over. We all gathered at the main hall, exhibitions already dismantled. the loud auction was followed by the result of the design competition (with, strangely enough, no winners, as the level was not high enough), many words of thanks to the staff members, and farewell and goodbye to all of us. At six PM sharp, the lights went out! 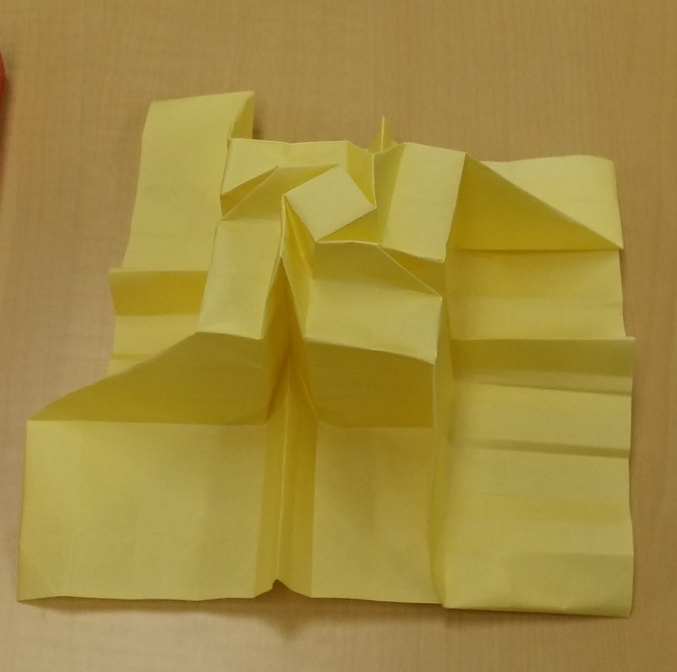 Cube on a Cube, designed and folded by Unknown creator,
during my class, about the 14 (now 15) variations on a Cube tessellation


Japan works by other rules: politeness, discipline, order, following time table and plans to the letter. Every person has his/her position, status and work to be done correctly; when you are a part of the staff, and have duties to attend, you cannot sign your diagrams in a book. It is not the time for private conversations or deeds. With 400 Japanese folders, hosting one hundred foreign guests, it must be that way to make it work.
One cannot judge a convention by the numbers of models one is taught. It is more about the people we meet and interact with; who see your exhibition or beat you in the race for five-numbers-in-a-row. Tanteidan brings all the top level American and Japanese folders to the same place. What else can we ask for?


All images courtesy of Ilan Garibi.

Hi - Check that 3-color pen - it might actually be 4-color, as the clip is often the black color switch! I just returned this week from a trip to Japan and bought some of those famous, made-in-japan pens, at Tokyu Hands huge crafts/hobbie/variety store in Shibuya, Tokyo for my grandkids. Wish I had bought more actually! - bernadette benz