Once Upon a Time in Versailles: Part 2

Modification 2: More Releasing. The Same Way of Folding, but Another Division α/β/γ of the Right Angle

So far so good. We should follow the wind. Let’s look at step 2 of our construction of the Versailles module:

Do we really need a bisection? What happens if we replace this step with:

While in the case of bisection (or folding a line to a line) the angles β and γ are the same, now we will experiment with other divisions. Actually we may replace steps 1 and 2 with:

Again, the construction is always possible, and the module may be flattened.

Modification 2. An example of the crease pattern and a flattened module based on the 18.9/18.9/52.2 division of the right angle (Versailles: Knight).

Our family of modules has increased significantly, and now we can parametrize a module with two parameters ? and β.

Here you can see how the module looks if you change the angles ? and β. (See Geogebra notebook.) 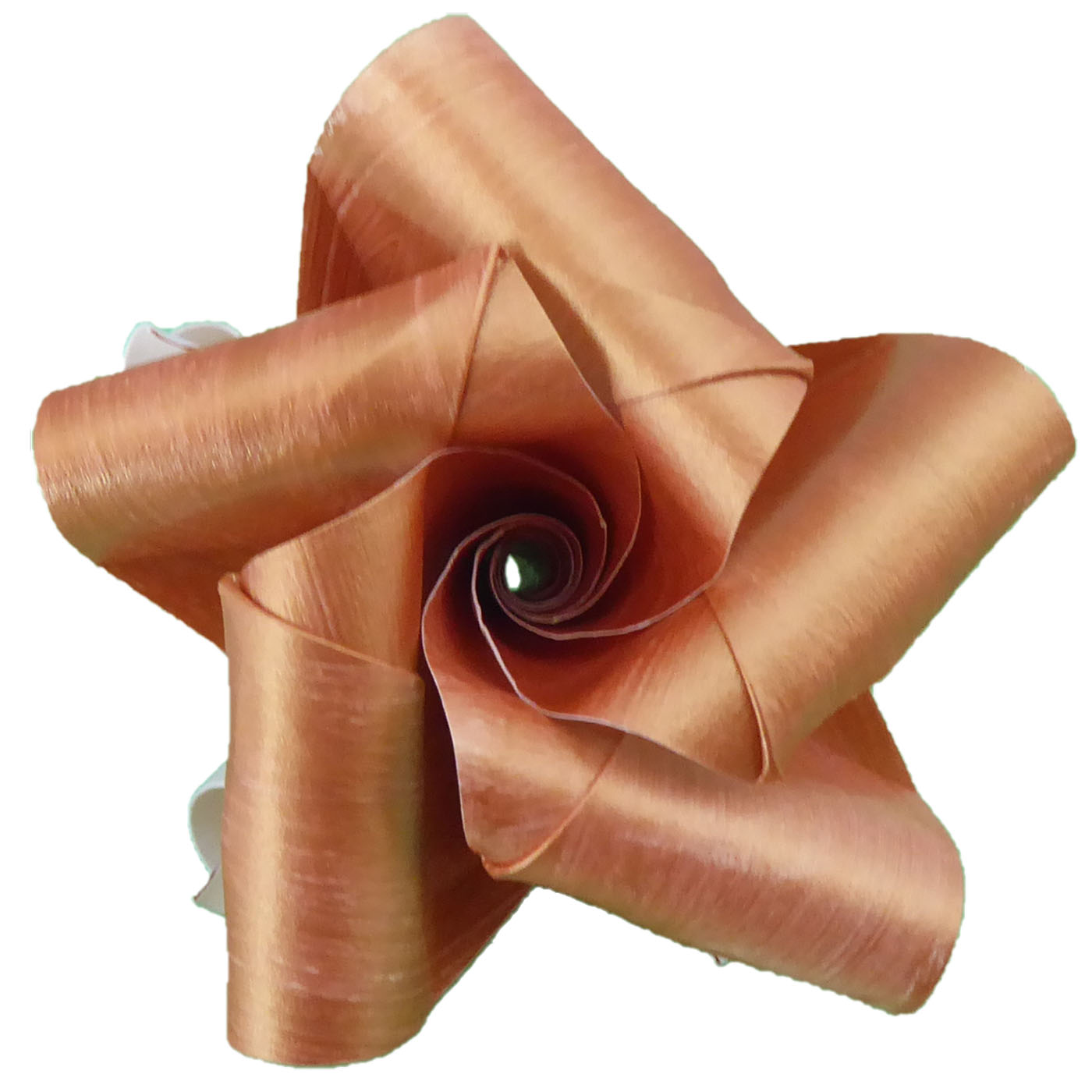 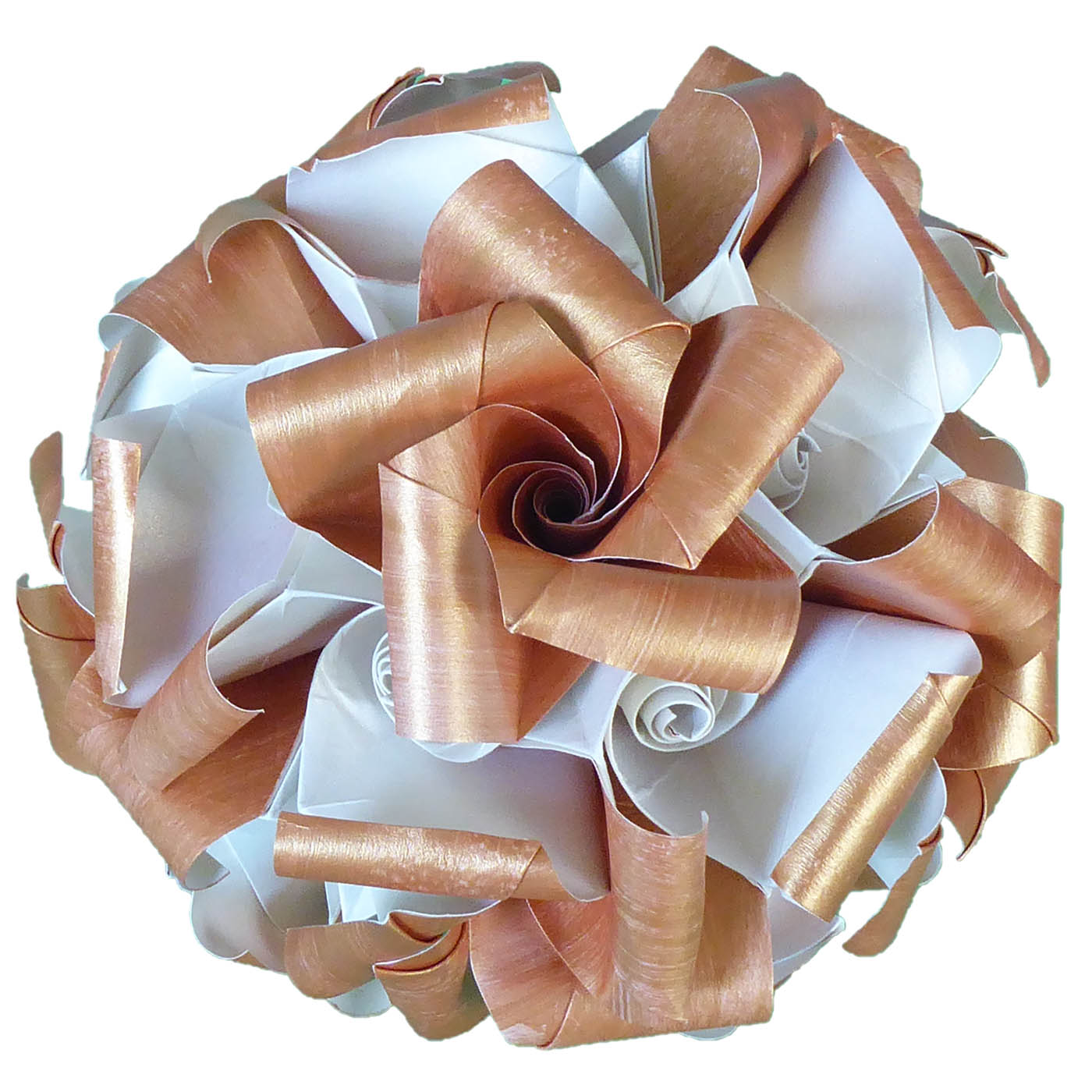 For complete diagrams of Versailles: Knight, see the PDF.

Modification 3: The Next Step. Replacing the Bisector at D With an Arbitrary Division

We may experiment with another division of the right angle at point D.

The original construction divides the right angle at D into two equal angles ? = ?′ = 45°. Now we try to divide the angle into two arbitrary angles ? and ?′ (? + ?′ = 90°). But life is not so easy. If the angles α and β are small (point X is located low), and the angle ? is large (the line dividing the angle is located high), the intersection point Y is located off the paper, and we cannot continue our folding process. Also, when point Y lies on the paper but too high relative to point X, we can perform the next step, but the crease pattern is not flat-foldable.

Three possible cases: (i) point Y off the paper; (ii) point Y on the paper, but the “rabbit ear” is not flat-foldable; (iii) the Versailles construction is possible.

In this case, the generalization is a little bit unexpected as the fold line must lie between side AD and line DX to satisfy the flat-foldability constraints:

Now we have extended our family of possible Versailles modules into three parameters ?, ? and ?, however there are constraints on ?.

Here, you can see how the module looks if you change the angles. (See Geogebra notebook.) 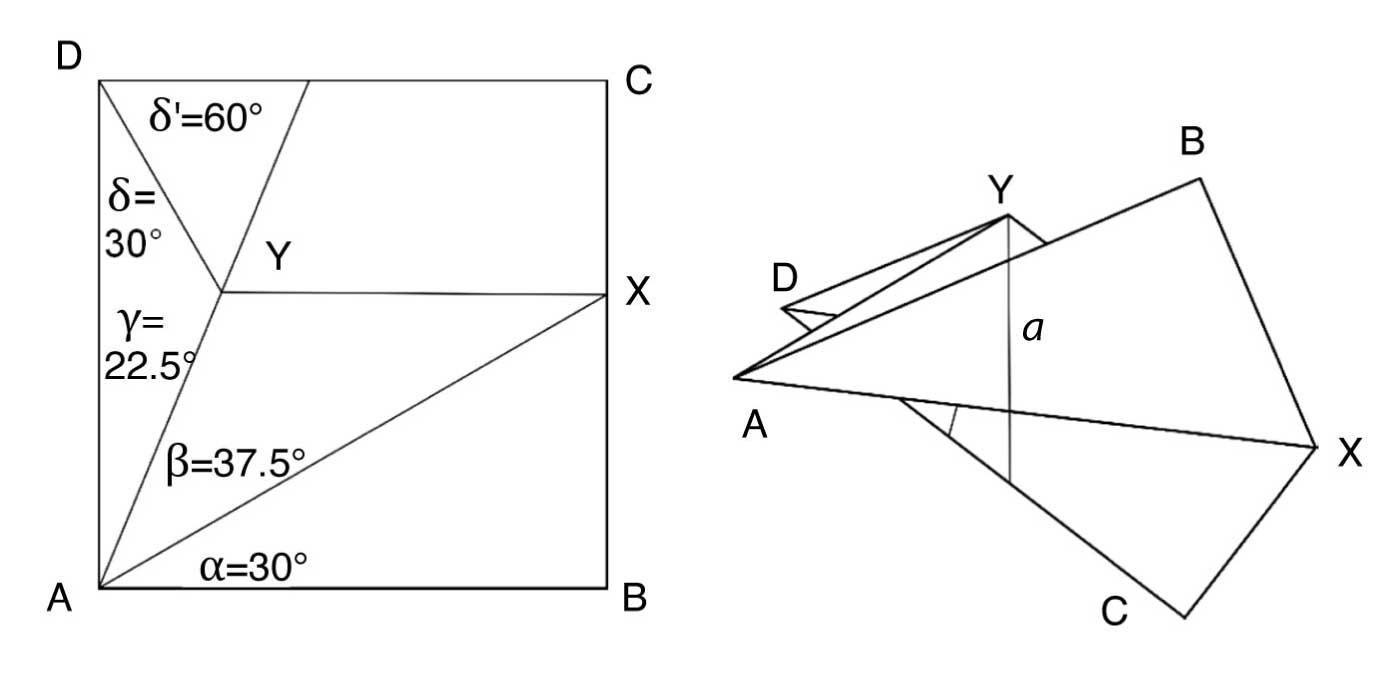 Modification 3: An example of the crease pattern and a flattened module based on the 30/37.5/22.5 division of the right angle at A and a 30/60 division at D (Versailles: Emperor). 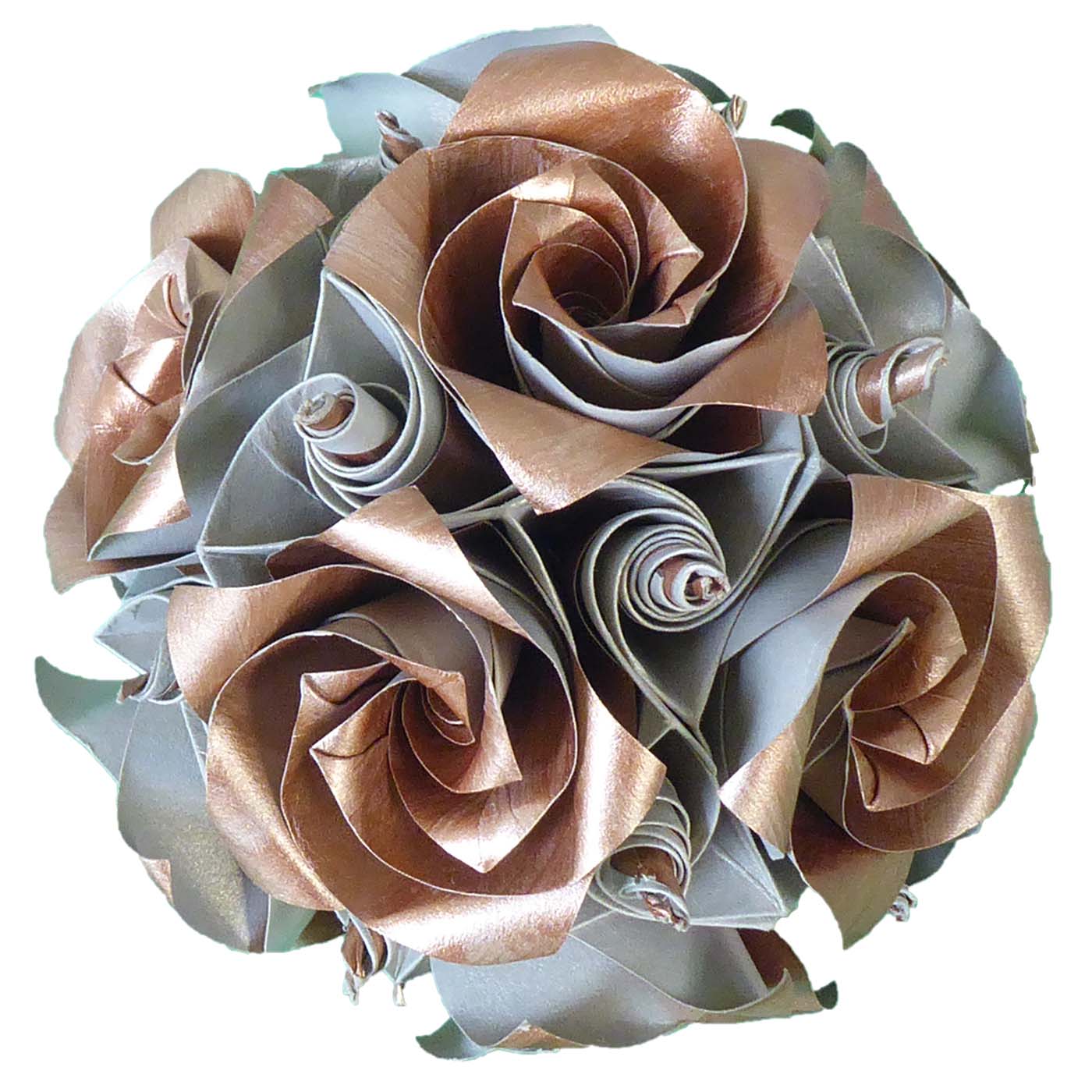 For complete diagrams of Versailles: Emperor, see the PDF.

The following table summarize the development of the Versailles module.


Looks like we have already used all possible angles to parametrize our construction and there are no more possibilities to release constraints on the construction. Really?

Modification 4: The Same Way of Folding, Another Starting Angle to Divide

Let’s go back to step 1 of our construction. We would like to divide an angle into three angles. And all four angles of a square are the same. So we have only one possible start to our construction. It’s obvious, isn’t it?

Actually, it is not. Why? It is not easy to say until we can see the solution. After that it is obvious.

The family of Versailles is constantly growing. Now we have four parameters: angles α, β, and δ as well as the location of the vertex P of the angle α.

Here you can see how the module looks if you change the parameters. (See Geogebra notebook.)

Modification 4. An example of the crease pattern for a module and a flat module (Twelve Roses for My Mum). 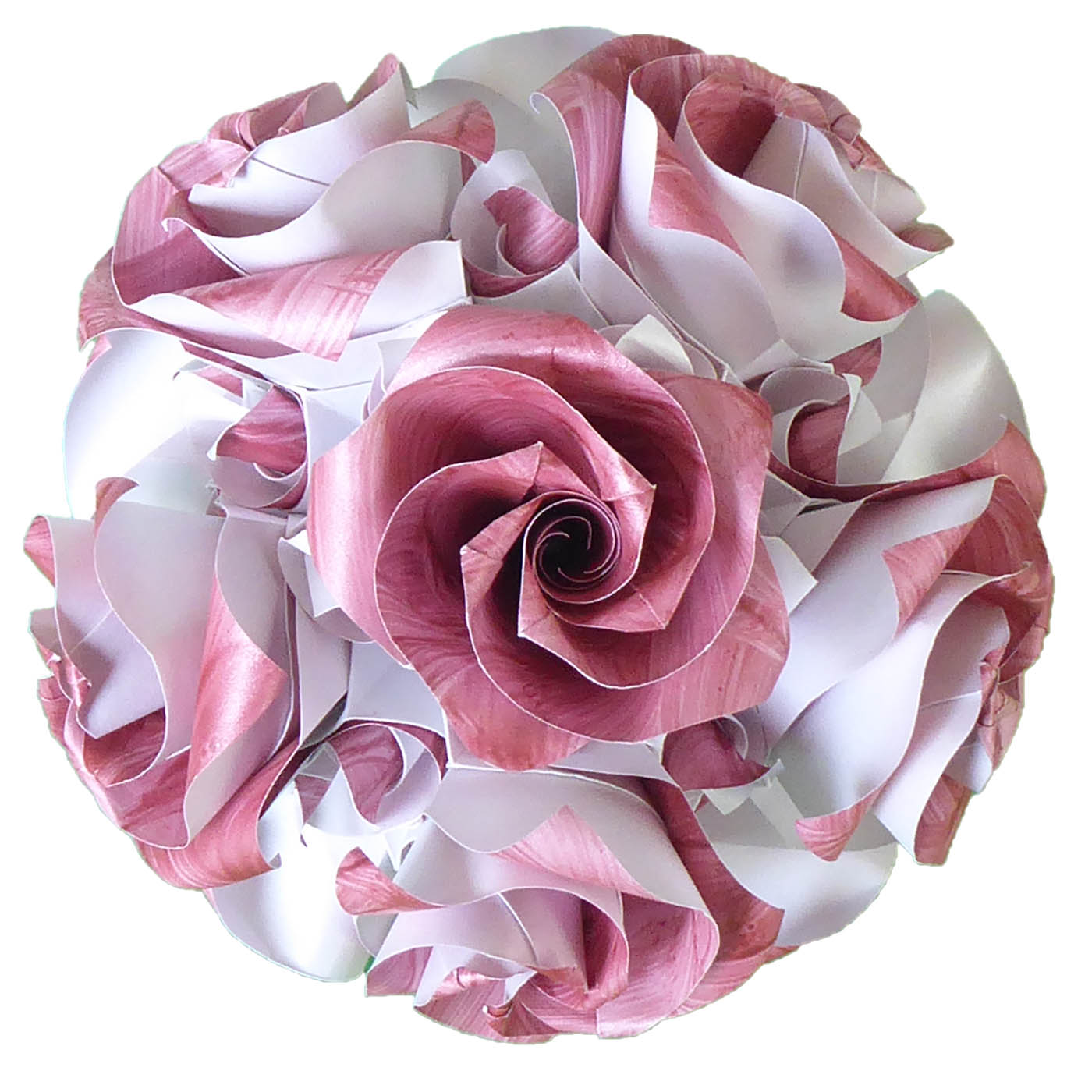 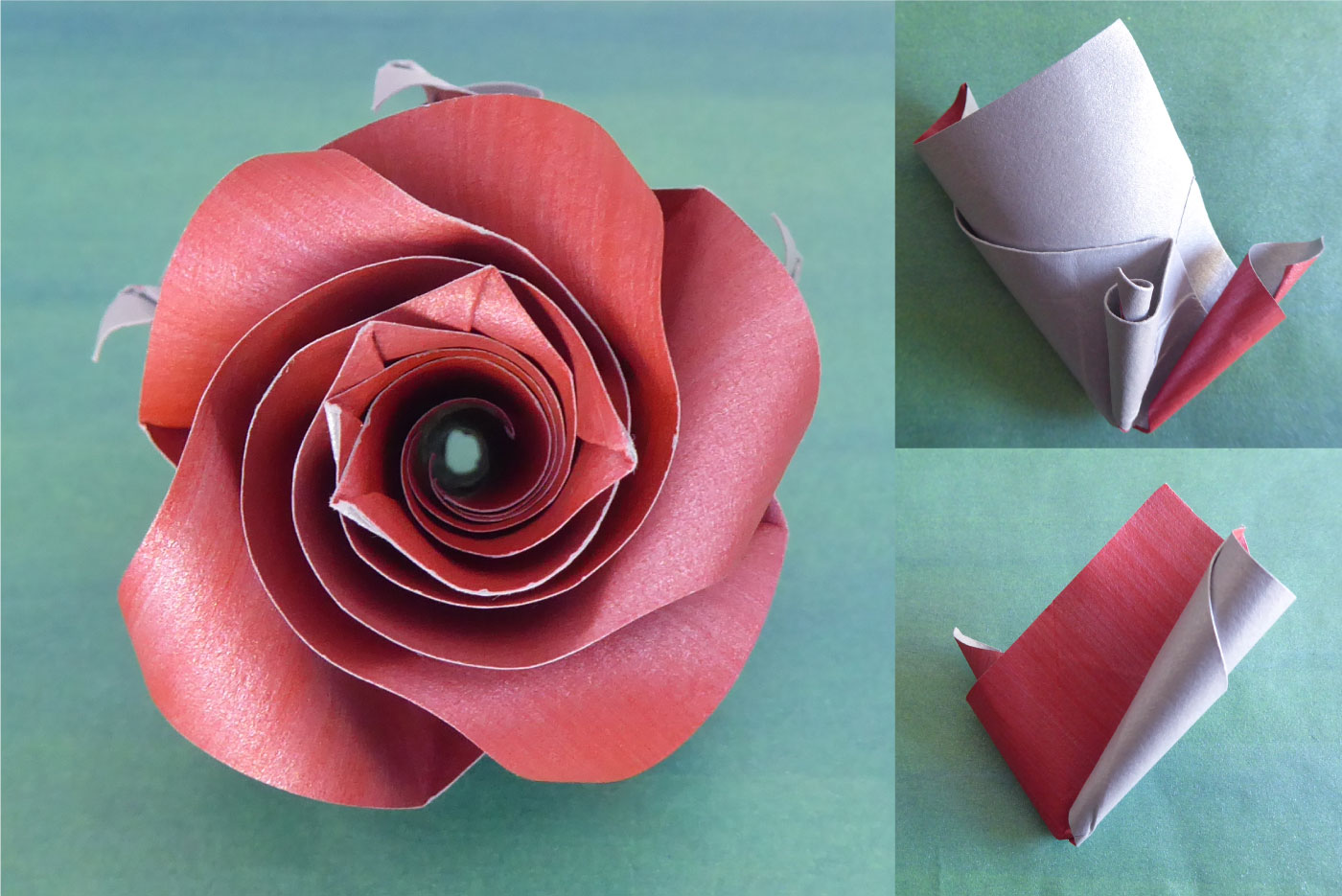 The diagrams were published in The Fold 60. 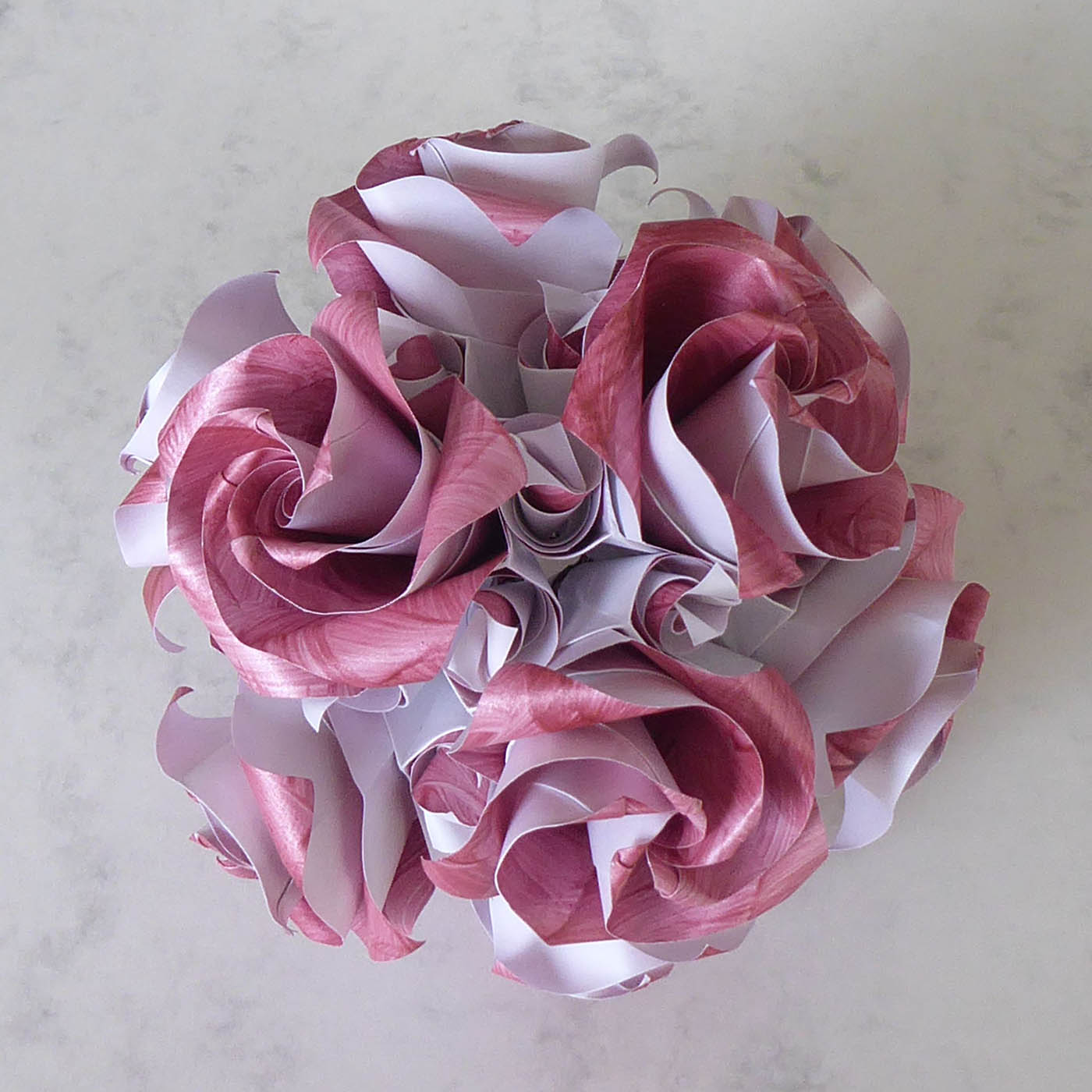 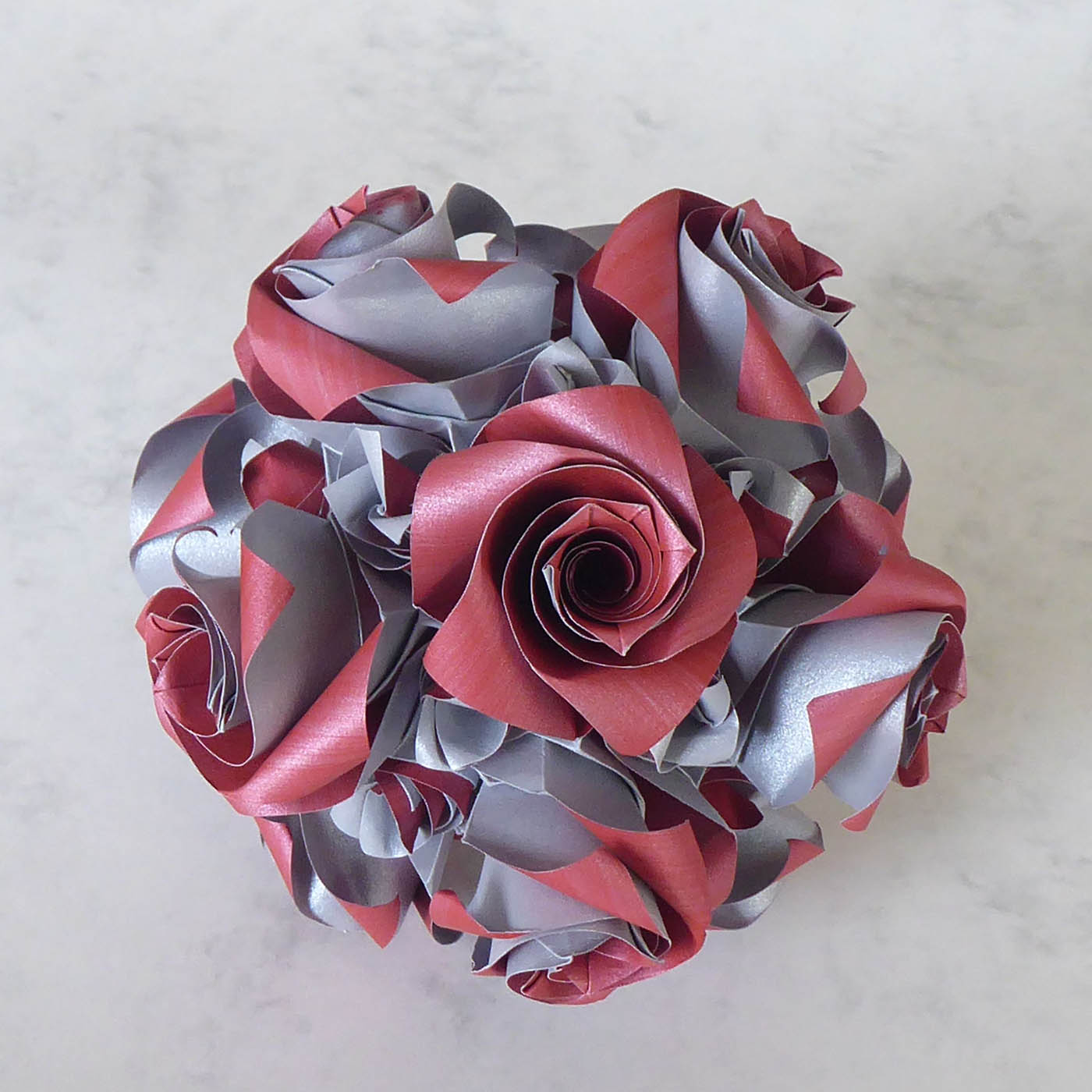 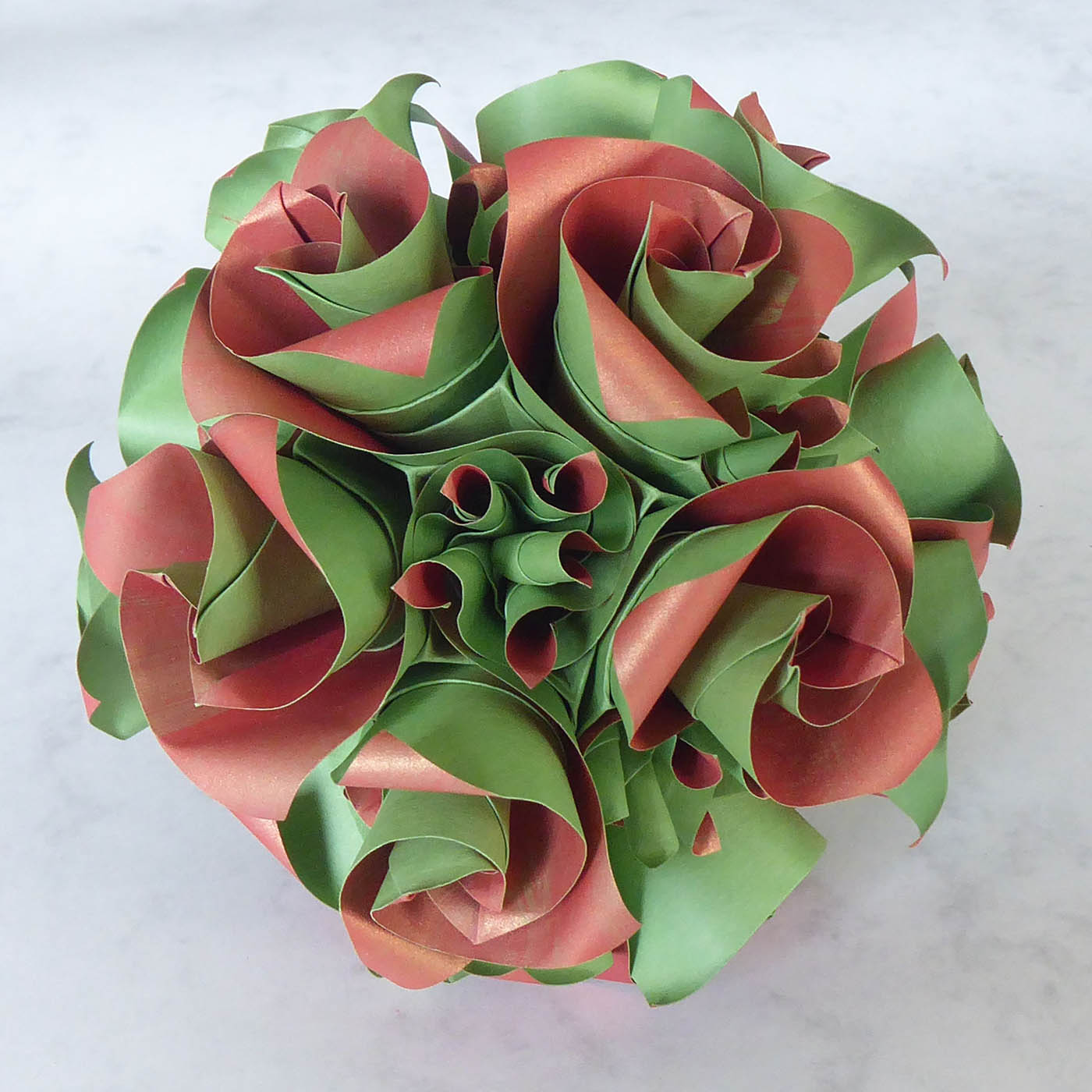 Modification 5. The Same Way of Folding, but Another Paper Shape

Let’s go back to the beginning of our construction. We must dive into the depths of psychoanalysis to find assumptions hidden in our subconsciouses. It is so obvious that the paper is always square that we do not even notice the fact. But do we really need a square sheet of paper? What happens if we start from another shape? Actually, nothing happens and we are able to follow our instructions successfully to complete the module.

Modification 5. Examples of the crease patterns for the Versailles module starting from sheets of different shapes.

Here you can see how the module looks if you change the shape of the initial sheet of paper as well as other parameters. (See Geogebra notebook.) 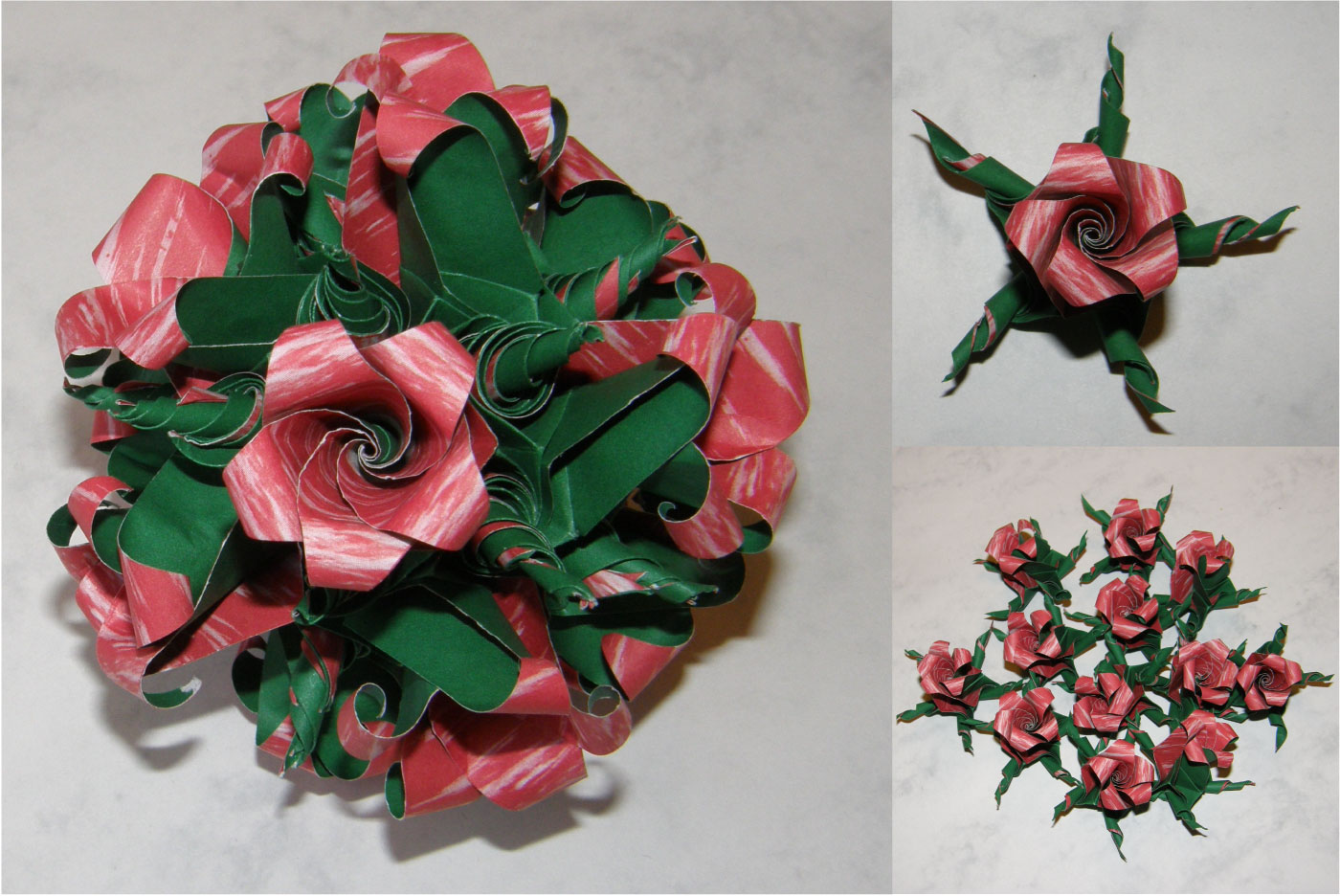 Meadow (K11008), 2011. The final work, the pentagonal flower (a macro-module), a complete set of the macro-modules before the assembly.

For Meadow diagrams, see the PDF.

More examples of Versailles works designed as described above: 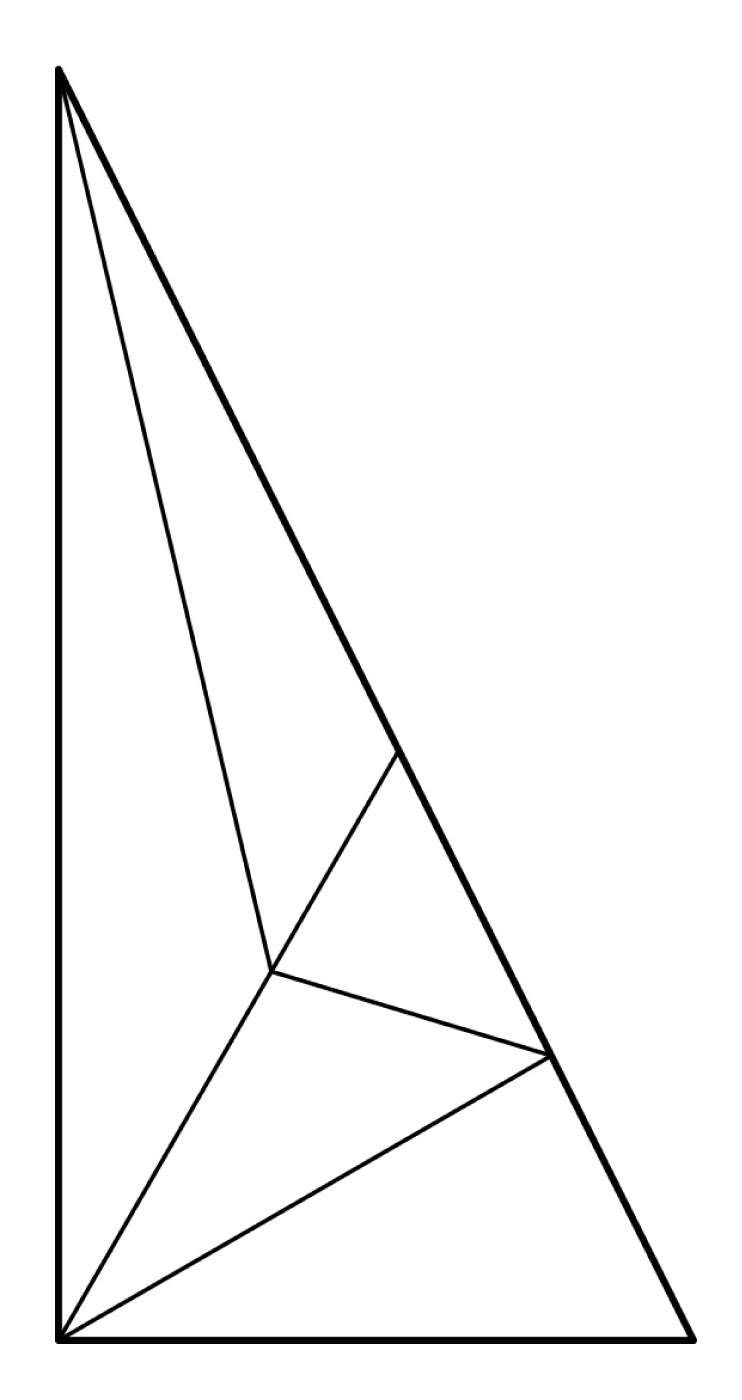 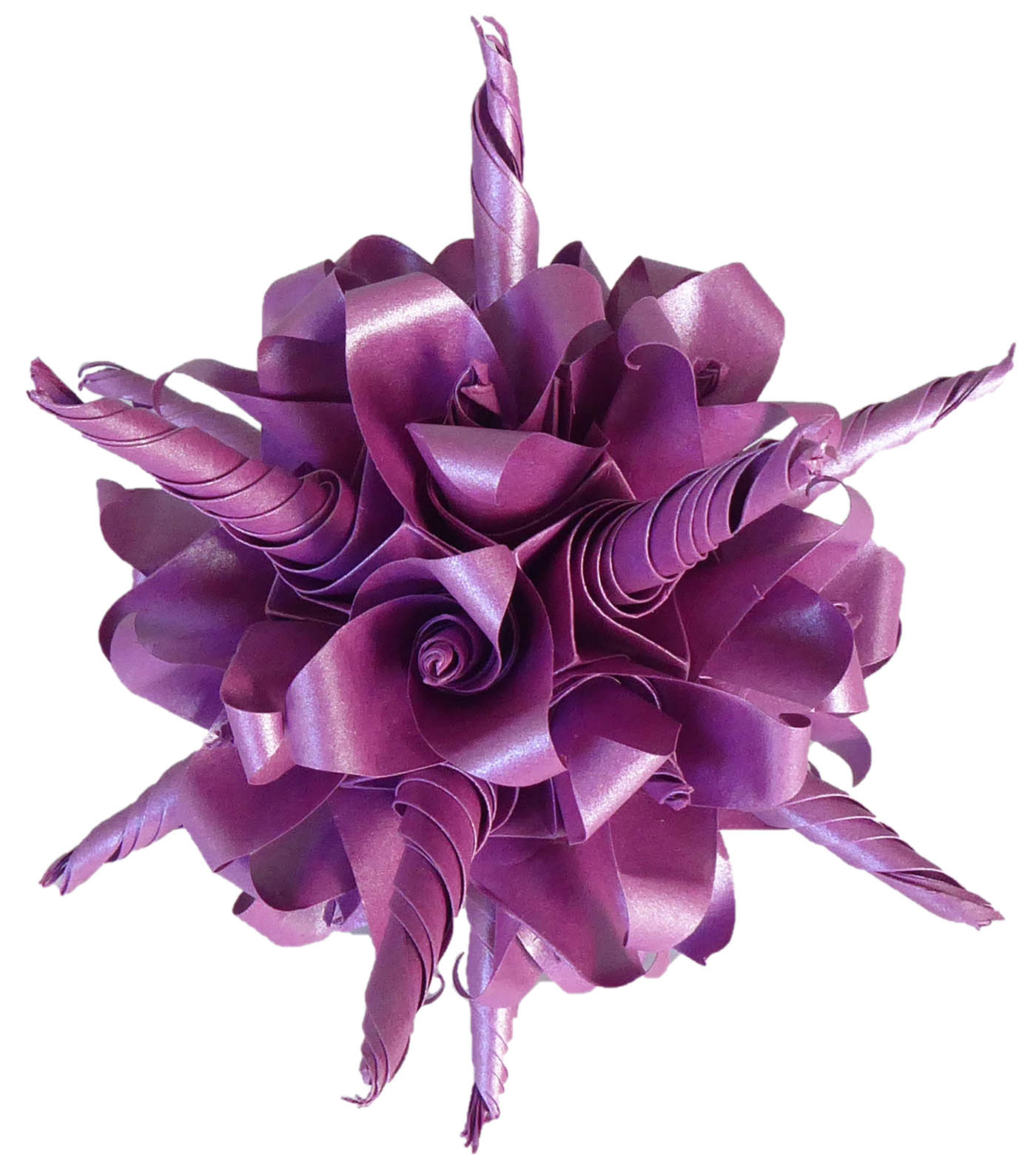 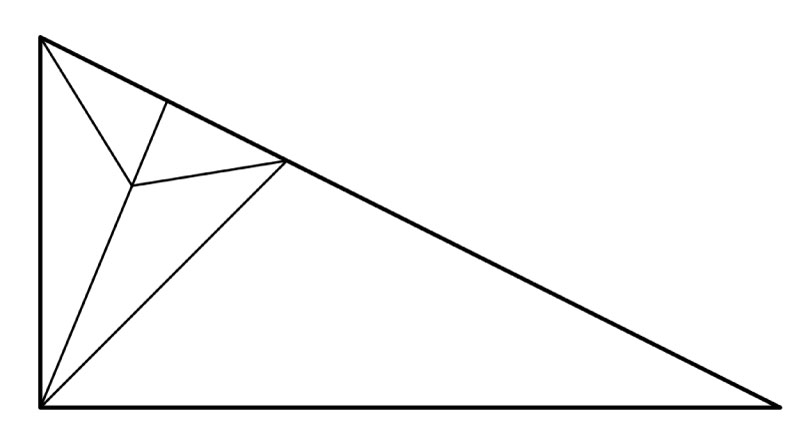 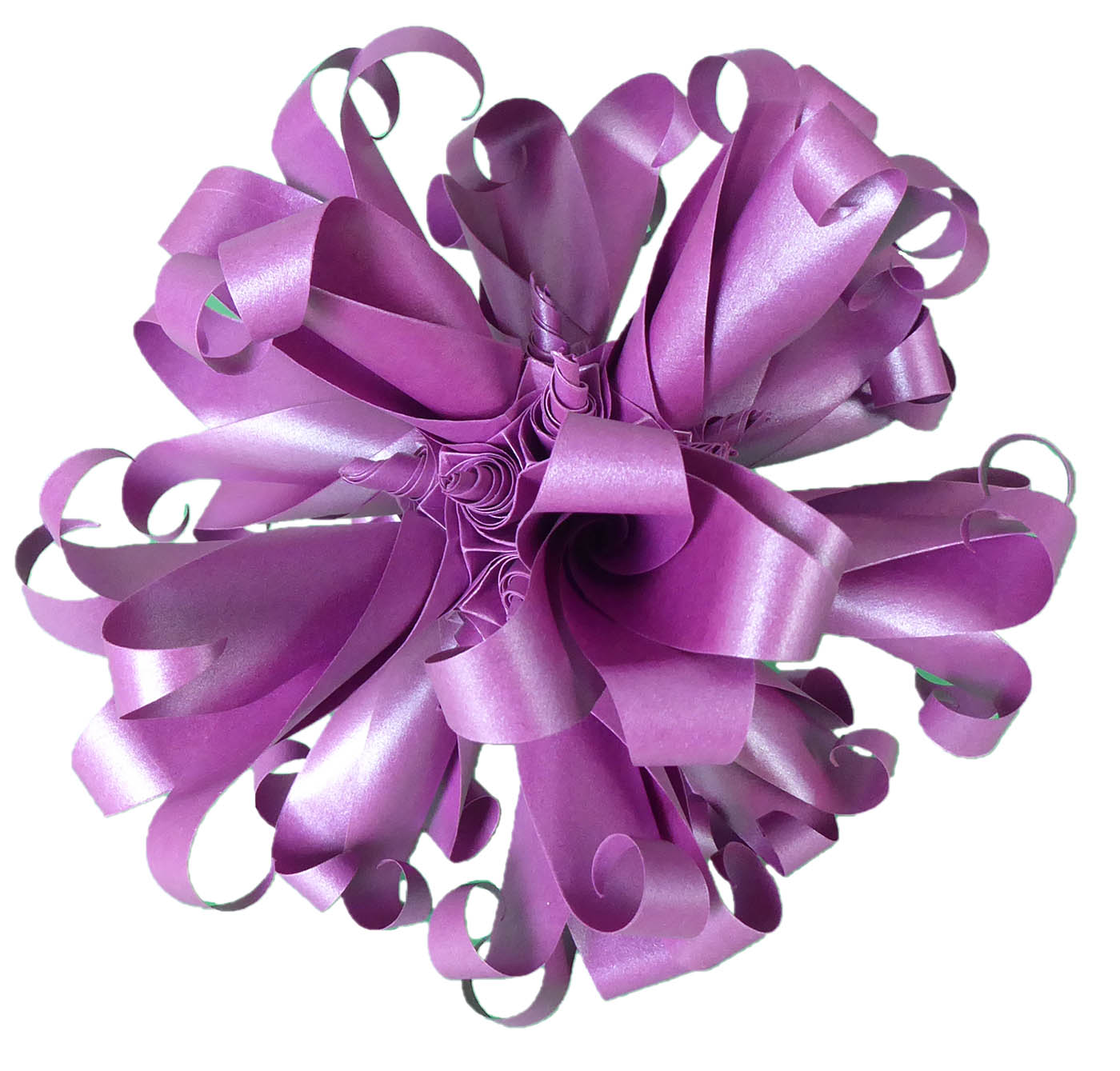 Modification 6. Another Position of the Lines

Let’s recap our construction, taking into account the modifications we have discovered so far.

What we actually do in steps 2 through 4 is to construct point Y and three lines starting at that point, three lines that form a “rabbit ear” in step 5. But why are we focused so much on the points P, D and X? Actually, the lines may end at other points. We must observe that the lines do not enter the petal part of the sheet (as many layers do not look good when twisted, especially at the end of a spiral), and all the angles around the point Y are smaller than 180° (the condition for the flat-foldability of the “rabbit ear”).

We may rewrite our construction in a way that may be strange for origami but which opens new horizons:

Examples of crease patterns for the modification 6.

Here you can see how the module looks if you change the shape of the initial sheet of paper as well as other parameters. (See Geogebra notebook.) 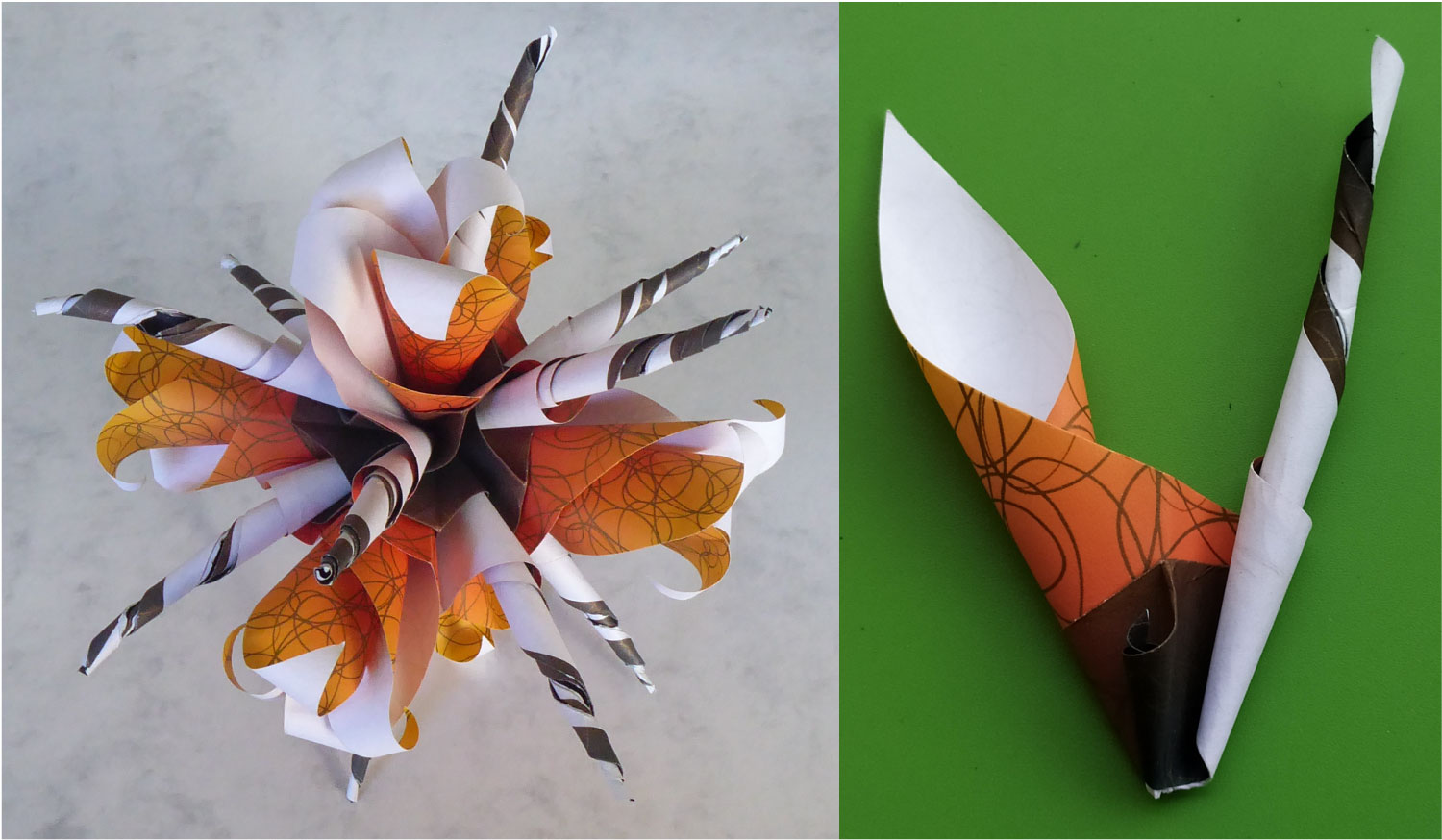 For diagrams of Versailles: Fine, see the PDF.

We have departed from rigorous geometric construction. Along the way, we discovered boundaries that are possible to remove. And each removal blossomed into a bunch of new possibilities, some of them converted into a specific work, and most of them left for the future, for other artists or perhaps never to be exploited. Now we have reached a place where there are no reference points, while the spirit or essence of the original construction is still preserved.

And our original rigid geometric construction has evolved into something flexible, and only partially defined, that may be described as:

Wait, wait … Modular origami is about nice clean geometric constructions, not about “somewhere” or “choose the shape.” Such messy steps are reserved for figurative origami, aren’t they?

As you can see, actually, they are not. Free-folding style may also be used in modular origami. If you are still not convinced, look at the work Versailles in Free Style: Chaos. The work consists of 60 modules folded in free style, each module is different from the others (yes, one more parameter – the shape of modules). And it is unique, impossible to recreate or copy. 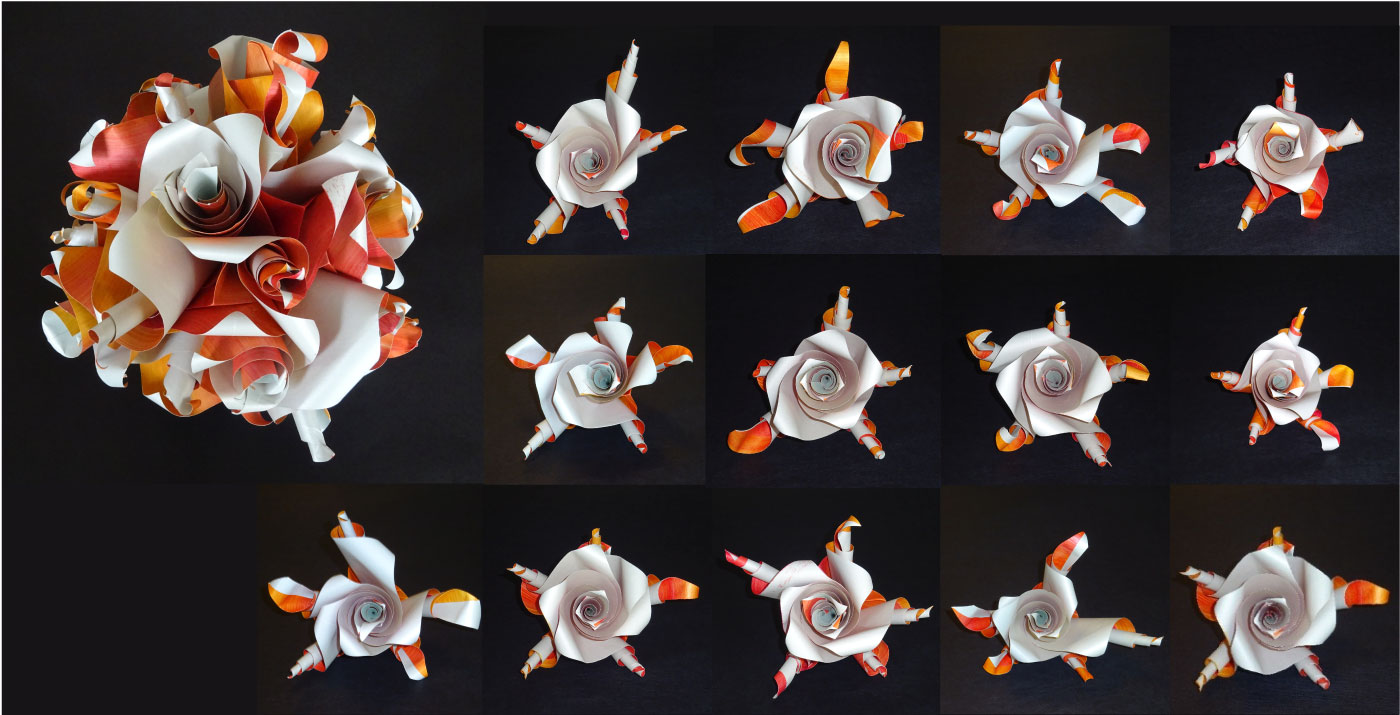 If you managed to read to this point, you definitely deserve a prize. In the picture above there are 13 pentagonal flowers while the final work needs only 12. Answer these two simple questions:

Send the answer to woj.burczyk [at] gmail.com together with a link to a photo of your work through Nov. 12, 2021, and you will receive a free Versailles diagram not downloadable in this article — two diagrams if you also send comments from your test-folding of any of the diagrams linked to this article.
— Krystyna Burczyk

We started with a rigorous geometric construction. The analysis of this construction led us through the subsequent degrees of releasing the constraints and revealed the essence of the idea. Each step resulted in interesting works with unforeseen features and visual values. At the end of the road, we got a very loose idea of a construction allowing for creative freedom.

Now, when (almost) everything is possible, it is time for artistic activity – to choose from the infinite number of possibilities, those that gain the intended visual effect or convey specific emotions. Each work will be unique – origami is no longer the production of fully replicable objects, but like other genres of art gives a one-of-a-kind result.

The design that was a promising starting point, after being generalized, became a tool, one of many in a creative toolbox, a tool waiting to be used to achieve the intended artistic effect. It is no longer a dictator who unequivocally determines the final result.

The design strategy described here created a family of similar but different works. However, it represents only a small portion of Krystyna’s designs. and is only one of many tools she uses to create new models.
— Wojtek Burczyk