Once Upon a Time in Versailles: Part 1

Editor’s note: “Once Upon a Time …” explains Krystyna Burczyk’s creative process and the mathematics underlying her modules. It also includes links to diagrams for seven models. The article is lengthy, so I divided it into two parts to speed loading time. You will find a link to Part 2 at the end of this article.

In this article you may find … Hm! It depends on what you would like to find.

It may be just a family of interesting (we hope) modulars based on the same principle but each different from the next. Frequently with Krystyna’s designs, an idea is explored, and it produces a family of works.

Or it may be a history of a design journey that starts from a specific, well-defined folding sequence, goes thought the land of parametric folding (where specific folds are defined by a freely chosen parameter like a position of the end point or an angle of inclination of a crease line) and after several bends finishes with freestyle folding, without specific, well-defined reference points. You may encounter such free-folding quite frequently in the case of figurative origami, but modular origami has so far been a fortress defending itself against such attempts.

Or at a higher level, you may find a design methodology we call “pushing the limits.” When we analyze a specific design, built-in constraints (frequently unconscious) are discovered. Releasing such constraints raises the limit of a specific design and allows us to discover new interesting designs.

Once Upon a Time in Versailles …

I’m really keen on geometrical origami. I like geometrical structures, symmetry and the simplicity of mathematical constructions. But …

In October 2010, my husband and I visited the Palace of Versailles. There we saw artworks made by the Japanese artist Takashi Murakami. We were shocked by the vulgar materials he used for his works as well as the clash of the kitsch of the palace of Louis XIV, dripping with gold, and the kitsch of the bright, “plastic” colors of the exhibited works. I couldn’t find mathematics behind these works; they just looked like a random packing of round plastic flowers. 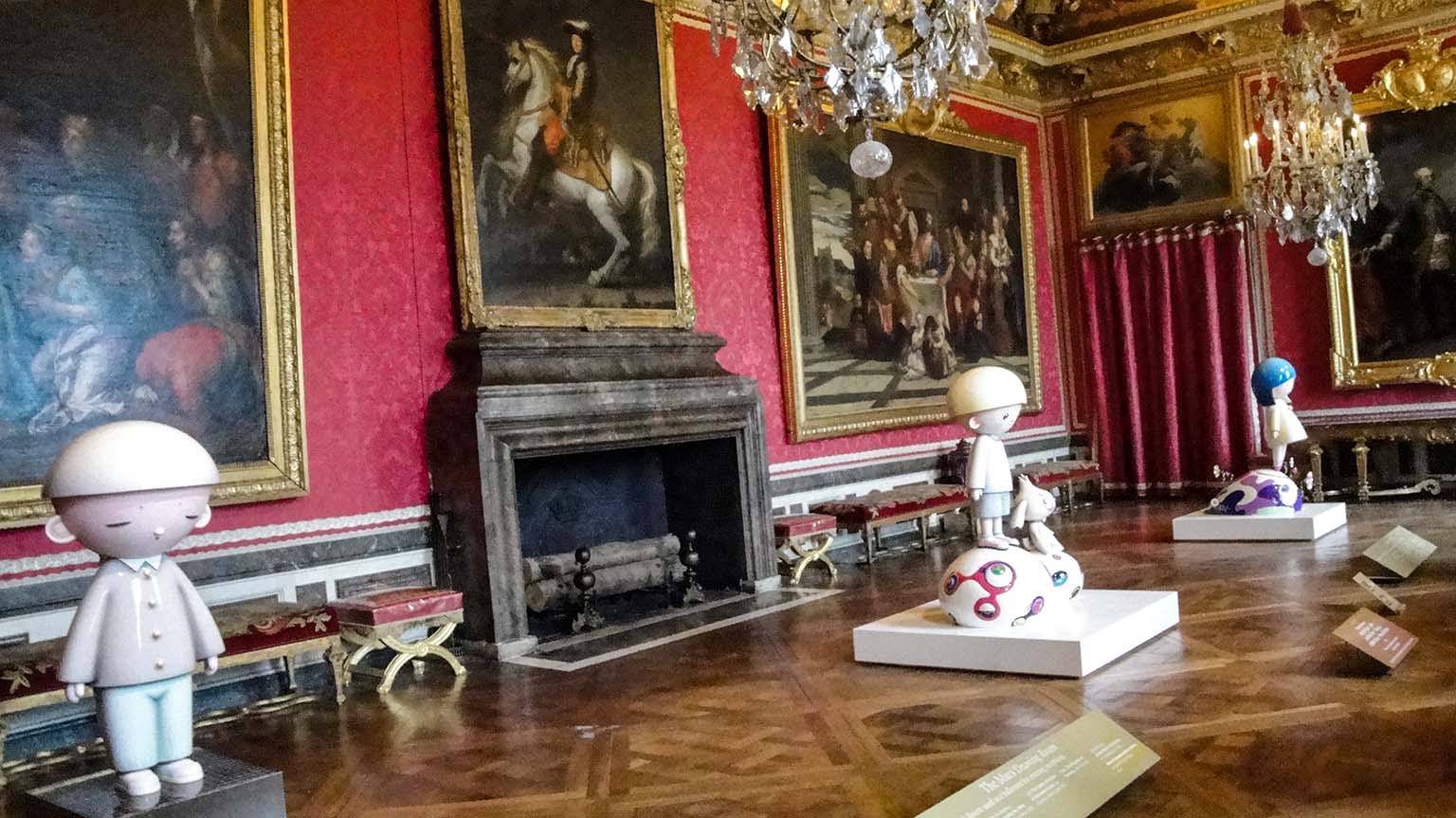 Since then, I have asked myself: If such things are art and can be exhibited in Versailles, why can’t origami? And I started to think about origami works in a new context:

Inspired by the exhibition, I wanted to create something that was:

To achieve this goal, I started to consider how to combine two contrary ideas:

At that time, I already had experience with spirals as a means of joining modules as an alternative to the widely used flap-and-pocket system. Spirals were proposed as a way to join modules by Herman van Goubergen. He proposed three systems to join modules based on paper tension in 2000. One of them was his Curler Unit (Herman van Goubergen, “Curler unit,” British Origami 205 (2000): 17-18, https://britishorigami.info/academic/mathematics/curler-units/. We saw it for the first time in 2000 at the 2nd Scandinavian Origami Meeting. Wojtek “discovered” the curler model at Herman’s exhibition table and learned this new technique directly from the master. A few months later, he convinced me to try this technique, and I started to create modulars using spirals, which I named Twirls. Spirals allow for a juncture tolerant of distance and angle. As opposed to flap-and-pocket connections, the angles and distance between modules do not need to be constructed exactly. The flexibility of a paper spiral allows some tolerance both in terms of the angle between modules and the distance between them. But initially, I had been convinced that my twirl modules had to contain some basic features of the waterbomb base with twisted flaps proposed by Herman van Goubergen, namely the mirror and rotational symmetry before twisting and the rotational symmetry after twisting.

Visiting the Murakami exhibition gave rise to an idea to make something contrary to these basic features. And the Versailles module was born.

Instead of starting from folding in half along the diagonals and the medians and creating four lines equally distributed around the center of the paper (as in the waterbomb base), I decided to use the construction of the 60° angle and to start from the trisection of the 90° angle at the corner of the paper. The folding process of the module may be briefly described in the following steps: Construction of the Versailles module.

A finished module and its schematic representation with three different twisted flaps.

But what could I do with so weird and irregular a module, when polyhedral structures exhibit so much symmetry? I had already developed the macro-module approach (combining several modules to make a larger one) in my earlier works (see my book Twirl Kusudamas 1, [2008]). A few modules are joined together to form a macro-module that has more symmetry and corresponds to a regular polygon in a polyhedron. I still thought that a vortex formed by spirals must contain the same spirals to maintain the stability of the final form. As the module does not have rotational symmetry, the mirror reflection of the crease pattern results in a different module (twisting is still the same).

Two chiral forms (left and right) of the Versailles module.

My first Versailles model used macro-modules of six modules (three left modules and three right modules), with the longest spiral going to the central vortex and smaller spirals joining at the periphery, a short with a short one and a medium with a medium one. Use of two chiral forms was obvious to me, because at that time I thought it was necessary to keep vortexes uniform (only one type of spiral in a vortex).

The macro-module corresponds to a hexagon, and I used the structure of the truncated octahedron to form a model. Assembly of four macro-modules. Only spirals of the same type are joined together.

In a similar way, five left modules and five right modules give a decagonal macro-module (ten modules) that is used to form a kusudama based on the truncated dodecahedron. The result was astonishing. The long spirals gave the organic feeling of a flower sticking out from a ball formed by smaller spirals. Finally, I had obtained a real kusudama – a ball of flowers.

For detailed diagrams of the Versailles kusudama 8 x 6 With Holes, see the PDF.

How to Join the Versailles Modules

Initially, I thought that a vortex must be homogeneous (built from one type of spiral only) to be stable. In fact, the spiral system is more flexible than I had expected and allows for different sizes of spirals to be joined together. When I noticed that “same modules in the same vortex” was a constraint that could be lifted, the family of Versailles designs increased immediately. I could make macro-modules with an odd number of modules (for instance pentagons), and more structures became available to use as a base for a Versailles kusudama. The different orientation of modules also increased the number of possible models. And I realized that a macro-module could be not only a building block for a kusudama but also a stand-alone model. An Artist Does Not Make Errors, an Artist Creates

The wrong position of a module in the hand while twisting is a common error made by participants in my workshops. But an artist does not make errors. An artist creates.

The Versailles module twisted upside-down has a different appearance that enlarges the range of possible models. Again, the module is nonsymmetrical, and a different orientation of the module yields different flowers, and, of course, new kusudamas. From the left: the arrangement of the module; a pentagonal flower (a macro-module); Versailles: On the Contrary (K18059), 2018.

For detailed diagrams of Versailles: On the Contrary, see the PDF.

Structure of a Module

The module has three different spirals (denoted 1, 2, 3). Spiral 1 (the longest one) has a large petal flap.

We have already seen different possibilities arising from the structure (orientation of modules when joined, an underlying polyhedron structure). Now we will look more carefully into the folding sequence. There are new possibilities hidden there.

Modification 1: Releasing the Constraints. The Same Way of Folding, but Another First Angle α

When we go away from the details of folding sequence and describe the folding process as a geometric construction, we can easily notice that the construction may be easily modified. We may reformulate step 1 into:

Then the fold line divides the initial square into a triangle and a trapezoid (a quadrilateral with two parallel sides) or two triangles. The area below the line is a triangle ABX (as in the base construction) if ? < 45°. When the first fold is the diagonal (? = 45°), the square is divided into two triangles, the unfolded one becomes a petal and the other triangle is folded into a rabbit ear. When ? > 45°, the unfolded part forms a trapezoidal sail and the remaining part is a triangle folded into a rabbit ear. But the last case is another story that we will tell separately in the future. Independent of the location of point X, we may continue our construction and find a line a (the pivot axis) that allows the module to be folded flat. So … we have an infinite numbers of different Versailles modules. A module is described by the parameter ?.

Here, you can see how the module looks if you change the angle. (See Geogebra notebook.) The animation is done in Geogebra, an interactive geometry system used widely in math teaching (available for free at www.geogebra.org).

Modification 1. An example of the crease pattern and a flattened module based on the angle ? = 15° and the 15/37.5/37.5 division of the right angle (Mallows at Midnight Shadow). For complete diagrams of Mallows at Midnight Shadows and Mallows at Daylight, see the PDF.