OrigamiUSA, the Portland Oregon Paper Shapers, and others from our wonderful origami community are working hard to bring you an amazing list of special and featured guests! Want to be featured? Review our "Featured Guests" section below to submit your information.

PCOC 2019 is proud to announce the following special guests: 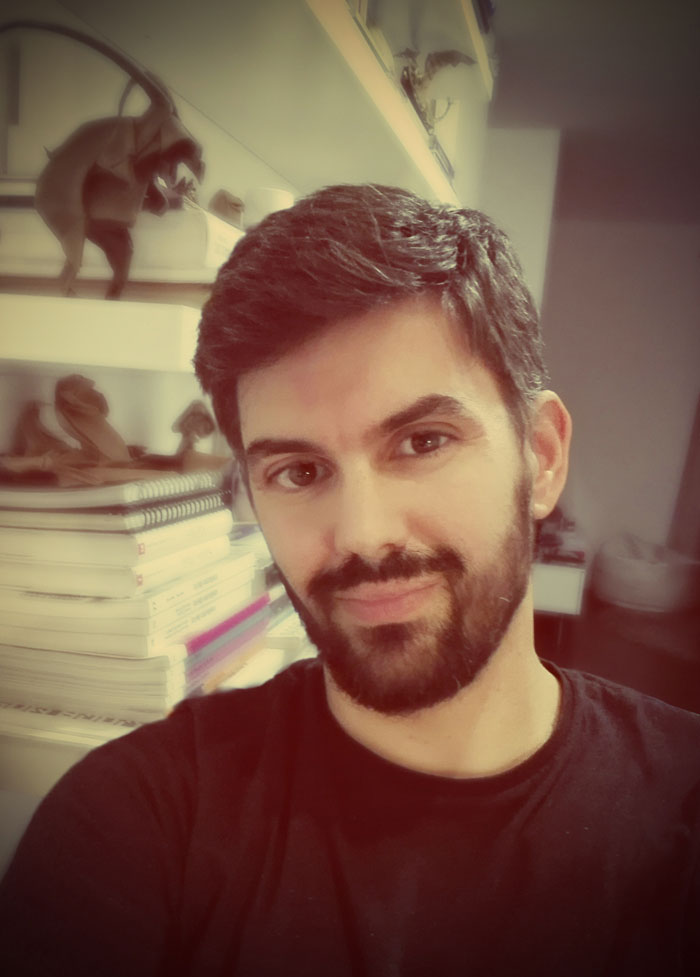 João Charrua was born and brought up in a small town in southern Portugal. At an early age he developed a taste for the arts, especially drawing, studied arts at high school and years later he graduated in architecture. During the initial years of his career he trained and worked with a number of senior architects at several studios. He now has his own studio. It was out of mere curiosity that João Charrua first took up origami, which developed into an absorbing hobby and later a serious undertaking. He sees origami as a complementary activity to his profession, essentially as a means whereby he can freely express his creativity. He is passionate about illustration and everything to do with fantasy and the fantastic from which he draws most of the inspiration for his works. Don't be surprised if you catch him daydreaming - it's just his prolific imagination at work. In his free time, he enjoys the small pleasures of life, drawing and playing with his children.

Here are two great articles about João and his designs: 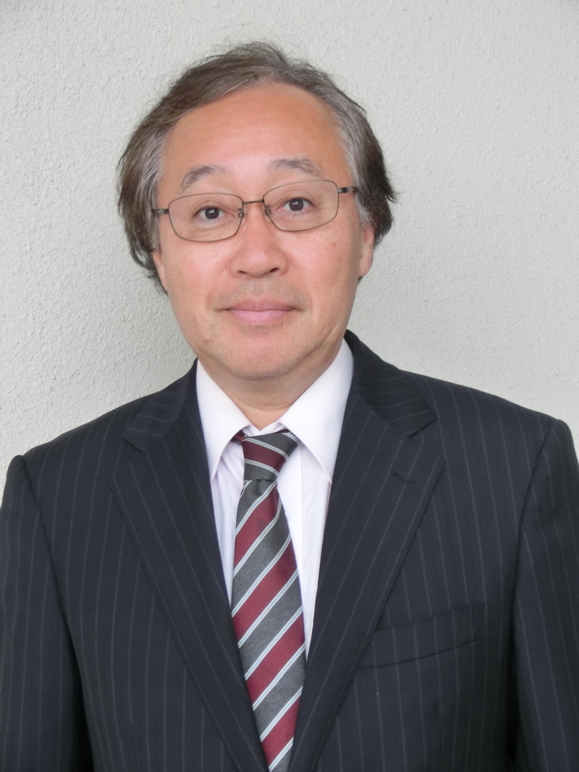 Toshikazu Kawasaki was born in Fukuoka, Japan in 1955. He acquired his PhD in Mathematics with his paper crane deformation theory and became the world's first "Origami Doctor." He is a mathematics professor as well as an origami artist. He is particularly famous and highly acclaimed for his series of rose models.

Dr. Kawasaki has been an artist-in-resident in Brazil, Ukraine, as well as Bosnia and Herzegovina, sponsored by The Japan Foundation. He has also been invited by various origami societies to teach in U.K., U.S., Spain, Germany, Hungary, and India.

His masterpiece, Cherry Blossom Ball, has become a tribute to the Crown Princess of Japan, Masako.

The Origami Always Succeed (OAS) is a group of four designers from Spain that like to keep the folding atmosphere fun and ever-changing with new ideas and challenges for each other and everyone they meet. They are very social and love to share their enjoyment of paperfolding with folders and non-folders alike.

OAS forgoes rules, but some trends have evolved during their journey together. They hold weekly folding challenges, value complete failure as a learning tool, have a low tolerance for rules, and they enjoy social interactions with everyone, which is why they hold their meetings in bars.

They’re a very fun group of designers, teachers, and friends.

These folks are planning to come to PCOC 2019 to present and/or teach. Are you a designer and wish to let the community know that you will be at PCOC 2019? 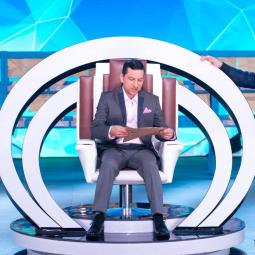 Jared Needle is an origami artist from Los Angeles, California. He specializes in the complex-representational and inside-out styles of origami. His work has been featured on House MD, Superhuman, in commercials for Rotary and Clear, and in galleries around the United States, as well as the traveling museum exhibit Folding Paper: The Infinite Possibilities of Origami.

He is super excited to come to Portland! 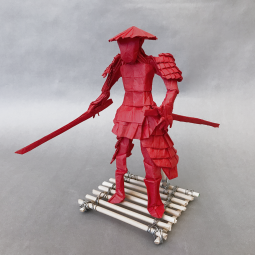 Boice Wong is an origami folder originally from Portland, Oregon. He now resides in Tempe, Arizona and is studying at ASU. Boice is known for his human-figure designs and complex detailing in shaping. His most notable folds are his multiple samurai designs, and his giant complex origami. Utilizing many social media platforms such as Twitch, Instagram, YouTube, Flickr, and Reddit under his alias "OrigamibyBoice", Boice has a passion for connecting the origami community and sharing his knowledge with others. As a Portland native, Boice is extremely excited to see PCOC come to his hometown.

*Be sure to stay updated on his social media as Boice is known to give away origami at conventions. 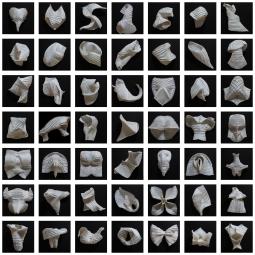 Most of the folds I've ever made have been pleats. I tend to fold sequences of pleats that intersect and interleave to create tension that then forces the paper into a three-dimensional form. This pleat tessellation technique was discovered by Paul Jackson. Sometimes I sculpt the pleated sheet after folding. In addition to folding paper, I've also folded sheet metal and various meshes, as well as used folded pieces as patterns to make metal castings. 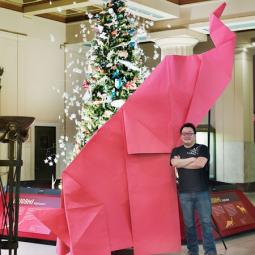 Sok Song’s passion for folding paper has bloomed from a hobby he taught himself from books during his childhood to an award winning origami design business called Creased, Inc. He has traveled all over the world to teach and spread the joy he gets from sharing this wonderful art-form. For over twenty years, Sok has been teaching in schools, museums, and community spaces.

Sok has authored books and has also published and produced 12 issues of a periodical called Creased: Magazine for Paper Folders (www.creased.com). He is the recipient of many awards, fellowships, and grants. Additionally, he has worked with many notable clients, including Condé Nast Publications Ltd., Merrill Lynch, MoMA, Saatchi & Saatchi, The New Yorker, and many more. 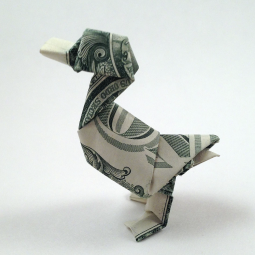 Janessa Munt has been folding for over 15 years, with hundreds of designs to her name. She has authored three books, *The Dollar Bill Origami Book: 30 Designs That Turn Money into Art* and two of *Pokémon Origami*. She is currently working on her fourth origami book which will be released in Summer 2019.

Janessa's models have appeared in advertising and museum exhibits around the world. Additionally, her work has been featured in several convention books, including the annual 2015 Origami Collection by OrigamiUSA. 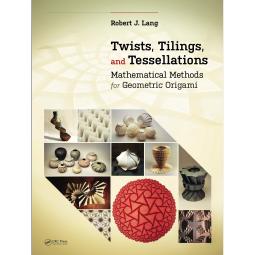 Robert J. Lang has been folding for quite a while. He is the author, co-author, or co-editor of 21 books, including his latest, "Twists, Tilings, and Tessellations: Mathematical Methods for Geometric Folding." 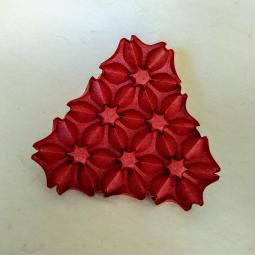 Winnie Leung, from Sydney, Australia, has been folding paper since primary school. She only took up designing origami in the last 5 years, after an inspiring conversation with Ilan Garibi at 6 OSME in Tokyo. Her designs are mostly tessellations, both hand-gridded ones and more recently, curve based one with help from a hobby CNC cutter. PCOC will be her first US convention, and she is really looking forward to catching up with old friends and making new ones! 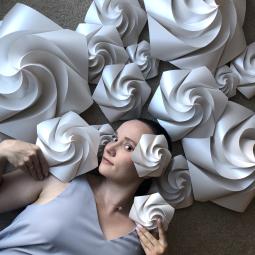 Ekaterina Lukasheva is a contemporary origami artist. She is known for breathtaking curved fold origami tessellations and spectacular modulars. Her publications on modular origami include: "Floral Origami" (2018)", Modular Origami Kaleidoscope" (2016), "Modern Kusudama Origami" (2015), and "Kusudama Origami" (2014). She has been a frequent guest of honour at many origami conventions. 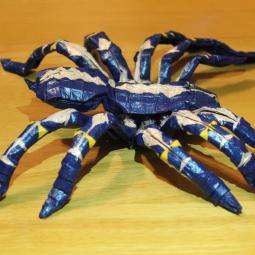 Jonathan Hirschberg is an experienced origami creator based in the San Francisco Bay Area, California, USA. He focuses on creating complex and super-complex representational origami models mostly of animals, vehicles, and fantasy characters. He strives to capture the essence of each subject with a high degree of fidelity and detail. His work has been published in convention books for Origami USA, Tanteidan, and others. 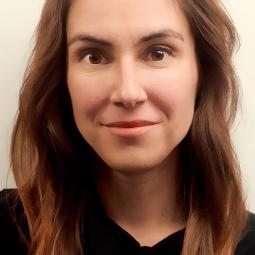 Beth Johnson is an origami artist from Ann Arbor, Michigan. She has been folding paper for many years, and began designing her own models in 2010. Her designs are mostly representational figures from the natural world, which is a huge source of inspiration for her work. She is also drawn to patterns and likes to incorporate tessellations and corrugations into her models in unique and interesting ways. Her work is currently being exhibited in museums and galleries in the US and overseas, and she has been invited as a special guest to several origami conventions. 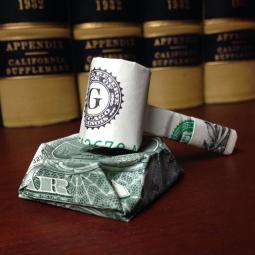 Glenn Sapaden is an origami enthusiast from Sacramento, California. As an attorney, Glenn transformed long hours waiting in court into valuable origami folding time.
Glenn specializes in dollar origami, to the delight of taxi drivers, waiters and waitresses, and hotel staff around the world. He designs dollar folds and delights in how a dollar’s features that can be creatively incorporated into each model.
Glenn has taught origami at PCOC, at the East Bay Origami Convention, and with the Davis Origami Group. 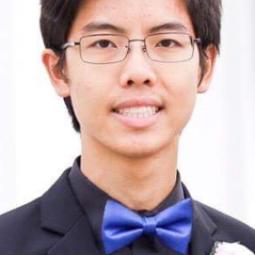 Kevin Li is an origami enthusiastic who now resides in Silicon Valley. He is a senior in high school. Last summer, he conducted research related to soft robotic grippers inspired by origami/kirigami patterns at Boston University for 6 weeks. He hopes to share out his findings and innovations to the public in order to demonstrate the many fields that origami can be applied to. Kevin has been folding origami ever since he was a toddler, and he enjoys folding models in his spare time. Through presenting his research and sharing some models, Kevin hopes to highlight the intersection between science and art.